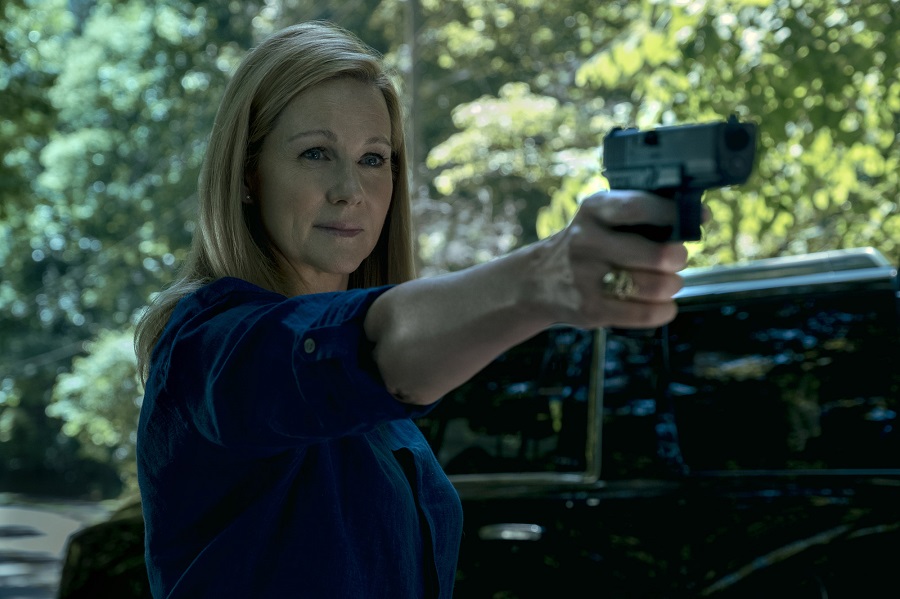 ‘Kevin Cronin Was Here’, the third episode of the season, brings back the looming sense of death on the Byrde family, most of all Marty. He has been failing on both personal and professional fronts, and while he does get a glimpse at another way out from the life that he is stuck in, it looks like he might not make it to the door. The episode turns up the tension another notch. With too many things already on his plate, the chances of Marty’s survival diminish further as his wife develops a peculiar relationship with the cartel leader. By the end of it, Marty will have to make a choice about how he wants to go forward with everything.

Wendy has a dream. In it, she goes back to the day she met with Cade Langmore the last time. Only in the dream, it is not Cade, it is Marty. It is him that she gives half-a-million in a bag, and it is him she asks to leave. She also blocks him on the way and shoots him to death. She wonders if she really means the same for her husband when they are not in the dream, and Marty tries to figure out another way to launder the money since the FBI has started auditing Missouri Belle. He puts the blame of it on the new casino deal that Wendy had finalised, by hook or by crook, but clearly, it is related to the arson in the casino across the river.

FBI Agent Maya Mills starts overseeing the operations at the casino and offers a different deal to Marty. Meanwhile, Helen starts to wonder if Marty is as important for the operation as he used to be. She pays a visit to Ruth and asks her if she would be up to the task of running Missouri Belle on her own, in case Marty was indisposed.

Has Marty Bryde run his course? This is the question that the third episode of the season focuses on. The only reason Marty has escaped the wrath of the cartel is because he has proved himself to be useful. He would have been killed the day Del caught his partners stealing cartel money, but because he quickly came up with a plan and then saw it through to the end is what impressed his employers. The sole reason that they agreed on the idea of a casino, despite it sounding completely ridiculous, was because he was the only one who could pull it off. He was the only man for the job and neither the cartel, nor the Snells, or anyone else would have been able to do what he did.

Now, however, he has come to a standstill. Now that the casino is working, it only needs someone who can take care of the day-to-day. If a new idea needs to be implemented, Wendy can work just as well as, if not better than, Marty. It would be an inconvenience to let him go without a reason, but Marty has given them enough reasons now. Not only did he try to sabotage the plan for the new casino, but he also put the current one at stake. On top of that, he was listening in on Wendy’s calls, which would be reason enough for Navarro to believe that he was spying on them because of the FBI.

While Wendy wouldn’t want her husband to die, she does dream about killing him. Their marriage has been rocky lately, and him trying so hard to stop her has certainly unnerved her. He is on a completely different path now. In fact, if the cartel does decide to kill him, she could be the only one who can bargain for his life. This poses a lot of problems for Marty. His life has been on the line since the beginning of the show and he is no stranger to getting kidnapped or tortured or having a gun pointed to his head. This season, however, it feels ominous. Perhaps, we should prepare ourselves for saying goodbye to him after all. It was never going to end well for him anyway.