Who Is Patti Blagojevich? 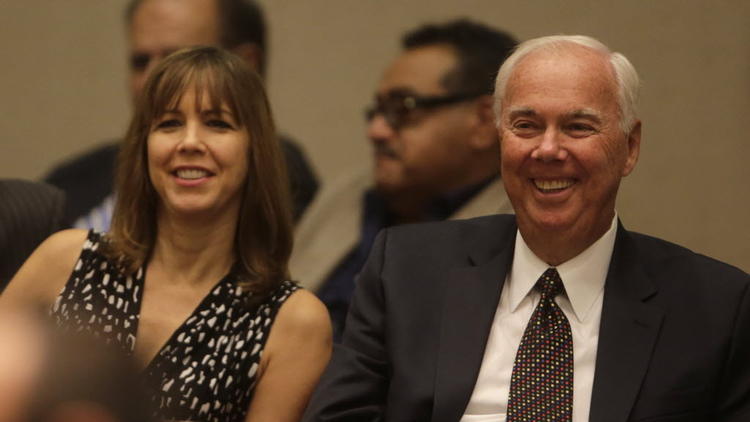 Netflix’s ‘Trial By Media’ proves to be an insightful docu-series that portrays the destructive effects of media. It does so by presenting multiple legal cases that received high amounts of media coverage and how that might have led to alteration of justice. Some of the episodes can be genuinely disturbing, but the show always makes viewers ponder. It frequently makes it tough for the viewers to “pick a side,” making them mull over the harmful effects of tabloid excesses.

The final episode of the series revolves around the former governor of Illinois, Rod Blagojevich. Blagojevich was impeached and imprisoned for 14 years for attempting to “sell” a Senate seat that was vacated after Obama became President. Two other characters: Patti Blagojevich and Dick Mell also appear in the episode notably. Who are they?

Patti Blagojevich is the wife of Rod Blagojevich. She appears at the start of the episode sharing how she did not leave her husband’s side despite the tough circumstances. Moreover, it is Patti who appeals to President Trump on national television: something which causes her husband’s sentence to be commuted.

Patti was born Patricia Mell to the influential Chicago politician, Richard “Dick” Mell. She graduated from the University of Illinois with a bachelor’s degree in economics. She went to school at Saint Scholastica High School. Apart from her political connections, she had supported Rod Blagojevich during his political campaigns immensely. Furthermore, Rod also appointed her to serve on the Department of Children and Family Services Task Force. “The task force was charged with assessing the state’s system of managing child welfare needs and goals” (source).

Rod has two daughters: Amy and Annie Blagojevich. According to reports in 2017, Amy was studying at Northwestern University, Annie was still in high school. Both the girls have remained close to their father. In fact, when Barack Obama declined to commute her father’s sentence, Amy wrote a scathing post on Facebook criticizing the former President, ”

Everyone seems to be mourning your exit from office. I’m glad you’re gone. I’m not delusional — you’re not a saint. You were a mediocre president with unoriginal ideas. I thought you would finally right this wrong. You didn’t have to pardon him, only commute the sentence. You just had to let him come home. You didn’t. You released others, like Chelsea Manning or FALN terrorists, who actually committed reprehensible crimes, but you failed to release an innocent man.”

Who is Dick Mell?

Richard “Dick” Mell is Patti’s father and Rod’s father-in-law. He played a significant role in the rise of Rod Blagojevich. It is safe to say that without him, Rod would have never risen as fast he did. He is an influential Chicago politician and served on Chicago City Council from 1975 to 2013. After his retirement, his daughter, Deb Mell, replaced him.

However, Mell was born and raised in Muskegon, Michigan. He moved to Chicago after meeting Marge: a woman who would become his wife. After opening a spring manufacturing company, Mell became active in the city’s political sphere. He actively worked in the 33rd Ward Regular Democratic Organization and with community organizations such as the Fraternal Order of Eagles, the Logan Square Neighborhood Association, and Logan Square Lions Club.

In 1975, Mell became the Ward Alderman. During his second term, he was elected the Vice Mayor of the City of Chicago and served in that position from 1979 to 1987. Moreover, Mell was also involved in the infamous “council wars” of the 80s. Basically, there was a legislative gridlock due to the opposition of Mell’s group, the all-Caucasian “Vrdolyak 29” against then-Mayor Harrold Washington, an African-American. Chicago became known as “Beirut on the Lake” because of that, and Mell’s group would vote down all of the Mayor’s proposals. You can read more about the “council wars” here. (Featured image credit: Michael Tercha/Chicago Tribune)