Plufl Beds Shark Tank Update: Where Are They Now? 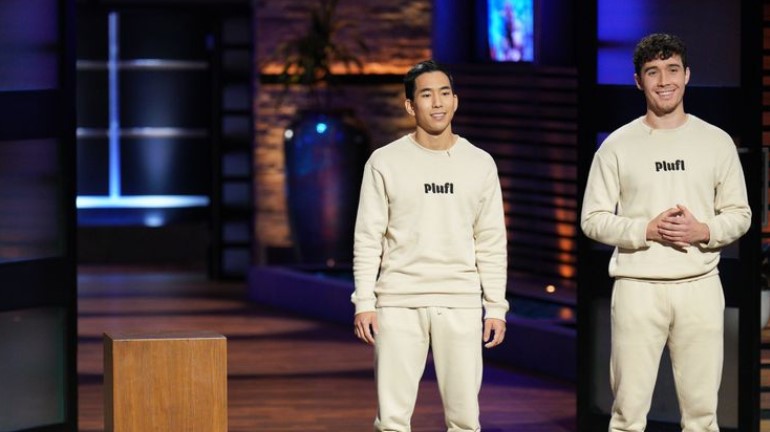 It is common knowledge that with the hectic schedules college students lead, they need to take naps wherever and whenever possible. However, sleep is quite sensitive for some, and most people can’t just drift off in uncomfortable places. Entrepreneurs Yuki Kinoshita and Noah Silverman faced a similar issue before coming across a dog who was napping peacefully on a dog bed.

Witnessing the scenario, Yuki and Noah hit upon the idea of Plufl, dog beds for humans, which are easy to carry and comfortable to use. While the concept was quite innovative in itself, their appearance on ‘Shark Tank’ season 14 episode 5 made viewers interested in the product. Well, here’s everything we know about Plufl, along with its growth since appearing on the show!

Plufl: Who Are They and What Do They Do?

Noah Silverman completed his Associate of Science Degree in Mathematics from Seattle Central College in 2018 before joining The University of British Columbia, where he pursued a Bachelor’s Degree in International Economics. Noah earned his Economics degree in 2022. By then, he had gained ample experience by interning at several prestigious organizations, including Adventure Travel Trade Association and The Wilson Center. He was also on the Board of Directors at Bike Works and worked as a Business Development & Strategy Analyst at Talentspace.

Similarly, Yuki Kinoshita completed his High School diploma from St. Albans School before joining The University of British Columbia for a Bachelor’s degree in International Economics. He was in the same batch as Noah and managed to get several internships under his belt, including stints at Charles River Associates, the Association of Family Offices in Asia, Criterium Group, and Accenture. Additionally, he worked as a Carbon Trading Research Assistant at the Norman B. Keevil Institute of Mining Engineering, and along with Noah, Yuki was a Labs Batch 8 Founder at the League of Innovators.

Plufl was established in September 2021, when both Noah and Yuki were still in college, and at present, the pair involves themselves in the day-to-day operations of the company. Noah and Yuki met while studying at The University of British Columbia and became fast friends. Although they did not have plans to start a business initially, their sleeping habits pushed the idea of Plufl into their heads. Being students, Noah and Yuki would often take multiple naps during the day. Since their dorm was pretty far away from their classes, the pair often looked for quiet and comfortable places to sleep on campus.

However, such places were extremely rare, and sleeping in an uncomfortable area often made Noah and Yuki more tired. Surprisingly, while looking for a solution to this problem, the friends noticed a dog sleeping peacefully in a dog bed at their local college cafe. That’s when they hit upon the idea of Plufl. After testing the product for themselves, the pair were certain that it would plug a huge gap in the market. At its core, Plufl is a large dog bed made for humans, which is highly comfortable and portable.

The products are made from orthopedic memory foam and lined with faux fur, which adds to the comfort. A fluffy border, which doubles as a pillow, runs around the Plufl, while Yuki and Noah mentioned that the Plufl’s shape helps in comfortable sleep. Moreover, with the entire product being easy to carry, the user can put down the Plufl anywhere they please before curling up and going to sleep inside of it. The founders even claimed that the shape of the Plufl and the comfort it provides helps in soothing people who live with ADHD or anxiety-related issues.

Although Noah and Yuki began working on Plufl in September 2021, it took them a few months to perfect their design and develop a satisfactory prototype. They eventually locked the design in by May of 2022 and subsequently launched a Kickstarter campaign which has raised around $290,657 to date. They even launched an Indiegogo campaign and are quite diligent about providing updates to their backers. At the time of writing, the first batch of Plufls has not been sent out, and the product is only available as a pre-order.

However, reports state that beta testers had nothing but praise for Plufl, and the people backing it have something exciting to look forward to. Besides, the pair also embraced social media marketing, and their product got a lot of traction once the commercials went viral on TikTok. Currently, apart from backing the company on Kickstarter, interested customers can pre-order Plufl from their official website, where the bed comes in two colors and will set one back by $499.

Those interested in the products will also be happy to know that Noah and Yuki have already started mass production and are planning to fulfill their first set of orders by November 2022. The success story of Plufl is incredibly inspiring for aspiring entrepreneurs, and we are confident that the company will witness further success in the near future.