Pretty Rugged Blankets Shark Tank Update: Where Are They Now? 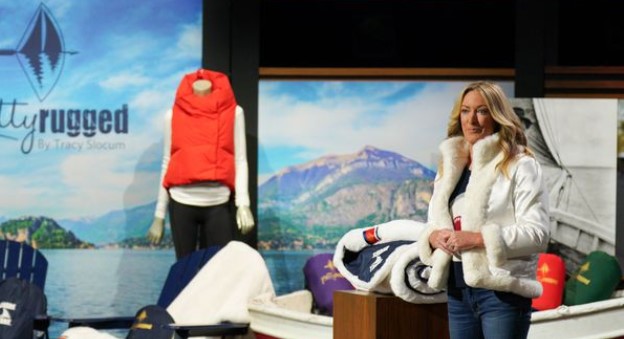 Finding the perfect blanket has always been a challenging choice for customers. Most of the time, users have to compromise on either fashion or comfort, and finding a perfect combination of the two is seemingly impossible. Entrepreneur, Tracy Slocum, faced the same issue when she and her family were boating in Upstate New York in the fall. Realizing that the current market did not have a solution to the problem, Tracy designed her own blanket before starting her company, Pretty Rugged.

Pretty Rugged claims to market products that are both functional and fashionable, and viewers grew interested in the company once Tracy appeared on ‘Shark Tank‘ season 14 episode 5. If you are someone who is curious to know more about Pretty Rugged, fret not because we have you covered.

Pretty Rugged: Who Are They and What Do They Do?

Tracy Slocum, the brain behind Pretty Rugged, completed her Bachelor of Science in Psychology with a minor in Biology from Le Moyne College in 1996. Following her education, Tracy started working in Pharmaceutical Sales and soon managed to make a name for herself in her field. However, about nine years after joining the industry, Tracy was compelled to leave in order to take care of her children. Yet, unwilling to let her professional career remain stagnant, Tracy started her own company, J. Slocum, in October 2013, under which she opened an award-winning specialty food store.

A post shared by Pretty Rugged by Tracy Slocum (@prettyruggedshop)

Moreover, Tracy was also involved in the production and development of clothing lines as well as sourcing and developing products from around the globe. The idea of Pretty Rugged came to Tracy in 2016, and she managed to launch the company in 2017. Subsequently, as Pretty Rugged gained traction and became pretty popular, Tracy even sold her specialty food store to focus on her new business full-time.

On the show, Tracy mentioned that she and her family love boating on New York State’s Lake George during the summers. In fact, they love the activity so much that they try to extend it into the fall season as much as possible. However, even early fall days in Upstate New York are quite chilly, and the family has to deal with multiple rainy days, which ruins the experience. Hence, Tracy was on the lookout for blankets that would look pretty and keep them warm as well as dry at the same time. Her search took her everywhere, including local markets, niche shops, and online.

However, Tracy was unable to find a blanket that she liked. The ones she found pretty were extremely uncomfortable, and the ones made for use in the rain compromised heavily on fashion. Still, as Tracy was involved with the development of clothing lines, she knew quite a few designers and decided to get in touch with them for a customized blanket. She even heard stories about her great-great-grandfather, Captain Joshua Slocum, who was the first man to sail around the world alone. Captain Joshua was known for using blankets and coats made of fur to keep himself warm; Tracy drew inspiration from the same.

Therefore, once the time came, she collaborated with designers and created a perfect blanket lined with comfortable faux fur on one side and RuggedTex fabric on the other. Tracy describes RuggedTex as a nylon material that is waterproof, weather-proof, wind-proof, and spill-proof. Furthermore, the blanket has a waterproof zipper on the side and can also be used as a mat for picnics. Once the blanket was completed, Tracy took it everywhere and received compliments from friends and strangers alike. That was when she realized that her invention had massive business potential and launched Pretty Rugged.

Where Is Pretty Rugged Now?

Pretty Rugged Blankets were received quite favorably upon their launch in 2017, and the positive response encouraged Tracy to innovate further to add more products to her catalog. Sources mention that while trying to increase her customer base, Tracy would travel to trade expos, events, and fashion shows outside of New York, where people had nothing but praise for her blankets. The blankets are marketed as machine-washable multipurpose products perfect for outdoor events like picnics and tailgating. Tracy mentioned that she has sold over 30,000 units to this day.

A post shared by Pretty Rugged by Tracy Slocum (@prettyruggedshop)

In the year following its launch, Pretty Rugged won prizes in the categories of “Best in Market” and “Best New Product” at NY Now. In the same year, the blanket was also included in Oprah Winfrey’s Favorite Things List, propelling the product into the spotlight and boosting Pretty Rugged’s customer base. Apart from the original blanket, Tracy has introduced a bunch of new products, including bomber jackets and wearable blankets. She even started using a new material called SatinTex, which was introduced in the Collins Capelet, a jacket that can be worn casually or as a part of eveningwear.

Moreover, another of her products, the Blakely Reversible Faux Fur Bomber, won a prize in the “Best New Product” category at NY Now in 2019. Besides, in March 2019, Pretty Rugged and its products were featured on ‘Good Morning America,’ soon followed by several features on other popular TV shows and publications, further increasing their reach. At present, Pretty Rugged is considered a multi-million dollar company, although Tracy wants to become a household name in the United States and even has plans to expand overseas.

Those interested can avail of the products from Pretty Rugged’s official website, with most prices ranging between $60 to $300. The company also offers bundle discounts, and people interested in shopping offline can find the brand present in numerous brick-and-mortar stores around the United States. With $8 million in total sales, Pretty Rugged has an inspiring success story, and we are confident that the company will reach greater heights in the future.