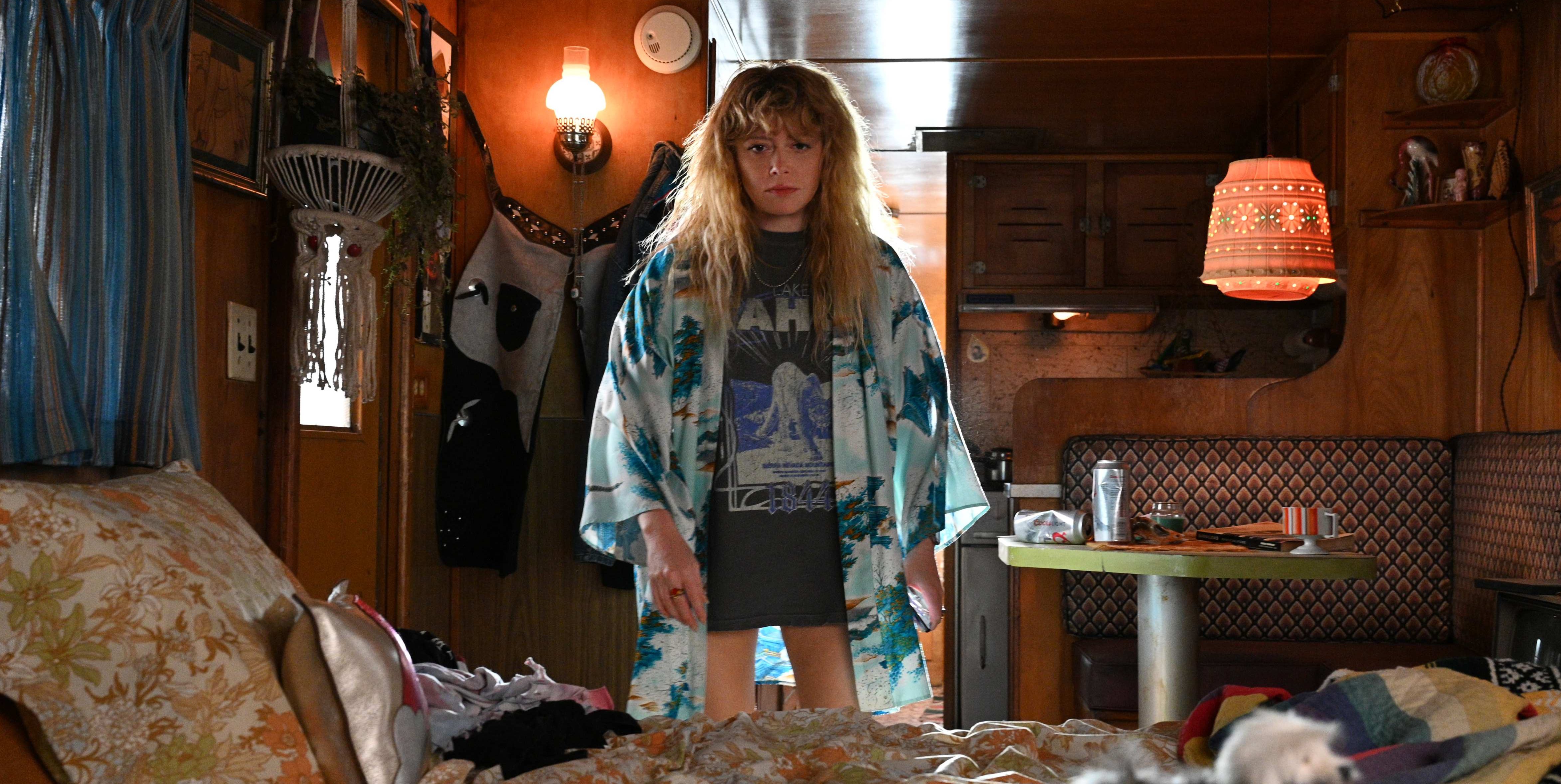 Created by Rian Johnson, Peacock’s thriller series ‘Poker Face’ revolves around Charlie Cale, who possesses the unbelievable ability to see through anyone’s poker face to identify the lies one says. The first episode of the series, titled ‘Dead Man’s Hand,’ follows Charlie’s encounter with her boss Sterling Frost Jr., who learns all about her special skills from his retired businessman father. Charlie and Sterling join hands for a significant mission but the same turns out to be life-threatening for everyone involved when she tries to unravel the mystery around the death of her friend Natalie. The episode ends with astounding developments, one after the other. If you are intrigued about the same, let us share our detailed take on it! SPOILERS AHEAD.

‘Dead Man’s Hand’ begins with Natalie, a housekeeper working at Frost Casino, getting stunned by seeing the laptop screen of a guest named Kazimir Caine. She takes a photo of whatever she has seen on the screen and shows it to her superior Cliff, who contacts Sterling Frost Jr., who runs the casino. Meanwhile, Sterling is meeting Charlie frequently regarding a mission. Sterling knows that it is impossible to bluff in front of Charlie and she can easily win any poker game by identifying the “tells” of each player. Sterling wants Charlie’s expertise to bring down Caine, who has been arranging private poker games in his suit.

Since Caine is an important client of the casino, Sterling does not want his employee to cause any trouble. He instructs Cliff to kill Natalie and her abusive boyfriend Jerry and pin her murder on the dead partner by staging his murder as a suicide. Sterling chooses a player to take part in Caine’s poker games, which will be happening in his suit filled with cameras installed by the casino boss so that Charlie can watch the game and inform their player about the bluffs. As Sterling looks forward to the same, Natalie’s death severely affects her best friend Charlie, who goes to the sheriff’s office to learn more about her death.

Although Charlie is familiar with the tumultuous relationship between Natalie and Jerry, she cannot believe that Jerry killed her friend and then killed himself. Her persistence to know the truth about her friend’s death leads her to the county sheriff, who makes it clear that he cannot show her any evidence they collected from the crime scene. Still, she manages to see a photograph in which the murder weapon is in Jerry’s right hand. Charlie’s suspicions concerning the deaths grow since Jerry is a left-handed man. The photograph becomes the first piece of the puzzle and the increased suspicion leads her to Natalie’s belongings, in which she finds a tablet.

Using the help of a co-worker, Charlie opens the tablet and sees the photo Natalie took of Caine’s laptop screen. She theorizes that Caine killed Natalie for taking the photo and brings the same to Sterling, who dismisses the theory. During their conversation, Charlie realizes that Sterling is hiding “something” and to find out about the same, she recollects the day Jerry came to the casino with a gun to threaten Natalie. While going through the security footage, she realizes that Jerry left the casino without the gun since he passes the metal detector without any red alert. She soon comes to know that Cliff has taken his gun away.

Charlie has worked in Frost Casino enough to know that Cliff doesn’t move an inch without the order of Sterling or whoever assumes the boss’ office for that matter. Thus, she confronts Sterling and Cliff about the two deaths. Since Sterling knows that it is futile to lie to Charlie, he admits to ordering the two murders.

Why Does Sterling Frost Jr. Kill Himself?

Even when Charlie finds out the truth about Natalie and Jerry’s murders, he doesn’t feel threatened. He knows that Charlie cannot harm him by going to the authorities since he more or less “owns” the entire county named after his family. But Sterling doesn’t realize that Charlie is aware of his potency as much as he is aware of the same. Rather than going to the authorities, she records Sterling’s elaborate plan to bring down Caine and sends it to the businessman. Caine realizes that he is on enemy land and departs from the casino. Along with Caine, almost all of the VIP clients of the casino leave the establishment since they cannot trust Sterling anymore.

When Sterling’s father retired and handed over the casino to him, he wanted to prove to his father that he is capable of expanding their wealth and authority. While growing up, he might haven’t been able to come out of his father’s shadows and now that he does, he aims big. Bringing down Caine was only a part of Sterling’s plan to outdo his father. When Caine and other pivotal clients of the casino disappear from the place, Sterling realizes that he has ended up being a failure. He knows that a casino is nothing if it doesn’t cater to the wealthiest and most powerful, who can come to the establishment trusting the man who runs the same.

Since Sterling cannot regain the trust of his clients, he realizes that he and his casino are doomed for good. As the final nail in the coffin, his father calls him to remind him how much of a failure he is. Sterling doesn’t want to live the second half of his life as a failure and chooses death over the former option.

When Sterling Frost Jr. kills himself, Charlie realizes that her life is threatened for good. Cliff tries to kill her and she succeeds in escaping him. As she runs away from Cliff, the casino boss’ father Mr. Sterling calls her to threaten her. Although Sterling Jr. turns out to be a “failure,” he was still Mr. Sterling’s son and he doesn’t tolerate that Charlie’s actions paved the way for his son’s death. When Charlie was a wanderer, who considered casinos as shelters, it was Mr. Sterling who brought her to his casino for her to build a new chapter of her life.

As far as Mr. Sterling is concerned, Charlie repaid him with the death of his son Sterling Jr. and he wants to put an end to her life as an act of vengeance. He orders Cliff to track down Charlie and bring her to him. Although killing himself was the casino boss’ choice, his father wants Charlie to have the same fate for putting his son in such a position.

Read More: Is Peacock’s Poker Face Based on a True Story or a Book?