Developed from a manga series written and illustrated by Negi Haruba, ‘The Quintessential Quintuplets’ or ‘Go-Tōbun no Hanayome’ is a slice-of-life romance anime. It tells the story of the identical quintuplet Nakano sisters and how their lives change after meeting the academically-gifted Futaro Uesugi. While it is essentially a harem anime, the show cleverly subverts all the genre’s familiar tropes. The first season of the anime premiered on January 10, 2019, and concluded on March 28, 2019. Season 2 (written in the stylized form ‘The Quintessential Quintuplets ∬’) started airing on January 8, 2021. Here is everything you need to know about its upcoming episode.

‘The Quintessential Quintuplets’ season 2 episode 10, titled ‘Five Cranes in Return,’ is set to premiere on March 12, 2021. Bibury Animation Studios produced the sophomore season of the anime after taking over from Tezuka Productions. Satoshi Kuwabara directed the first season, with Keiichirō Ōchi serving as the main writer. While Ōchi returned for the second season, the show acquired a new director, Kaori. Hanae Nakamura and Miki Sakurai provided the score. The Nakano Family Quintuplets, a group made up of the 5 voice actresses portraying the quintuplets, sang both the opening theme track “Go-Tōbun no Katachi” and the ending theme track “Hatsukoi.”

In episode 9, Ichika tells her four sisters that they all need to find jobs as from next week, the rent will be split five ways. If one of them isn’t able to pay, she will be sent back to their old apartment. Both Nino and Miku apply at Revival, the dessert shop where Futaro works. Revival’s manager tells the girls that there is only one position available. When the sisters start fighting, he dumps the recruitment responsibility on Futaro’s shoulders and flees. Eventually, on Miku’s insistence, there is a bake-off, and Miku, who has significantly less experience than her sister, loses. However, Miku becomes even more driven by her defeat and gets a job at a dessert shop on the opposite side of the street. 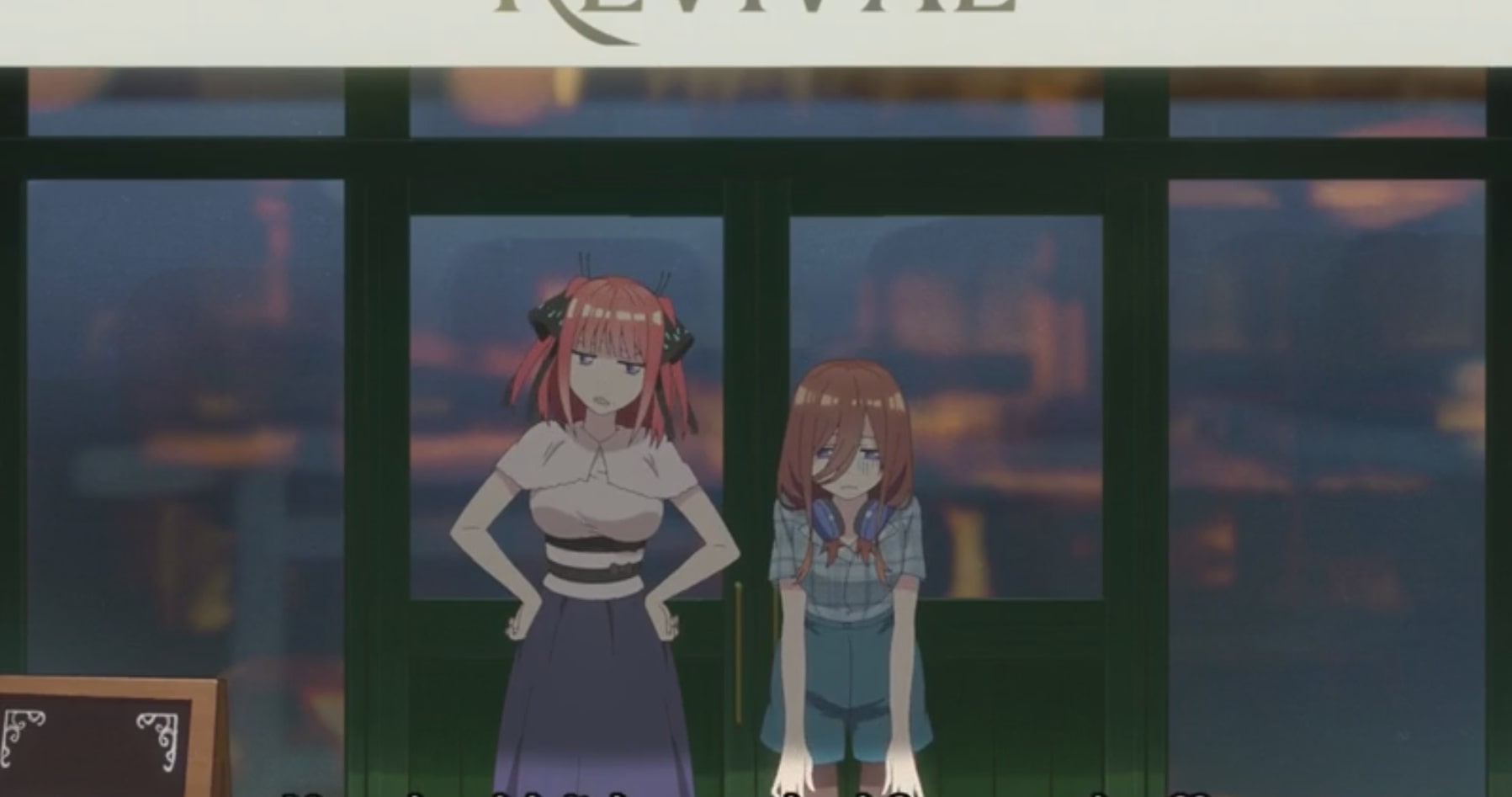 Ichika regularly accompanies Futaro to school. She tells him that Yotsuba has also started working. Futaro and the girls begin their new year at school. Yotsuba volunteers to be one of the class representatives and ropes in a reluctant Futaro to serve with her. On her first day at work, Nino makes a mistake while preparing a cake mixture, and Futaro tries to comfort her in his own awkward way by telling her how many mistakes he has committed at work. He admits to Nino that he has thought that he is only good at studying until she told him that she likes him. They discover that the famous food critic that the manager wants to impress is actually Itsuki. 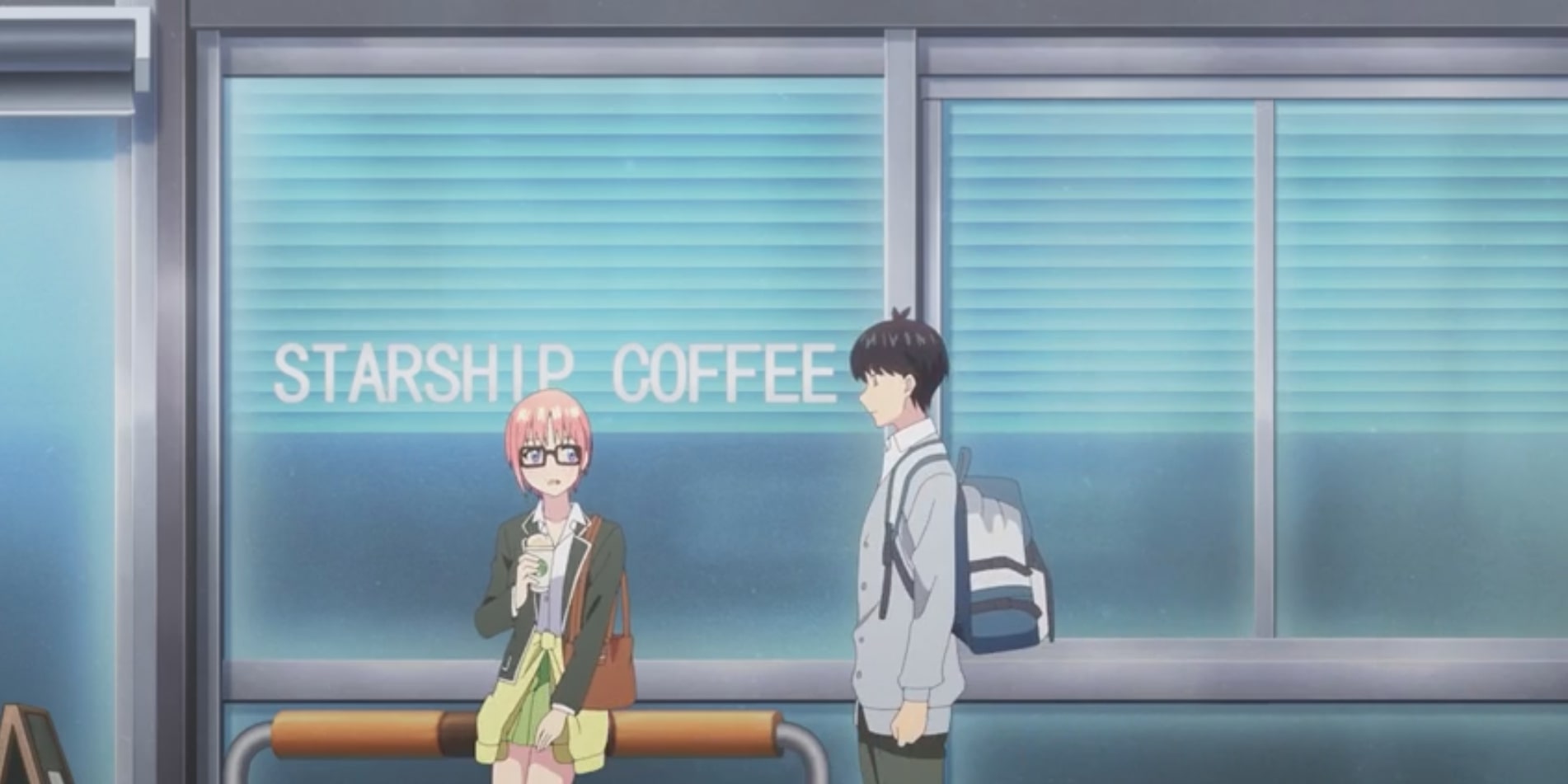 Still struggling with her feelings for Futaro and inability to voice them, Ichika, while pretending to be Miku, tells Futaro that Ichika likes him. In episode 10, the childhood of the Nakano sisters might receive some focus.