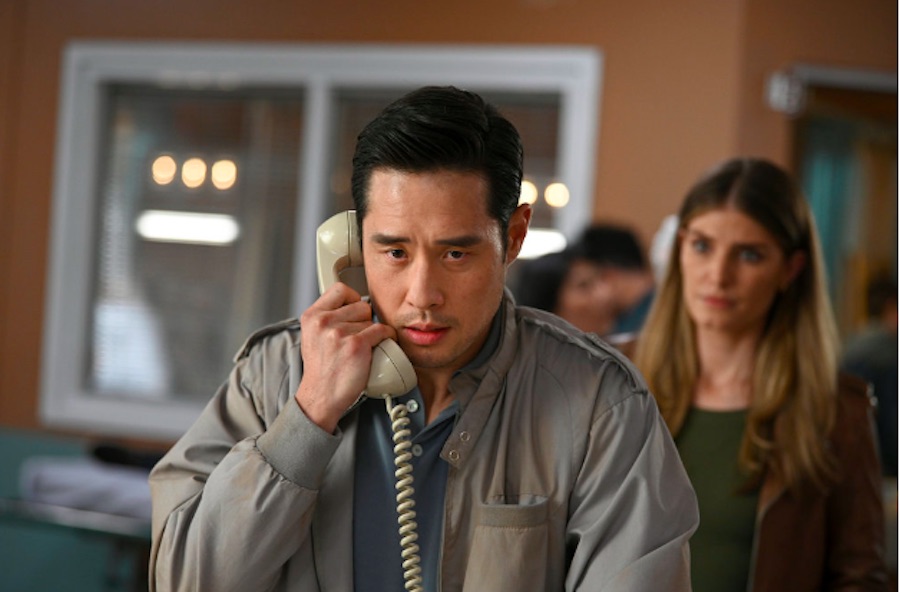 NBC’s sci-fi drama ‘Quantum Leap’ follows the story of Dr. Ben Song who has leaped into the past and has no memory of why he did so and where he intends to go. His team back home, including his fiancee, Addison, is trying to figure out why Ben took such a huge step without telling anyone about it. In the process, they discover that Ben had been keeping a lot of secrets, which makes it very difficult to decipher his intentions behind time travel. In this episode, the scope of quantum leaping extends beyond Ben and a new player comes under the spotlight. What does this mean for Ben’s travels in time? Let’s find out. SPOILERS AHEAD

Ben Song’s next leap takes him to 1989, San Francisco. This is the day of the catastrophic earthquake that led to the loss of a lot of lives. This time, Ben finds himself in a man named John whose marriage is on the brink of collapse. His wife, Naomi, wants a divorce, and it is while they discuss their future that the earthquake strikes. Ben soon finds out that he is there to save the life of John and Naomi’s son, Jason.

When Jason found out that his parents were separating, he went back to their old neighborhood. During the earthquake, that building caved in, and Jason died. Things become personal for Ben when he discovers that Jason and Naomi are not on good terms. As his memories resurface, he relates their relationship to the one he had with his own mother. He feels guilty for keeping his mother at a distance when she was alive, and he doesn’t want the same thing for Jason. He is ready to do whatever it takes to mend things between him and Naomi.

Back home, Jenn, Magic, and Ian figure out the identity of the other time traveler, the Leaper X. It turns out to be a marine named Richard Martinez, but nothing about him suggests that he is connected to time traveling. Not yet, at least.

Quantum Leap Episode 6 Ending: Is Ben Trying to go to the Future?

Despite the secrecy behind Ben’s endeavors, his team had been slowly inching toward some answers. Or so they thought. Ian figured out that Ben’s leaps were not random. In fact, they were timed in a way to give him enough momentum to leap further into the past. This would have helped the team in finding out where Ben was going, which in turn, would give them a context to find out why he went there. However, this changes after the arrival of Leaper X.

Jenn figures that if Leaper X is also time traveling and they are seeing him through the imaging chamber, then much like Ben, he should also appear to them as he is rather than as the person that he has leaped into. Now that they know what he looks like, they run his picture through facial recognition software, and the name Richard Martinez pops up. Jenn and Magic pay him a visit, but it turns out that Martinez has no idea about the Quantum Leap project or time travel.

Considering the entire situation, Jenn proposes three possibilities for their predicament. The first is that some other country has also been developing a time travel project, and Martinez is their leaper. The other is that some private company has been working on it secretly. The third option, which might have seemed far-fetched in any other situation but seems to be the most plausible one right now, is that Martinez has leaped from the future. While Magic and his team might be in charge of the project right now, they have no idea how it will look in the future. They don’t know who will be running things and how many people will have leaped by then. Considering that Martinez hasn’t leaped yet, it could be that he becomes a part of the project in the future.

Until now, the team had been looking at the past and had been focused in only that direction. But now, they realize that one can travel in the future too, and the presence of another time traveler, most probably from the future, indicates that they might have been limited in the way they were perceiving things until now. Ian wonders if Ben’s trajectory is aimed not further into the past but towards the future.

Considering that Ben had made some changes to the program before his leap and the team hasn’t yet figured out what those changes were, they have no way of knowing whether he fixed his destination sometime in the past or the future. If he really is on his way to the future, then it makes his team’s task of figuring out his intentions even more difficult.

For his travels in the past, they had a context of Ben’s life. All the events have already happened and they have all the resources at hand to study a particular day or event and work their way from there. For the future, however, they are completely in the dark. They can’t fathom the reason that would make Ben take such a drastic measure. One thing’s for certain though. It couldn’t have been something good to lead him away from his happy present to an uncertain future.

Read More: When Did Sam Beckett Leap Into Magic? Was Magic in the Original Quantum Leap?