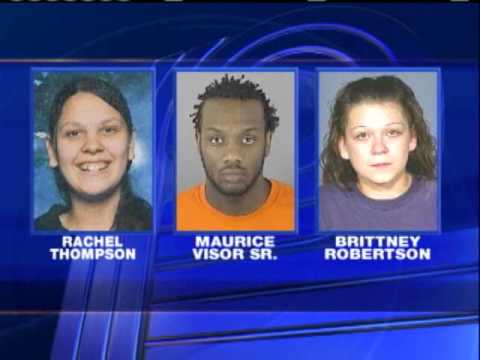 Investigation Discovery’s ‘Ice Cold Killers Winter Blaze’ follows the gruesome quadruple murder of Rachel Thompson, her two infants, and Brittney Robertson in February 2010. While the bodies of the young mother and children were found in Milwaukee, Wisconsin, in February 2010, Brittney’s body was discovered a few hours later. The episode chronicles how investigators caught the perpetrators, taking the viewers chronologically through the chain of events. Here’s what we know if you wish to find out more.

How Did Rachel Thompson and Brittney Robertson Die?

Rachel Marie Thompson was born to Robin Thompson and Jesse Pammaskah on July 25, 1986. Her mother’s boyfriend, Freddy Williams, stabbed her mother, Robin, and grandmother, Laramie D. Thompson, to death in 1993. Rachel was only six and was later adopted by Tom and Tina Thompson. In February 2010, 23-year-old Rachel was a dedicated single mother to her three boys, Torian Thompson-Carter, 4, and Jaden Thompson-Carter, 3, and 6-week-old Maurice Visor Jr.

Rachel and her children were staying in a duplex apartment at the 800 block of S. 12th Street in Milwaukee, Wisconsin, along with her 9-year-old roommate, Brittney M. Robertson. Her uncle, Todd Moreno, said on the show, “She (Rachel) really loved the winters. She enjoyed taking the kids, sledding, and making snow angels. She put her children above everything. Her life was based on giving her children the best life they could possibly have.” According to her family, Rachel was going to school to become a daycare teacher and dreamt of running her daycare.

In the early morning of February 26, 2010, Rachel’s downstairs neighbor heard the blaring fire alarm siren and rushed upstairs to find smoke. He called 911, and the firefighters arrived to find her body. However, they got suspicious when they discovered she had been stabbed; her throat slashed, duct tape around her limbs, and molten plastic on her face. An autopsy report revealed she had died of blunt force trauma and stab wounds.

They rushed inside to find Torian and Jaden’s bodies in the bathtub, bound with duct tape and plastic bags taped over their heads. As per police reports, the two boys had died of asphyxia. The investigators at the crime scene noticed no evidence of forced entry, and about $800 was stolen from the apartment. Surprisingly, Rachel’s roommate Brittney’s corpse was found hours later on the northwest side of Milwaukee. She had been shot in the back of her head at point-blank range with a 9mm revolver.

Rachel’s neighbor told the investigators that Rachel’s infant, Maurice, was missing, along with her roommate, Brittney. Hence, the police immediately issued an AMBER alert and started looking for the missing child. They also flashed Brittney’s face on all major news channels, fearing the perpetrator(s) might have kidnapped the poor woman along with Maurice Jr. As the hours ticked, Rachel’s family began fearing the worst. According to them, she and her boyfriend, Maurice Visor, did not get along well and had bitter arguments lately after she allegedly found him cheating on her.

The officers further learned Maurice was only baby Maurice’s biological father and not of Jaden and Torian, putting him under suspicion. But he was quickly cleared when the police found he was in prison at the time of the murder and had been for three months. Meanwhile, a woman found baby Maurice outside Eastbrook Church, 5385 N. Green Bay Avenue, in Milwaukee, Wisconsin.

Although the church had no surveillance footage that could help the police to identify how the baby got there, a witness notified them she had seen a woman leave in a car shortly before being found. Relieved the infant was alright, the investigators questioned Maurice Sr. to learn a startling truth – Brittney was his ex-girlfriend. Now convinced she might have been involved, the investigators started to track her, only to discover her body a few hours later in northwest Milwaukee.

With two of their most promising leads snuffed, the investigators were at a loss before a tip came in. A Milwaukee hotel manager saw Brittney on the television and called the police to inform them she had checked in at his hotel at around 5:30 PM on February 26, 2010, along with two young African-American males and a baby.

The investigators rushed to the scene to find one of the young men had produced an offender card to sign in, bearing the name Anthony Edward Barnes. Moreover, they found the other man, named Desmond Laster, had signed his name in the hotel registration book. In addition, they viewed the hotel surveillance footage to see the two men leave with Brittney and the baby. The police promptly tracked down Anthony at his brother’s home, and he revealed Desmond’s location for the officers to arrest him too.

Both the men had lengthy prior convictions – Anthony had been convicted of misappropriation of personal identification, disorderly conduct, vehicle operator flee/elude an officer, and driving vehicles without consent. Desmond had been convicted of escape-criminal arrest, cocaine possession, operator flee/elude officer, second-degree recklessly endangering safety, and criminal property damage. While the latter was reluctant to talk, Anthony confessed everything to secure a plea deal.

Where Are Anthony Barnes Jr. and Desmond Laster Today?

According to Anthony, Brittney was reportedly obsessed with Maurice Sr. and was jealous of the victim even after she took her in as a roommate. Thus, she, Desmond, and Anthony went to Rachel’s house and murdered her and her two sons. The trio then fled with the baby and around $800. They left the child at the church after they couldn’t keep him quiet and feared attracting attention to themselves.

With Brittney’s face plastered all over the news, the two men got nervous, and Anthony shot her on Desmond’s orders. Then 23 and 21, respectively, each man faced four counts of first-degree intentional homicide, one count of being a felon in possession of a firearm, and one count of arson to a building. As part of a plea deal, Anthony testified against Desmond and admitted his role in the three murders and the robbery; he was handed 40 years in prison.