Reincarnated as a Sword Episode 1 Recap and Ending, Explained 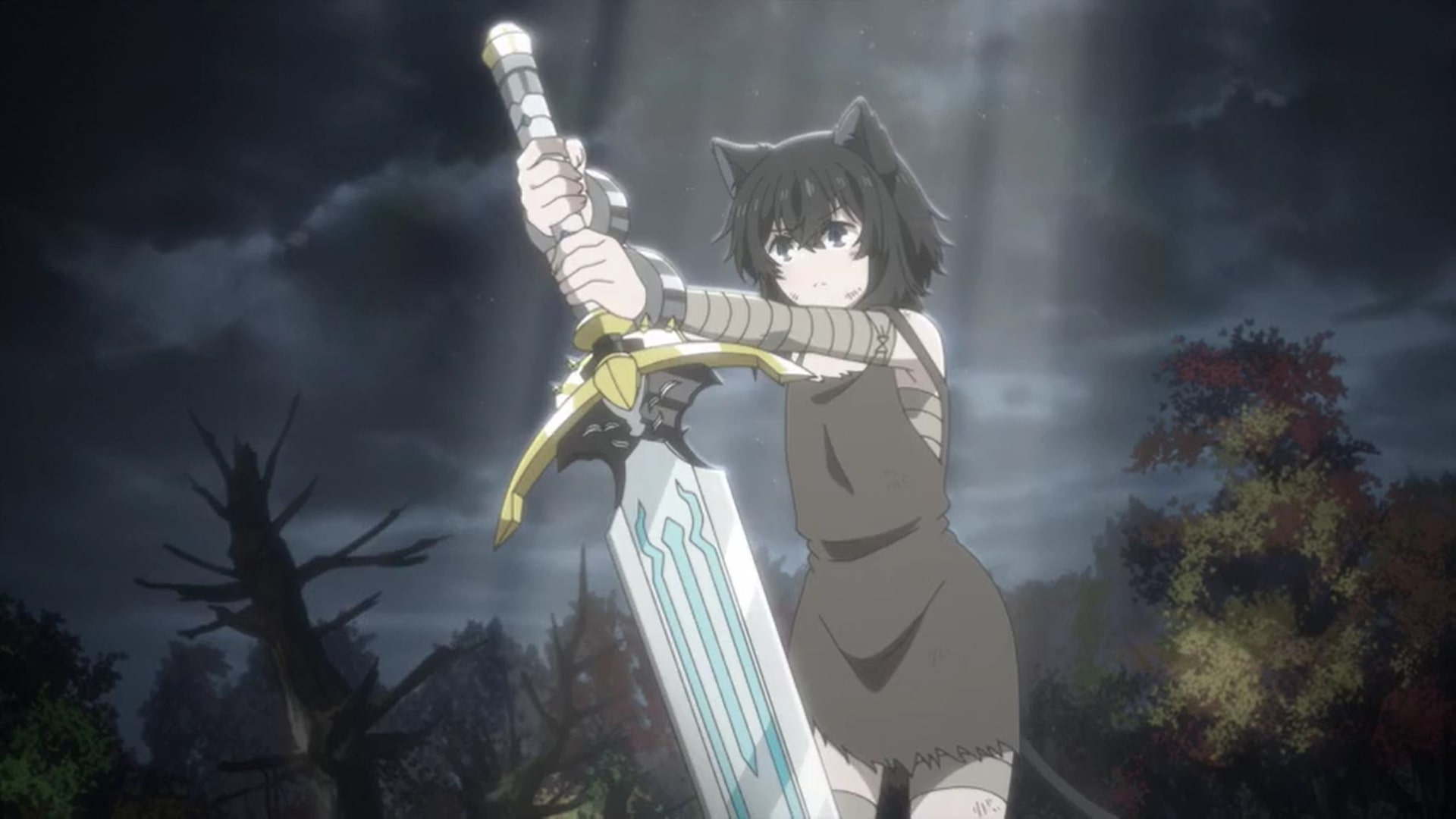 In ‘Reincarnated as a Sword’ or ‘Tensei shitara Ken Deshita’ episode 1 titled ‘Catgirl Meets Sword,’ the show follows a nameless man who gets reincarnated as a sword in an alternate world after dying in an accident. As he kills more monsters, he becomes more powerful in the process by gaining new abilities. Sometime later, he ends up in the hands of an unlikely companion who becomes his wielder. Here’s everything you need to know about the ending of ‘Reincarnated as a Sword’ episode 1. SPOILERS AHEAD!

Reincarnated as a Sword Episode 1 Recap

A nameless man gets hit by a car accident and dies on the spot. But for some mysterious reason, he later gets reincarnated as a sword in an alternate world. As he learns more about his new surroundings, he realizes that he can gain new powers and increase his skills by slaying monsters around him. 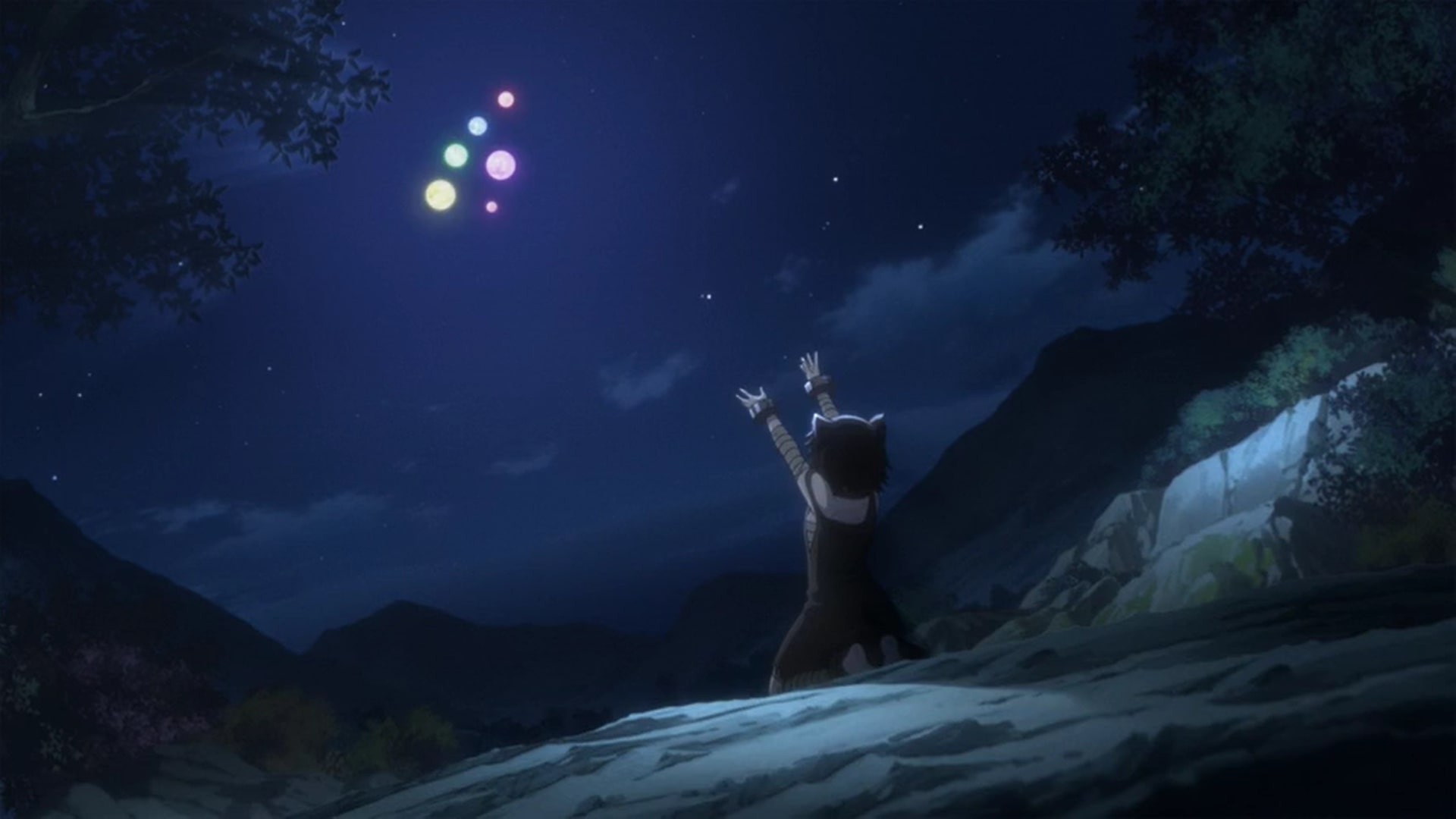 Therefore, he starts using this knowledge to his advantage and slowly becomes more powerful each day. He notices that the further he goes from the place he was reincarnated in, the more powerful monsters he meets. But it also gives him the added advantage to confront dangerous enemies to acquire more influential powers. The magical sword uses this opportunity to explore new regions, becoming more powerful in the process.

However, when he arrives in the Wilted Forest and tries to take a rest, he realizes that he has gotten stuck in the mud and can’t use any of his powers. Elsewhere, a young cat-girl lives a life of misery while working for humans who have enslaved her people. Despite being dehumanized daily, they can’t do much as the neckband and slave contract takes makes them incapable of standing for themselves as they can’t even refuse any orders given to them irrespective of how unreasonable they may be.

Reincarnated as a Sword Episode 1 Ending: How Does the Enslaved Cat Girl Survive the Two-Headed Bear’s Attack?

One normal evening, the humans use carriages to cross the Wilted Forest that carries their luggage and the enslaved cat-people. While the weather is not very pleasant, it becomes the least of their worries, when they realize that they are being followed by a bloodthirsty two-headed bear. Using his brute strength, the beast easily manages to toss the carriage aside, forcing the people to come out of it. 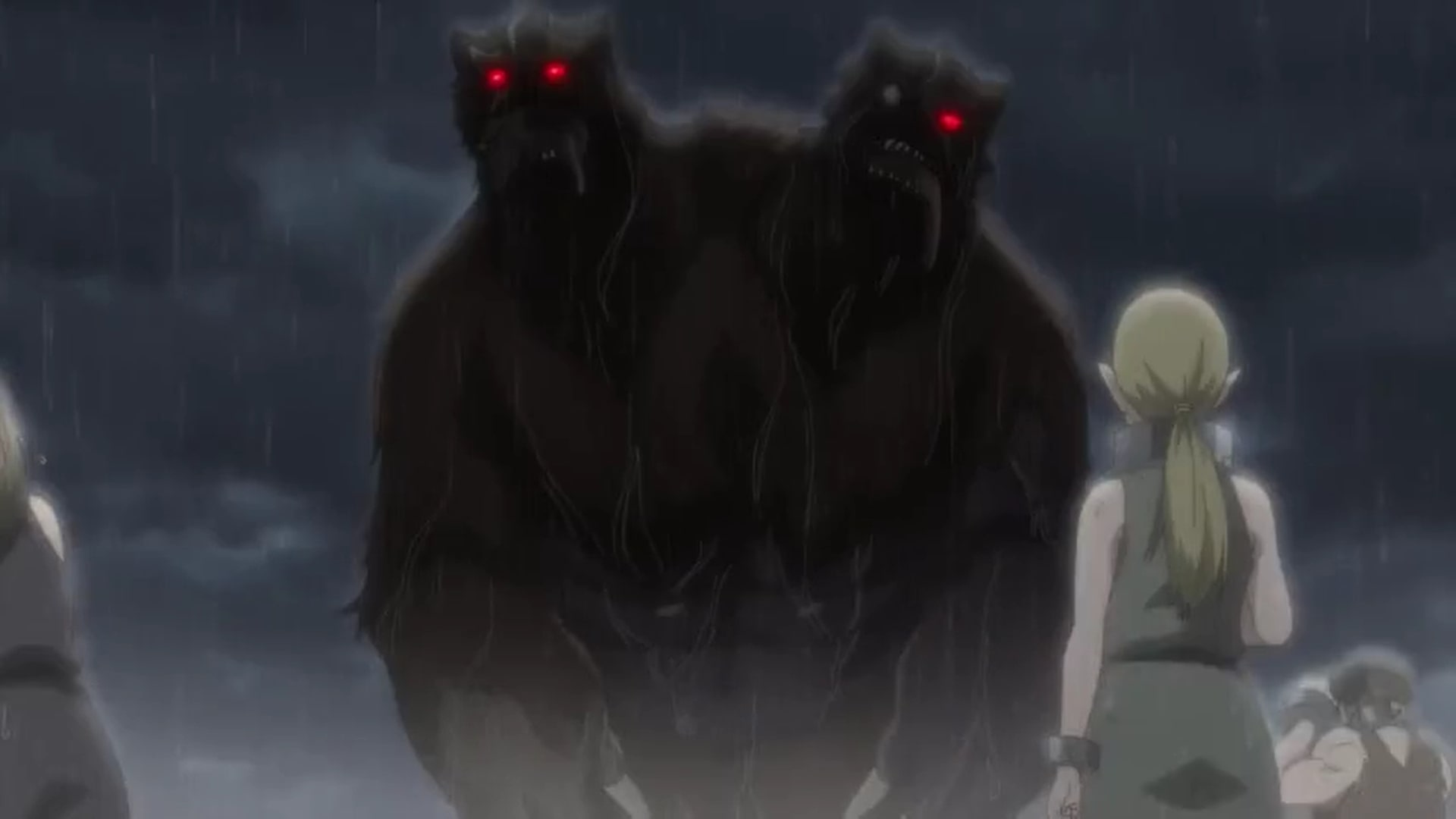 The humans who are in control of the slaves order them to stay in their place, so that they can themselves run away, while the beast is busy hunting others down. Since the neckband makes it impossible for the cat people to disobey their owners- they are stuck in their place. However, when the human who gave them their orders tries to flee, he is caught in the carnage started by the two-headed bear. As the body of one of the cat-people falls on him, he is unable to move on time and the beast just crushes him on the spot.

After his death, the order he gave to his slaves becomes meaningless and the cat-people are free to run for their lives. Unfortunately, it is too late for most of them as the two-headed bear is too close and easily begins to kill them one after another. Luckily, the brave cat-girl who had previously tried to take a stand for her people sees the magical sword stuck in the mud right in front of her.

She wastes no time getting a hold of him. That’s when she and the magical sword realize that they can communicate using telepathy as soon as they are in contact. The latter encourages the cat-girl to take him out of the mud and use him to fight back. Just when the two-headed beast almost gets to her, the magical sword uses telekinesis to take her a few feets away- well beyond the reach of the beast. 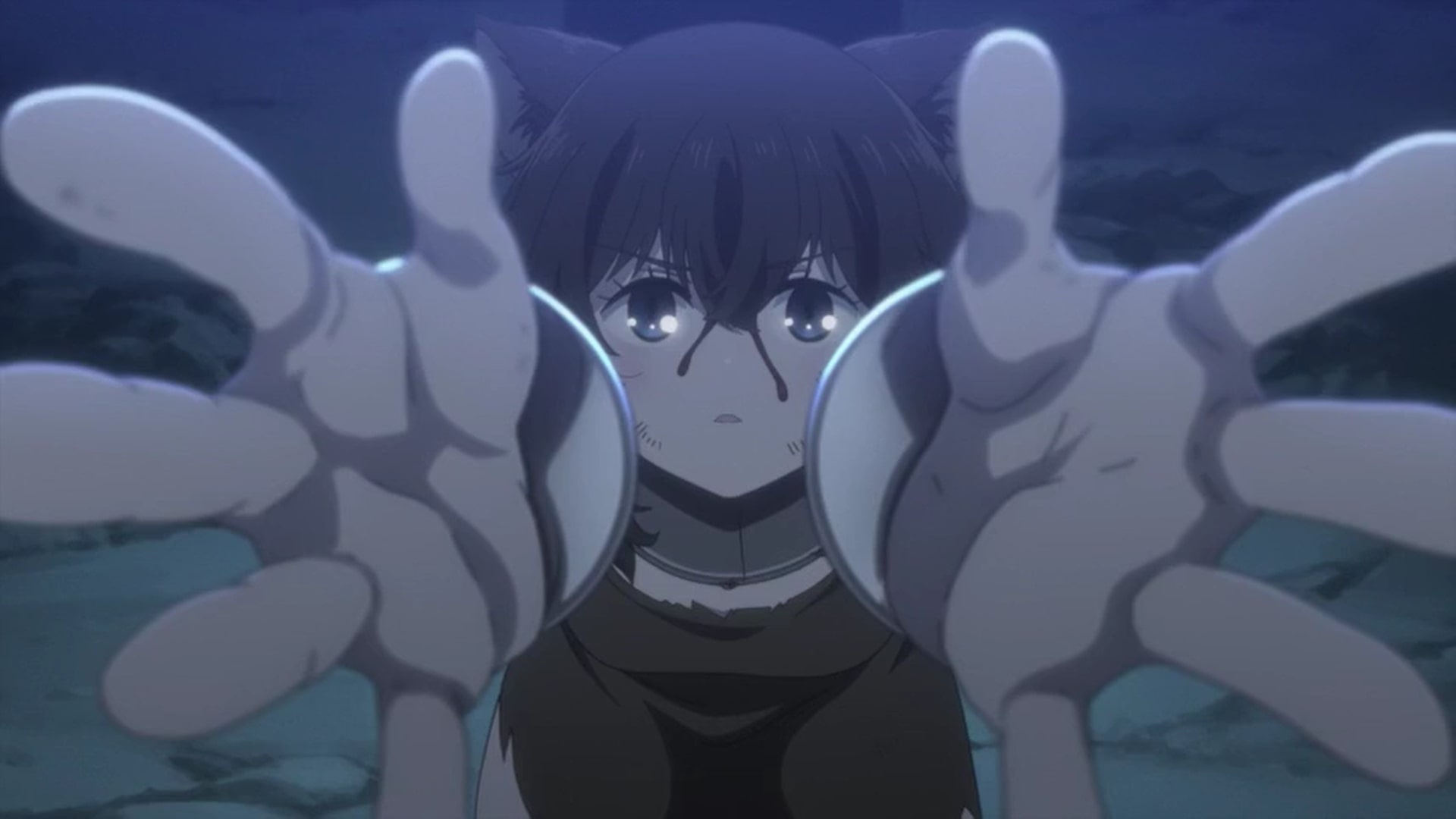 After acquiring abilities like Sword Magic, Sword Art, and Fire Power by skill sharing, the young cat girl fights against the two-headed bear with the magic sword in her hand. The battle is one-sided the duo easily manages to kill the beast in the end.

How Does the Magical Sword Free the Cat Girl? Does She Agree to Wield Him?

After killing the two-headed bear, the young cat-girl expresses her gratitude and is about to leave the magical sword where she found him. But the latter expresses his desire to go along with the girl. However, before she could make a decision, one of the humans that has survived the carnage by running away arrives there. When he sees the cat-girl with the sword, he asks her to hand him over. 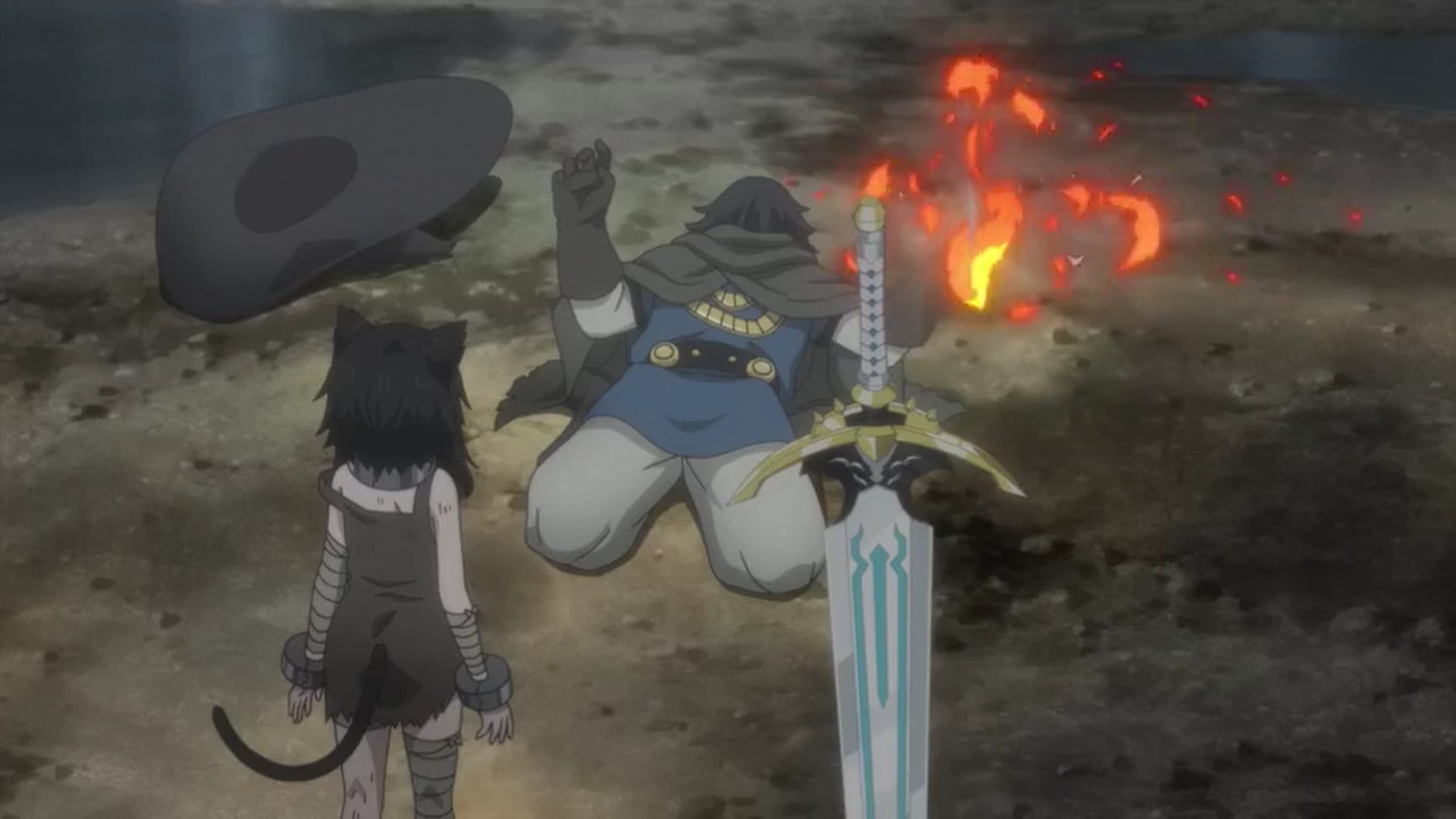 When she refuses, he gives her an order to show that she is in his control no matter what she wants. He goes on to brag about and show the slave contract to her, to remind her that she will always have to follow his orders. The magical sword that has been hearing their conversation so far, uses telekinesis and firepower to burn the contract itself, which frees the cat girl from her life of enslavement immediately. It turns out that the girl’s name is Fran and she starts calling the magic sword, Shishou, after learning that he doesn’t have a name. Furthermore, she also agrees with his request to become his true wielder from that day onwards.

Read More: Is Reincarnated as a Sword on Netflix, Hulu, Crunchyroll, or Funimation?