Review: ‘Goat’ Takes on Hazing Without Telling You How to Feel 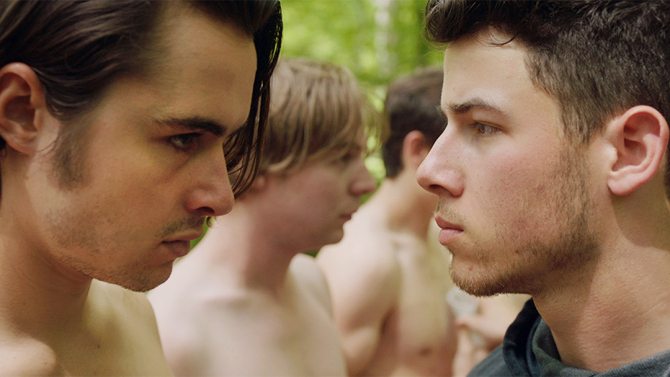 Andrew Neel’s Goat is a movie that depicts fraternity life in ways that we are not used to seeing on film. There are no wacky hijinks of movies like Animal House, Old School, or even more recently, the Neighbors films. Neel adapts the difficult truths of Brad Land’s memoir and delivers a dark and disturbing look at life inside a fraternity house.

Early on in the film, Brad (Ben Schnetzer) is brutally attacked by two strangers. He is left bruised and tormented by the assault just before going away to college. Once he gets to school, he pledges a fraternity, where his older brother Brett (Nick Jonas) is a member. Brad wants to feel like he is a part of something and the brotherhood of a fraternity is alluring.

The majority of the film takes place during Hell Week, where the pledges are forced to run a gamut of demeaning and abusive tasks, which prove their allegiance to the fraternity. What’s fascinating about Goat is watching Brad go through these twisted rituals, while still battling the trauma of his attack. If the film had dug deeper into the psychological element of the material, Goat could have been something truly great.

Even so, Goat does a lot of things right. It depicts a part of college life without taking a stance. At times the film is hard to watch because the pledges are forced to do so many disgusting things but Neel, along with writers David Gordon Green and Mike Roberts, don’t condone the fraternity antics. Almost as importantly, they don’t condemn it either. Working from Land’s memoir, they present his depiction of life in a fraternity and all the aspects that came with it.

Jonas is the most established name of the young cast and he is very good in the movie. He walks the line of being a bigwig in the fraternity and trying to be a protective older brother. He can’t show partiality to Brad and it’s interesting to watch Brett push his brother harder and harder through Hell Week. The real star turn here is Schnetzer, who has already appeared in two films this year (Warcraft and Snowden) but this is his first chance to really be noticed. Brad is a complex character to play and we believe every beat of Schnetzer’s performance.

There is plenty to recommend about Goat but I can’t help to think the film holds back in displaying the affects of certain chain of events. But Goat asks a lot of questions without giving any easy answers, which is always the sign of a good movie. See the film with a friend because there will be a lot of talk about after.