Review: I Know This Much Is True Episode 2 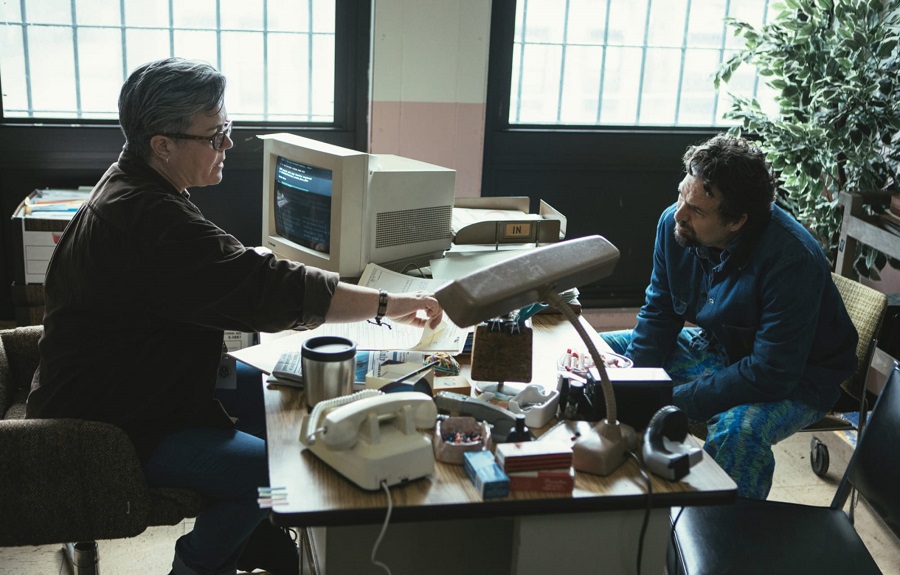 The first episode of ‘I Know This Much Is True’ showed us the inseverable rope that ties the lives of a pair of twins in a heart-aching story. In its second episode, it further focuses on Dominick’s entrapment with his brother. The weariness of keeping up with the troubles that Thomas’ illness gets him into and the constant effort of protecting him from the rest of the world shows on Dominick’s face. But while in the previous episode, they had been presented as an inseparable part of each other, this episode gives us a more individualistic idea of events for both of them.

I Know This Much Is True Episode 2 Recap

Dominick recalls the school trip to New York when they were kids. Thomas got stuck in the bathroom and almost ruined the tour for the entire class. When they reached the part where they had to see the Statue of Liberty, Thomas got too nervous about getting on the ferry, and Dominick was forced to stay behind with him while the rest of the class moved on. Years later, he still finds himself trapped with his brother.

He wakes up to an injury caused by the guards when they hit him. His girlfriend, Joy, tells him about the reporter who has been trying to get an interview with Thomas. She suggests they do it, but Dominick rebuffs her. He visits Thomas’s social worker and finds out that his brother has to remain in the hospital for a minimum of 15 days. And if things get worse, the time period might get extended to a year.

To further discuss Thomas’ mental state, Dominick meets with Dr. Patel. She plays him the tape of her conversation with Thomas after he caused a ruckus in the facility, which paints a different picture of his brother’s health than he had imagined.

I Know This Much Is True Episode 2 Review

Told from the perspective of Dominick (which makes us wonder what it would look like from the point of view of Thomas), the show opens up more wounds and frustrations that he has harbored over the years. Within the first few minutes, he grumbles about how Thomas ruins everything. He has to share the attention that his brother’s nervousness and paranoia bring with it, and all these years later, it looks like he never succeeded in growing out of that shadow.

We also find out about the tragedy that struck Dominick and then destroyed his marriage with Dessa. It is one of the scenes in the episode that makes you conscious of a lot of things about the story and the way it is being told. It shows that you don’t have to look directly at something to be aware of its presence or to understand its impact on a person’s life, which is something to think about, especially under current circumstances.

Director Derek Cianfrance uses the camera to keep a complete and undistracted focus on the characters. It usually stays on their face, or even just their eyes, to give us intimacy with them, as if trying to push us inside their heads. But for the scenes that depict the loss of Dominick and Dessa’s daughter, it lingers at a distance. It gives them space for their loss by increasing the proximity between the characters and the audience. We never get to see the baby, but the crib, the socks, and the coffin are enough to convey the emotions.

Similarly, the episode also keeps Thomas away from sight but always in focus. He is the first thing on Dominick’s mind when he wakes up in the morning, that is, if he sleeps at all. His whole day is consumed by the visits to the people concerned with his well-being. It affects his job and his personal relationships because he doesn’t have enough time for them. And when he hits the sack at the end of the day, he is still consumed by it. Even when his brother is nowhere close to him, he is trapped by him.

The episode also begins and ends, somewhat, with the focus on the twins’ childhood. The opening scene is used to give us an idea of the length of time for which Dominick has been held back by his brother. Stuck with Thomas, he has had to see the world from a distance, never being able to break away and inspect something closely for himself. As the ferry rides away and the Statue of Liberty appears at a distance, we get the entire essence of his life. This is what it has been like for him all this time.

In the scene with Dr. Patel, he acknowledges that he can never really be free of his brother; that he is his curse. He might look like the normal version of Thomas, but they are really the same. While his brother is confined at Hatch, Dominick is in a prison of his own.