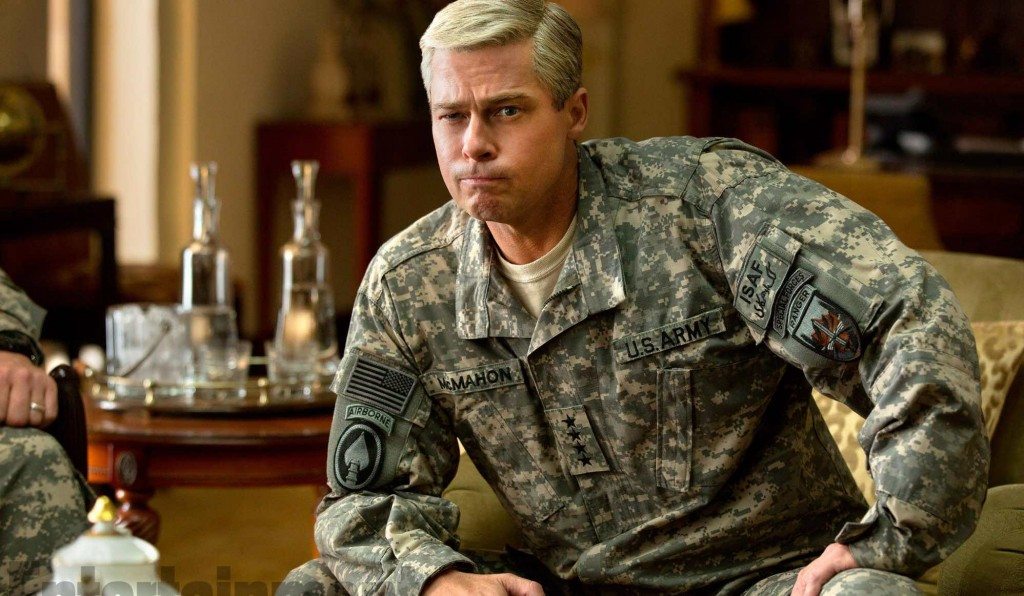 Brad Pitt joins the Netflix arena with War Machine, a would-be satire if it could ever focus itself long enough to make a point.

Director David Michôd – best known for the taut Australian thriller Animal Kingdom – gets his biggest directing role to date and visibly flounders to find a thesis or a focus in his adaptation of Michael Hastings book “The Operators.”

Pitt stars as Gen. Glen McMahon, who is sent on a military mission to Afghanistan as the war there is hoped to be coming to an end. Under the advisement of the newly inaugurated President Obama, McMahon is tasked with establishing peace with Afghani leaders, in an effort to bring the war to a close.

A lot happens within the movie’s running time but none of it ever molds together into any kind of cohesive story. We know why McMahon is sent to Afghanistan but his efforts are presented with a startling lack of urgency to the movie, which plods along as it goes. The movie vacillates between the silly and the serious throughout, never finding a sharpness to be effective as a satire or the edge to be effective as drama.

Pitt leads the cast in an extremely – sometimes distractingly so – mannered performance. Every move taken and every word spoken seems like they are being forced out of the actor’s mouth. He speaks with a gravely tone and there are moments in the movie where it seems like Pitt is exhausted trying to keep up with himself.

A cadre of familiar faces show up throughout the movie, without ever having a whole lot to do. Ben Kingsley, John Magaro, Topher Grace, Anthony Michael Hall, RJ Cyler, Will Poulter, Meg Tilly and Tilda Swinton all pop in here but most of the actors – the younger members of the cast, especially – seem excited to be a part of the Brad Pitt show and aren’t concerned with their lack of screen time.

Biting satire is a bold undertaking and craft of its own – kudos to those who can actually pull it off. It takes a strong writer and director to do so, and while Michôd has proven his skillful niche in mood pieces, he isn’t the right person for the helm here. While watching the movie, I often wondered what Oliver Stone could have done with this material.

War Machine is more disappointing and frustrating than overtly bad – there are several inspired moments sprinkled throughout. That’s the movie’s underlying problem – it should be made of more than just moments. The cast is there, ready to perform for a director who just needed to dig a little deeper into the story.