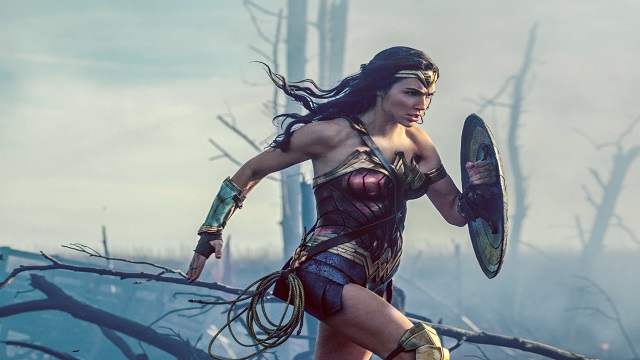 It has been 14 years since director Patty Jenkins helmed Monster, her first feature, which won Charlize Theron the Oscar for Best Actress. The small, gritty and devastatingly effective drama announced the arrival of a talented new filmmaker, who we all sat by eager to see what she did next.

Jenkins hasn’t made a film since then (she has directed many television episodes of some of your favorite series) but she is back in theaters in a big way with Wonder Woman, one of the smartest and most engaging summer blockbusters to come around in quite a few years.

Gal Gadot gets her star-making role as Diana, an Amazon princess on the island of Themyscira, who longs to be a great warrior, much to her mother, Queen Hippolyta’s (Connie Nielsen), dismay. Even so, she continues to train with General Antiope (Robin Wright).

The outside world is in the midst of World War I and an American pilot, Steve Trevor (Chris Pine), crashes near the island of Themyscira, bringing tales of warfare to Diana, who leaves the island and teams up with Steve. Together, they work to bring down German general Ludendorff (Danny Houston) and Dr. Maru (Elena Anaya), and their nefarious plans of chemical warfare.

Wonder Woman is certainly not groundbreaking material in its construct but what Jenkins and the cast and crew do with the material helps escalate the film to the upper echelon of recent superhero films. The movie is stunningly photographed by cinematographer Matthew Jensen, whose clear lens immerses us in the action scenes. Even when Jenkins opts for a few too many moments of slow motion action, the set pieces are never not thrilling.

A great deal of the film’s success lies within Gadot and Pine, who ooze charisma and have a playful chemistry with one another. Their arc as strangers, then cohorts and maybe more, is so clearly defined throughout the movie and portrayed by the two actors. Nielsen is strong in her supporting role, while others fade into the background, but this is mostly, and deservedly, Gadot’s show. She is strong but vulnerable, creating a dynamic character in a type of film that doesn’t often ask for such.

Even when some of the CG feels muddled and murky, the movie springs back to its clear and crisp visuals, never losing you as a viewer. Jenkins has such a steady hand at mapping out each scene – from the large set pieces to the quiet moments between the characters – it makes the 140-minute picture fly by with ease.

Wonder Woman is an origin story and it stands head and shoulders above similar films of its kind because it doesn’t weigh itself down in expository mumbo jumbo, which often suffocate these kind of movies. Jenkins keeps things moving with such assurance, it feels like she has been making tentpole films for years. Hopefully, we don’t have to wait another 14 years to see her at work again.