In recent times, we have seen a surge in the reinvention of stories of famous literary detectives. BBC’s highly successful experiment with bringing AC Doyle’s Sherlock Holmes into the present world is perhaps the best example, but when it comes to the recent resurrection of popular crime-solving heroes, HBO’s ‘Perry Mason’ comes to mind first. The character received a fresh spin with the show providing an origin story to him, which is something that Netflix’s ‘Young Wallander’ tries to do too. However, unlike the HBO series, this crime drama lacks the atmosphere, the thrill, and even the hints of humor that had made Matthew Rhys’ show a great hit. The Netflix series tries to attempt something inventive but doesn’t quite hit the mark.

Kurt Wallander is still a rookie cop when we meet him. His only job is to patrol around town and respond to late-night noise complaints. He lives in a neighborhood where the residents are not trusting of cops, which is why he hasn’t told anyone what he does. This changes when a teenager is strapped to a fence and is blown up with a grenade in his mouth. Wallander’s interest and involvement in the case lead him to quickly rise up the ladder and become a detective. In between this, he also meets Mona, who works at a shelter for helping immigrants, and after a few meetings, they fall in love. The involvement of Sweden’s richest family makes things complicated and there is a lot of bureaucracy and red tapes and the inability to deliver justice that Wallander has to put up with. As the case turns into a wildfire, his quest to solve the first case of his career becomes all the more challenging. 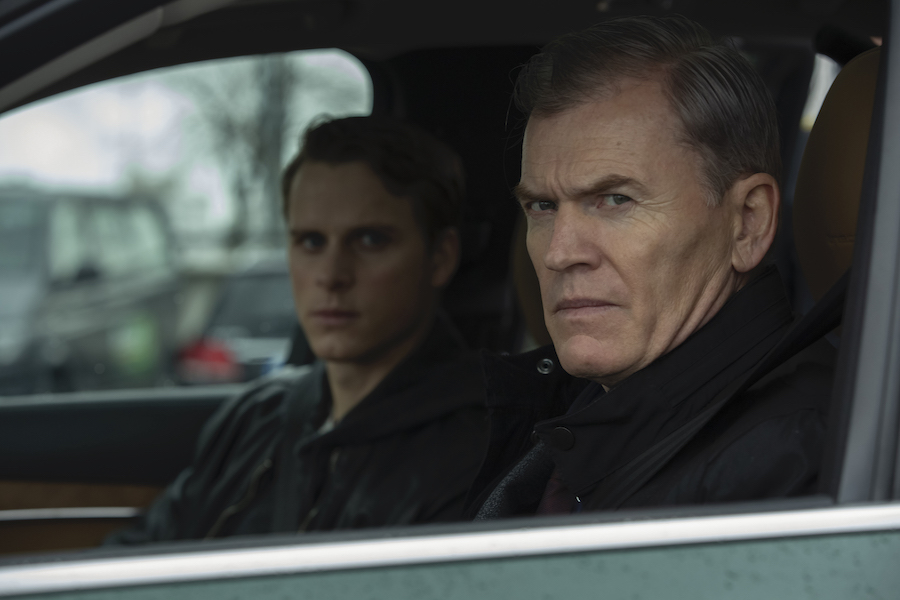 The first thing that strikes you about ‘Young Wallander’, a story set in Sweden and based on a series of Swedish novels, is that the language of the show is English. It certainly wasn’t a surprising factor when Kenneth Branagh’s ‘Wallander’ started airing on BBC. But with Netflix, which has displayed a commendable interest in bringing Scandi-crime dramas to the international audience, it feels like an anomaly. After having seen considerable Swedish shows on Netflix, this factor keeps nagging at you. The characters speaking in British accents in the middle of Sweden does not work in the show’s favor.

This, however, doesn’t mean that the actors are bad in their parts. They try their best to fit into the casts made for them, but there is only so far they can go with the writing that goes slack a lot of time. Adam Palsson (who had appeared in HBO’s ‘Avenue 5’ as Mads, a model who takes over the role of a Bridge Crew member) looks the part of young Wallander and would have probably been even better had he got to play it in Swedish, but there are too many restraints and cliches for his character to break out of. And yet, there are times when you catch him as the anxious, nervous, tormented young police officer who is seeing too much at a young age and nothing will be the same for him again.

What doesn’t quite captivate us about ‘Young Wallander’ is its plot. For a character that has such a well-established reputation, the show doesn’t quite deliver a worthy origin story. The beginning of the case does make it look promising, as it starts out with a gruesome crime, but as the episodes unfold, things soon fall apart and, by the end, we are left with a mixed sense of disappointment for it. What, perhaps, disbalanced the show here was its enthusiasm for social commentary. The story begins with a hate crime and then expands into the territory of racism and terrorism, mixed with the anti-immigration propaganda. It also mixes in the discussion about the class divide and how capitalists never shy away from taking advantage of the under-privileged to serve their fragile egos and fill their bottomless pockets.

While the intention is appreciated, the execution lacks tautness. Focusing the story from the perspective of a white character gives it an unwanted image of a white savior trope kind of thing. Also, the show never really goes anywhere with all these things happening in the background. It never packs a punch when it comes to the issues that keep circulating in an orbit around it and never hit the center. In the end, they just become plot points that are there only to serve the purpose of the story and are discarded when it is time for the case to move on.

The case itself wavers considerably. It never lures us into its web, asking us to decipher the puzzle with it. It remains so detached from the audience that even before Wallander’s superiors tell him that his speculations won’t hold in front of a prosecutor, we have already made peace with it. With the way things go around, the case doesn’t even properly hold for the audience. Despite all these flaws in ‘Young Wallander’, it isn’t quite the worst. At times, it is enjoyable, and with just six episodes, it doesn’t feel like a lot of commitment. The fact that Adam Palsson is easier on the eyes and sometimes reminds of Mindhunter’s Jonathan Groff (or is it just me?), does make the pill easier to swallow. It won’t blow you away, but it just might be enough to keep you around for the entirety of its season.