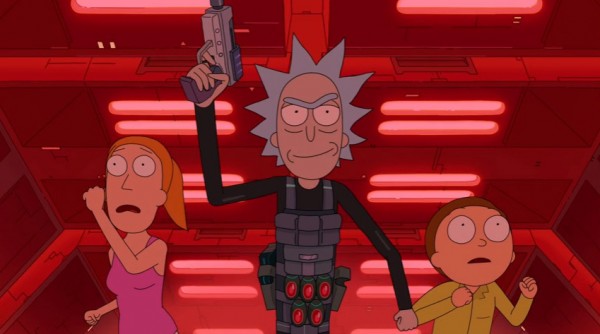 Let’s start this with an overview of season 3, which, right at the outset I will term as the most turbulent season of the three. While season one and season two were consistently great and had episodes ranging from above average to good to excellent, the latter being what I consider the standard for ‘Rick and Morty’ to be by now, season 3 had episodes that range from strictly average, even skippable stuff, to truly, outrageously good television, not just the best of the series, but being among the best sitcom episodes ever, in my opinion.

Not too long ago did I authored an article listing the very best ‘Rick and Morty’ episodes across the three seasons, that you can read here. Interestingly enough while scrolling down the list, one finds a rather even distribution of episodes from the first two seasons, but the top three entries are all episodes from season 3. Conversely, while I am not sure that terminology would exist, if I was to list out the worst episodes of the series, it would also be from this season. Fortunately for us, when we consider ‘The Rickshank Rickdemption’, the first episode of the season, we have ourselves a season opener as good as any, easily among the best of the series. What a truly ingenious episode! 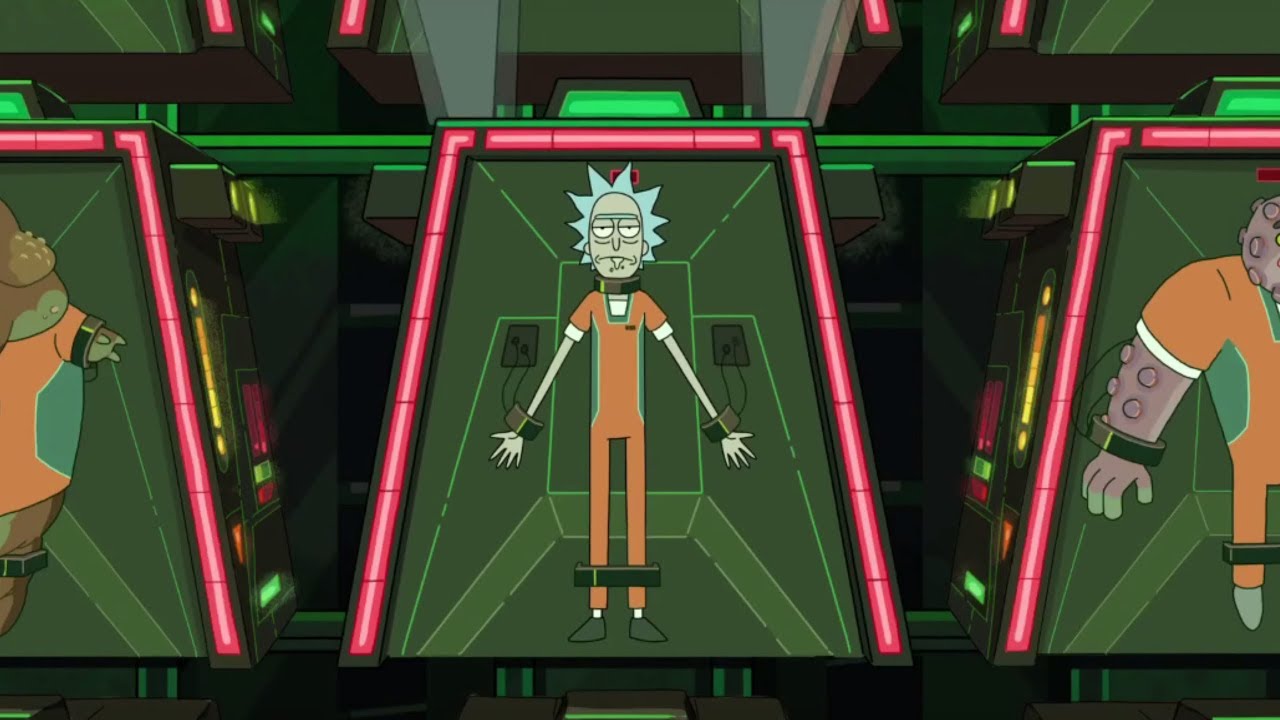 Picking up somewhere after the last episode ‘The Wedding Squanchers’, the Rick and Morty kind of red wedding that ended with Tammy revealing herself to be a galactic agent and slaying Birdperson while the Smith family is forced to seek refuge on Tiny Planet, Rick seemingly heroically turns himself in to the galactic federation to the sound of ‘Hurt’ by Nine Inch Nails, to save his family from being on the run. The Smiths are returned to Earth that is now part of the Galactic Federation: resulting in the planet being overrun by aliens and the skies covered with alien ships, each of the homes having a hostile overseeing robot, people being paid in pills and a new calendar that renders Morty 35 years old. All in all, it’s all blown to hell, and Rick is indefinitely incarcerated at the Federal Prison. 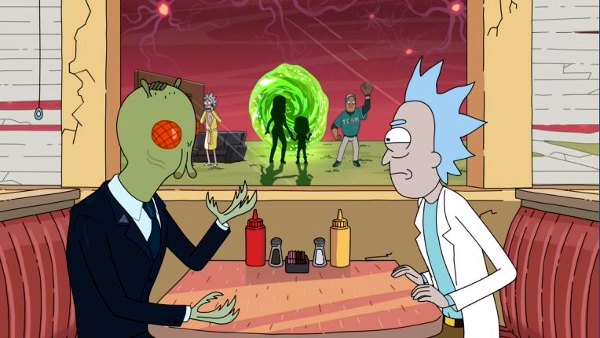 The episode begins with Rick and the Smith family having breakfast at Shoney’s where he narrates the last leg of how he escaped from prison in what is quickly revealed to be a simulation inside Rick’s mind by the aliens holding him at the prison, in an attempt to access the memory of the day on which he successfully invented the portal gun. Cornvelius Michael, the alien, and Rick travel to the memory of that day, while Rick lamentably reveals he lost his wife on that day and transformed into what he was today. The day that changed everything. Meanwhile, Earth is shown to have been colonised by Galactic Federation, and the family is coming to terms with Rick’s absence, particularly Summer. 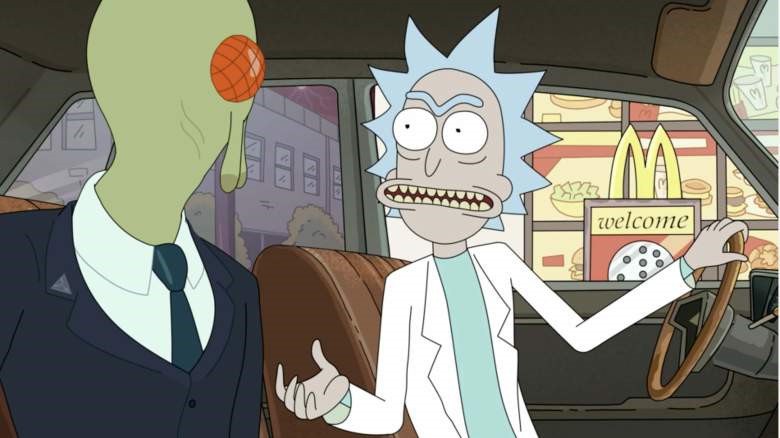 As Summer revolts, Morty helps her dig up the remains of himself and Rick from the current dimension for her to uncover his portal gun, and takes her to the Cronenberg Dimension, one of the sites of Rick’s misadventures. The Smith family there breaks their portal gun allowing the SEALs from the Citadel of Ricks to capture them, and later move to the Federation’s prison to capture and kill Rick C-137. 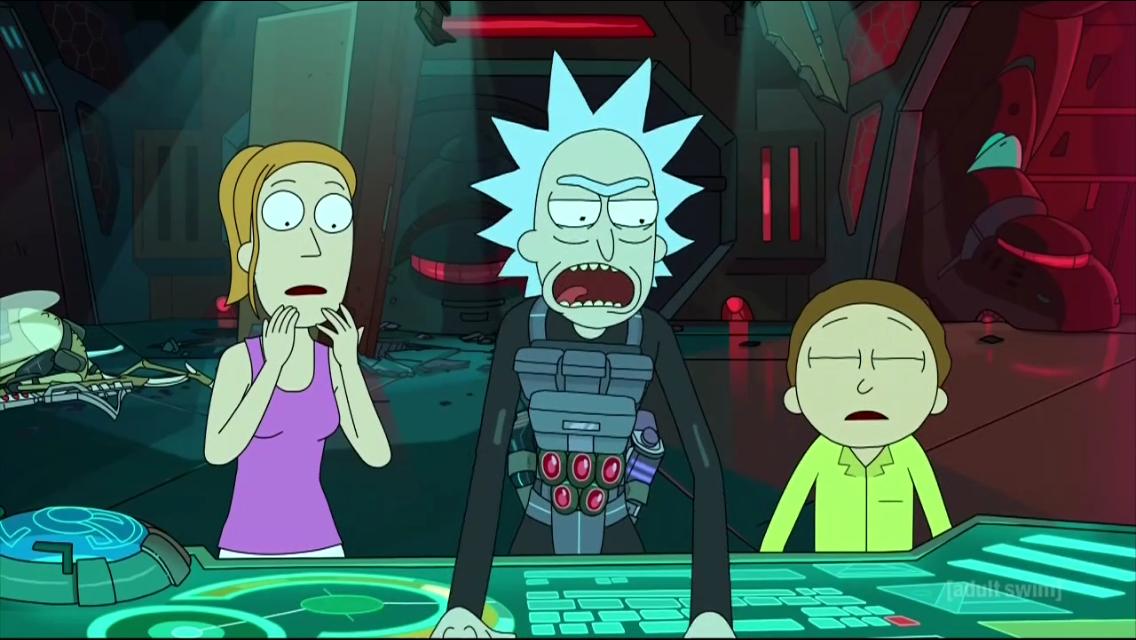 As ‘Rick and Morty’ episodes go, it is only a matter of time before Rick outsmarts Cornvelius, revealing the entire setup to be false, and has him upload the code for a virus rather than the details of his portal gun, allowing him to transfer his consciousness to Cornvelius’ body through the Brainalyser, and moves to extract sensitive data about the Federation with his level 9 access, before being ambushed by the SEALs. He overpowers all of them and travels to the Citadel of Ricks by alternately transferring his consciousness to another Rick.

When in the Citadel after transferring his consciousness to the Captain and surviving a standoff, he moves to teleport the entire Citadel into the Federal Prison, and destabilises the Federation simply by changing the value of a Blemflarck (the federal currency) from being one of itself to zero of itself. The federation and the Citadel face collapse, as Rick returns home with Summer and Morty. Jerry is seemingly upended by all of this, and asks Beth to choose between himself and Rick, only to be confronted with a very unpleasant outcome. The two divorce, which is where most of the arc of this season heads to. The stuff until here is simply great for the lack of a better word, but nothing beats Rick revealing to a terrified Morty how he had himself captured to take revenge upon the Galactic Federation and Jerry for crossing him and being the only patriarch in the family now. The best is yet to come though, as he also reveals he has been doing all this for McDonald’s Szechuan Chicken McNugget Sauce that was discontinued by McDonald’s years ago. Take that, sinister character motive! 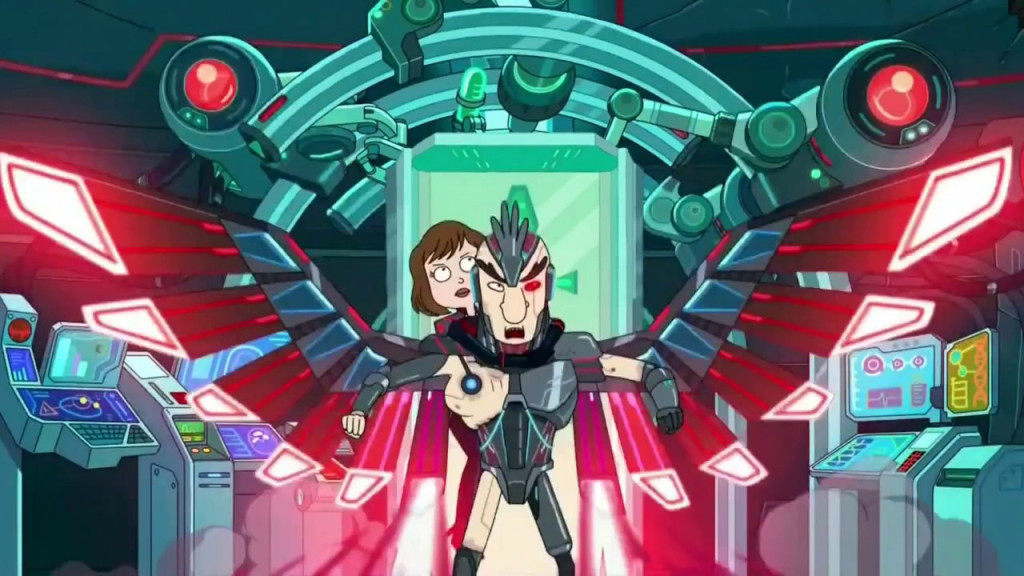 In a completely unexpected post credits scene that happens almost out of nowhere, we see Tammy and a few federation aliens reanimating Birdperson with cybernetic parts, who then reawakens as Phoenixperson (or Cyberbird), as Tammy mounts him and flies away. You know what would be great after this? The federation fighting Rick back through Phoenixperson in the next season. I am counting on that. 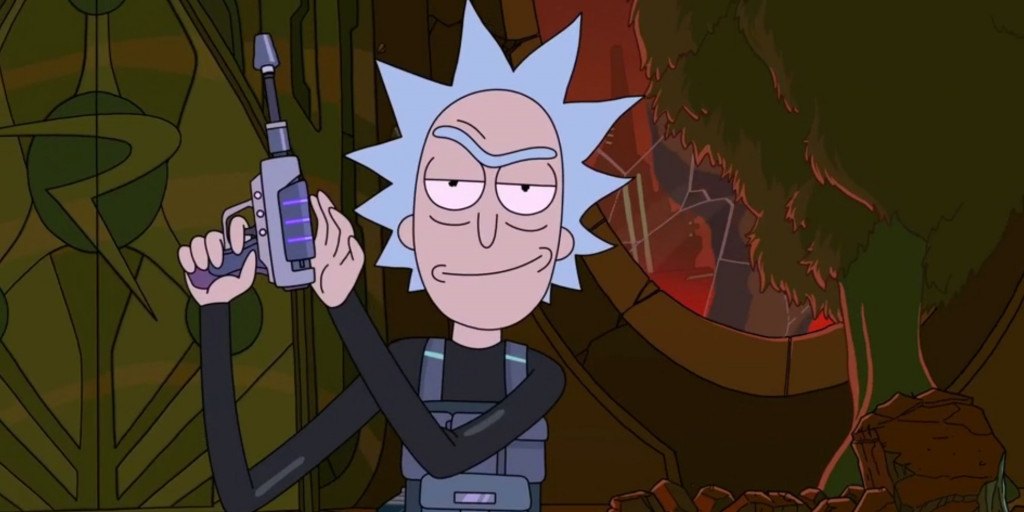 This episode left me with a feeling of awe in how a seemingly complicated story involving humour, action, family drama and science fiction was overpowered by a mundane desire for the Szechuan sauce, and an unsatiated desire to taste it myself, in vain. Intelligent writing, great but subtle (and a couple of fart jokes here and there) humour, the quintessential Rick, and an ending that was unexpected to say the least. Among the very best of Rick and Morty as I have already stated. I say, mighty fine sir.