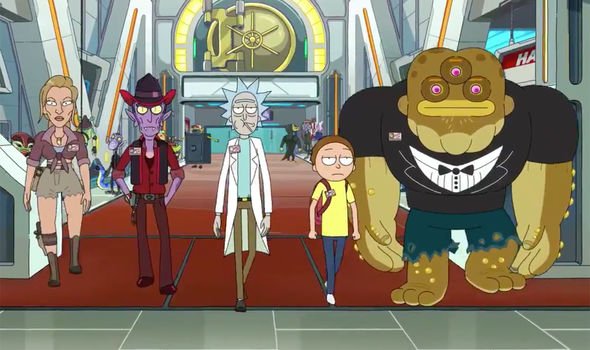 The fourth episode of Adult Swim’s ‘Rick and Morty’ presents a delightful episode that is simple and fun while being a hilarious exploration of society like the show is known for. This is probably the template that the sci-fi show’s makers would have wanted to excel in, for the season’s second episode which had not been its best.

Not resting on the back of socks, turns and meta-real twists, ‘Rick and Morty’ often comes up with stories that are simpler and structurally more linear or streamlined. It has almost become a format for the show wherein the episodes are alternatingly simple and complex. With the fourth season’s fourth outing, the series has provided us with its best, uncomplicated tale. There are no revelations or a Shayamalan/Nolan-like plot. Instead, the episode presents a linear tale that is equally funny and entertaining.

The fourth episode begins with Morty escaping extra-terrestrial monsters along with an anthropomorphic cat and running towards Rick’s spaceship. However, the anthropomorphic cat gets shot before it can sit in Rick’s space shuttle. It is revealed that Morty entered prison to steal an object that Rick wanted as the latter promised had promised him a dragon if he does so.

However, Rick denies buying Morty a dragon, telling him that “the only people interested in dragons are nerds who refuse to admit they are Christian.” Then, Rick tries to make Morty unconscious with a gas, but ends up falling unconscious himself too. At the hospital, Beth convinces Rick to say true to his promise.

As a result, Rick orders a dragon which gets delivered to the Smiths’ house by a wizard from an alternate world. The wizard makes Morty sign a blood contract, hands him a book of spells and explains the basic regulations about controlling a dragon to him.

Meanwhile, Jerry complains to Rick about a talking cat in his room. However, Rick ignores that and the cat convinces Jerry to book two tickets to Florida for the two of them.

However, the dragon accidentally burns a hole in the living room while it is sleeping. Rick is watching TV with Summer when this happens and gets irritated. So, he goes to confront the dragon. Having protected himself beforehand from fire, he wins a tiny fight with the dragon by having a robotic version of himself be eaten by the dragon. This way, he starts to control the dragon using the robot in the dragon’s belly. Rick wants the dragon the leave but the creature has been hoarding memorabilia which makes him interested and distracted.

On the other hand, Jerry and the talking cat start to have a lot of fun on the beach. However, when someone steps on the cat’s poop, the cat blames Jerry from having defecated. Jerry is chased by the people at the beach while the cat goes to party with them on a boat. But, due to the cat’s sassy remarks, it is thrown out of the boat and forced to return to Jerry.

Meanwhile, Rick and the dragon go out. They get drunk together and fly around the city. After bonding, the two share a moment and start to “soulbond:” their souls get connected by a holographic projection and the two are raised in the air by it. Morty and Summer see them soulbond and get disgusted as it is portrayed to look like sex: Rick and the dragon moan and express their pleasure after it is over.

Feeling betrayed, Morty tears the dragon’s contract summoning the wizard. Upon hearing that the dragon soulbonded with Rick, the wizard starts to beat the dragon with a lasso, calling it “slut.”

After that, they return home and Morty tells the dragon that he is disgusted by the soulbonding’s sexual nature and wants it to leave. Meanwhile, Rick asks Jerry where the cat came from. Rick tries to read the cat’s mind but gets extremely disturbed by what he sees. Jerry reads the cat’s mind too and gets disturbed. Both of them erase their memories.

As stated earlier, the fourth episode of the latest season of ‘Rick and Morty’ depicted a generally simple tale with a relatively straightforward plot. It started off in a quick fashion with gags appearing at the rate of bullets. Then, the episode’s story began heading in a direction that was not predictable for some time but was very action-filled. One thing led to another and the episode never felt boring.