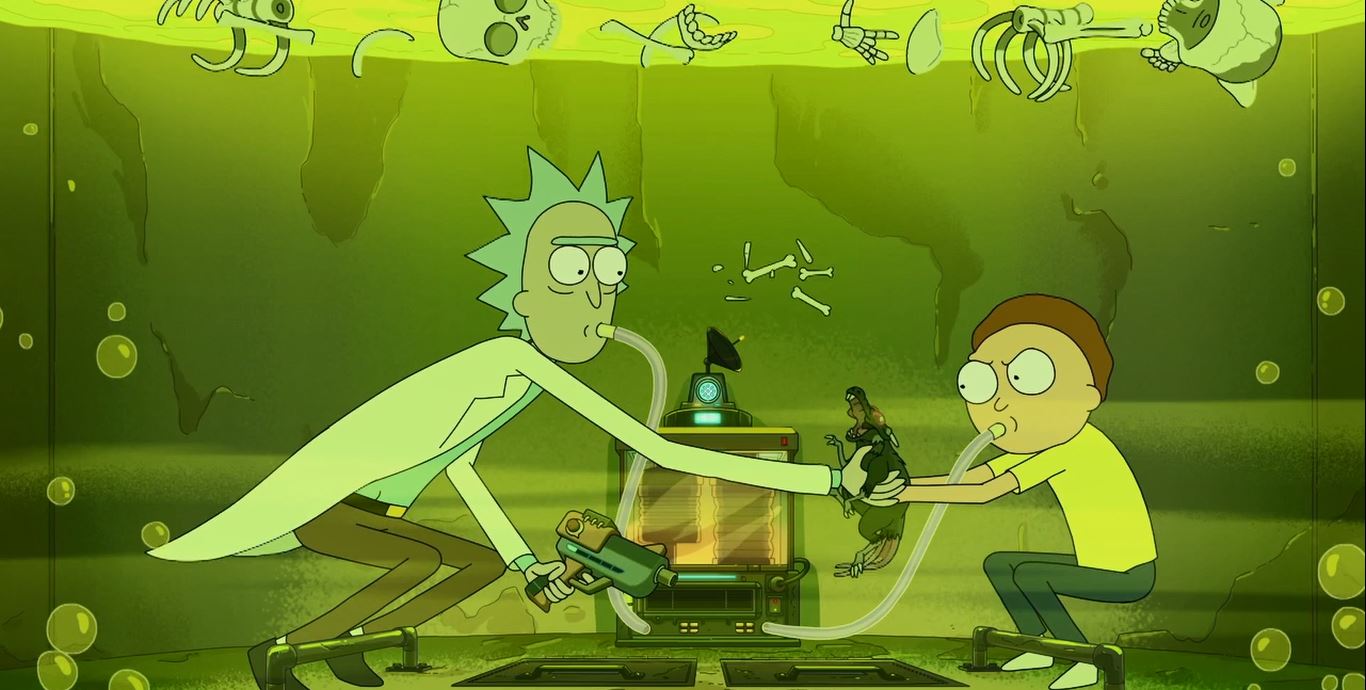 ‘Rick and Morty’ season 4 marks the adult animated science fiction series’ return from a rather long break. The installment has presented unforgettable episodes, which could be considered to be some of the best of the Adult Swim show while there have also been subpar ones. However, as most ‘Rick and Morty’ episodes go, the ones in the fourth season have been filled with maturely realized themes like that of progress versus biology in the previous one, ‘Promortyus.’ The eighth episode is titled ‘The Vat of Acid Episode.’

The eighth episode begins with Rick and Morty going to a risky, crystal exchange with a few alien goons. Rick tells Morty to jump in a fake acid vat that he has kept, in case things go south. Things do go south: the alien goons give Rick and Morty fake crystals and threaten them. Rick and Morty jump inside the fake acid vat. There is a compartment with bones in the vat which the two release to make the goons believe that the acid was real and that it killed the two. However, just to be sure, the aliens drop a ladle inside which Rick shoots with a ray gun. When they drop a rat for further inspection, Morty gets irritated and starts to shoot the goons.

Upon returning home, Rick and Morty argue, and the latter tells his grandfather that he (Rick) doesn’t respect any of his (Morty’s) ideas. Morty suggests a device that would make the world similar to video games with endless respawns. Rick says that it is a terrible idea. Morty tells him that he is saying that because he cannot build it. Rick gets offended and builds such a device. He gives it to Morty.

Morty starts having tons of fun with the video game device, which allows him to set a particular point in time (say, “point A”) and then do whatever he wants. He can use the remote to “respawn” back to “point A.” He uses this ability for various things…getting shot by cops on purpose, falling in a manhole, pulling down his teacher’s pants in front of his class, acting more confident in front of Jessica, getting a girlfriend (not Jessica). Despite going through harsh circumstances like surviving a plane crash, Morty does not want to use the respawn button since he has found love. However, Jerry presses it accidentally, making Morty respawn to the time just before he asked his would-be girlfriend out.

Morty goes to Rick to tell him that he is done using the device and that he realizes how Rick wanted to teach him a lesson: that we are who we are because of the consequences of our actions. Rick tells Morty that there were consequences and that the respawn device did not function like a time travel tool, which made Morty simply go back in time. Instead, every time Morty would set a point in time, he would be creating a copy of that exact moment in a parallel reality and then return to other reality after “respawning.” Hence, Morty’s actions did have consequences…he killed several Mortys in parallel realities since every time he would respawn, the Morty in “point A” would die.

Rick tells Morty that he can merge the probable realities to save the Mortys and get him back to his dimension (this is not Morty’s original dimension, the Rick is not his original Rick). However, a crowd, including SWAT officers, come to arrest Morty. Rick has designed a fake acid vat that Morty can jump into to save himself from the situation which he does. An officer inserts a ladle inside the vat to inspect. Morty tries to shoot the ladle but ends up killing the officer instead. Rick and Morty go back to their original dimension.

Post-credits scene: On a talk show, a man who is “impervious to acid” is called to showcase his talent and dropped into a vat. However, he seems to be screaming in pain for real.

Several episodes in the fourth season of ‘Rick and Morty’ have been criticized for being unnecessarily complex and loopy. Perhaps, that is why the Adult Swim show chose to switch to a lighter, less heady tone in characteristic ‘Rick and Morty’ fashion: by stating their intentions to do so in a previous episode, in a self-aware manner.

The adult animated series does seem to have nailed that tone right, ditching what seemed like an alternate format of a complex episode followed by a simpler one this season. The eighth and the seventh episode certainly prove to be more fun and humorous than some of their counterparts. ‘The Vat of Acid Episode’ is definitely one which requires less thinking and provides more entertainment. However, it seems to be lacking something.

That something would certainly have to do with the fact that the episode does not really present a deep theme. It is unfair, on the fans’ part, to ask for simple yet deep stories. The eighth episode does provide some room for introspection, if not enough. It explores the idea of living without consequences. Moreover, it presents the many-worlds interpretation theory, something which is becoming more prominent in sci-fi (it was seen in Alex Garland’s ‘Devs’): a theory that every possible action actually happens in multiple realities, thereby allowing for both, free will and fate. This could be one of the many references to other works, something which ‘Rick and Morty’ has been doing in a glorious fashion.

However, the eighth episode seems to be more about character. The whole respawn invention is shown to be Rick’s way of teaching Morty a lesson. Not an altruistic, parental lesson. Rather, Rick wants to teach Morty never to question his (Rick’s) abilities or intentions. Either way, point proven. In a nutshell, the eighth episode, like all ‘Rick and Morty’ episodes, is pretty entertaining, just not its best.