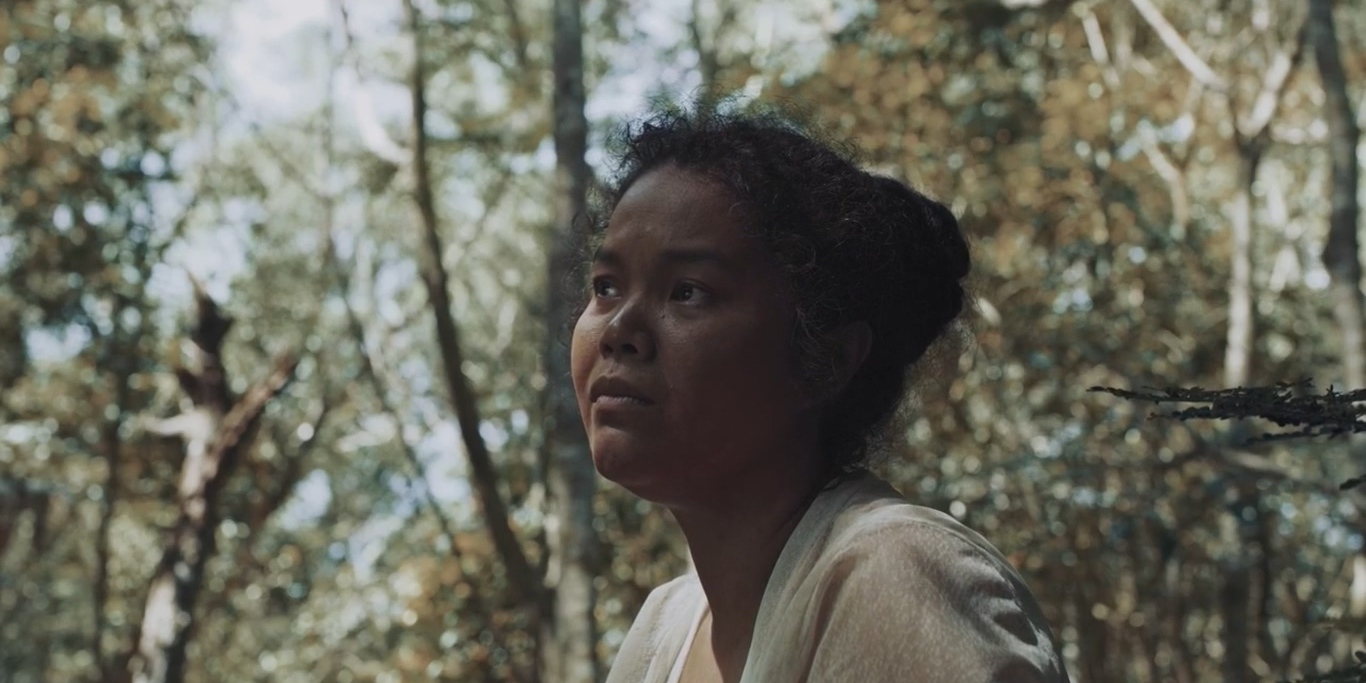 The jungle is a place of the past shrouded by myths and mysteries, where the lights of western modernity have not entered yet. In the darkness of the jungle, things often do not seem as they are, and ghastly creatures run amok. Crafted with meditative poise and fraught with sinister intrigue, ‘Roh’ (alternative title: ‘Soul’) is a slow-burning horror film that will stay in your heart long after the credits have rolled out. Director Emir Ezwan borrows heavily from traditional Malay folklore to craft an ambient tale of frightening impact. Light often gives way to darkness, and the tense score adds to an environment of unfolding tension.

A family lives in the middle of a jungle, cut off from civilization. If that is not a premise that evokes a feeling of dread, I don’t know what will. In the end, evil shows its true face, and the undead souls are driven to commit damning acts. Staying true to the mythological aura of the tale, the ending is kept cryptic, and if you cannot comprehend the ending, let us get to the bottom of this. SPOILERS AHEAD.

In the opening scene, a girl stabs a buried body near a burning tree. We meet a family that lives in the middle of the jungle – Mak and her two children, Along, the elder girl, and Angah, the younger boy. Along and Angah venture out into the jungle to find a dead deer hanging from the tree. A wandering soul appears at their door, drenched in mud. Mak gives her food, water, and shelter. They call her Adik, meaning “little sister.” 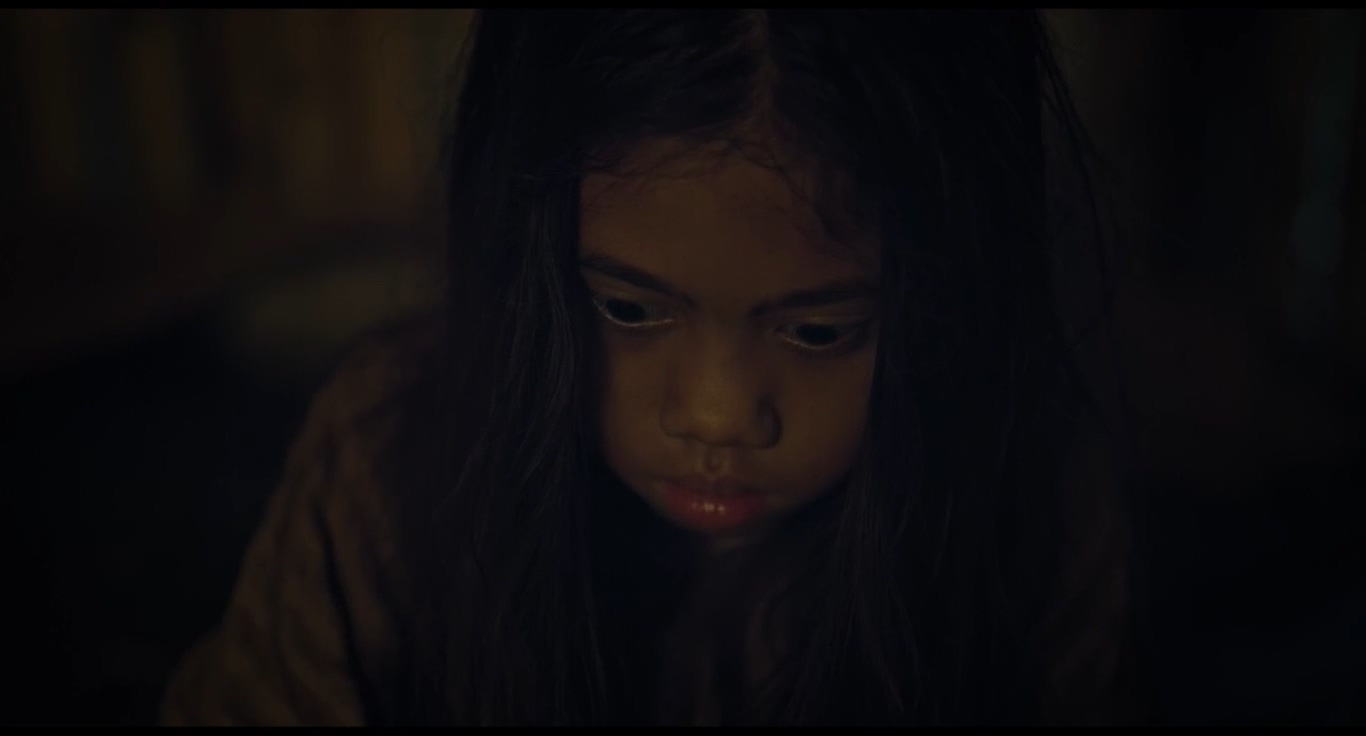 We see a dagger lurking in the mysterious girl’s hands. At night, in their dimly-lit cottage, Mak tells the children the story of the ghost hunter, who roams the jungle with his ghastly dogs. As the saying goes, animals fall ill or die at the sight of it, especially deer and little children. When dogs bark and the nightjars call from the jungle, the specter is thought to be nearby. Mak teaches them a little chant to ward off the spirit: “Grandpa, bring us their hearts.” The following morning, to their dread, Mak and her children wake up to see the girl feasting on the raw meat of a dead bird.

The girl prophesizes that the family will die by the full moon before slitting her own throat with her knife. The ritualistic suicide of the girl puts a shadow of evil on the family. They take the girl’s body to a dead tree in the jungle and keep her there. The family is visited by strangers from outside, including a shamanic woman named Tok (from the hills) and a one-eyed hunter from the village on the other side of the river. Mak hides the incident of the girl’s death from both of them, but the ways of evil are beyond the comprehension of ordinary mortals, and Mak’s destiny is written by the error in her judgment.

Roh Ending: Why Does Along Set the House on Fire?

After the death of Adik, sinister and potentially incomprehensible events disrupt the idyllic peace of the family. At night, Along crawls under the chalet to meet the girl’s ghost, falling mysteriously ill the following morning. Mak puts her trust in the shamanic woman, who performs a ritual to ward off the evil spirits that have infested the place. Malay ethnic culture is an animistic one, meaning they believe that animals, trees, and even places possess distinct spiritual energy. 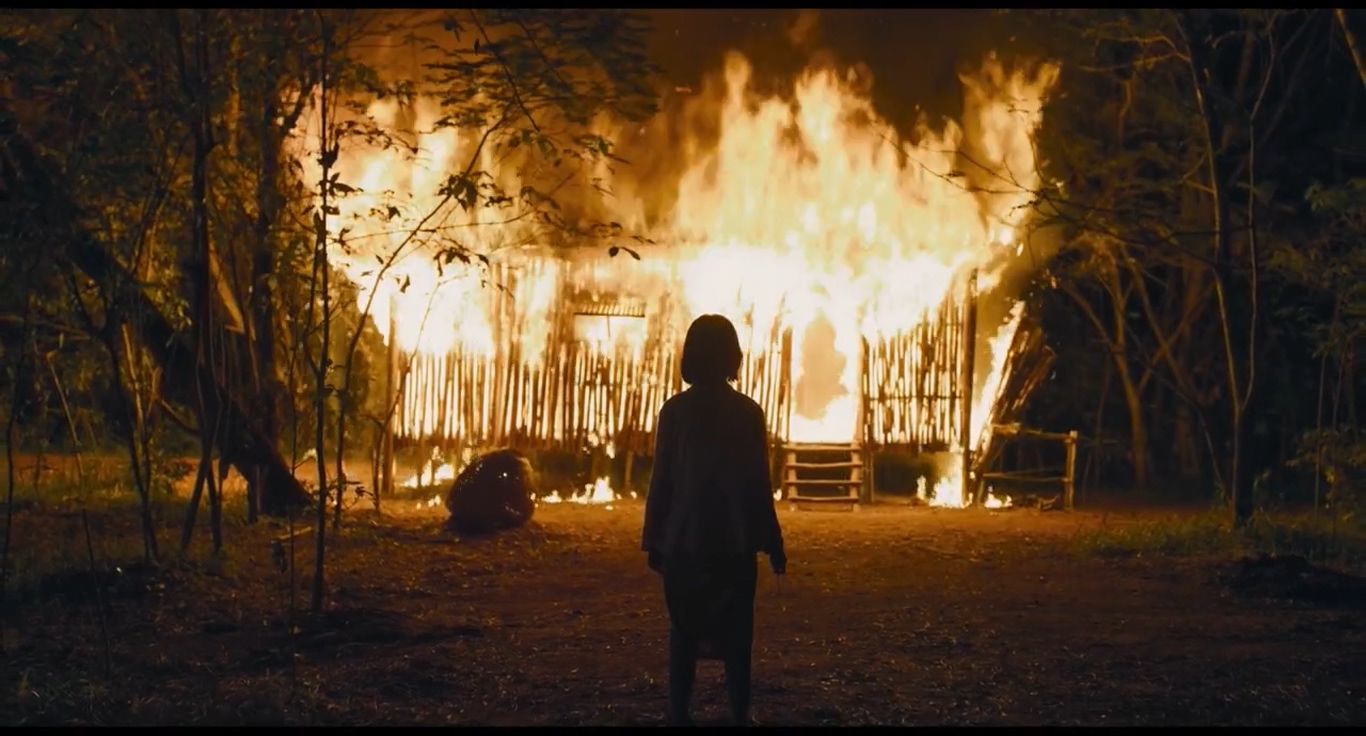 Tok senses the energy when she offers the chicken to the spirit. She orders Angah to throw the chicken’s blood in the water to please the demonic spirit. She also tells him to sacrifice the pigeons, but while Angah cuts one of them, he lets the other one fly away. The curse is not healed, and Adik’s spirit lingers in the place. As the full moon comes nearer, Along sees the spirit of the girl at the door and follows her as if in a trance. Along breaks from the trance only when she reaches the dead tree where the body of the girl is kept. She finds the lantern near the girl and slowly retrieves it.

In his dream, Angah hears his sister screaming his name while running from the girl’s ghost. He also sees his sister burning alive in the middle of the jungle, with flames still rising from her scorched body. In the morning, Mak and Angah wake up to find Along missing from her bed. She is found in the middle of the jungle, traumatized and drenched in blood and mud. The hunter finds her and takes her back to her family.

Along urges Mak to leave the place and go elsewhere, whereas Mak says that they have nowhere to go. An argument erupts, and Along curses at her mother, which is very unlike her. It seems that she is still possessed. The suspicion is set in stone when Along smashes her head on a nail protruding from the wooden floor and kills herself. In the end, then it is not Along but her ghost who sets the house on fire, resembling the incident that took place in the village on the other side of the river. Tok does a ritual before the buried body of Adik, and she cryptically says that the body is for the next child, and Adik has done her part. Therefore, it seems that Along is guided by Tok to commit the arson.

Is Tok Evil? Why Does She Possess Children?

The final twist reveals that Mak put her faith in the wrong place. As Tok divulges at the end of the film, she is not human. We get the impression that neither is she a benevolent spirit. Tok refers to herself in the plural “we” while hinting at her, or their, ephemerality. The film begins with a quote of Iblis from the Quran, which reads, “I am better than him. You created him from clay, and you created me from fire… Reprieve me until the day they are resurrected.” It seems that Tok is an incarnation of Iblis. 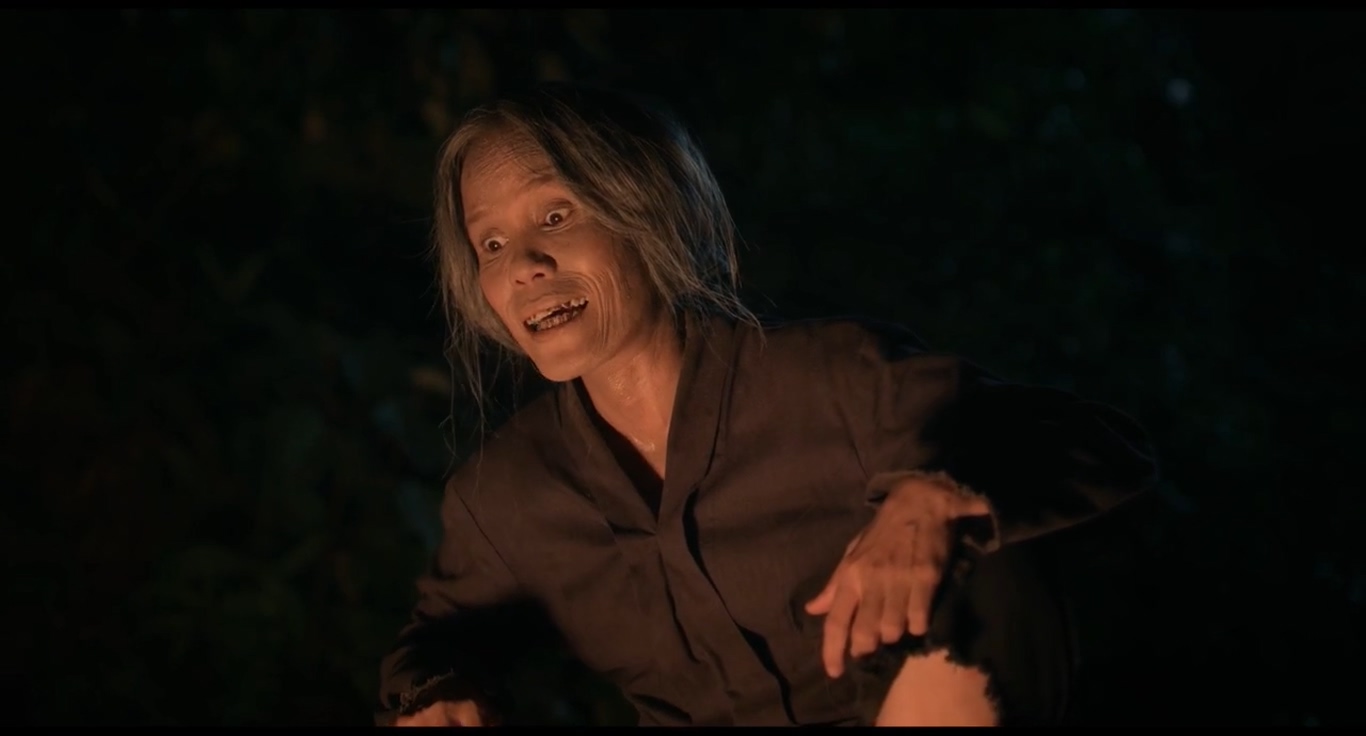 In Islamic traditions, Iblis is figured as an angel who fell from the grace of God. In that description, Iblis may resemble Satan in Christian theology, but whereas Satan is pure evil, some have argued that Iblis holds a more ambivalent position. Iblis, while denounced by God, remains a creation of the almighty. In Malay ethnic culture, too, we find stories of shamans who can control spirits for good or evil purposes. The appearance of Tok resembles that of a witch in western traditions, but she is not quite a witch. It is also revealed that she is the one behind the arson that burned down the village on the other side of the river.

Tok also only possesses and controls children, as is seen in the film. She is the reason behind the wandering girl’s death as well as the death of the family. Before the girl visits the family, she repeatedly stabs a burial in the opening sequence. It seems that the burial is the girl’s own, following the Malay ethnic belief that the spirit lingers near its dead body for several days. Children being the victim of evil is not unnatural in Malay folk tales. The reason may not be found in mythology itself, but the prevalence of young ghosts in folk narratives such as these may indicate the possibility of a previously high infant mortality rate in the region. Hence, it seems like children, as one of the most vulnerable groups of society, are targeted by Tok.

Is Angah Dead or Alive? 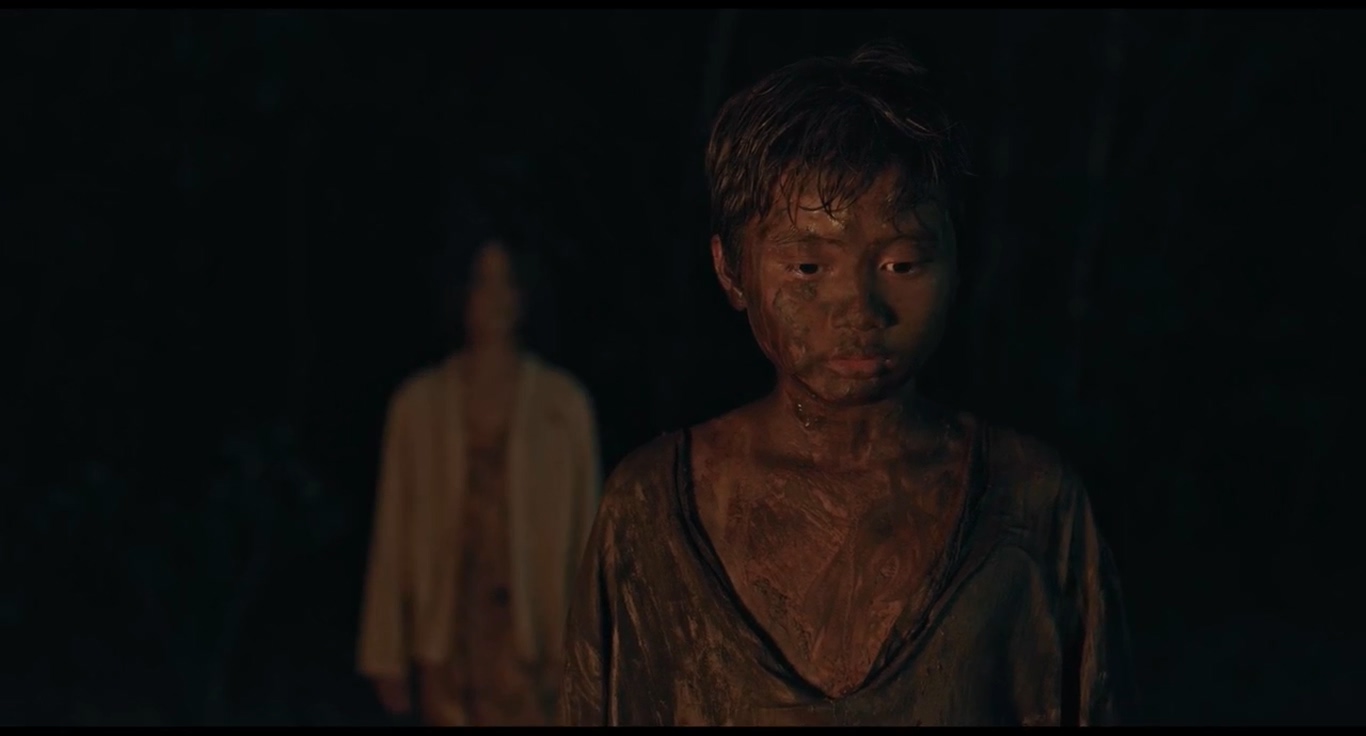 In the mirage kingdom of the jungle, reality often seems to be far from what one sees. In the ending, Angah wanders off into the jungle in search of food, and the hunter kills “him.” But as the story reveals later, he only killed a deer mistaking it for Angah. If we go back a bit, we see a body lying on the floor as Angah asks his mother for food. It seems that Angah has been killed by an evil spirit in the night, and what appears before the camera is only the ghost of Angah. In the end, when Along’s ghost sets the house on fire, she burns Angah’s body along with her mother’s.

Who is the Hunter?

In the early moments, we see a hunter with a spear. After the visual guidance of the dead deer (which is a terrible omen in the Malay culture), we connect the man with the killing of the deer. As Mak tells the story of the ghost hunter, the film makes us believe that he is the fabled hunter of spirits. In a later scene, when the hunter retrieves the body of the girl and goes through a ritual to bring her alive, we sense that he is the father of the girl.

In the end, Mak assails him from behind with his own spear, but as he is still alive during the climax, we sense that he is also a spirit. He is credited in the film as Pemburu, and indeed, we find a spirit called “Hantu Pemburu” in traditional Malay culture. The reported description of the ghost, in the local folklore, somewhat resembles the character in the film as he is seen to be ominously looking upwards a number of times. Although he may be a spirit, in the end, we get the impression that he is a benign spirit not intending any harm.