Ryan Holt From Naked and Afraid: Everything We Know

‘Naked and Afraid’ is a survival reality show on the Discovery Network that pushes contestants unlike any other. Not only are they left in the wild to fend for themselves, but they are also naked and allowed to keep only one item of their choosing to survive. A daunting task for even the most seasoned outdoorsmen, very few attempt the task more than once.

Enter legendary survivalist Ryan Holt, who has been on the challenge not less than five times! Most recently, he embarked on the show’s longest ever challenge, which lasted for 60 days. We decided to catch up with Ryan Holt and see how he spends his time when he’s not battling the wild and what made him into the legendary survivalist that he is today. Let’s get into it!

Ryan Holt: Where is He From?

Ryan Holt hails from the historic resort town of Harrison in southwestern Maine. The younger of two siblings, he grew up in scenic natural surroundings with his brother Tim. He attributes a lot of his lessons to his parents Douglas and Paula, who he says guided him through his childhood. During this time, he and his friend John made a pact to someday join the Marine Corps, and after graduating high school from Oxford Hills Comprehensive, Holt did just that.

Holt went to boot camp in Parris Island, South Carolina, before being sent to the front lines to serve his country. He now lives in the rural mountainous town of Roxbury, in Maine, which has a population of only a few hundred people.

Ryan is currently 36-years-old and runs a hostel and guide service in the mountains of western Maine. His stint in the Marine Corps Infantry lasted from 2003 to 2011, during which he was deployed in Afghanistan and then twice in Iraq. He re-enlisted in 2008 as part of the Chemical Biological Incident Response Force and was based near Washington, D.C., until his honorable discharge in 2011.

Emerging from the Marines mentally shaken, Holt then embarked on a hike across the Appalachian Trail from Georgia to Maine, covering over 2000 miles on foot. The adrenaline junkie used this time to reflect and heal himself, or as he referred to it: “walking off the war.” His long hike earned him the trail name “Yukon,” which he still carries. Holt also embarked on a countrywide road trip in his 1983 Volkswagen bus that eventually led him to the Florida Earth Skills Gathering. It is here that Holt learned the art of fire starting and found an endearing interest in primitive survival skills, which would go on to shape much of his next few years.

It was during his long hike and the six months that he spent immersed in the mountains that gave Holt the idea for The Human-Nature Hostel. It started with him purchasing 42 acres of land in the small rural town of Roxbury, Maine. With the help of friends and family, Holt gradually built a lodge on the land, complete with a geodesic dome. In 2018, the building opened as The Human-Nature Hostel, where he now hosts hikers who are on the Appalachian Trail.

Holt, or “Yukon,” is also a registered Maine guide and organizes hiking trips for veterans through his Wilderness Warrior Project. He created the initiative based on his own experiences with PTSD and the healing effects of nature. Holt also leads workshops that teach survival and bushcraft skills, something he has become popular for after his repeated stints with ‘Naked and Afraid.’ His words describe the survivalist’s vision perfectly: “I dedicate myself to a life of service to all of you and as a steward of the wilderness.”

Holt got introduced to ‘Naked and Afraid’ while attending an intensive survival skills course at the Jack Mountain Bushcraft School in Masardis, Maine. The owner and lead instructor of the school, Tim Smith, was working as a consultant for the survival show during their casting process and asked Holt to apply for it. After being hesitant initially, Holt agreed to do it when he realized that the challenge portrayed on the show was authentic and not staged and would genuinely test his survival skills. 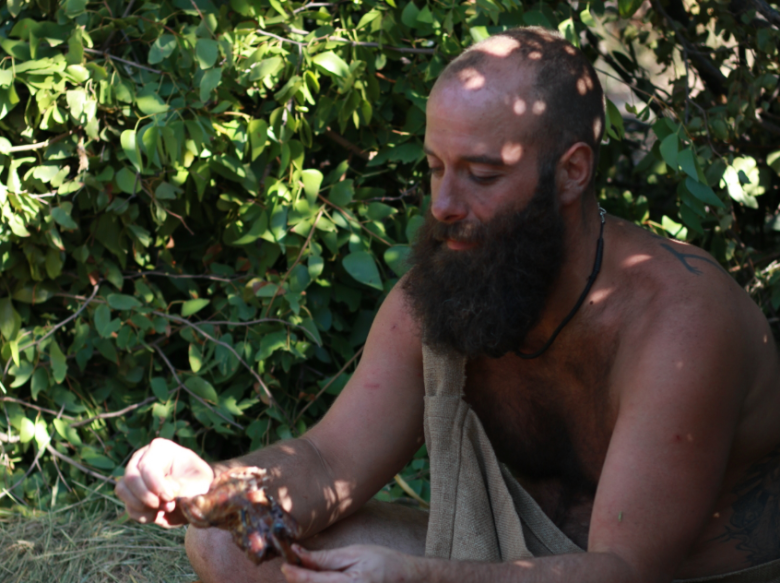 Holt has since gone on to feature on ‘Naked and Afraid’ 5 times. His first stint was in 2015 when he partnered with ex-Army veteran Amber Hargrove to survive the Florida Everglades. He then went on to compete on the 2016 ‘Naked and Afraid XL’ in South Africa, which had contestants spend 40 days (instead of 21 in ‘Naked and Afraid’) in the wilderness. He fell ill during the challenge and was unable to complete it. 2018 saw him on a barren island in the Bahamas surrounded by sharks for the Shark Week special called ‘Naked and Afraid of Sharks.’

In the same year, he went to South Africa for ‘Naked and Afraid: Alone’ in which he had to compete alone, without the customary teammate. Holt’s last stint (so far) had him competing in the most legendary version of the show yet, with contestants spending 60 days in the gator-infested swamps of Louisiana. Only long-time veterans who had appeared on the show multiple times were featured in this installment, and of course, Ryan Holt was one of them. “There is no help, no water, no food, no script, no nothing,” Holt said, speaking about ‘Naked and Afraid.’ “It’s 100 percent real.”

Ryan Holt is seemingly in a relationship with Dani Beau, who is a wilderness-EMT and rock climbing instructor. The two conduct survival skills workshops together, and Dani has also featured on ‘Naked and Afraid’ and ‘Naked and Afraid XL.’ Holt has stated how proud he is of her for completing the challenge as a vegan, which is a daunting task considering that finding enough food is one of the biggest obstacles to finishing it. Dani volunteers in search and rescue operations with her dog Xena. Ryan’s dog Eywa also has an interesting backstory.

Often seen featured with him in photographs, the faithful yellow labrador is a specially trained veteran service animal. Eywa was trained by a high school senior from Holt’s alma mater, Oxford Hills High School. The student was helped by Lynda Knowlton, a law enforcement and military preparation teacher of the school who has been training dogs for over 37 years.

Eywa joined Holt just as he was finishing building his house, and acts as a search and rescue dog in mountainous Roxbury, which Holt now calls home. Although the two haven’t posted a picture together for the last few years, we can’t be certain about the current status of their relationship.

Read More: Where is Naked and Afraid XL Season 7 Filmed?