Santo Ending, Explained: Who is Santo? Will Santo Kill Lucía? 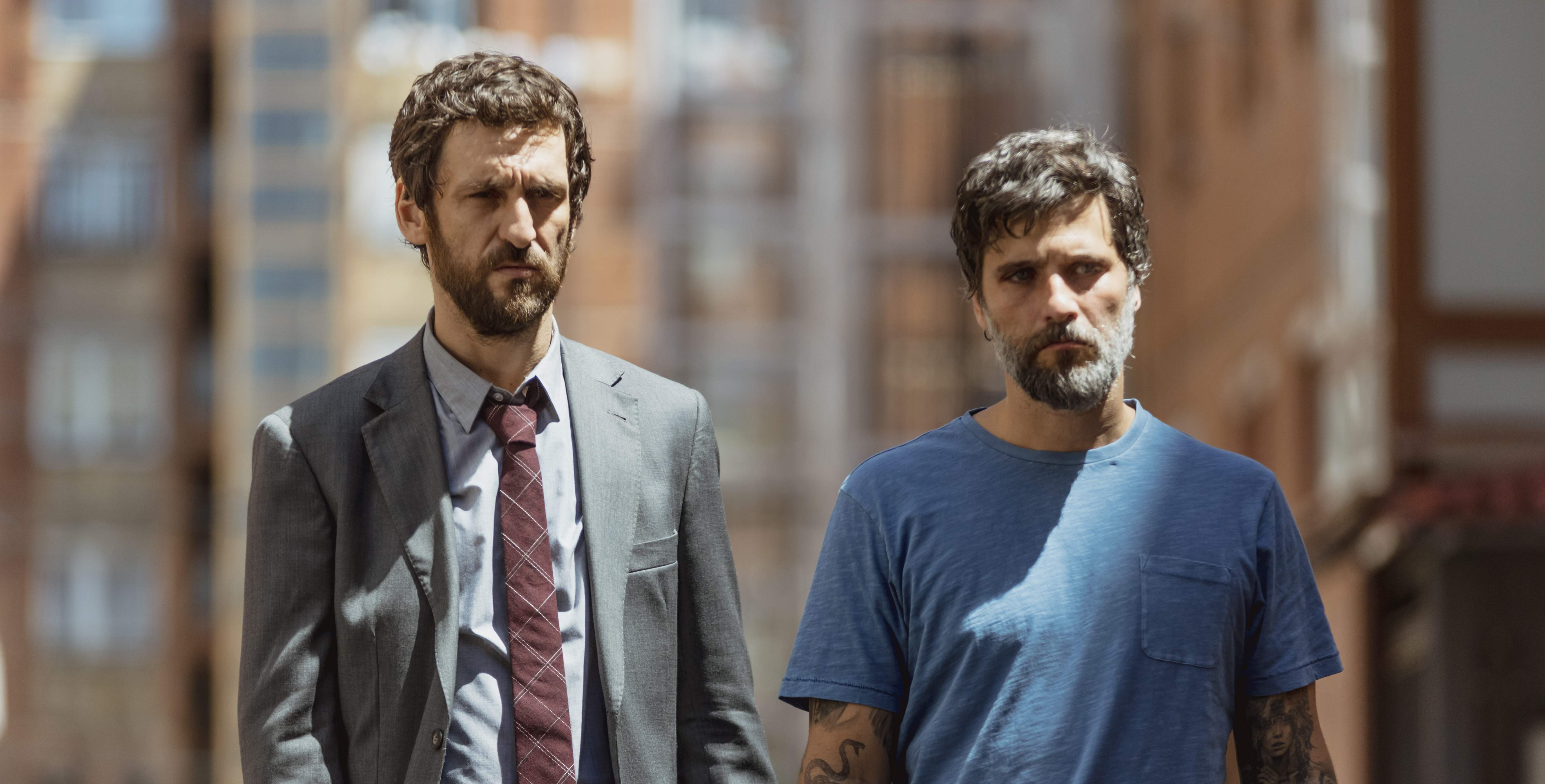 Created by Carlos López, Netflix’s crime series ‘Santo’ follows Miguel Millán and Ernesto Cardona, two police officers from Spain and Brazil respectively, whose paths cross when they set out to capture Santo, an invisible drug lord. When Santo arrives in Madrid to set up a new drug empire with the aid of occult practices, Cardona ends up in the Spanish capital with Bárbara, Santo’s mistress, to find him and exact his vengeance on him for killing his partner Vera. The first season of the engrossing Spanish series ends with astounding revelations and developments concerning Santo’s identity and plans. If you are interested in a magnified look at the same, let us share our thoughts! SPOILERS AHEAD.

‘Santo’ begins with the murders of local drug dealer Cristóbal and his son Mario. Police Officer Miguel Millán, who also works for the local drug mafia that includes Cristóbal, sets out to find the murderers with his colleague Susi for the sake of Cristóbal’s wife Maria, with whom he is having an affair. Millán and Susi’s investigation leads them to three Norwegians who also try to kill the former. Millán and Susi discover that the Norwegians are men controlled by Santo, a Brazilian drug lord without a known face or any additional information concerning his identity. In Salvador, located in the state of Bahia, Brazil, a police officer named Ernesto Cardona joins Santo’s narcotics ring as an undercover agent.

Cardona’s cover gets eventually blown, jeopardizing his mission. Still, he gets another chance to find Santo through Bárbara, Santo’s mistress, who seeks the police’s help to escape from the invisible drug lord. Cardona and Bárbara elope to Spain for safety but get abducted by Santo. Millán, while investigating Santo, ends up rescuing Cardona from a warehouse the drug lord used to sacrifice human beings for his betterment and safety. They eventually find Bárbara but Cardona and Bárbara choose to run away from the authorities and seek shelter in a hideout rather than associating with the police.

Cardona struggles to move on from the death of Vera, who had introduced him to Exu, a spirit connected to African-derived traditions. As a believer, he gains the “thread of Exu,” which he wears for his safety. He also gets intrusive thoughts about killing a child for Santo’s human sacrifice under the influence of the latter’s occult practices. Meanwhile, Millán’s superiors discover that he has ties with a local narcotics ring. Still, he manages to fabricate a story to continue the investigation for Maria. At the same time, a group of children gets abducted by Santo’s men for more sacrifices.

Paulo, Cardona’s colleague in Brazil, arrives in Madrid to help him. However, he gets killed in an encounter with Santo’s men, who takes Bárbara with them to the warehouse. The Norwegians abduct Millán and they end up in the same warehouse since Santo wants Millán to kill a child as a sacrifice. Cardona intervenes and stops the sacrifice. Susi, who arrives at the warehouse, saves the abducted children while Cardona and Millán try to find Santo.

Santo Season 1 Ending: Who is Santo?

Even though Santo is one of the most notorious drug lords in the world, not even his closest acquaintances haven’t seen him. Police departments of several countries fail to even find a single photograph of the criminal. But Santo has always been around them since Bárbara is Santo. The notion and image of a potent, masculine, and invisible drug lord was Bárbara’s creation to distract her enemies, competitors, and police officials. Creating such a figure also helps Bárbara to pretend to be Santo’s fugitive and distract officers like Millán and Cardona by being with them, coming to know about their every move.

Bárbara knows that she cannot create an international narcotics ring as a woman in the world of imposing men. She must have realized the danger of someone trying to “dethrone” her from the empire she had created if she comes out as the real leader of her drug network. Thus, conceiving a powerful masculine figure becomes an absolute necessity for her. Bárbara’s survival among her own men depends upon the latter’s fear of such a masculine entity as they wouldn’t dare to harm the mistress of Santo. The pretense of being the mistress of Santo also allows her to control and dictate her men since she is recognized as the person who is closest to the imaginary Santo.

Through the imaginary Santo, Bárbara is also taking advantage of the inherent human fear of the “invisible.” Since nobody in the world can accurately judge the power and authority of an imaginary entity, Santo remains an authoritative, enigmatic, and scary figure even among Bárbara’s competitors and government authorities of several nations. She is capitalizing on the human nature of being fearful about the inexplicable and invisible. The addition of occult practices and other supernatural activities further add to the myth of Santo, marking the success of Bárbara’s creation.

Although Millán and Cardona realize that Bárbara is Santo, they fail to capture her, paving the way for her escape. Millán, who gets assaulted by the drug lord’s men, gets hospitalized as well. While he is admitted to a hospital, Bárbara sends him a video of Lucía at her gunpoint. Even though Lucía’s fate is in the hands of Bárbara, the latter may not be in a haste to kill her. Bárbara sending the video to the police officer instead of killing his daughter right away indicates that the drug lord has some unfinished plans concerning Millán. Lucía very well can be the bait Bárbara is using to take advantage of the police officer.

As Bárbara is all set to establish her own drug kingdom in Spain, Millán may turn out to be a useful addition to her team, especially considering her vulnerable position. No authorities have ever succeeded in unraveling the truth behind Santo until Millán and Cardona do, which indicates that Bárbara is losing her strength. At such a point, having someone like Millán on her side will be advantageous for her to continue trafficking drugs in Spain. Thus, Bárbara is expected to blackmail the police officer using Lucía.

Since Millán has put his life on the line to conquer Santo, his superiors may allow him to continue his investigation and capture Santo. If that’s the case, serving Bárbara can be the prize Millán has to pay to protect his daughter. As someone who has assisted local drug lords before for money, the police officer may not have any moral conflicts concerning helping Bárbara if he is gaining from the same.

Why Does Cardona Save Santo/Bárbara?

After Bárbara’s revelation that she is Santo, Millán aims to shoot her down for the sake of fulfilling his promise to Maria. However, Cardona interferes and gives time for Bárbara to escape. After “rescuing” Bárbara from Santo, Cardona starts to nature an intimate connection with her. The days of hiding together and fighting the common enemy further add to that attachment. Cardona can be having feelings for Bárbara even after realizing that she is Santo. Cardona arrives in Spain with the wish to exact his vengeance on the person who killed his partner Vera.

By the time of Cardona’s realization that Santo is Bárbara, the rage in him has died. Cardona doesn’t have any other reason to save the person who killed Vera, her nephew, and a part of himself by making him a “child killer.” Cardona may want to kill Bárbara himself rather than leave the job to Millán. But the Brazilian doesn’t show any aggression to kill her after stopping Millán, which indicates that Cardona’s feelings for Bárbara must have influenced his actions.

Read More: Is Netflix’s Santo Based on a True Story?