Shards of Her Ending, Explained: Does Hsiao-liu Really Exist?

Directed by Li Cho, Netflix’s drama series ‘Shards of Her’ follows the life of Lin Chen-hsi, who gets forced to relive her childhood trauma and its aftereffects upon getting into an accident. Although Chen-hsi survives the accident, she ends up in an alternative reality, restarting her life in the past. With little to no recollection of what really happened to her, Chen-hsi sets out to unravel the mystery behind her past and the misfortunes that changed her life. Starring Wei-Ning Hsu as Chen-hsi, the Taiwanese series ends with several revelations and developments that are guaranteed to confuse the viewers. If you are trying to make sense of the same, let us be your ally! SPOILERS AHEAD.

Shards of Her Recap

‘Shards of Her’ begins with Lin Chen-hsi, a reputed headhunter working for the company named Polar, getting introduced to Danny, one of the cousins of her boss. Danny, fearing that Chen-hsi will become a partner of the company instead of him, tries to scare her off from the establishment. He tries to rape her to terrorize her but she manages to escape from him. On her way back from the company, her car gets hit by a truck. When Chen-hsi wakes up, she is at her house in her hometown in Yilan County instead of Taipei. She gets astounded to see her dead father Lin Yung-sheng and brother Lin Chen-ye alive. Chen-hsi starts to perceive that she has been transported back to her past.

From her parents, Chen-hsi learns that her physics teacher Hsieh Chih-chung was killed, possibly by her classmate Yen Sheng-hua. She also recollects her memories with her school friends. Meanwhile, she inadvertently meets the police officer who investigates Hsieh’s murder, Hsiao-liu. Chen-hsi gets shocked when she realizes the police officer looks exactly like Li Hao-ming, her boyfriend. Since she is missing Hao-ming severely, she decides to spend her time with Hsiao-liu by agreeing to help him solve the murder case with whatever she can recollect about the suspect.

Upon collecting all the evidence concerning the murder case, Hsiao-liu realizes that Hsieh’s murderer is a man and Sheng-hua can only be an accomplice. The police officer follows Chen-hsi for any clues and ends up at her father Yung-sheng’s orchards in the mountains. Yung-sheng, who has been sheltering Sheng-hua, encounters the police officer and holds him captive. Yung-sheng lets the police officer knows that he is responsible for the teacher’s murder and he is planning to turn himself in after confirming that Sheng-hua is safe. However, Sheng-hua confesses to killing her teacher before Yung-sheng can protect her.

Hsiao-liu, not convinced that Sheng-hua was able to kill Hsieh all alone, turns his attention towards Chen-hsi’s brother Chen-ye, who has been acting suspiciously whenever he meets him. Meanwhile, Chen-hsi demands to know what exactly happened to her when she was a child. Her mother Chiu Wan-fen and Chen-ye try to stop her but a fight ensues, only for Chen-hsi to hit her head on the floor. The memories she lost back to her consciousness and she recollects that Hsieh raped her when she was in the ninth grade. She also remembers that Sheng-hua was raped by him as well.

Shards of Her Ending: Is Chen-hsi Really in an Alternative Reality? Does Hsiao-liu Really Exist?

No, Chen-hsi is not in an alternative reality. Every event and occurrence that happens in Chen-hsi’s life after the accident is conceived by her mind as an aftermath of the accident. After getting raped by Hsieh, Chen-hsi was only able to run away from Yilan County to Taipei since nobody was considerate enough to believe her, including her own father Yung-sheng. Because of Hsieh’s reputation as a model teacher, everybody considered Chen-hsi’s allegation of getting raped by him as a lie or misunderstanding. When Chen-hsi gets into the accident, her mind starts to conceive another reality inside her mind for her to seek a resolution to what happened to her as a child. 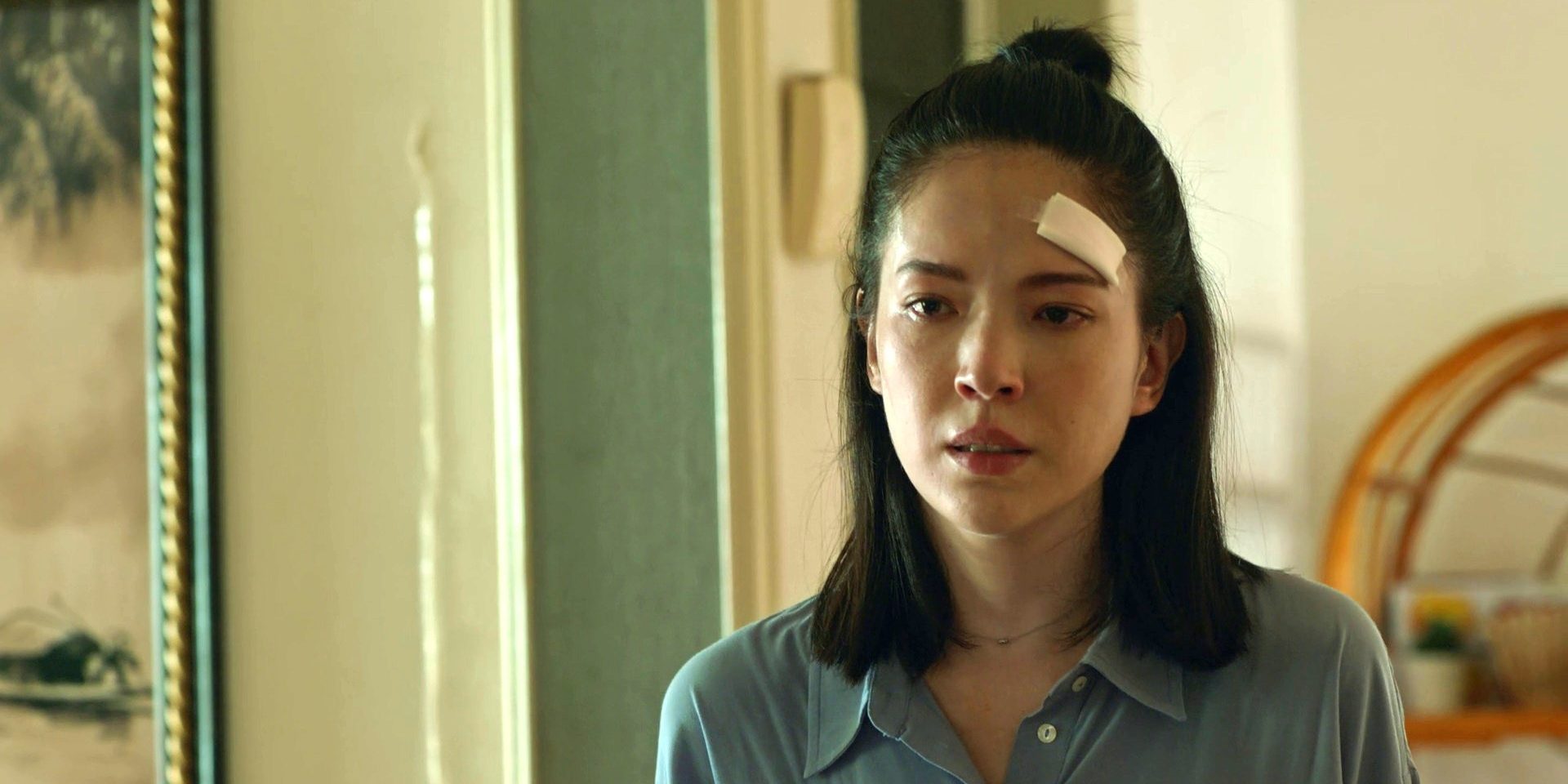 When Chen-hsi was raped, Chen-ye or Yung-sheng didn’t support or protect her anyway. She was deeply disappointed to see how they, whom she loved dearly, easily failed her as a brother and father respectively. Chen-hsi tries to erase such memory by creating an alternative reality in which her brother kills her rapist and her father tries his best to protect her family after the murder. Sheng-hua, who didn’t step up to fight against Hsieh also becomes a part of the same as her brother and father’s accomplice. Chen-hsi’s mind succeeds in making her feel that she wasn’t abandoned, at least temporarily, by creating such an “alternative reality.”

Likewise, Hsiao-liu only exists in her mind. During their relationship, Chen-hsi has never acknowledged the lengths Hao-ming has gone to make her feel comfortable. She hasn’t been able to express any sort of gratitude towards him as well. After the accident, Chen-hsi’s mind tries to right the wrong she has done to Hao-ming by creating a person who looks exactly like the former. Like Hao-ming, Hsiao-liu tries his best to protect Chen-hsi, even if it means putting his life on the line for her. Although she has failed to appreciate Hao-ming for everything he has done for her in reality, she acknowledges his actions to Hsiao-liu, the imaginary counterpart of her boyfriend.

The roots of Chen-hsi’s imaginary reality lie in how people treated her when she was a child. As a girl, she was neither believed nor expected to prove her allegations right. The people around her, including her parents, wanted her to be silent so that her future will not be affected. They didn’t want the world to know that Chen-hsi is a rape survivor. To fulfill their wishes, they sacrificed Chen-hsi’s peace of mind and forced her to repress the truth. When her head gets badly hurt due to the accident, her repressed past and wish to see others step up for her materialize as another reality in her mind.

Is Hsieh Dead or Alive? Did Mrs. Hsieh Kill Chen-ye?

No, Hsieh is not dead. Like the implausible reality, Hsieh’s death in the same is also an imagination of Chen-hsi’s mind. After getting raped by Hsieh, Chen-hsi wanted to prove her allegations right. She wanted to bring him to justice for destroying her life and leaving her powerless. But when Sheng-hua decided to not follow the same, all Chen-hsi managed to do was run away from Yilan County. Thus, her mind conceives an imaginary narrative in which Hseih and his wife suffer for their actions. Hsieh’s imaginary death is Chen-hsi’s way of exacting her vengeance on him.

When Chen-hsi was raped, Mrs. Hsieh, who was supposed to protect her like a mother, started to blame her for what really happened. She started to spread the narrative that Chen-hsi tried to seduce her husband. As a powerless girl, Chen-hsi couldn’t do anything about the same. The repressed disappointment and anger concerning the same come out of her as visions of Hsieh’s death and Mrs. Hsieh’s sufferings after the death of her husband. Similarly, Chen-ye’s death is also created by her mind to eliminate her anger and disappointment.

When Chen-hsi and Chen-ye were children, they were extremely close. They both considered themselves as two bodies and one soul. However, when Chen-hsi got raped, her brother didn’t step forward to protect her. Chen-hsi abandoned him by moving to Taipei as well. Through her imaginary reality, Chen-hsi replaces the painful truth by seeing her brother avenging her suffering by killing her rapist. She seeks solace in her imagination, in which Chen-ye dies for her rather than doing nothing to protect her. In reality, he died upon getting into an accident.

Although Hao-ming has always tried his best to keep his relationship with Chen-hsi afloat irrespective of the challenges they have faced, Chen-hsi hasn’t put any such effort in the same. She has been believing that her past will never cease to haunt her and it will only make Hao-ming’s life miserable. After her separation from Chiang-yuan, who broke up with her because he couldn’t manage her past affecting their lives anymore, Chen-hsi fears that her relationship with Hao-ming will have a similar ending.

But Chen-hsi’s past makes Hao-ming protect her more than part ways with her. He realizes that Chen-hsi’s coldness towards him is not personal but a repercussion of her suffering. As far as Hao-ming is concerned, abandoning Chen-hsi, forcing her to fight her past all alone, is not even an option. Even when Chen-hsi informs him that she cannot maintain a relationship while dealing with her past, Hao-ming reaffirms his love for her and continues to be a supporting presence in her life without forcing the need for a relationship.

Chen-hsi and Hao-ming may not end up together soon since the former is not at all ready for committing herself to a relationship and partner. She may need to prioritize fighting the demons of her past at the moment rather than cherishing her companionship with Hao-ming. But when she is ready for a relationship, it is sure that Hao-ming will be there for her. He is waiting for her to gradually reach a stage where a relationship will not be a burden for her. Considering that Chen-hsi is making progress in dealing with her past, specifically by meeting her school friends, she most likely will restart sharing her life with Hao-ming as his girlfriend or wife.