Shikimori’s Not Just a Cutie Episode 2 Recap and Ending, Explained 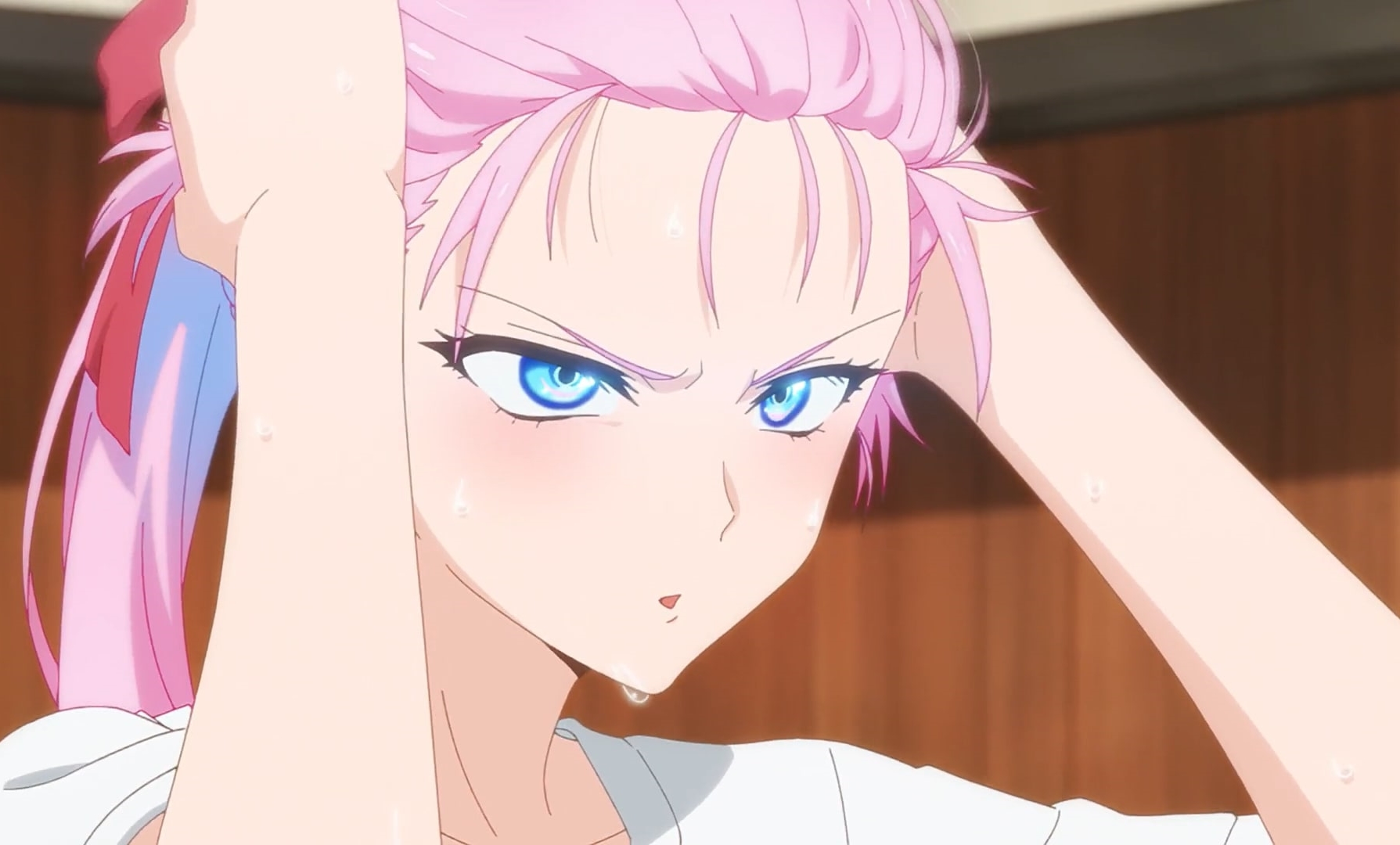 In ‘Shikimori’s Not Just a Cutie‘ or ‘Kawaii dake ja Nai Shikimori-san’ episode 2 titled ‘Wind and Clouds, Ball Sports Tournament!’ Shikimori and Izumi’s class has a sports tournament in which boys play football while the girls compete in volleyball and basketball. Izumi gets into all kinds of trouble but does not have Shikimori on his side to protect him. That’s why Inuzuka steps in his girlfriends’ shoes and manages to protect Izumi in several instances but gets himself hurt in the process. Here’s everything you need to know about the ending of ‘Shikimori’s Not Just a Cutie’ episode 2. SPOILERS AHEAD!

Izumi and Inuzuka discuss the upcoming sports competition in which their class will be competing with others when Shikimori arrives and tells her boyfriend that she is on the volleyball team. Izumi is mesmerized by her cuteness and appears pleased with her new hairstyle, although Inuzuka believes that it will hamper her game. Nekozaki explains that all of them have decided to have a similar one as a mark of solidarity and to instill the feeling of teamwork. Since the boys are going to play football, Shikimori is curious about the game timing so that she can cheer her boyfriend. 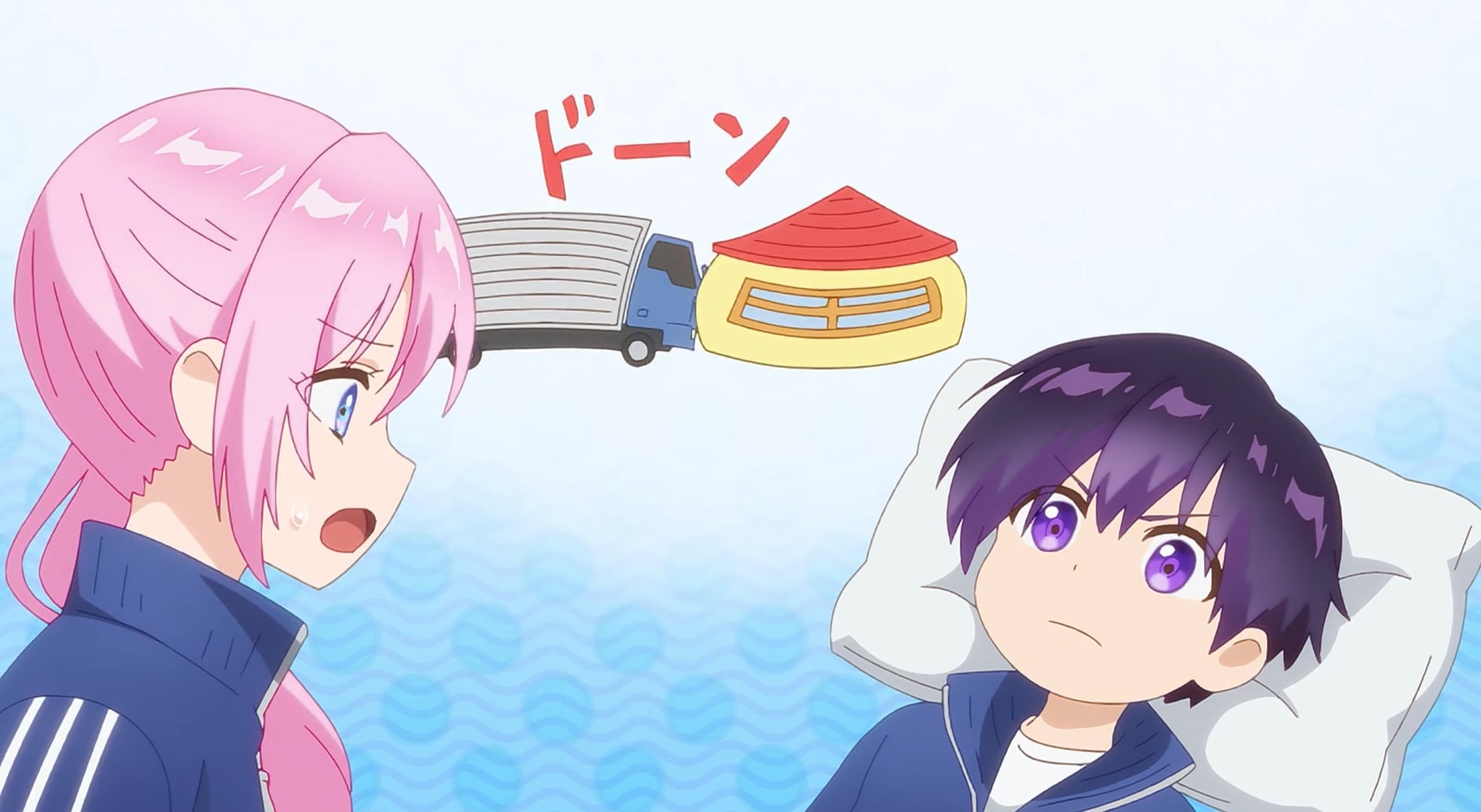 Izumi is clueless, so they check the timetable together and are shocked to learn that the first volleyball and football game will be played at the same time. While they are disappointed that they won’t be cheering for one another, the couple give best wishes to one another. Later, Shikimori attends the boy’s football practice and worries about Izumi’s well-being.

Just when she is hoping that he does not get injured, her boyfriend fails to notice a ball coming from behind, and by the time he turns, he gets hit right in the face. Izumi is then taken to the school’s clinic, where he gets some rest. Even though the volleyball match is about to start, Shikimori tells Nekozaki that she will join her as soon as possible just to be on her boyfriend’s side and ensure that he is safe.

Although Shikimori is concerned, Izumi reassures her that he is doing okay. That’s when his girlfriend notices that Izumi has scars all over his body. When she asks him, he explains that he got them when a truck rammed into his house. By this time, Shikimori had herself witnessed him getting into all kinds of strange trouble, so his explanation did not shock her in the slightest. During the warmup for the game, Shikimori notices everyone is excited to meet a girl. Nekozaki explains that she is Kamiya, the ace of the volleyball club, and will be playing against their team in the match. 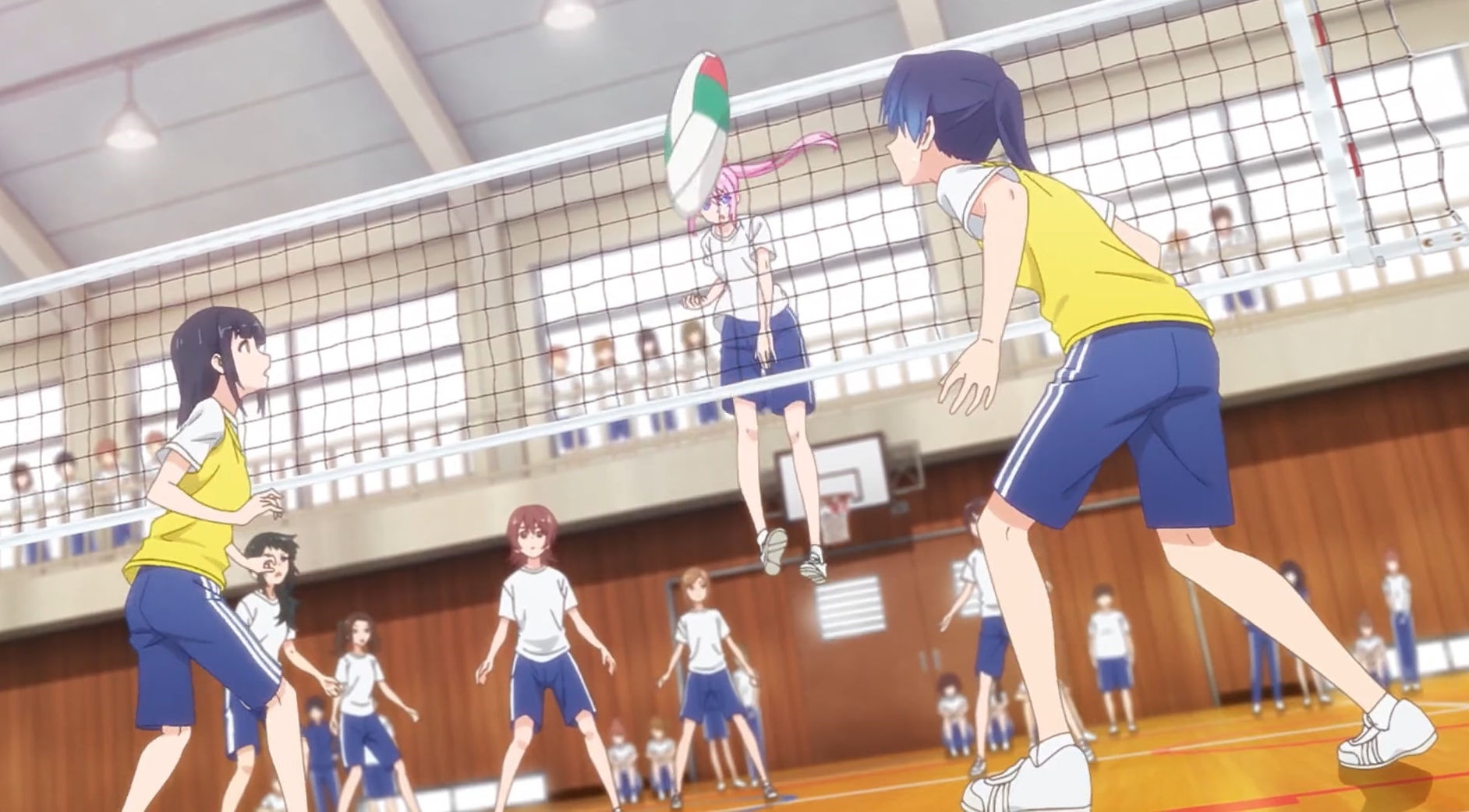 After he feels better, Izumi joins his team. They give their best on the field, and as soon as the match is over, they decide to go and watch the volleyball game. When they arrive at the indoor court, Kamiya is single-handedly dominating Shikimori’s team. When it seems that Izumi’s classmates are bound to lose the game, he starts cheering his girlfriend and instills a new confidence in her. Shikimori responds immediately and turns the game on its head. Kamiya’s team fails to stop her, and Izumi’s classmates win the game in the end.

Shikimori’s Not Just a Cutie Episode 2 Ending: What are the Implications of Shikimori’s Newfound Fame on the Couple’s Relationship?

After the volleyball competition is over, Shikimori is visited by a lot of fans from different classes in the school who have watched her remarkable game that day and wants to take pictures with her. The newfound fame is overwhelming for her, but she tries her best to give everyone some time and listen to their polite requests. Unfortunately, with so much going on, she cannot look after Izumi like she usually does, and he continues to get in trouble. Meanwhile, in the following days, Shikimori becomes the hero of the school. 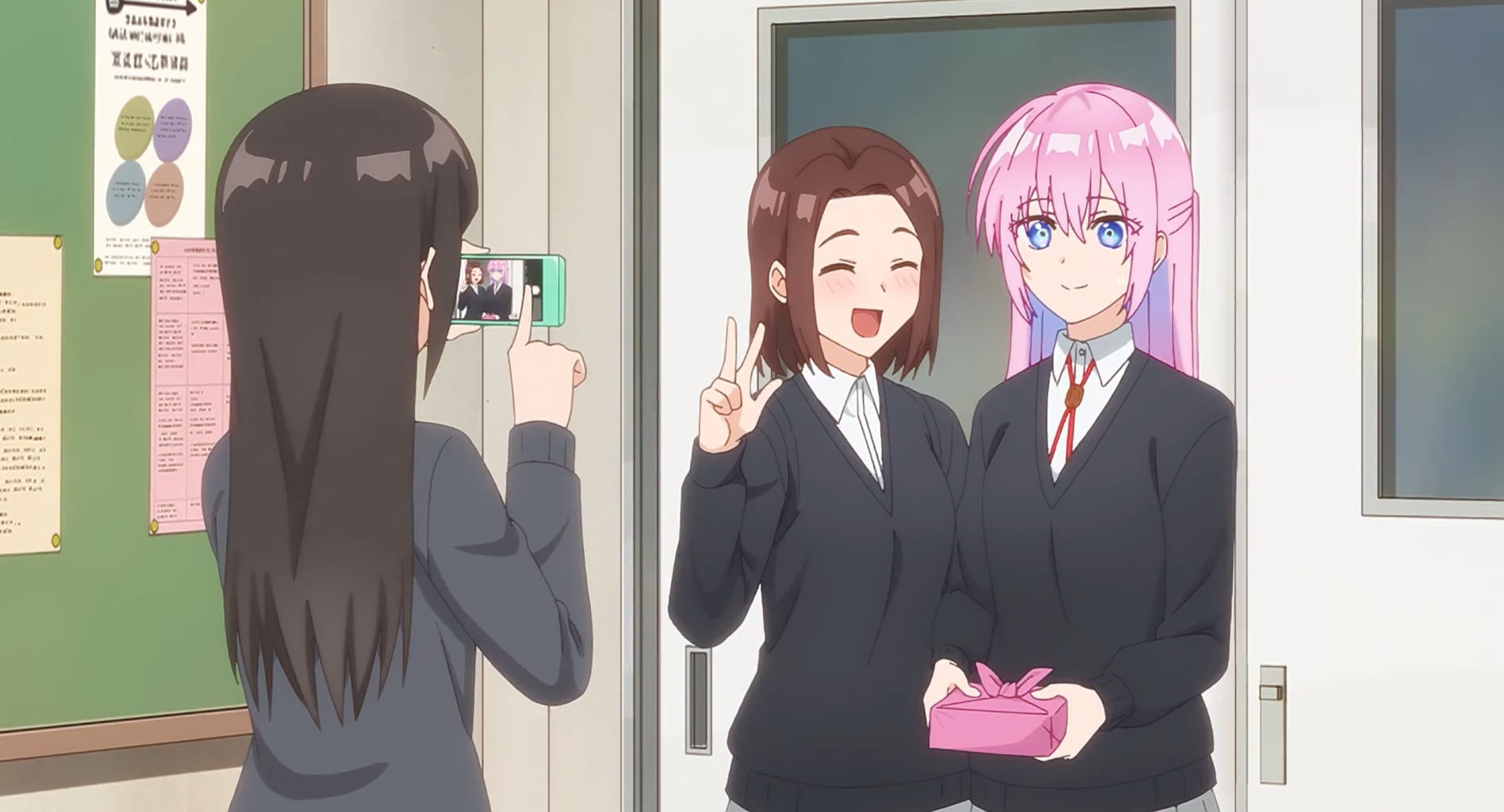 One day when she is taking pictures with someone, Inuzuka saves Izumi from a ball that flies into the classroom from the window. However, he gets himself injured in the process. The commotion draws everyone’s attention toward the two, and Shikimori sees Izumi tending to his friends’ injuries. While Izumi may just be concerned about Inuzuka’s well-being, Shikimori grows jealous and appears to feel replaced. As strange as her conclusions may be, the couple has started to drift apart in the light of Shikimori’s growing fame. So, it’s understandable why she feels insecure at the moment.

Meanwhile, Izumi is also struggling without his girlfriend but keeps his feelings to himself. In the last few days, he has gotten into trouble several times, but luckily, Inuzuka has been there for him. Although he is glad for the help he has received deep down, Izumi appears to be missing his girlfriend, who has little time for him because of her fans. In all the chaos and misunderstanding, he does not realize that they have even stopped going back home together. 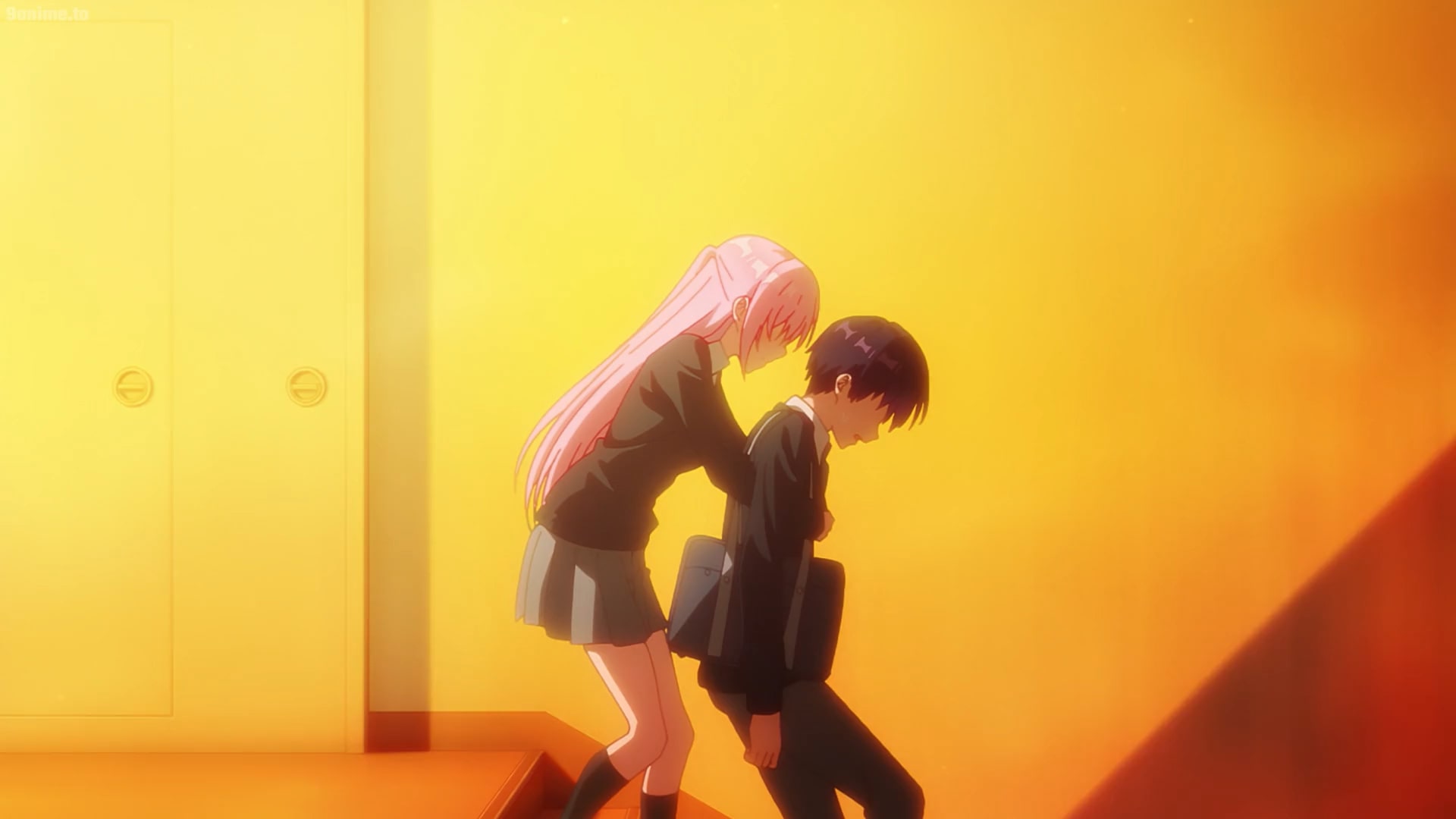 However, Inuzuka saving Izumi in front of Shikimori finally does the trick and makes the protagonist realize that she needs to be around his boyfriend more. Keeping her jealousy and insecurities aside, she follows Izumi just when he is about to leave for home and manages to save him from a serious injury as he misses a step on the staircase and is about to fall. The couple may have drifted apart for a few days, but it appears that they now have a newfound respect and admiration for each other, which will naturally bring them close in the long run.

Read More: Is Shikimori’s Not Just a Cutie on Netflix, Hulu, Crunchyroll, or Funimation?