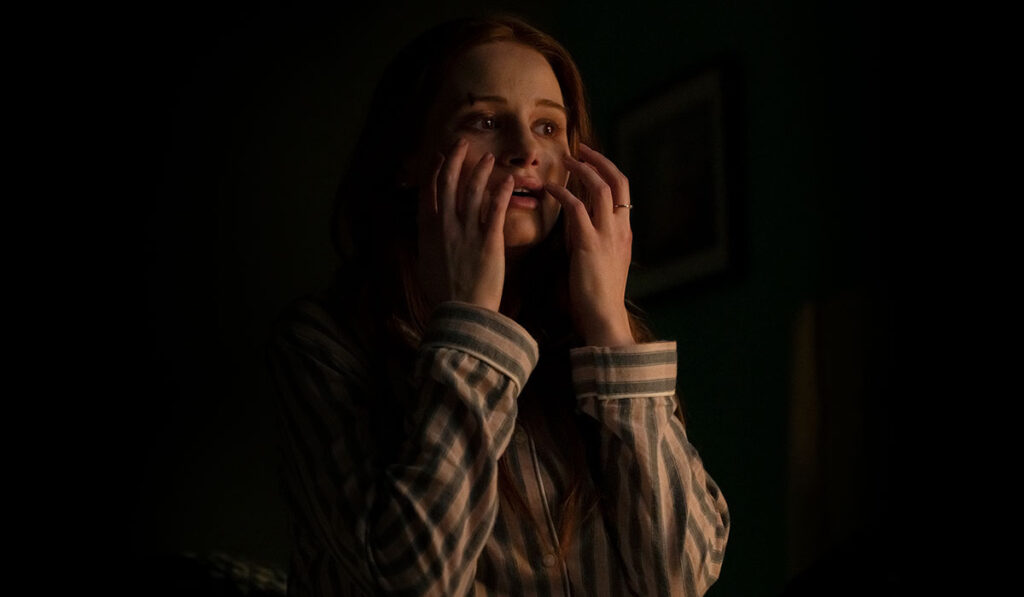 ‘Sightless’ is a Hitchcockian-style psychological thriller film that’s written and directed by Cooper Karl, adapted from his short film of the same name. Madelaine Petsch (of ‘Riverdale‘ fame) stars as a formerly famous violinist who gets attacked one fateful night and, as a result, loses her eyesight permanently. As she tries to adjust to her new and perpetually dark reality, she doubts everything and everyone, especially when her next-door neighbor tells her not to trust anyone.

With clever camera angles and strangely evasive shots, the audience is made to feel a sense of unsettling disorientation, much like the protagonist must be feeling, only amplified tenfold. Her distorted perception of reality is portrayed through the morphing people around her. What we see is her perceived reality and not the actual reality. If you’re looking for greater insight into the confusing ending of ‘Sightless,’ you’ve come to the right place. Let’s take you through a short synopsis of the film’s plot before discussing the ending. SPOILERS AHEAD.

Ellen Ashland, a former celebrity violinist, is attacked one night, and the chemical her assailant sprays at her leaves her irreparably blind. Having lost her eyesight forever, Ellen is understandably distraught and only reluctantly accepts her altered situation. Her brother, who works overseas, arranges for a new apartment and hires a caregiver by the name of Clayton. As the bright and cheerful Clayton helps Ellen adjust to her new reality and slowly teaches her how to navigate through her apartment (and life, in general) without her eyesight, the two form a close bond. When strange and suspicious happenings start to occur all around Ellen, she cannot tell whether her perceived reality is real or not. 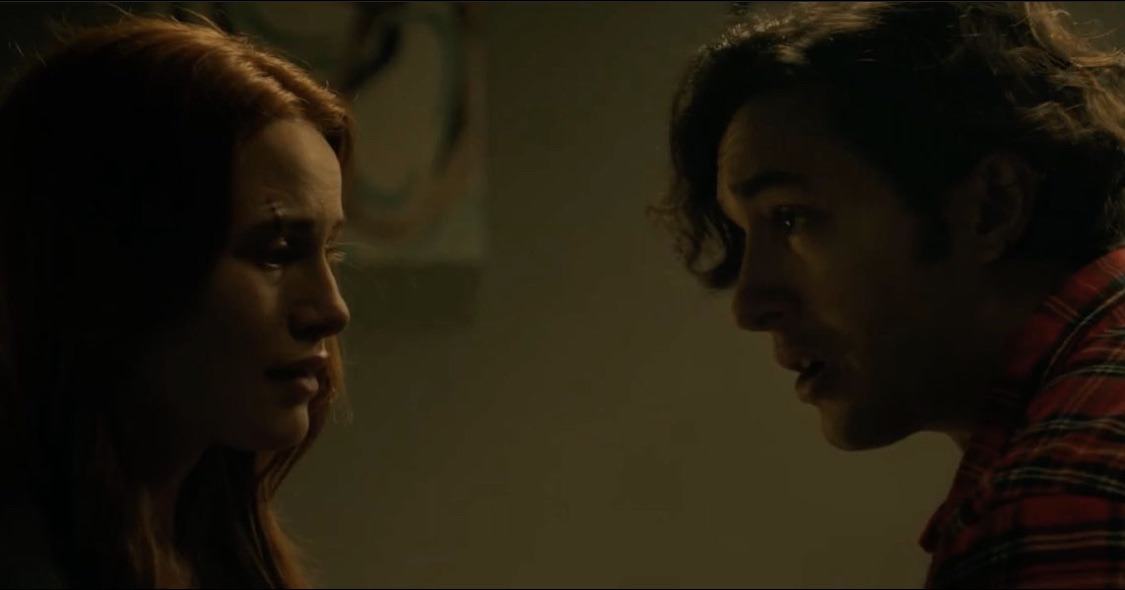 She hears her next-door neighbor being abused and calls the police but is told that all is fine with the woman in the apartment next to her. Ellen is also attacked again, this time by an intruder in her home, but the investigating officer informs her there’s nobody on the security camera footage. Lana, the girl from next door, tells her not to trust anyone. But Ellen is not sure if it applies to Clayton as well. When a failed suicide attempt leads to Ellen finding out that her balcony does not open to the world outside but a padded room with nowhere to escape, she figures out that Clayton and all the other people she has interacted with are deliberately keeping her locked up.

Sightless Ending: Why is Clayton Obsessed With Ellen? 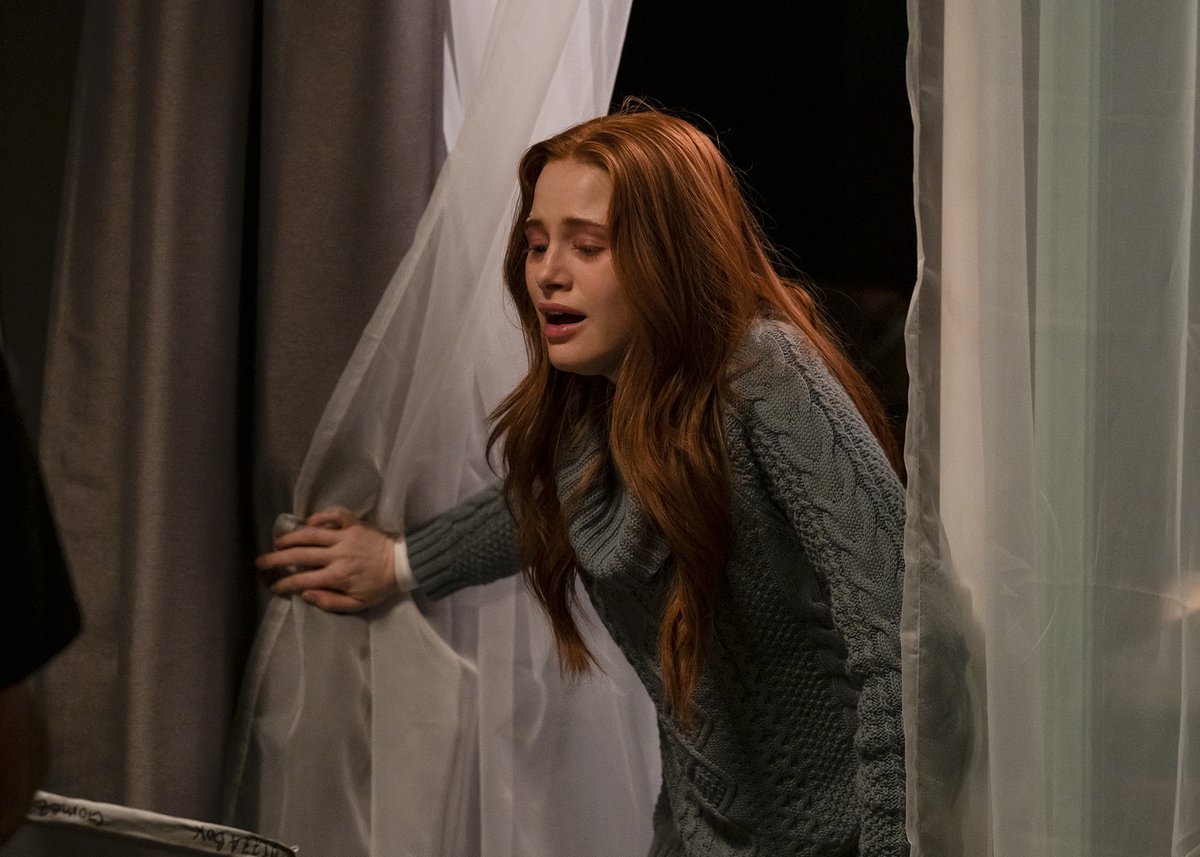 As Ellen is trying to escape, Clayton catches up to her, knocks her out, and then drags her into his room. It’s the room that Lana had previously mentioned contains the only way out through a vent in the wall. Ellen feels the air from the vent and realizes that she has yet another chance to escape. Clayton launches into a monologue explaining his actions.

When he was a kid, his father had locked him and his sister, Lana, up in the attic, holding them captive for three years after their mother had died. The only way Clayton had survived was by making up characters in his head, giving them backstories, and pretending to be them. But what had truly saved him was Ellen’s music that Lana played for them in the attic. So now, Clayton is obsessed with “saving” Ellen.

As he relays his story and motives, Ellen grabs a chance to decapacitate him with the taser and opens the vent but discovers that it’s too small for her to crawl through. Taped inside the vent, Ellen finds a small vial of the same substance that had blinded her. When Clayton comes around again, she sprays the substance in his eyes, effectively blinding him too. As Clayton writhes in pain, Lana arrives on the scene and frees Ellen, sending her out into the real world. Six months later, Ellen prepares to take the stage again.

Who is the Attacker Who Blinded Ellen?

While it’s true that Lana helped Clayton kidnap Ellen, he was the one who donned the mask and the wig to attack her with the chemical. Ellen finds her assailant’s “outfit” hanging on a clothes rack with all the other characters’ costumes, so it’s pretty clear that it is Clayton who blinded Ellen, even though they don’t state it explicitly. Finding all the different costumes only reaffirms Ellen’s suspicions that all the people she had been interacting with – the doctor, detective, neighbor (everyone apart from Lana) – have all been Clayton.

The first clue that Ellen is not actually where she believes she is comes when Clayton gives her the bird and tells her that its color is whatever Ellen imagines it to be. He means this literally. As a blind person, Ellen can only perceive her surroundings, and she imagines things to be a certain way. The actual reality may be quite different than what she imagines.

Why Do the People Keep Switching?

This is possibly the most disorienting and unsettling part of the film – characters suddenly morphing or switching into someone else. This was the director’s way of giving the viewers a taste of what it may be like for Ellen. Throughout the movie, we see whatever Ellen perceives as reality. So when the elevator opens, and she imagines the person getting out is Lana, we see Lana as well. But as soon as Ellen touches her shoulder, she realizes it’s a man, possibly Lana’s abusive husband, so the character switches, and we then see Lana’s menacing husband too. Of course, it’s all Clayton in reality, but Ellen catches on to that truth much later in the movie. That’s the reason we also do not see that Clayton is the doctor, the nurse, the detective, and the neighbor.