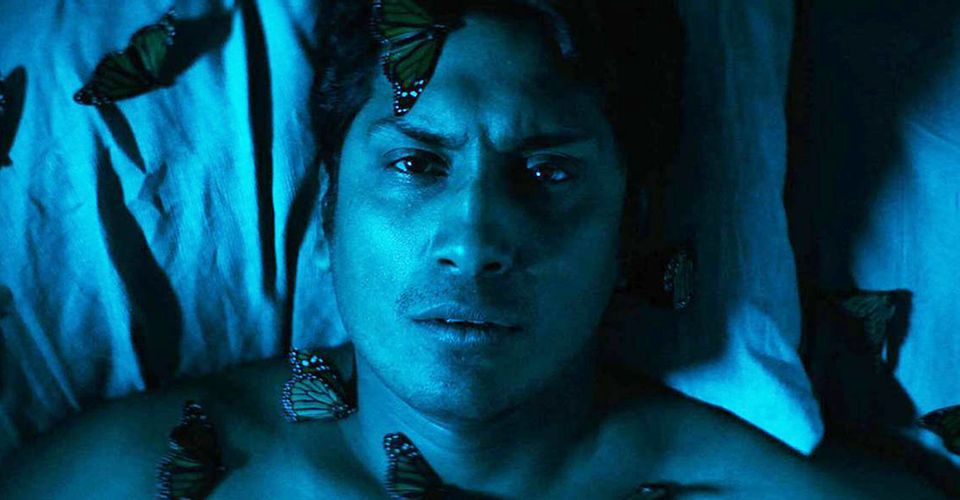 A fascinating mix of science, emotions, natural wonders, and magical realism, ‘Son of Monarchs’ is a Mexican-American film that follows the journey of Mendel, a New York City-based biologist, who struggles with his childhood trauma and immigrant identity. When he returns home for his grandmother’s funeral, Mendel realizes how distant he feels from the place of his youth despite it being an integral part of his personality and career. With Alexis Gambis as the writer and director, this Spanish film peppered with English explores important themes of cultural identity, environmental conservation, familial dynamics, and human-nature interactions.

The insightful film beautifully portrays the interconnectedness of scientific inquiry, societal norms, personal beliefs, hybrid identities, and environmental degradation. Through Mendel’s experiences, we see how emotional and social complexities can blur the lines between one’s personal demons, professional goals, and environmental connections. The ending of this phenomenal film certainly requires a closer look. Here’s everything you need to know about ‘Son of Monarchs’ ending. SPOILERS AHEAD.

The film opens with a microscopic view of a chrysalis being cut open. A voice-over explains how a particular legend believes that monarch butterflies are visiting ancestors. In the next scene, we see Mendel, our protagonist, working away in a laboratory. A flashback reveals how Mendel and his elder brother Simon used to visit the butterfly forests around their town.

Soon, we find Mendel going home to Angangueo, Mexico for his grandmother’s funeral. As he enters his hometown, Mendel laments over the increasing pace of deforestation. Later, he attends the funeral at his childhood house. Simon barely acknowledges his presence. Soon after, the brothers have a hostile conversation, forcing Mendel to exit the situation. Outside the house, his niece, Gaby, asks him to attend her wedding in December. Mendel then goes to meet his childhood friend Vincente, who carries out an animalistic mourning ritual for his grandmother. Mendel watches intently but does not participate.

Frequent flashbacks show us that Mendel’s grandmother was a kind and bright presence in his life. She taught him about the wonders of their local environment and praised his strong spirit. Additionally, we see that Mendel and Simon used to be close, even though the latter dominated the former. Back in New York City, we see Mendel determinedly researching butterfly wing pigments, genetics, and optix. Regular flashbacks and Mendel’s frequent nightmares reveal that his parents drowned in a mining flood.

Mendel begins to date an immigration lawyer named Sarah and joins her in her hobby of trying out trapeze swinging. Mendel and his friends frequently discuss environmental degradation, both in a personal and professional capacity. Although he is excelling at his work, Mendel seems disconsolate. Even after his research gets published, Mendel is unable to find joy in his achievements. Mendel decides to get tattoos of monarch butterfly wings across his shoulders and arms.

Mendel distances himself from his friends and Sarah as he struggles with his hybrid identity. His happy memories of his grandmother are frequently juxtaposed with the trauma of his parent’s death and his falling out with his brother. He decides to carry out the animalistic mourning ritual by himself. Later, he takes a vial of ommochrome, the pigment found in monarch butterfly wings, to the tattoo parlor and asks the tattoo artist to use it on his skin. Afterward, we see that he has received Gaby’s wedding invitation in the mail. Mendel reconciles with Sarah and visits the trapeze center again.

Son of Monarchs Ending: Does Mendel Return to Angangueo?

Mendel returns to Angangueo for Gaby’s wedding. He lets Simon know that his children have dreams and “want to fly.” Simon and Mendel have a heated and emotional discussion about their relationship and childhood. Later, we see Simon and Sarah visiting the butterfly forests. The two happily attend the wedding as well.

At night, Mendel participates in the animalistic mourning ritual and fully embraces his hybrid identity. His visit to Angangueo implies that he has begun to heal from his childhood trauma and is able to see the wonders of his hometown that shaped his personality and career. He also reconnects with his relatives, finally allowing himself to feel at home. He comes to terms with his grandmother’s death, his brother’s circumstances, and his scientific and personal all-consuming passion for the monarch butterflies of his childhood.

Do Mendel and Simon Talk About Their Strained Relationship?

When Mendel goes to Angangueo for the wedding, he confronts Simon about his dismissive and hostile behavior. Simon blames him for moving away in search of a good life and for not being around when his family was struggling for employment and even food. Mendel points out that he left carrying all the demons Simon put in his head. He reveals that although he has no memory of his parents’ death, Simon’s frequent recollection of the incident in their childhood traumatized him.

It is then that Simon reveals that he saved Mendel from drowning that fateful night of their parent’s death. Mendel asks Simon why he never told him about it. Simon cites Mendel’s absence as the reason. Although the brothers don’t exactly sort out their relationship, they are now closer to understanding both sides of the story. Their reactions to their shared trauma are vastly different, and perhaps through this conversation they have begun the process of mutual forgiveness.

Do Mendel and Sarah End Up Together?

Mendel and Sarah do end up together. Mendel invites Sarah to Angangueo for Gaby’s wedding. He shows her the butterfly forests and green playgrounds of his childhood. Mendel also tells her about the local myths and legends pertaining to the monarch butterflies. It is clear that since Mendel has finally accepted himself, he is also able to accept Sarah’s love and confide in her as well. As he looks at his culture and family from a new perspective, he excitedly shares the same with Sarah.

Read More: Is Son of Monarchs Based on a True Story?