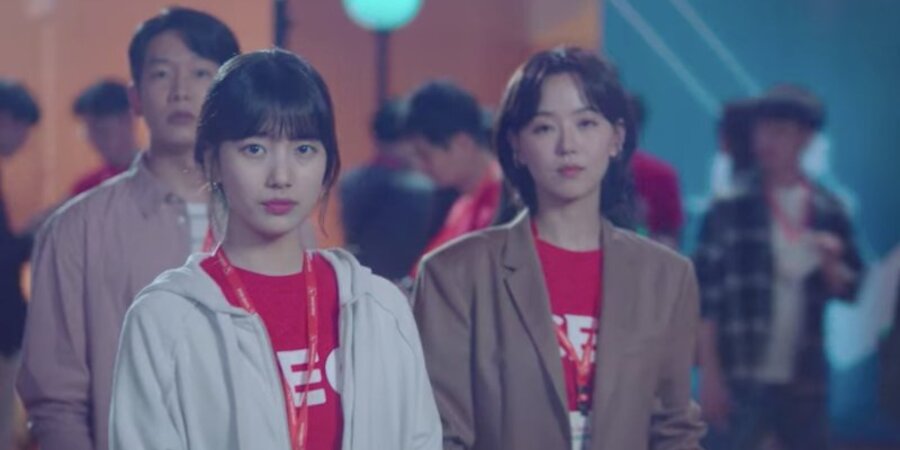 ‘Start-Up,’ Netflix’s newest South Korean drama about ambitious and talented youths fighting to make a name for themselves in the booming tech industry, is reminiscent of previous such dramas – mixing the drive and depth of ‘Itaewon Class’ with the candor of ‘Record of Youth.’ ‘Start-Up’ is set in The Sandbox, the technological heart of Seoul, South Korea, and follows the rise of three individuals who’re competing in a race to the top.

Dal Mi never went to college but has big dreams and yearns to become the next Steve Jobs. In Jae, Dal Mi’s estranged sister, is starting from the beginning, this time without the financial backing of her stepfather, and is focusing on proving her worth. Do San is a math genius but doesn’t take his work seriously. Lately, he is realizing that he needs to also bring forth the dedication that’s required to run a company. The show revolves around the successes and failures of these people, along with an intriguing love triangle involving Dal Mi, Do San, and Dal Mi’s first love.

‘Start-Up’ episode 5 will release on Netflix on October 31, 2020, at 3 am ET/12 pm PT. Each week, two new episodes will drop on the streaming platform on Saturdays and Sundays. The show comprises a total of 16 episodes. For South Korean viewers who live locally, ‘Start-Up’ also airs every Saturday and Sunday on the cable network tvN.

‘Start-Up’ is streaming internationally on Netflix. Subscribers of Netflix can choose to watch either on the app or on the website directly, depending on their preference. Each episode has an approximate run-time of 80-90 minutes. South Korean residents can additionally watch the show as it airs on tvN at 9:00 pm (Korea Standard Time), every Saturday and Sunday. There are SPOILERS AHEAD for the previous episodes. Therefore, if you haven’t watched Episodes 1 through 4, then please head over to Netflix to catch up.

In the little preview shown at the end of Episode 4 of ‘Start-Up,’ things take an interesting turn as Dal Mi and In Jae find out that Do San had been deceiving Dal Mi. Dal Mi may confront Ji Pyeong in the next episode and demand to know the full truth. Dal Mi’s application for the Sandbox also catches the eye of the woman making the selections.

So, Episode 5 should possibly expand on that, but Dal Mi just being a high school graduate might pose a problem. In the last episode, a mysterious man arrives at the airport during the last scene. The next episode is likely to answer the question regarding this man’s identity and his role in the life of Dal Mi and In Jae.

As Dal Mi, In Jae, and Do San reach the starting line of The Sandbox competition, they realize they’re all at the same level, despite having varying past experiences. In Jae left her big job in a big company to prove her mettle on her own, just as Dal Mi quit her menial part-time job to follow her dreams as well. The two sisters stand at the same starting point even though one went to college and one didn’t. Who is going to fare how? Only time will tell.

Meanwhile, Do San, while dealing with prospective investors, realizes that he is way out of his depth, and even though he is a math genius and can code like a pro, he knows nothing about effectively running a company. This realization is further cemented when Ji Pyeong tells Do San that he needs to hire a CEO to run his company because clearly, he doesn’t have what it takes.

Hearing this, Do San is still hurt, even though he acknowledges it to be true. All three of them – Dal Mi, Do San, and In Jae – clear the first screening for The SandBox, and the episode sees the sisters pitted against each other in the ultimate face-off. Do San asks Dal Mi to be his company’s CEO.