Who is Sun on The Masked Singer? 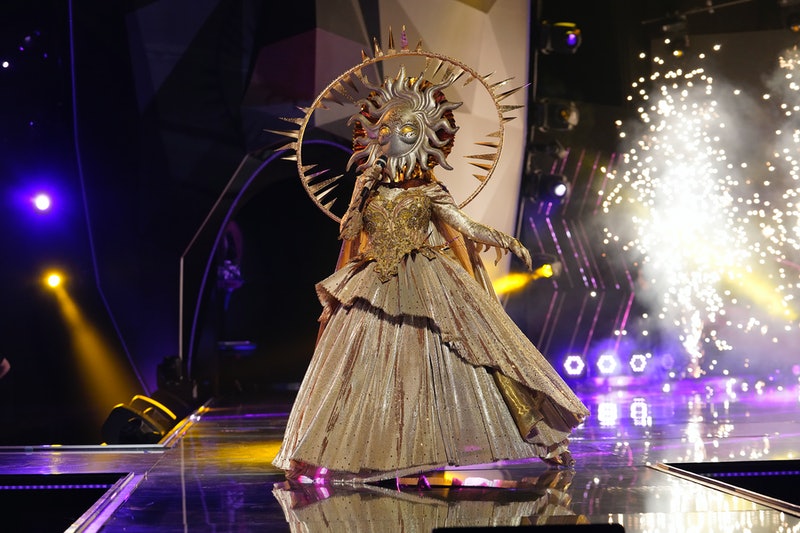 ‘The Masked Singer’ is a completely different kind of singing competition. It features celebrities who hide their identities with an extravagant costume as they fight it out on the stage to win the Golden Mask trophy. The truth is only revealed when the contestant gets eliminated. But the show does give clues throughout the series and lets you come to your own conclusions till the unveiling. So, let’s dissect the first clue that’s given about Sun!

Shining brightly even before the contest has started, Sun states that she is going to “eclipse the competition.” Also, she says that it will be challenging for others to rain on her parade. The golden outfit that she wears on the show was actually made from 100 feet of sewn fabric, and the clay face mask took three weeks to produce. More than 200 rhinestones were used to make the dress, and the look also incorporates sunburst jewels. There is a special secret behind the costume, but this has not been disclosed yet. The major hint states: “This sun knows how to shine like a torch, even during the freezing winter.” Check out the introduction video! (Sun’s intro starts at 11:47).

Two popular renditions of the song ‘Don’t Rain On My Parade’ are by singers Barbara Streisand and Lea Michele. The latter rose to fame on the TV show ‘Glee.’ Both of them are quite established in the industry, and they also possess an innate talent when it comes to performing on the stage. However, we felt that the song was referenced just to divert everyone’s attention. So, we shifted our focus onto the other clues.

After researching for quite some time, it seems as though the popular opinion is that the costume is filled out by Linsey Vonn. She is an alpine ski racer who has won four World Cup championships. At the 2010 Winter Olympics, she also won a gold medal. Therefore, the possibility of Linsey being behind the mask did seem likely. However, we were not too convinced, although this made us research more about the Winter Olympics, which is how we reached a conclusion.

LeAnn Rimes, in our opinion, actually fits the profile. She is a singer by profession, and she rose to fame for her version of the Bill Mack song ‘Blue,’ when she was just 13. LeAnn also set a record by becoming the youngest country music star since Tanya Tucker. Although she has won many accolades, the two Grammy wins seemed paramount when we were building our case. Her debut album Blue was certified to be multi-platinum by the Recording Industry Association of America. However, what really convinced us of this possibility was that LeAnn sang ‘Light the Fire Within’ for the Winter Olympics in 2002.

The event was held in Salt Lake City, Utah, and in an Instagram post, she stated how thankful she was for the opportunity. The caption read, “It was an incredibly inspiring experience and these kids were all my heroes! It was SO COLD and we were all performing on ice!! They were all such troopers. This performance will forever be one of the most incredible experiences I’ve ever had as an artist. I still cry watching it.” If this doesn’t corroborate with the hint, then there are few things that likely will.