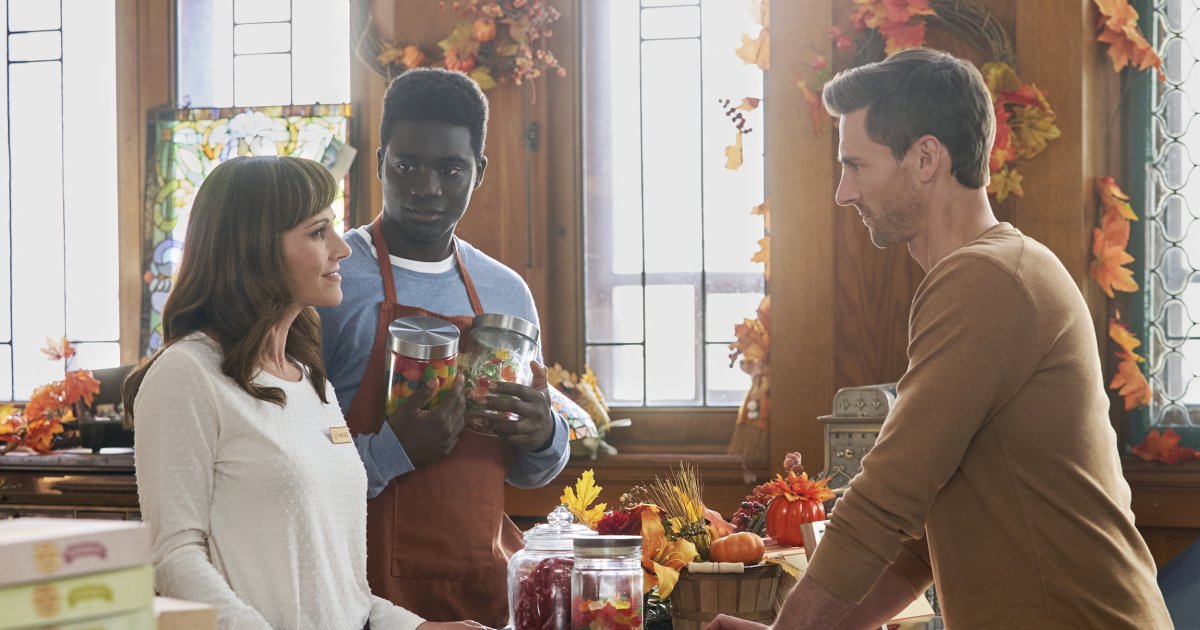 ‘Sweet Autumn’ is a romantic film about the surprising way fate brings together Maggie (Nikki DeLoach), a successful entrepreneur, and Dex (Andrew Walker), a maple farmer. Maggie returns home for the reading of Aunt Dee’s (Henriette Ivanans) will. Her aunt leaves her half of the maple candy shop and the other half to Dex. Both of them need to figure out a way to work together despite their differences, as the town gears up for the Sweet Autumn Fest.

Maggie and Dex were extremely close to Aunt Dee as she filled a very significant void in each of their lives. As they go through the letters Aunt Dee left them, they try to honor her wishes and understand the purpose of being brought together. Directed by Gary Yates, the film is part of Hallmark’s annual ‘Fall Harvest’ programming event. Let’s get straight into discussing the cast and filming details of the film!

The story is based around the maple candy store, which once belonged to Aunt Dee and is now the shared property of Maggie and Dex. This is set against the backdrop of the town’s Sweet Autumn Festival. Let us take a look at where ‘Sweet Autumn’ was filmed!

Nikki DeLoach was in Vancouver shooting for ‘Cranberry Christmas’ when she was contacted by Hallmark to film ‘Sweet Autumn’ in Winnipeg, Manitoba. She had traveled to Vancouver by road with her whole family to keep in mind the safety factor during the pandemic, so she had two days to reach Winnipeg before this film would go into production.

DeLoach has worked with Cartel Pictures in many films before this and was very comfortable with the idea of working with them again, even during the pandemic. She had to be very careful as her three-year-old son has a heart condition. The production company maintained high standards of safety to protect the cast and crew. It was a challenge to shoot at this time since only ten extras were allowed on set. Gary Yates was appreciated for managing filming with very few people, especially regarding the scenes depicting the town festival.

Andrew Walker joined the cast at the last minute; he finished his quarantine only a day before they started filming because of which the actors did not get as much time to prepare their scenes as they normally would have. Karen Tusa did the location scouting for the film. She shared a clipping of the local news on her Instagram account, which features Main Street in Stonewall, Manitoba, as the sight for the town festivities in ‘Sweet Autumn.’

‘Sweet Autumn’ marks the third movie featuring good friends Nikki DeLoach and Andrew Walker as the lead. In fact, it was DeLoach who suggested Andrew Walker for the character of Dex, since the makers had not yet settled upon an actor. You may recognize Nikki DeLoach from ‘The All-New Mickey Mouse Club,’ ‘Grey’s Anatomy,’ ‘Windfall,’ and ‘Days of Our Lives.’ She has worked in eight other Hallmark movies before this romantic film.

Andrew Walker is a Canadian actor who plays Dex in the film, and he, too, has been featured in eight Hallmark movies apart from this. He is also known for his roles in ‘Steel Toes,’ ‘The Gundown,’ and ‘Against the Wall.’ Henriette Ivanans plays Aunt Dee. Her notable credits include ‘Star Trek: Voyager,’ ‘Smother,’ and ‘Liberty Street.’