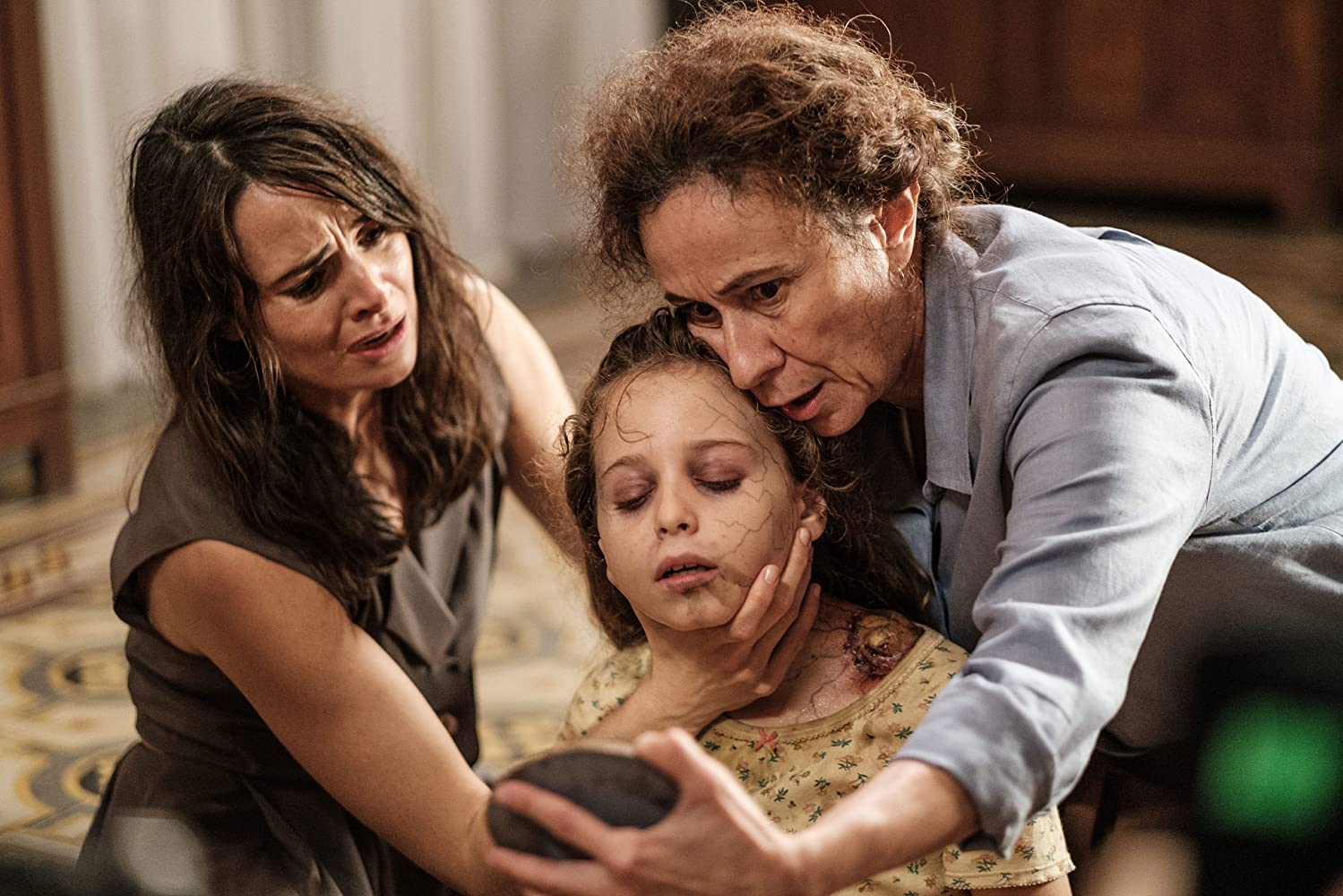 Set against the backdrop of Southern Italy and directed by Domenico Emanuele de Feudis, The Binding is paced in a manner that gives the viewers a chance to observe all the subtleties of each scene. The film takes you through many chilling scenes that give you goosebumps; a perfect run-up to Halloween. As you go through the film, there are a lot of connections that are made in retrospect, which make us question our judgments about the characters.

The film begins with a woman undergoing a painful ritual to ward off evil. The film also establishes the concept of binding for the viewers, as that is what carries the story forward. Binding is a process of linking a victim to the perpetrator or malevolent forces which makes a person lose their ability to make decisions and be guided by the forces that possess them. Francesco (Riccardo Scarmarcio) is driving his fiancé Emma (Mia Maestro) and Emma’s daughter, Sofia (Giulia Patrignani) to meet his mother, Teresa (Mariella Lo Sardo) for the very first time. They are going to share the news of their engagement with Teresa.

However, small instances make Emma believe that something is amiss. Her anxiety peaks when her daughter Sofia starts to experience inexplicable things. As Sofia’s state worsens, she is convinced that taking her back to the city is the best course of action. Emma gets desperate to run away from the house despite the warning from Teresa, Francesco, and their help, Sabrina. Emma holds them responsible for whatever is happening to Sofia. She couldn’t be more wrong as she soon realizes who the real threat is.

Ada (Federica Rosellini) was engaged to be married to Francesco but things got messy when he took a drastic step that ultimately brought a curse to him and his loved ones. Teresa tells Emma the truth about Francesco’s story that Ada did not lose her child due to an illness but because of his doing. He was too young to be a father and did not want the child that Ada was expecting. When Ada refused to terminate the pregnancy, Francesco made the worst decision of his life. He resorted to dark magic in secrecy to get rid of the unborn child but wasn’t skilled enough to handle the evil forces; Ada suffered painfully because of this and ultimately ran away.

Being a healer, Teresa was trying to help Ada just like she was trying for Sofia. The story follows the female characters and their sacrifices and struggles to keep Sofia safe from Ada. It seemed like the end of their troubles except for Francesco, who was presumed dead.

How Significant is Envy?

In some cultures, it is believed that those who have cause to feel envy gave people an “evil eye.” Towards the beginning of the film as Teresa and Emma watch Francesco play the piano with Sofia, Emma made a light remark about being envious of them seeing how close they were. To this, Teresa had replied saying, “Don’t be jealous of them. The bond with a mother is unbreakable.” These words ring through our ears throughout the film.

After what Francesco had done to Ada, it was her unfulfilled desire to have a family with him. Ada had her eyes on Sofia because Francesco looked upon her as his daughter. When we are made to believe that Francesco is dead, the end of the film sees him open his eyes in the cave as Sofia experiences discomfort again. Could this mean that Teresa resented Emma and Sofia’s presence because of whom she lost her son? It was their presence that had reawakened Ada.

The Precious Blood that Gives Us Life

When Teresa’s friends join them for lunch, they pray at the table using the words, “The precious blood that gives us life.” What could they be referring to? Blood and ties of blood are central to bonds and it holds for The Binding. The process of binding Sofia to Ada starts with her getting bitten by a tarantula. Teresa is seen helping her break the bind by making an incision and letting her bleed through the wound.

When Ada is feeding her blood to Sofia in the cave, it is almost symbolic of a mother nursing her child. Her bond with Sofia makes her more powerful and dangerous. But this also connects Sofia to Ada, which makes her experience all that Ada experiences, including struggling to stay alive. Ada can influence people around her and makes them do things they wouldn’t have on their own. She makes Emma stab herself and chokes Teresa by gagging her own throat; these instances make this evident.

Towards the end, when Emma and Sofia are lying on the ground lifeless, we see Emma’s blood flowing towards Sofia, bringing them both to life again. This could signify the reunification of Sofia’s bond with her mother since a “mother’s bond is unbreakable.”

Probably the most significant influence that Ada has could be over Francesco. She draws blood from him in a moment of passion. And a few minutes later we see her attacking him after he tried to strangle her to death. The screen blacks out after this, making us assume they are now bound together. This is important because Francesco “awakens” at the end of the film.

The transformation of the characters’ eyes may answer a lot of questions in the viewers’ minds. The presence of malevolent forces in a person becomes evident through their eyes which blank out to a complete grey. Ada has the grey “evil” eyes for most of the film, then Sofia when she is under her influence, Francesco after he is bitten, and Emma when she stabs herself. Ada’s eyes seem to return to normal after Emma stabs her in the end but only Sofia takes notice. This is followed by Francesco waking up in the cave- could this mean that the malevolent forces haven’t been rid of but just changed bodies?

To complete the ritual to ward off the curse, the victim is made to look at themselves in the mirror but the glass cracks. This could mean that Teresa’s efforts have not come to fruition. The eyes remain grey. It is interesting to note that Teresa had complimented Sofia’s eyes when they first met. Sofia’s eyes track Ada’s movements even when we do not see anyone in the room. When Emma was sent cloaked through a spell to locate Sofia and Francesco, she encounters Ada face to face. At first, Ada only senses her presence but ultimately their eyes meet, which puts Emma at risk.

To protect Sofia from the evil eye, Teresa had given her a small cloth bag with stones, threads, and small objects. This goes back to an ancient custom where mothers gave these objects that they believed to have apotropaic qualities to protect their children.

Trees: A symbol of life

Since the evil eye is said to be associated with fertility; it comes across very clearly in the narration. The story’s whole premise is that Ada wanted Sofia as her own because she couldn’t have the child she wanted. Dried up branches are used in many instances in the film to depict the failure to nourish life.

When Francesco looks under Sofia’s bed, he finds many dried twigs tied together. Even Sofia is seen yanking a strand of hair from her head to tie around the twigs, strengthening her link to Ada. The massive olive trees usually signify peace but the uprooted trees amongst which Sofia finds herself when she follows Tito the dog is a foreboding of disruption of peace.

Much like the branches of a tree and their connections, the pattern is followed in the human body’s blood vessels. When Sofia is bound to Ada, the veins on her skin become prominent, and we can see the venom from the spider bite also spreading. It can also be a metaphor for the network of binds that Ada creates as she drew life force from Sofia and then possibly even Francesco. Ultimately, Ada was cursed because of a mistake Francesco made and it seems to be affecting all those who have been connected to him.

Read More: Is The Binding Based on a True Story?