The Dark and the Wicked Ending, Explained 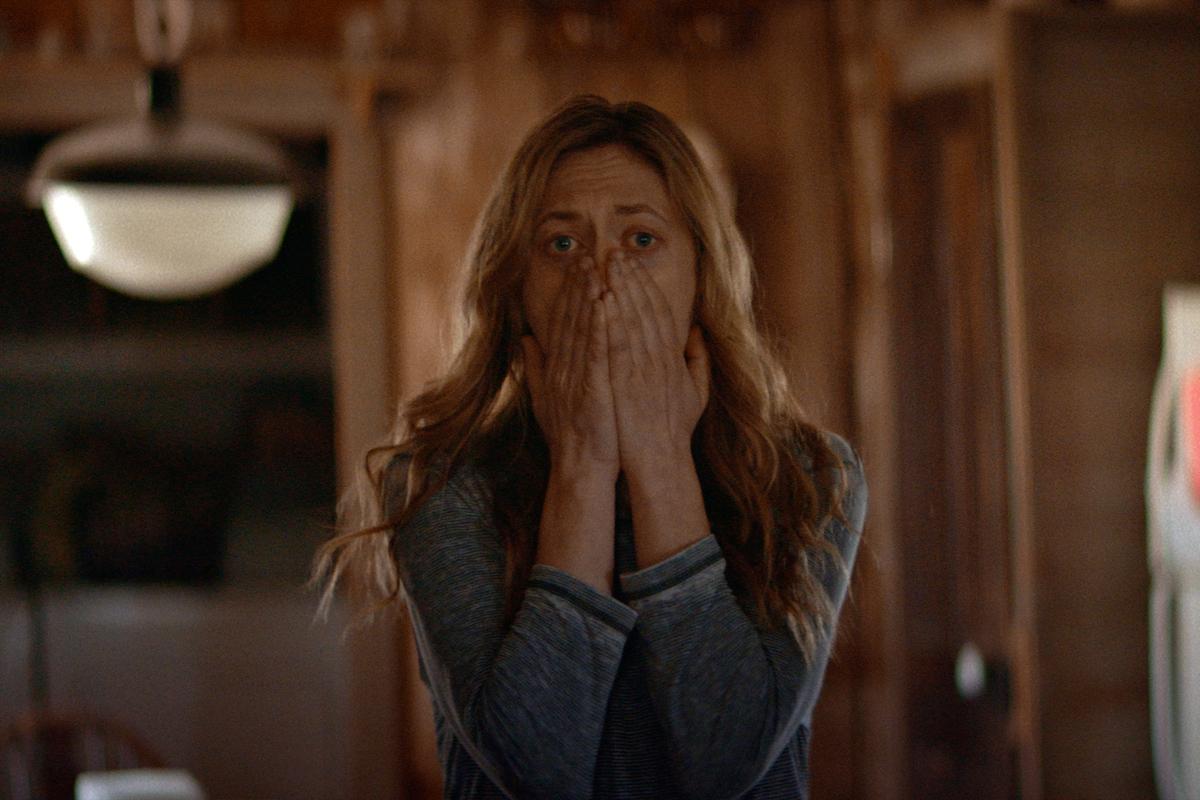 The most disturbing aspect of ‘The Dark and the Wicked’, Bryan Bertino’s (‘The Strangers’, ‘The Monster’) fourth cinematic venture, is not the literal evil that seems to crowd the last two-thirds of the movie, but the prevalent, oppressive atmosphere that he painstakingly creates with the help of his craft, creative team and a cast packed with highly talented actors.

Cinematographer Tristan Nyby, editors William Boodell and Zachary Weintraub, composer Tom Schraeder, and his two main stars Marin Ireland and Michael Abbott Jr., create a sinister atmosphere in the film. While there is an adequate number of jumpscares and other types of classic horror tropes in the film, it is essentially a nihilistic exploration of the human condition and deeply-rooted guilt. SPOILERS AHEAD!

The Dark and the Wicked Plot Synopsis

The story is primarily set on an expansive and mostly-empty farm. The family patriarch (Michael Zagst) is on his deathbed, which has brought back his two children, Louise (Ireland) and Michael (Abbott Jr.). Their mother (Julie Oliver-Touchstone), who has been taking care of her husband for this long, told them not to come. It’s not just the understandable disappointment that leads her to be dismissive of her children’s presence in their childhood home, but also the abject fear for their wellbeing. She genuinely believes that there is an evil force lurking within the house.

In the first part of the film, Bertino takes his time to build a dark and claustrophobic setting. Louise and Michael’s guilt of leaving their mother to look after their father on her own become evident in their respective sense of shame. But then, almost inevitably, their mother dies, after chopping off her fingers and hanging herself, and they are left to fend for themselves. The two of them, alone in that large acreage, surrounded only by bleating goats and moaning winds, they inherit their mother’s curse and start seeing things.

The Dark and the Wicked Ending 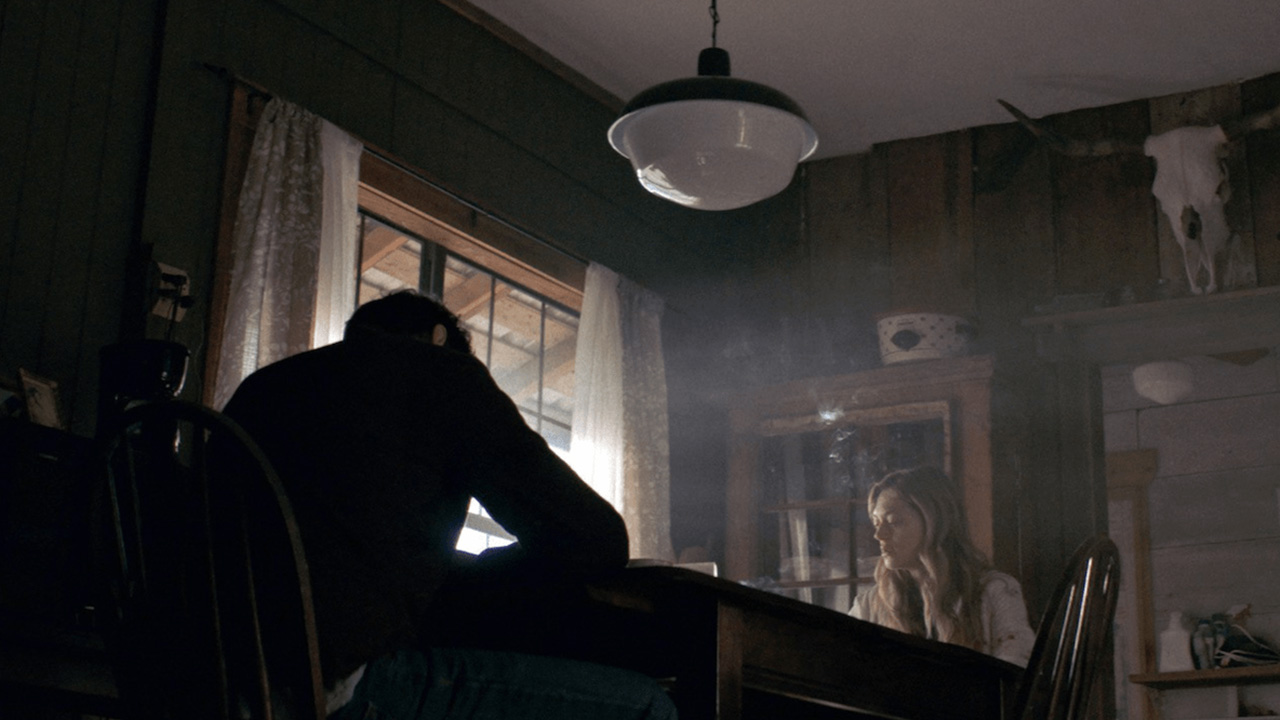 The siblings start having visions almost simultaneously, and as the film progresses, they become wilder and more fatalistic. They try to explain what they see through reasons, a venture that ends in a miserable failure. Michael tries to assert that they are a non-religious family multiple times but can’t explain why his mother was keeping those Sunday school crosses on her. The Priest (Xander Berkeley), who shows up at their home one day, claims that their parents were alone, insinuating that they felt deserted, and adding that he was there to help them when their own children weren’t.

Ultimately, it proves too much for Michael, and he decides to go back to his own family. When he tells Louise this, she becomes inconsolable, being betrayed by her only remaining family. But if Michael thought that he would escape the curse just by leaving the farm, he was grossly mistaken. Previously, after an especially disturbing vision of his mother, he came quite close to kill himself. When he reaches his home and sees his family dead, he is finally overwhelmed. He slits his own throat before realizing that this is yet another vision.

But by then, it is already too late. His family later finds him. After Michael left, Louise doesn’t even now have the choice to leave. She is broken, shell-shocked, and teetering on the brink of insanity. A mysterious young girl (Ella Ballentine) shows up on her doorstep, claiming to be the farmhand Charlie’s (Tom Nowicki) granddaughter and informs her that Charlie has died. As she deals with yet another loss in her life, it morphs into yet another nightmare.

Even the God-fearing nurse (Lynn Andrews) succumbs to the evil force. She attacks Louise, who passes out, before killing herself with knitting pins. When Louise wakes up, she tries to leave but is pulled right back into the house by her father’s coughing. When the last breath leaves her father’s body, she becomes truly alone and easy prey for the so-called Devil in her home.

Are the Visions Real? 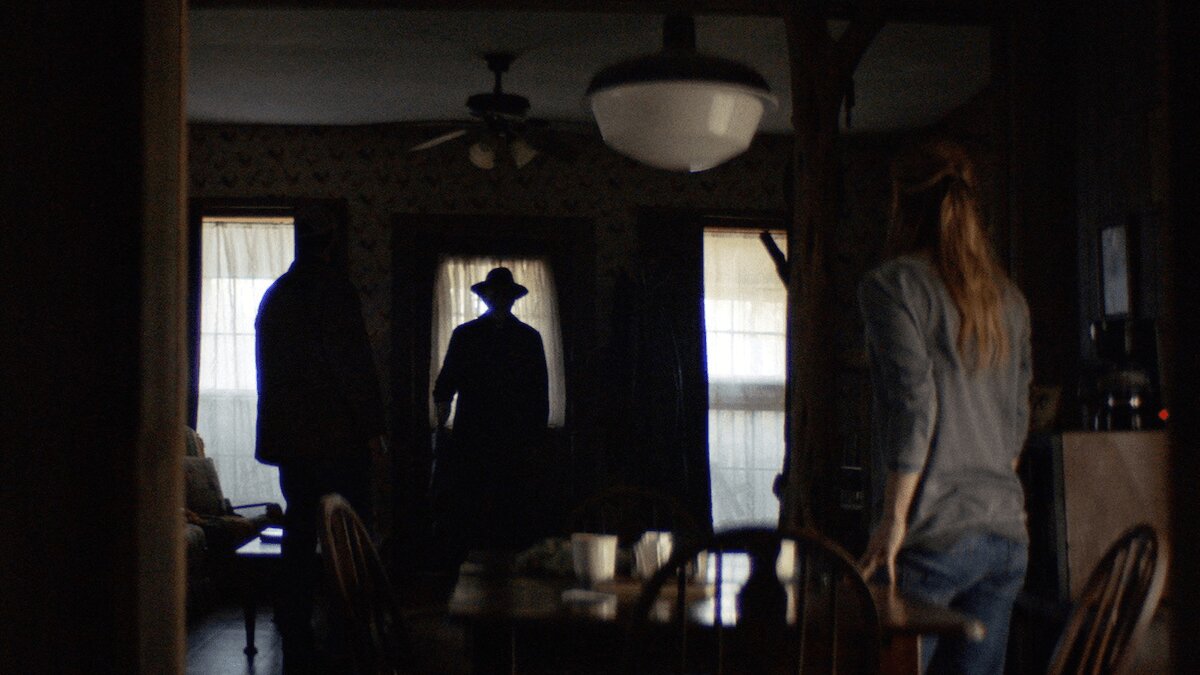 The nature of evil in ‘The Dark and the Wicked’ is complex and defies most explanation. If it were indeed a literal Devil, then the psychological aspect in the film would not have become that prominent of a factor. We must remember here, that four out of the five deaths that happen in the film are suicides. The remaining one is of natural causes. Unlike in ‘His House’ for instance, no supernatural entity or curse is in play here, at least not in the classic sense.

On the other hand, if it were purely psychological, then its effect would be much more exclusive and limited. That would have made this a completely different film. ‘In the Dark and the Wicked’, the evil is a tangible human conscience that has manifested itself. For the Mother, it’s the sheer trauma and hardship of looking after a bedridden man. For Louise and Michael, it’s their sense of guilt and shame.

For Charlie, it’s perhaps his unspoken feelings for a much-younger Louise. For the nurse, it’s the shortcoming of her faith. The Priest is the manifestation of the evil that the mother thinks has taken root in their home. Despite its malevolent nature, its very presence assures her that she is not alone in the home with a sick husband. The brother-sister duo also sees the Priest likely because of the diary.

As Louise and Michael learn more and more about the emotions and desires their mother suppressed for so long, her pain and suffering in those years become very real for them. As the Priest tells the siblings, “What does it matter whether you believe? You think a wolf cares if you believe it’s a wolf, not if it finds you alone in the woods.” The Mother falls victim to her own psyche, and her children eventually follow suit.