The Devil is a Part-Timer Season 2 Episode 11 Recap and Ending, Explained 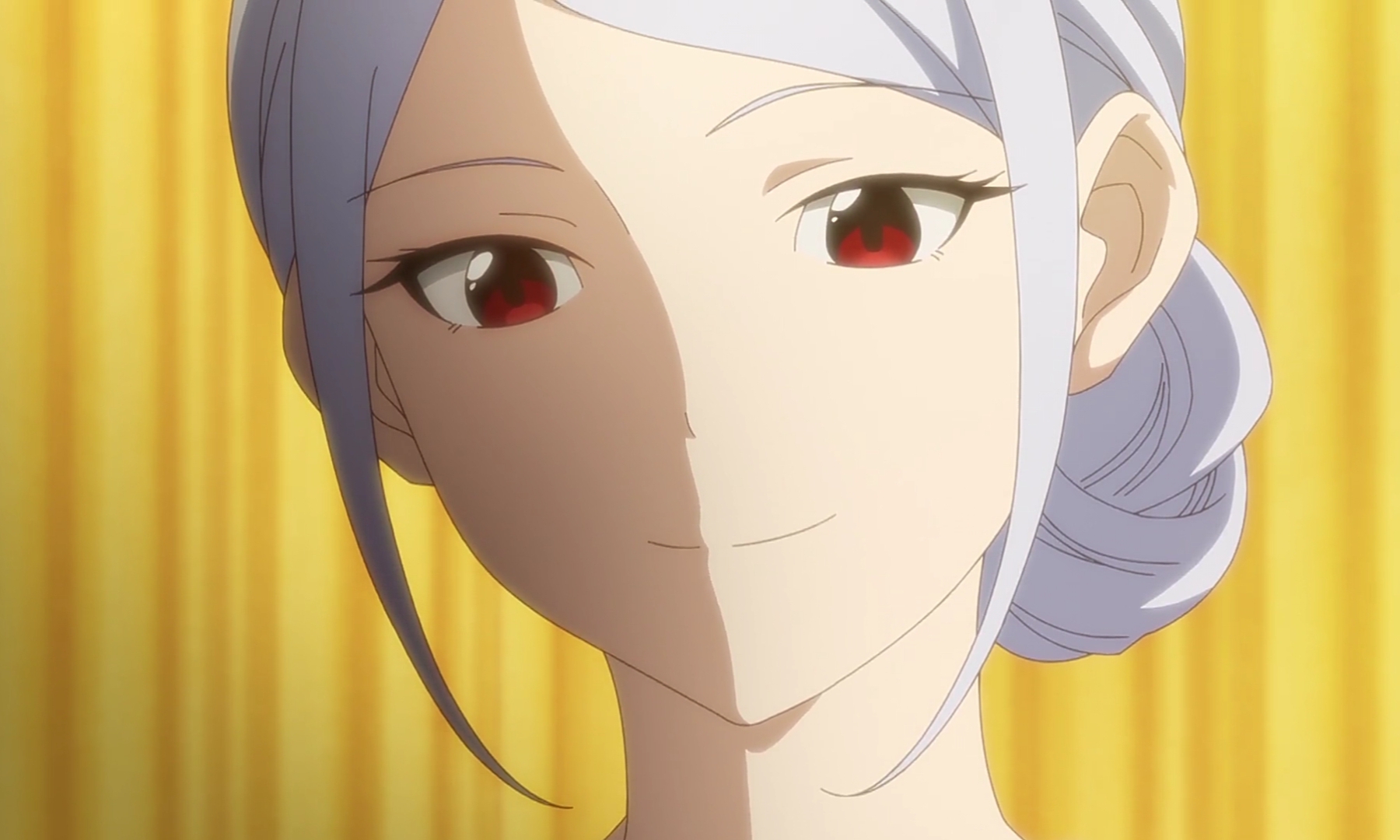 The Devil is a Part-Timer Season 2 Episode 11 Recap

After planning everything, Rika is happy that the day has finally come to get to meet Alsiel. Therefore, she leaves no stone unturned to look presentable just for him. Unfortunately, when they finally meet she is disappointed that Alsiel came with Suzune and Maou and bemoans the fact that she did not expect that it would happen.

But before they go shopping for TVs, the four friends stop at a popular restaurant that serves affordable but great quality food. All of them order Kake udon and eat together. Suzune is particularly impressed by the food there and argues that there is literally nothing to complain about. When Maou is discussing his budget with Rika, a rude customer draws everyone’s attention.

Maou does not want to sit back and let him talk rudely to the girl at the counter, so he intervenes and gives him a lecture on manners. To his surprise, the customer turns quite friendly afterward. Later outside the shop, he talks to a friend on the phone about some unknown plan. Meanwhile, Maou and others head to the showroom to find the right TV for themselves.

As Alsiel is looking at the TVs there with Suzune, Maou asks Rika if she has fallen in love with his friend. Rika is so embarrassed that she can barely say anything. Maou later discusses the same with Suzune who gets quite mad. She argues that they cannot afford to get more humans involved in their life. 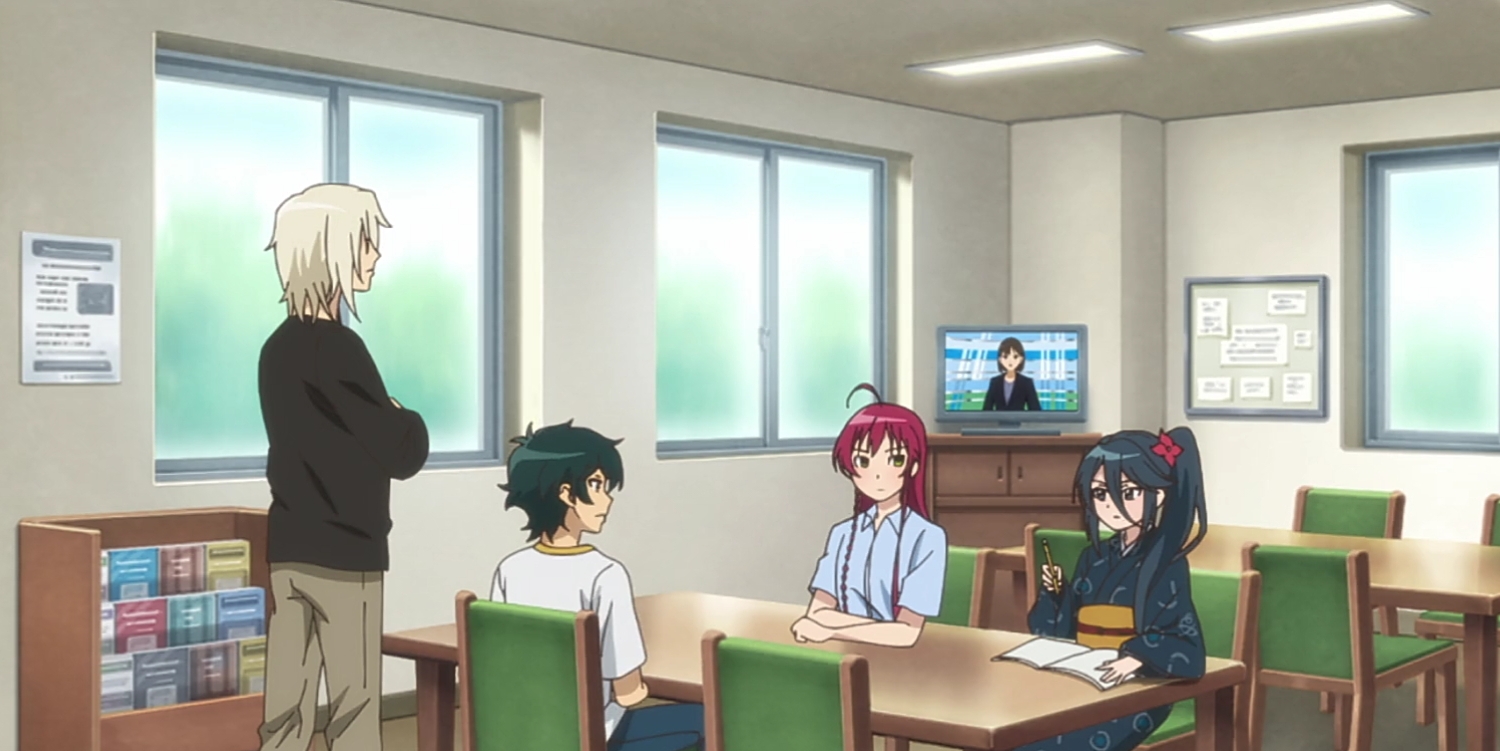 They have already told Chiho everything about them and getting Rika involved can be a bit dangerous in the long run. However, Maou disagrees with her. Meanwhile, Emi accidentally meets Chiho’s mother and learns that her friend has been admitted to the hospital.

The Devil is a Part-Timer Season 2 Episode 11 Ending: How Does Chiho Get Poisoned By Magical Powers? Who is Raguel?

As the news of Chiho’s condition finally reached everyone, Maou and his friends immediately flock to the hospital where he is admitted. Before they see her, Emi tells them that Chiho has been poisoned by extremely high magical powers. They visit Chiho’s room soon afterward and are extremely worried to see her lying unconscious. When Chiho’s mother is not around, all of them gather around and discuss the situation at hand.

Suzune reveals that she used holy water to see how Chiho’s body will react and guarantees that it will eventually cause the neutralization of the magic, meaning she will be okay. However, Maou and others are still unsure how she got poisoned in the first place and got the ability to use magical powers. Suzune argues that she is most likely struck by the holy spirit sonar, which has turned her life energy into magical powers.

While they are having this discussion the TV screens blast once more and all of them rush to be on Chiho’s side to keep her safe. Urushihara finally arrives at the hospital too and reveals that the sonar was actually released by the Watcher through TV signals. He further explains that Gabriel came to their house in their absence and it turns out that he is no longer looking for yesod fragments but is now responsible for looking for the Legacy of the Great Overlord Satan.

Urushihara argues that the Watcher is actually Gabriel’s replacement. When Suzune enquires if he is Raguel the Watcher responsible for monitoring all the activities of the angels- Urushihara responds in the affirmative. However, he does clarify that Raguel is not a special-ranked angel but instead is entrusted with a critical authority called Declaration of the Fallen. It means that he not only monitors other angels but also decides what punishment is given to them.

Although the sonar was released all over the city, it affected Chiho the most because her house was already a site of sonar blast before. When Alsiel questions the possible motivations behind Raguel’s actions, Emi argues that he is not looking for the Overlord, Yesod fragments, or better half for that matter. In fact, she believes that he is actually after her mother Laillah.

Unfortunately, before they could discuss anything further, Chiho’s mother returns to the hospital to see her again. Later Maou and his friends decide to regroup and find Raguel before he does anything else. Meanwhile, when Chiho is alone, Lailah pays her a visit and gives her a ring. She believes that Chiho is the one that binds Maou’s group together so her well-being is very crucial. In all this drama, Maou and his friends actually did not realize that the man they met at the restaurant earlier that day was actually the Watcher himself.

Read More: The Devil is a Part-Timer Season 2 Episode 10 Recap and Ending, Explained