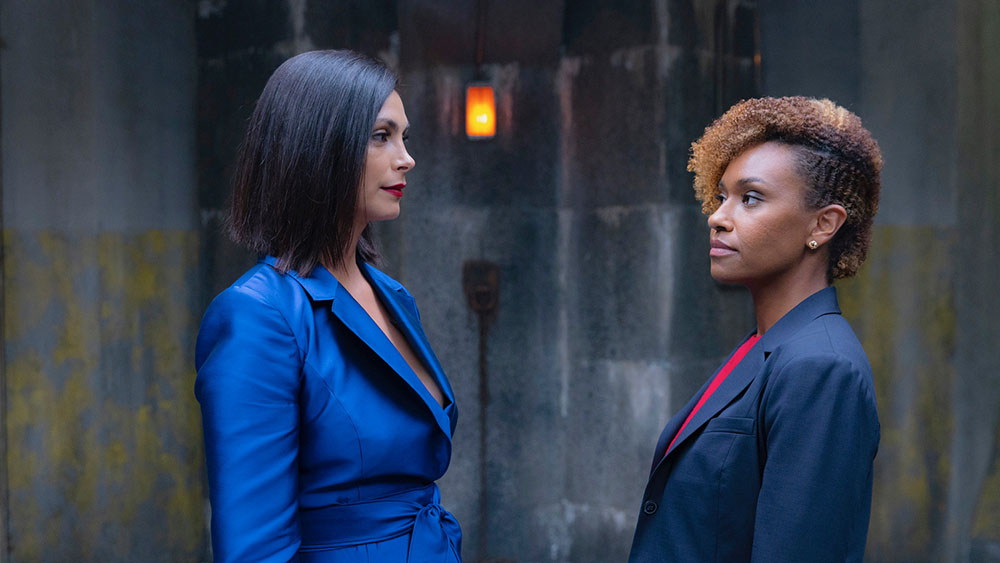 Created by Jake Coburn and Nicholas Wootton, ‘The Endgame’ is a spy drama TV series on NBC. It follows disgraced federal agent Valerie AKA Val Turner as she races against time to stop international arms dealer Elena Federova who has orchestrated seven bank heists across New York. Both women share a past connection, and Val must decode Elena’s mind games and motives before she can cause further destruction.

However, along the way, Val realizes that what the criminal mastermind desires is not power but vengeance against a former injustice. Val and Elena are opposite sides of the law, but their fates are entangled for a much bigger cause. The series explores the extremities a person can commit to protect their loved ones and seek the truth. Here’s everything that transpires in the premiere episode of ‘The Endgame,’ along with the significance of the shocking ending. SPOILERS AHEAD.

Episode 1 of ‘The Endgame’ opens with international arms dealer Elena Federova being brought to an FBI facility in Queens, New York. When Homeland Security and officers try to interrogate her for the names of her contacts, she refuses to divulge any information and rather smugly indicates that her detention will have consequences. Meanwhile, a group of masked assailants suddenly break into a major bank in New York and take hostages, and Elena declares that it has been orchestrated by her.

The heist causes an uproar amongst top security officials and Elena further divulges that there is more to come if they don’t release her. Elsewhere, federal agent Val Turner meets her imprisoned husband Owen, who is facing a 10-year sentence for accepting drug money from a criminal organization. Being honest to her job, she had turned him in a year ago after discovering his involvement and is presently trying hard to get him released. However, Owen asks her for a divorce to keep her away from his troubles.

Val refuses Owen and arrives at the site of the first heist, where she is snubbed by a superior and sent away. After getting her husband arrested, she has lost the respect of her colleagues and struggles to prove her mettle. However, when a second bank gets attacked, Val uses her instincts to contact Solomon Santillana, a former cartel boss who has numerous assets in the very bank. Solomon speaks to her from the bank and denies his involvement but hints at Elena.

An alarmed Val tries telling her senior about Elena’s group of mercenaries named “Snow White” being behind the heists, but he dismisses her. A third bank heist causes him to take her seriously and he sends her to interrogate Elena directly. Val divulges to Attorney General Doblin that she and Elena had crossed paths in the Gambia five years ago. She also talks about Elena’s deceased husband Sergei and the possibility of her having deliberately gotten captured by the FBI.

Elena recognizes Val and states that she knows about her impending divorce. Moreover, Owen’s divorce lawyer turns out to be the partner of Elena’s attorney. He tries to blackmail Val into helping her in return for proof of Owen’s innocence. Val refuses and tries to warn Doblin and asks for SWAT intervention but he mocks her. Three more bank heists happen despite high-security measures and the FBI concludes that Elena might target the Federal Bank next.

Val reaches the bank but witnesses a board member being taken hostage by Necati Acar, whom the FBI thought to be their mole. Suddenly, Elena’s mercenaries arrive and pretend to be a SWAT team, thus fooling Val and entering the bank. After seven consecutive bank heists, the FBI realizes that Elena has a much bigger plan behind all this and rushes to decipher her next step. To add to everyone’s worries, she specifically targets Val, who now must try to outwit her in her own game.

Val tells Doblin that Elena’s husband Sergei died eighteen months ago after apparently being poisoned by her. Elena refuses these allegations and fondly states that she truly loved him and has a hidden child with him. Val further reveals that Elena had negotiated to retrieve Sergei’s corpse from Crimea in return for six cruise missiles. Eventually, Elena hints that the motives behind her plan might not be money or power, but love and the truth.

As the episode ends, Sergei is disclosed to be alive and in the same prison as Owen. He anticipates Elena’s arrival and Owen also seems to be aware of their plans. Thus, Elena’s motives are most likely fuelled by her love for Sergei and desire for vengeance against a previous injustice against them.

When Did Elena and Val Meet?

Val has an elaborate research file on Elena which helps her prove her credibility to Doblin. Upon being questioned how she knows so much, Val explains that she had gone to the Gambia to investigate a coup five years ago. A warlord named Galeo was terrorizing a fishermen’s village but suddenly Elena and five mercenaries arrived and liberated the village quickly by poisoning him with heroin-laced cigarettes.

The mercenaries further blew up Galeo’s diamond mine but refused to take any of the extracted treasure. Elena then tried to shoot Val but she narrowly escaped and returned to New York. In the present time, Elena reveals that she purposely aimed at Val to generate her curiosity and make her look for her. However, Val is befuddled as to why she and the Snow White did not take any of the million-worthy diamonds from Galeo’s mine. This leads her to comprehend that Elena’s goal behind the bank heists is not money, but something much more sinister.

What is the Story Elena Tells Val?

Elena narrates a fairytale to Val about a young girl who dearly loves her father but a tragic incident causes his death and changes her life forever. It is revealed to be a true story that occurred six months after the dissolution of the Soviet Union. In that, a girl and her father shoot a missile at a car but realize that one of the two passengers has escaped. Upon searching, they find the young girl hiding in the woods, and the other girl stabs her in the abdomen.

Initially, Val thinks that the father and daughter in the story were Elena and her father. However, Val gets shocked when Elena discloses that the girl who got stabbed was her and her father died after their car burst into flames from the missile. Despite the attack, Elena managed to outpower and kill them. She eventually recovered from her wound, but still carries the scar on her stomach which she shows Val.

With this incident that she calls a “fairytale gone wrong,” Elena starts playing with Val’s mind and drops mysterious clues about the real reason behind her plans. In addition, she indicates her penchant for fairytales as her group of mercenaries is also named Snow White.