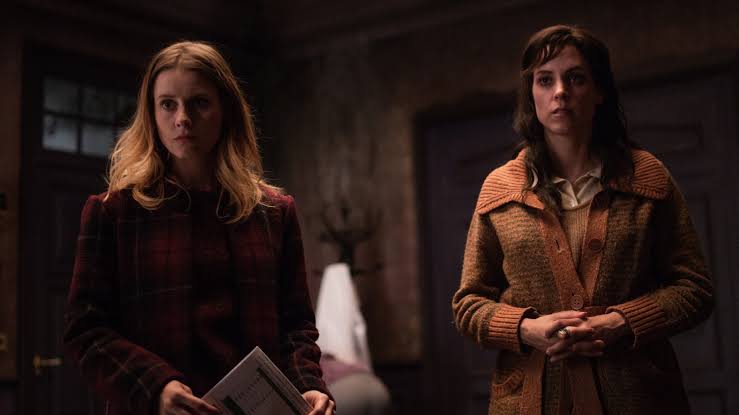 With Halloween right around the corner, Netflix is leaving no stone unturned to offer audiences plenty of choices. ‘The Influence‘ or ‘La Influencia’, as it is known in Spanish, happens to be one of them. Audiences have come to expect an air of creepiness and spookiness from foreign horror movies, and the film proceeds to establish that right from the start. However, when it comes to actual horror itself, the movie seems to struggle over the 99 minutes of its runtime.

The film follows Alicia, a nurse who moves to her childhood home in order to care for her dying mother. She is accompanied by her husband Mikel and her young daughter, Nora. While at the house, she reconnects with her younger sister Sara. Soon the darkness of the sisters’ childhood, that they had buried, seems to burst forth to the surface, and the dying mother is more than what she seems. Although this darkness affects each and everyone, as the title suggests, it influences Nora the most, who grows disturbingly close to her grandmother.

‘The Influence’, unlike most horror movies, does not take a lot of time to establish the supernatural elements. Right from the start, we know that the dying mother is a witch and the family members appear to be aware of that. While her behavior is disturbing, as shown in the recollections of the sisters, we realize that she is playing a bigger game when she begins to connect with her granddaughter, Nora, despite being in a coma. While the supernatural aspect itself is immediately evident, its manifestation does not come quickly. In fact, a large section of the movie is a slow burn where we see the grandmother’s increasing influence on Nora that affects her behavior and causes her to act out.

One of the most striking instances of memorable violence would be when Nora stabs her classmate with a compass and proceeds to throw punches at her face when she hears the classmate foul mouthing her grandmother. It would be important to note here that for a horror movie, ‘The Influence’ does not shy away from violence. A lot of the horror is perpetrated through acts of extreme violence involving plenty of bloodshed. Apart from Nora’s obviously chilling act, there is a scene where her grandmother manages to manipulate a young boy into smashing her aunt’s face in with a spade. Even in one of the final confrontations of the movie, there is a lot of bloodshed as Mikel and Alicia violently confront the comatose old lady in order to reclaim control over their daughter.

Despite the blood and gore, the central theme of the movie seems to be the duty owed to one’s family and the grudges that can poison familial relationships. At the very heart of the movie is the witch’s unfulfilled grudge and thirst for revenge against her daughters that causes her to try and gain control of her granddaughter. Right at the offset, we understand there is no love lost between Alicia and her mother. Initially, it appears to be because of the eccentric woman’s tendencies towards witchcraft and how she scared her children with her practices. However, as the plot unfurls, we realize that the hatred manifested itself because the mother blamed her daughters for the death of her husband, who she loved very much. Thus, ‘The Influence’ becomes a film where the evil is propagated due to anger over lost love and not just out of malice.

Amidst all this, the movie drives home the point that we must be ready to face our own pasts if we are to confront the demons in our lives. Alicia attempts to face her deepest demon of having murdered her own father accidentally and narrates it to her daughter, who is under the influence of the witch. The enunciation itself is an act of acceptance and apology that she hopes will be enough to win her daughter back. However, the grudge runs too deep and it is only a violent confrontation that results in a resolution of this deep-seated family conflict.

‘The Influence’ makes a twisted attempt to drive home the message that a grandmother always has her granddaughter’s best interests at heart. It is a chilling message uttered while Nora is being brought under the influence — and repeated when the movie has seemingly reached its conclusion. Perhaps the innocence of the emotion behind the relationship shared by a grandmother and granddaughter is what gets polluted in the witch’s quest for revenge. It can only manifest itself as a haunting afterthought after she is completely gone from Nora’s life.

‘The Influence’ grapples with several core familial themes that are hidden under the guise of horror. As far as an exploration of family trauma goes, the movie does a good job. As far as the scares go, ‘The Influence’ could have done much better.