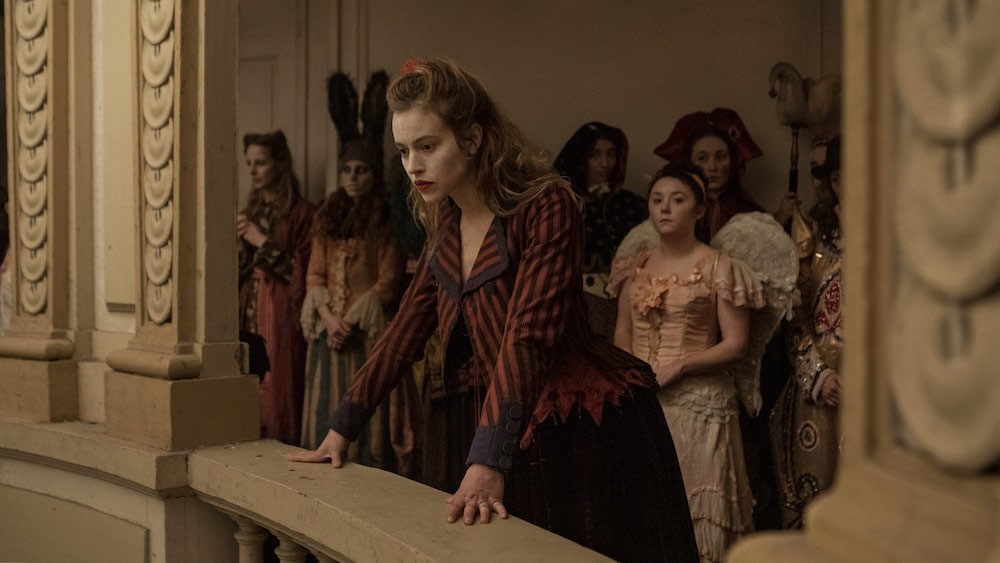 In ‘The Mad Women’s Ball’ (originally titled: ‘Le Bal Des Folles’), patriarchal oppression in late 19th century France takes a palpable institutional form, at times bizarre and at times plain outrageous. Melanie Laurent paints her women-centric movie with a challenging, intense, and impressionable palette that hooks the audience right from the beginning to the end. While the film sheds light on a dark chapter in the history of medical science, it ushers a revolution against centuries of oppression on feminine subjectivity.

The story, borrowed from the titular novel by Victoria Mas, follows Eugénie, an outspoken and radiant psychic woman who gets admitted to an infamous asylum after confiding about her supernatural powers to her close ones. In the institution, she comes to befriend the head nurse, and together, they must find a way out of the bizarre dystopia.

The impeccably crafted period drama is guided by a somber score and meditative camera work. The ending is bittersweet as the protagonist flies over the cuckoo’s nest, leaving her friends behind her. If you seek to recollect the final moments in detail, let us embark upon a thorough discussion. SPOILERS AHEAD.

Eugénie is a woman of the new world – passionate, outspoken, full of pent-up energy. She has a loving brother in Théophile, who encourages her in all her pursuits. However, the oppressive regime of her father, like her corset, often becomes heavy on her heart. When her family friend Hortense gets excited about “being presented” at a high-society ball, Eugénie is characteristically condescending. 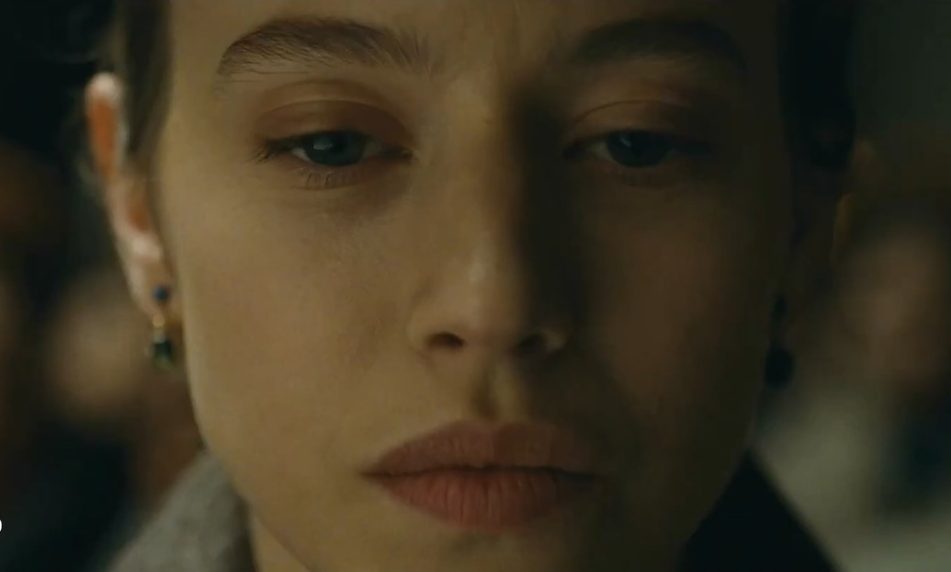 While reading a book, she meets charmer Ernest in a cafe, insistent that she is looking at him. However, Eugénie was actually looking at the book that Ernest was reading, and without giving it much thought, Ernest lends her the reader with a personal note. Eugénie finds consolation in the book – ‘The Book of Spirits’ – since it reinstated her faith in her psychic powers. We know that Eugénie sees apparitions and spirits, and she was made to think it is unnatural.

However, the book reassures her of the existence of ghosts. After finding the lost necklace after 40 years, Eugénie confided in her grandmother about her visions. It turns out to be a miscalculated move as on the following day, Francois and Théophile take her to the notorious Salpatriere asylum. At the asylum, she befriends other girls and realizes that the doctors are making them more deranged in the name of curing them.

Set in late 19th century France, in the bleak atmosphere of the Salpetriere, the first thing one notices is that all the inmates are women, while all the doctors are men. Originally a gunpowder factory, the building was converted by Louis XIV into a hospital, mainly to treat women with epilepsy, intellectual and physical disabilities. In the early examination, head nurse Geneviève declares Eugénie as reasonably healthy. We soon come to realize that Eugénie possesses psychic powers that are outside the purview of scientific rationality.

The women are treated like lab rats by head doctor Charcot and his team of apparently skilled medical students. Upon protesting, Eugénie is prescribed the cold water treatment, followed by the hot water treatment. The doctors also use hypnosis as a cure, and their methods come off as unreliable and even brutal in a 21st-century context. After a lousy treatment, Eugénie’s fellow patient Camille develops partial quadriplegia. 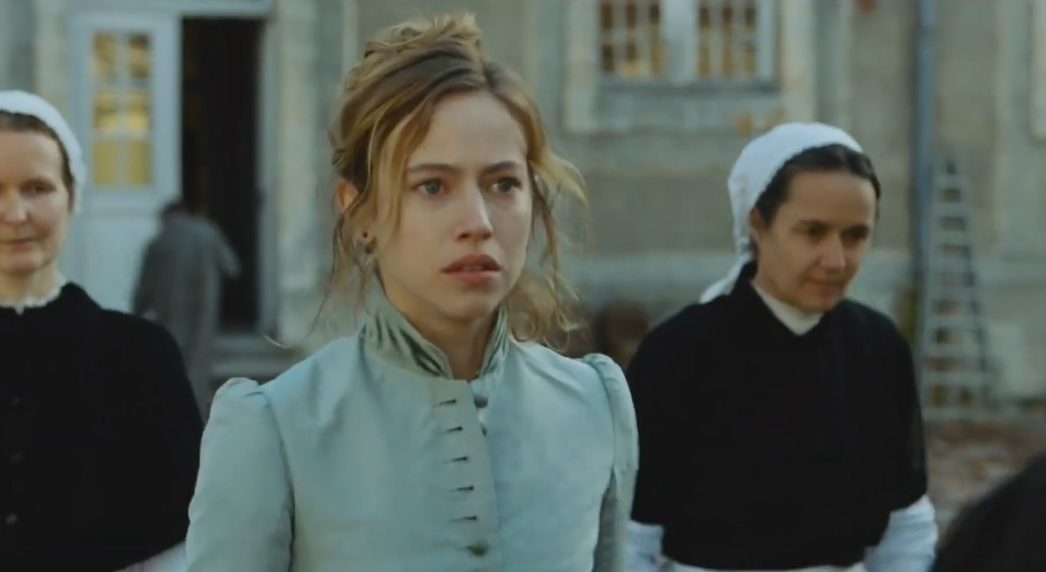 The sight breaks Eugénie, and as she can see right through the patriarchal facade of decorum and socially acceptable manners, it pains her even more. She accuses Charcot and other doctors of catalyzing insanity rather than curing it, and in turn, is sent to the claustrophobic old cells of the hospital. After the proof, Geneviève sides with Eugénie, but as her case is handed over to cold-hearted nurse Jeanne, Geneviève finds herself helpless.

Jeanne has a menacing air around her, and at first glance, she comes off as a sociopath. The second glance only solidifies the belief. However, Eugénie can break her as well, albeit momentarily. She rightly sees Jeanne’s mother admitted to the same hospital, but it’s no secret, according to Jeanne. When Eugénie tells her that she knows what Jeanne’s mother did to her son, Jeanne breaks into tears. But she shortly gathers herself and begins to torture Eugénie instead.

Jeanne is uneasy with her emotions, and her erratic action tells something about her repressed self. By this time, we realize that Eugénie has no psychological anomalies whatsoever – she is instead a visionary seer. In the medieval age, eccentric ascetics were revered as visionaries and psychics. They could tap into the realm of the sublime. The representation changed after the enlightenment, as a game of exclusion was played to dogmatize the psychologically deviant. However, the titular ball at the finale sheds some light on those who actually need to be healed. Foucault stresses in his prophetic ‘Madness and Civilization’ that man’s self-attachment ultimately makes him accept violence and ugliness as beauty and justice, which forces an illusory reality onto him.

Dr. Jules coaxes Camille from the early moments, and his true intentions come to the fore at the ball. Against Camille’s wishes, he takes her to an empty room and tries to force himself on her. Camille screams and shouts, but the beast in Jules does not let her go. He begins to rape her but is dissuaded from his diabolical act as Geneviève storms into the room. With these heart-shattering events, Geneviève comes to realize that what patriarchy is keen to tag as hysteria is the feminine will to assert itself. Concluding Eugénie to be perfectly sane, she arranges an escape plan for her.

Why Does Geneviève Help Eugénie Escape? 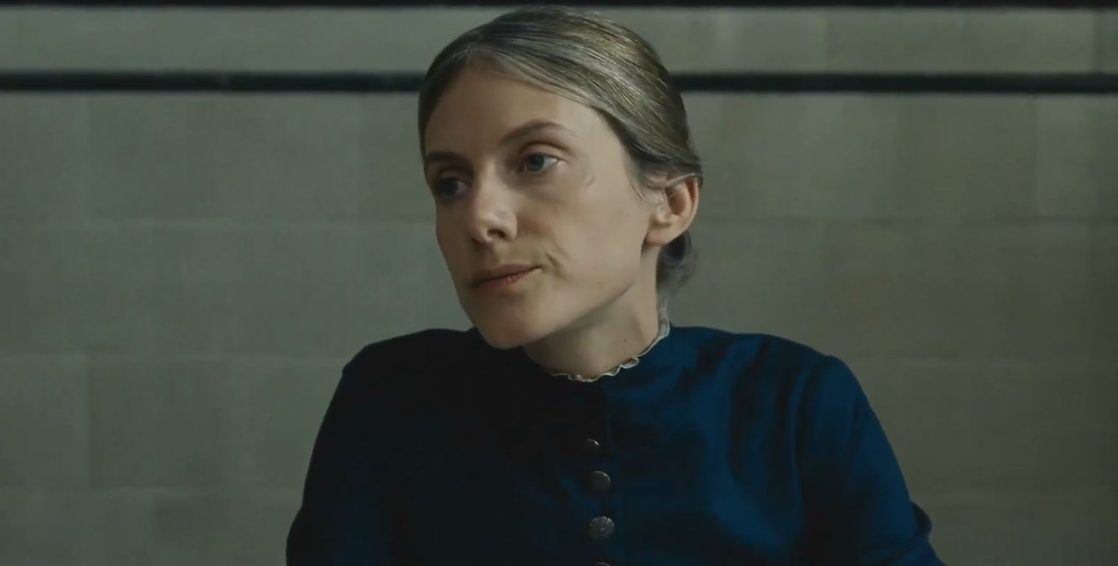 Geneviève initially treats Eugénie the same as others, but after Eugénie divulges pertinent truth about Geneviève’s sister, the nurse comes to realize Eugénie’s unique abilities. Following the death of her sister Blandine, Geneviève has written thousands of letters to the deceased. No one can know that, but Eugénie seems to see right through Geneviève. The nurse is skeptical at first, but Eugénie communicates with Blandine to rightly predict the accident of Geneviève’s father, and Geneviève rushes to the house to discover her father bleeding.

Geneviève’s father urges her to blurt out the miracle that sent her, but when Geneviève tells him the truth, he readily dismisses it and calls Geneviève mad. Dissuaded from her father, Geneviève comes to realize that the disciplinary mechanism of the institution is informed by blind-eyed patriarchy. Therefore, while her father readily dismisses the seemingly irrational miracle, Geneviève puts her faith in Eugénie. She secretly communicates with Théophile and asks him to come to the ball.

Geneviève helps Eugénie escape while taking the brunt herself. Now, with the act, Geneviève is diagnosed as mentally ill, and in a twisted turn of fate, serves her own time in the asylum. Eugénie writes a final letter to her, where she urges Geneviève to keep on dancing. Dancing here is also symbolic since although a 19th-century woman has to dance to the tunes of a patriarchal vigilante, she reasserts her artistic freedom through the creative act of performance.

Read More: Is The Mad Women’s Ball Based on a True Story?