‘The Searchers’ is the Greatest American Western Ever Made. Here’s Why. 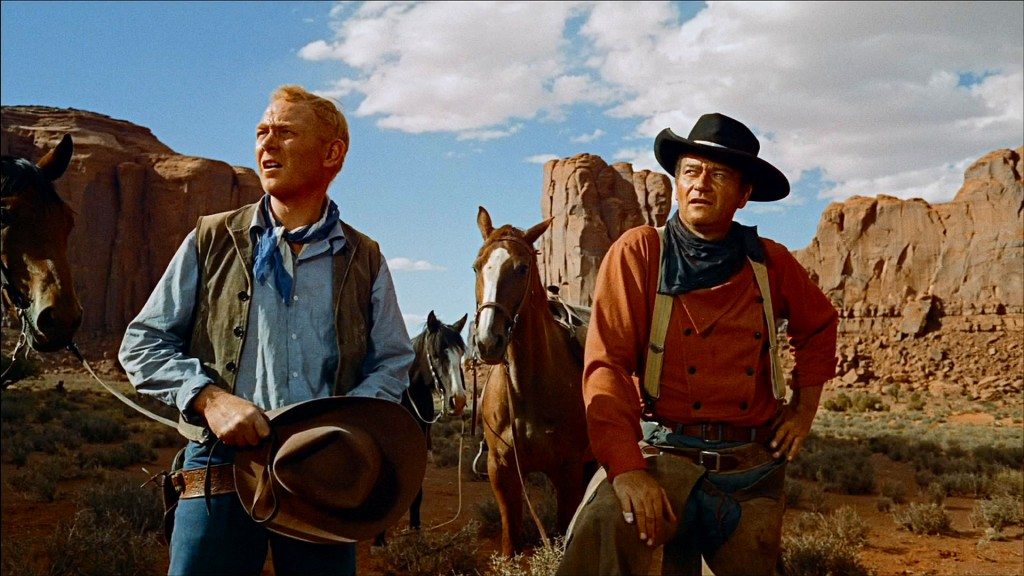 Arguably the greatest western ever made, the finest film of John Ford’s great career, and containing John Wayne’s finest performance, The Searchers (1956) is an American classic, among the finest films to emerge from the fifties. Though admired and respected at the time, its lacerating, staggering power was not recognized for a few years, but by the early seventies it was hailed as a classic of the genre and perhaps the finest western ever made. Certainly time has eroded some of the films power, but not that towering, raging performance from Wayne, nor the racism within the film which fuels the anger and rage.

Martin Scorsese hails the film as one of the greatest ever made, Steven Spielberg insists it had a profound influence on him as a director, George Lucas adores the picture, and Sidney Lumet believed it to be the greatest American ever made. Their admiration of John Ford was legendary, the fact they admire this work so much speaks volumes to its greatness. Some of them have called the film “the first psychotic western” speaking to Wayne’s dangerous hero Ethan, unlike anything he had portrayed before, his eyes ice cold tinged with an anger that would not go out. 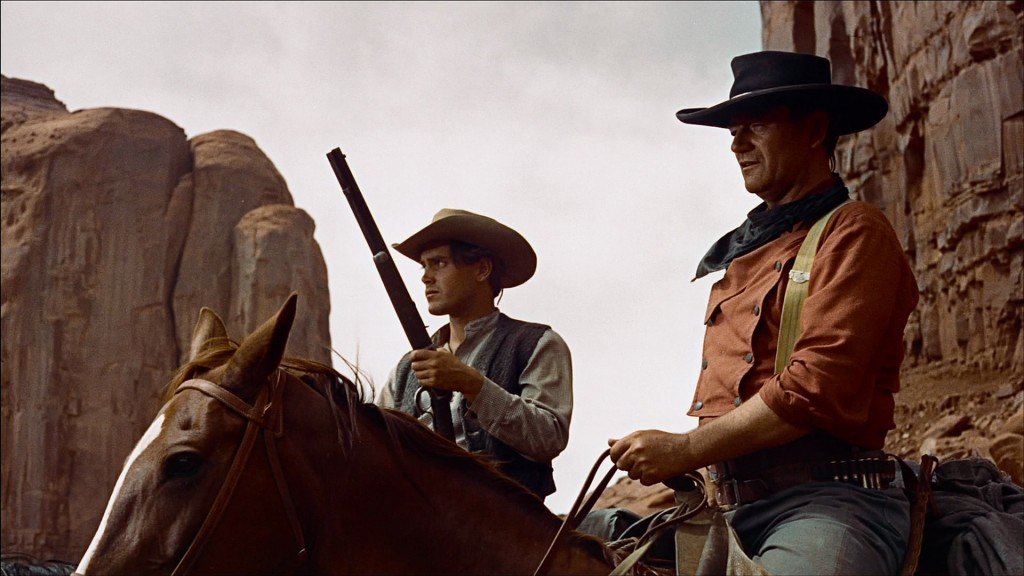 Ford often shot on location in Monument Valley, where the landscape dwarfed man, where we got an idea of the rugged world conquered by man in taming the west, and where we see the punishing world these people lived in during the 1860’s. As the blackness of the screen becomes a door opening into the wilderness, we are among the settlers, watching as a lone man rides to their farm. He is Ethan Edwards (Wayne) a wandering, weary soldier finally home to his brother Aaron and his family. They are very different men, Ethan a wanderer, a warrior, whereas Aaron is a farmer, happy to be close to home and indoors, while his brother is happiest under the night sky and wandering that ferocious landscape. A dubious character, possibly a wanted man, Ethan tosses his brother two bags on newly minted gold coins, and the marshall says he fits a lot of descriptions. His intense hatred of the natives is made clear, even when encountering Martin Pawley (Jeffrey Hunter), part native, whom Ethan saved when a baby. But for all huis hatred, he knows them, he understands better than most, and shares many traits with them that no doubt leads to some self loathing. 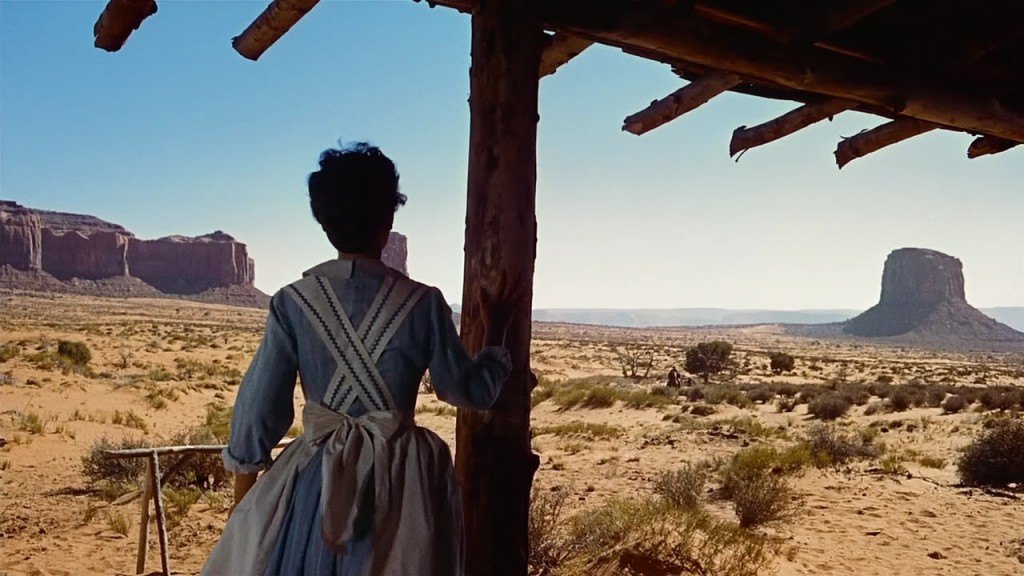 When Ethan and the men are called away to check on another farm, a plot to pull the men away, marauding Indians come and massacre Aaron and his family, kidnapping the two girls, slaughtering the rest of them including Martha, the wife of Aaron whom Ethan loves. Martin demands to go with Ethan on his search to find the girls, and is permitted to do so provided he stays out-of-the-way. Their search takes them to a canyon where Ethan finds his older niece, raped and murdered. Burying her in his jacket he comes back to the camp where the boys interrogate him about what he found in the canyon. He roars them down, “Never ask me again! Long as you live, don’t ever ask me again!”

For five years they search for Debbie, the younger sister coming close but never quite managing to find her. On the journey Martin begins to understand the depth of Ethan’s hatred for the natives, and slowly comes to realize he does not mean to bring Debbie home at all, he intends to kill her for being defiled by the Indians, for living as one of them. He shoots the eyes out of two dead natives they find on the way, kills buffalo to keep their bellies empty, until finally they come to a camp where they see her, now grown, a woman. 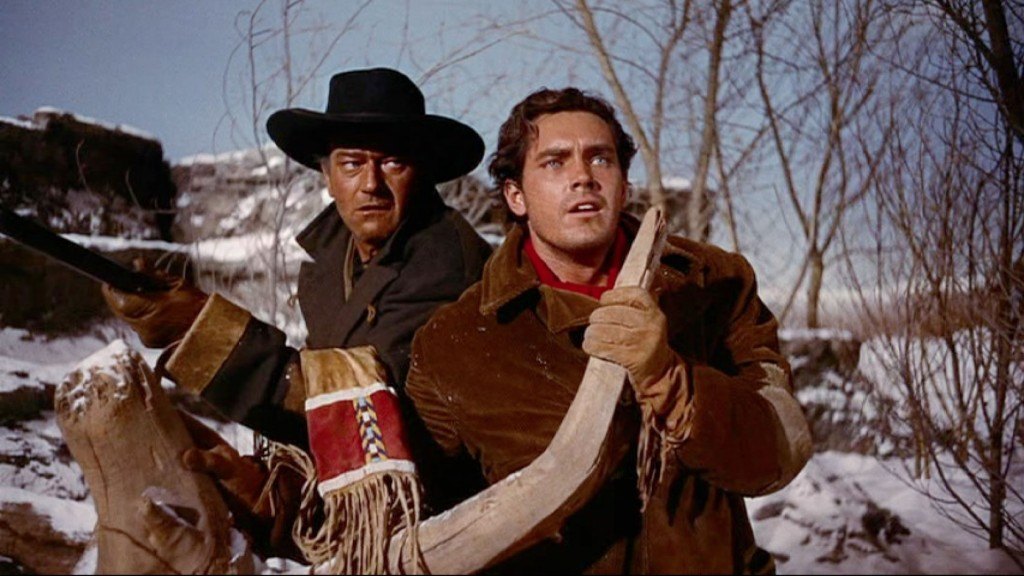 Knowing Ethan as he does, Martin tries to keep her away from him,  but the two eventually come face to face. Ethan lifts her high in the air as he once did when she was a little girl, then sweeps her into his massive arms, and whispers “Lets go home Debbie”. Face to face with his blood, the last of his true family, Martha’s daughter, he cannot kill her. Ethan has found what he did not expect to find, his own humanity. In Debbie he sees Martha, he sees himself, and he cannot kill the girl because to do so would be killing Martha and a part of himself, his family. He takes her back to civilization where she will live the rest of her life as a white woman. Welcomed back with open arms, the group enter the house, except Ethan. He stands on the outside looking in, never able to live in a house, like the natives, forced to forever wander between the winds. The door closes, shutting him out.

When first released in 1956, The Searchers (1956) earned strong reviews and did well at the box office, but I am not sure anyone except the makers understood just how great a film it was. Historians and up and coming directors such as Coppola, Scorsese and Spielberg raved about the film, and French President Charles de Gaulle commented he was not sure how John Wayne could fill him with such loathing for Ethan and then in a single moment fill him with such love.

Through the years, like Citizen Kane (1941), The Searchers (1956) has been elevated to a unique place in film history, now considered one of the greatest films ever made, and arguably the greatest western ever made. 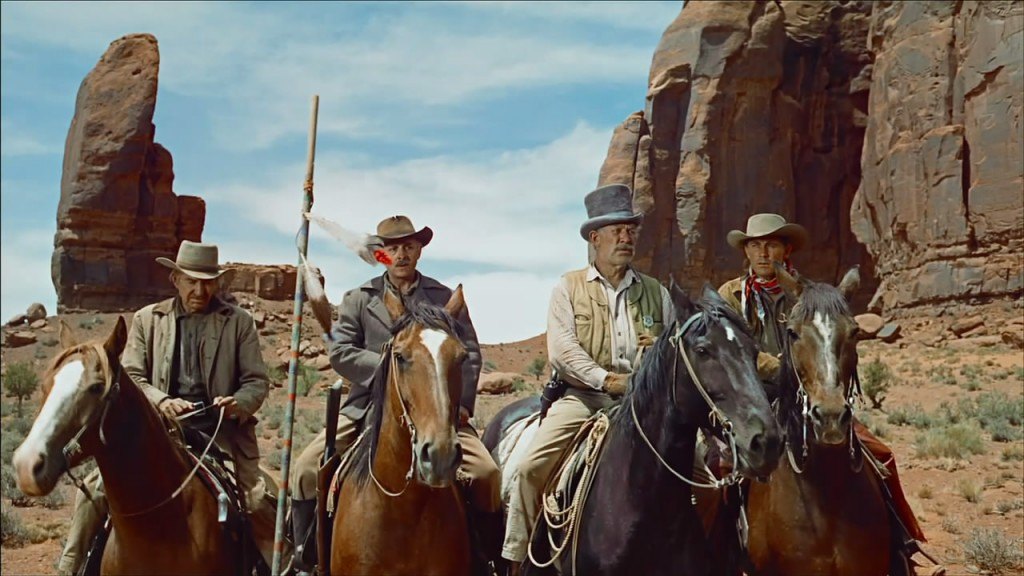 Wayne often criticized as an actor for much of his career was never better than he was as Ethan, leaving film historian, filmmaker John Milius to declare, “I think John Wayne’s performance is the greatest I have ever seen, the greatest in movie history”.

The film feels like a dream after seeing it, you cannot quite believe what you have encountered after it is done. Wayne, the all American hero is a racist maniac, possibly a psychopath, hell bent on killing natives if he can, more concerned with killing his niece when he sees her for being defiled. He cannot bear to think of her with an Indian buck (as he calls them) and welcomes the chance to put a bullet in her brain. The look of absolute hatred on Ethans face when he encounters white women gone made by their time with the Indians is shattering, we see for the first time the intensity of that hatred, the complexity of it, the never ending depth of it, that even he does not likely entirely understand. What has Ethan seen to make him this way?Obviously some horrific things, but more is to be asked what has he done? When he enters his brothers smoldering cabin after the raid, it is Martha he calls for, we know Martha was raped, torn to pieces, can one imagine what that did to him. And later finding Lucy in the canyon, sexually assaulted, tortured, murdered. He wraps his neice in his coat and buries her. When asked about it he roars them down, “Long as you live, don’t ever ask me again.” 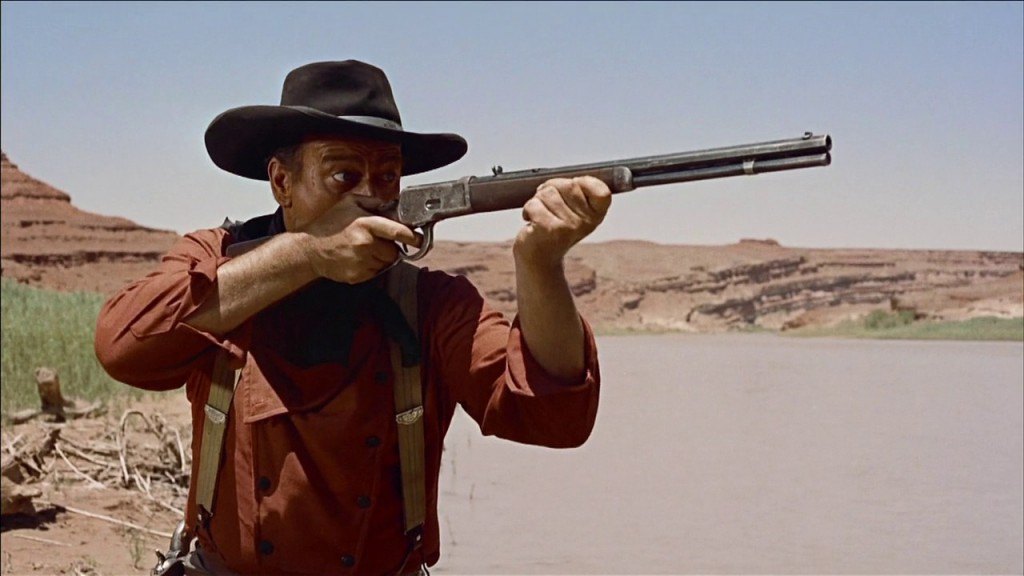 Wayne gives a towering performance in a magnificent film, both intimate and epic in its scale. The beauty and grandeur of Monument Valley dwarfs the men as the move through it, leaving us to wonder how the settlers ever conquered the country. Yet Ethan is himself, a mountain of a man, as powerful as the mountains in the Valley, one with the land, as constant as the wind. He is forever a wanderer, not comfortable in society, too savage perhaps, to filled with rage. Ethan Edwards is a gathering storm, one can feel the storm clouds surrounding him as he rides onto his brother’s property. His rage ignited he is a murderous force, unstoppable.

Fords direction is superb, allowing the Wayne film to anchor the film, making it both intimate and yet epic in scope. He handles the passing of the years as the men search brilliantly, the changing of the seasons, the reading of letter written a year previous, small subtleties that allow time to pass without a title card, or subtitles, Ford believed in the language of the cinema and from that language he gave his films a visual poetry very few directors ever brought to the screen.

Today, sixty one years after its release, yes there are elements that date the film, some of the supporting performances are corny, the portrayal of the settlers are often folksy. Yet the driving narrative of the film, Ethan and his search is timeless, as powerful today as it was back then, perhaps more so because so many of the subtle story points are now clear. Rape was alluded too, torture was not openly portrayed or discussed but very much there, and Ethan’s racism, while there, is more apparent now.

The most extraordinary work from John Ford and John Wayne, ‘The Searchers’ is an essential viewing for anyone who claims to love the cinema. A dark, disturbing, stunning work of art.

Read More: The 10 Best Westerners of the 21st Century