‘The Signal’ is an indie sci-fi mystery film directed and co-written by William Eubank and stars Laurence Fishburne and Brenton Thwaites. The film follows the adventures of three college students as they get lured into being abducted by aliens, and what follows is a mind-bending journey as they, and the audience, try to figure out just what is happening to them. Well, we are here to try and unravel some of the knots in this brave piece of sci-fi cinema that has left most viewers scratching their heads. SPOILERS AHEAD.

The movie opens with three MIT students, Haley (Olivia Cooke), Jonah (Beau Knapp), and Nic (Thwaites), driving to California to drop Haley off, which has put a strain on her and Nic’s relationship. Along the way, Nic and Jonah manage to locate a hacker who has been taunting them and decide to go and confront him. Upon reaching his location, they find it abandoned, after which first Haley and then Nic and Jonah are abducted.

The scene showing Haley getting pulled up into the sky is where we start to realize that there is a lot more going on in this film than we have been led to believe, and the twists don’t let up for the rest of the movie. Waking up in a sterile facility, Nic finds himself surrounded by men in hazmat suits which, they inform him, are to avoid contamination as he has been in contact with an EBE (extraterrestrial biological entity). As the movie progresses, Nic gets more and more frustrated at not being able to see Haley and Jonah, even while he speaks to Jonah through a vent in the room where he is being held captive.

He also catches a glimpse of Haley and is told that she is in a coma. Nic begins to plot an escape from his captors as he attempts to figure out just what is happening. The breaking point comes when he realizes that his legs, which are shown to be degenerating since the beginning of the film, have been amputated and replaced with prosthetics made from alien technology. He uses the strength of his new legs to break himself and Haley out of the facility.

The Signal Ending: Where Are The Protagonists Exactly?

Soon after escaping from the facility, Nic realizes that there is something not quite right with the outside world. He first feels this when observing the old lady who gives them a lift, and then when he and Haley realize that they are on a piece of land that keeps taking them around in circles. Later on, Jonah makes an appearance and tells Nic that they are, in fact, trapped and being experimented on inside the government facility called Area 51. He supports his theory by pointing out how all the cans and containers around them are empty. There are also the numbers tattooed on their arms: 2.3.5.41 add up to 51. 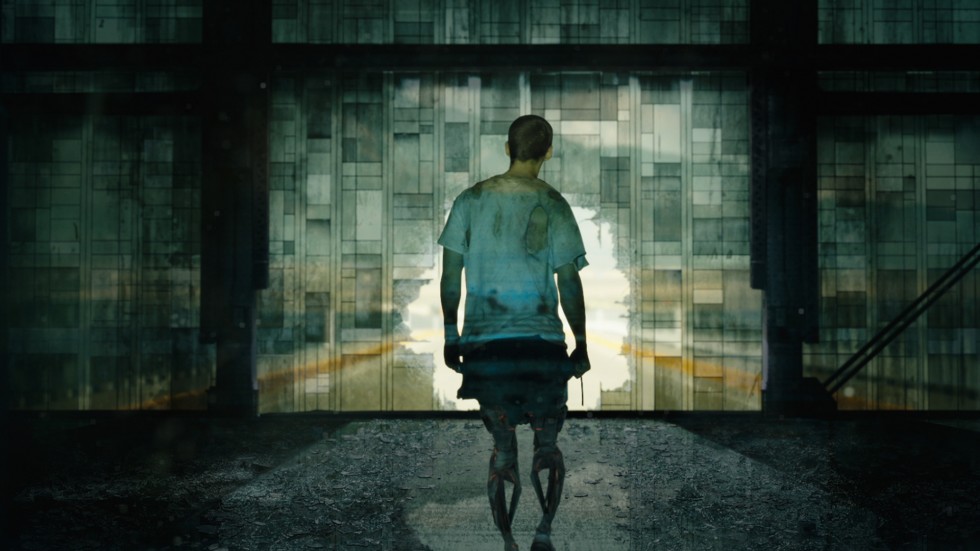 After Jonah uses his own newly acquired prosthetic hands to distract the guards and allow Nic and Haley to escape on the truck, we see that their path is once again blocked by Damon and his men. The truck is overturned and Haley is captured and flown away on a helicopter. Nic realizes that Damon is the hacker that lured them in the first place and Damon readily admits to it and retorts that it is Nic’s fault for coming to look for him. Damon, then realizing that Nic has learned to use the power of his prosthetic legs, warns him not to try and follow Haley. Nic pauses and then summons all his pent-up emotions, which seem to charge his legs with energy, and bursts through the barricade and onto the bridge leading out from what he thinks is Area 51.

As Nic travels faster and faster on the bridge, he bursts through a barrier that seems to be a part of a bigger installation that houses the world that he has just burst out from. Damon walks up to the barrier on the other side and takes off his helmet, revealing himself to be a mechanical alien being. Turning around, Nic sees a massive, star-filled sky and realizes, along with the audience, that he is in space. The last scene of the movie shows the massive convex alien spaceship that Nic and all the other beings are on, floating through space. The ship seems to have an entire alien city on its underside, and in the background, we see another one like it. “2.3.5.41” is printed in giant numbers on the side of the ship.

The meaning of 2.3.5.41 first starts to become clear when Jonah explains to Nic that the numbers add up to 51 and hence, they’re in Area 51. This is when both of them still believe that they are on Earth. However, the real mystery is why the alien spaceship shown at the end of the movie has the same numbers printed on its side.

One possible explanation for this is that the alien spaceships are divided into different vessels for different planets. The one that Nic is on is in charge of Earth and therefore has human number markings matching the tattoos of the subjects onboard. Another explanation takes a clue from the vintage technology that we see in the facility which seems to be from the same time as when Area 51 was supposed to have hosted aliens.

These may be the very same aliens who still have an affiliation with Area 51 and have been conducting experiments over the years, trying to integrate humans with alien technology. Director William Eubank has mentioned how he has always been fascinated with Area 51 theories and wanted to use them in his movies but in a non-obvious way. Well, it seems like he’s done it and it’s got us all scratching our heads a little.

What is the Signal?

After watching the film, most viewers wonder what exactly “the signal” is. Is it the sounds that the crazy old lady hears from the sky? Is it the message that Nomad sends to Nic and Jonah in the beginning? Thankfully, this time the director comes to our rescue. Eubank believes that “the signal” refers to the moment when the characters realize something, like an epiphany that finally leads to understanding. This is most clearly seen in Nic’s character.

After trying to wall himself in and act on logic instead of emotion so that he can be “strong,” he finally realizes his greatest strength when he begins to feel his emotions instead of pushing them away. He gets it. He gets “the signal,” which allows him to break through and see reality for what it is. Up to an extent, we also see Jonah get “the signal” when he resigns himself to his fate and realizes that all he needs now is for his friends to escape, even if he has to sacrifice himself for it. Using the word “signal” is a bit of a misdirection since most viewers expect it to be related to the sci-fi aspect of the movie and not to the emotional one.

What is the Deal with the Truck Driver and the Old Lady?

The two other humans that Nic and Haley encounter after escaping the facility seem to be teetering on the brink of madness. The old lady in the car seems friendly enough but soon starts showing signs of abnormality. The truck driver, on the other hand, seems to be clinging on so tightly to his delusions that despite all the extraordinary things happening around him, he still believes that he’s living in his mother’s house with his pet cat. 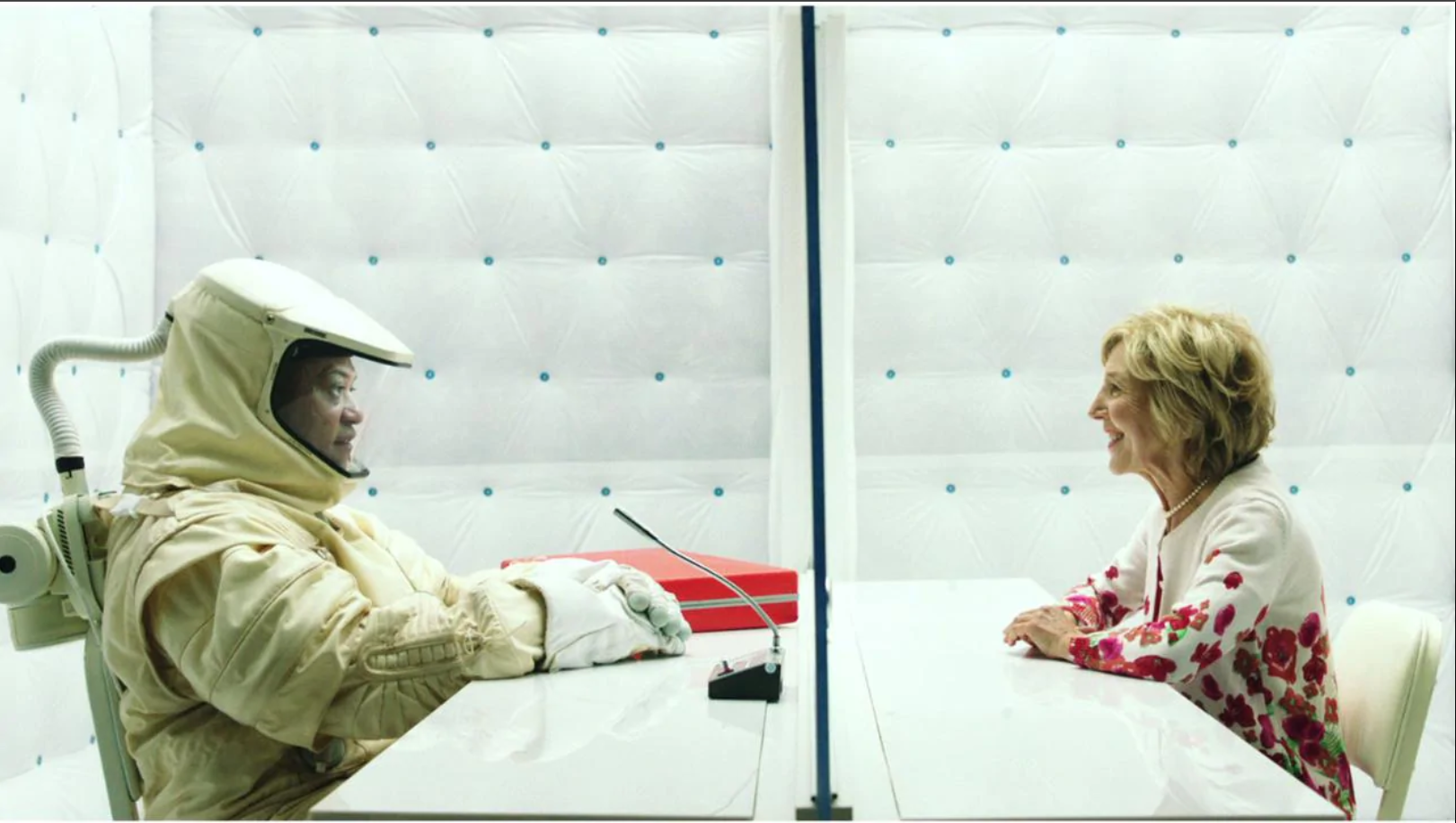 We see this reinforced in the scene when Damon, just before executing the truck driver, remarks as to how resilient he is for having survived for so long. Before this, he also executes the old lady who is seen at the facility, glitching and repeating her words again and again. There is a consensus amongst most critics and viewers that these two humans are previous test subjects that have since been released as they are no longer of use to the aliens.

However, both of them have lost their minds either as a result of being abducted or because of the subsequent experiments performed on them. The sequences involving the two humans also offer clues as to Damon’s alien identity and the ending of the film. The first clue is the red briefcase that Damon carries his gun in, almost as if it is a special piece of equipment. This could be because to him, as an alien, the gun genuinely is a special piece of equipment used specifically to kill Earthlings. 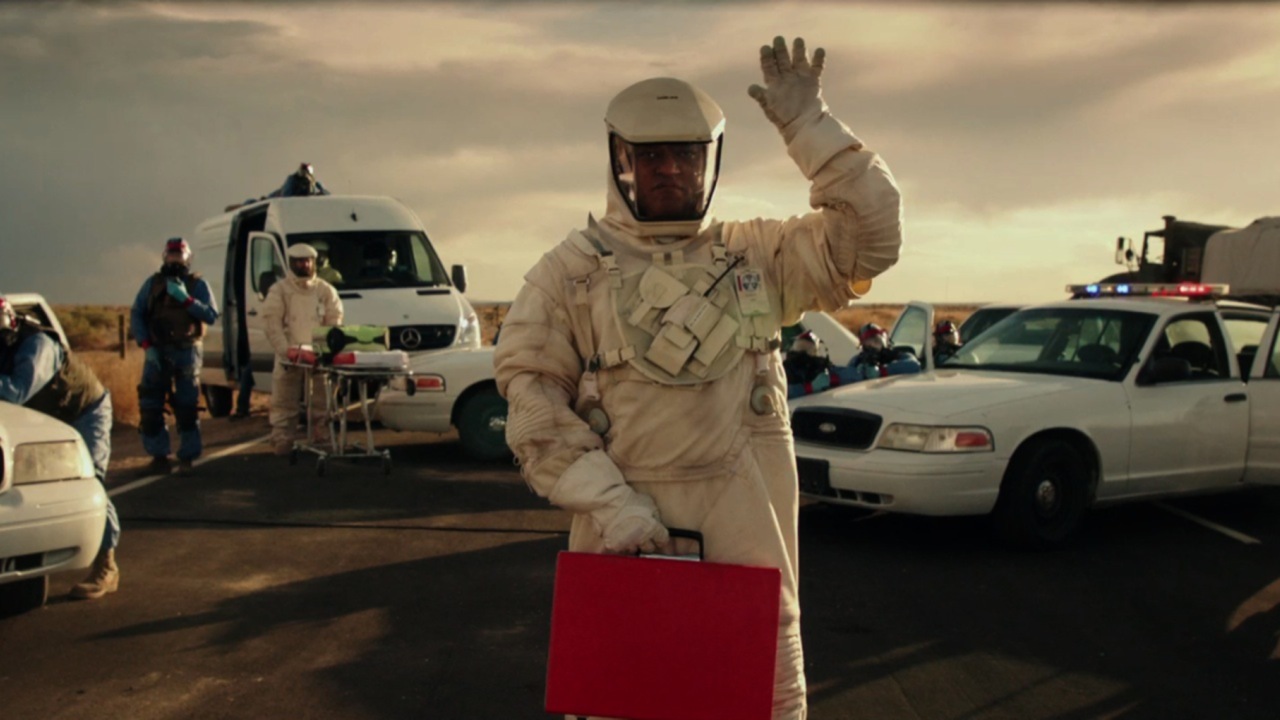 Of course, the guards that work for him also have guns, but they could very well be brainwashed humans or simple alien machines. For Damon, who seems to be higher up in the alien hierarchy, the gun would be a special tool. The second clue is the goldfish that Damon puts back into the bowl after shooting the truck driver. This could possibly point to the end of the movie when Nic, and the audience, finally realize that they themselves have been in a fishbowl this whole time; it is merely made to look like Earth.

What Happens to Nic and Haley Afterwards?

At the end of the movie, Nic realizes that he is on an alien spaceship teeming with alien life. He has also recently realized the incredible potential of his prosthetic legs (he literally outruns a bullet) and what he can do when he lets his emotions go and follows them. The big question is what does he do next?

He realizes that he cannot run any further, since he is in space. Also, now that he knows that his captors are aliens and they have Haley, maybe he decides not to run but waits and sees what they have to offer. In the course of the movie, there are two sources of Nic’s frustration: his handicapped legs and his need to know what is going on, especially in terms of Haley’s wellbeing.

Now both sources are almost pacified, and provided the aliens don’t harm Haley, we can venture that maybe Nic cooperates with them. Another reason why he might cooperate is that even though Damon and his men tolerate Nic’s constant escape attempts with a sort of disconnected affection, they have shown that they are willing to kill him (as they did Jonah) if things get out of hand. So there seems to be no logical incentive for Nic to revolt against the aliens. However, as we have seen at crucial points in the movie, Nic sometimes acts out of emotion and not logic.

Haley is the big mystery in the movie. Though her character seems to often be the “damsel in distress,” she plays a huge role in Nic’s eventual breakthrough. After her abduction, for the remainder of the movie, she is either in a coma or in a semi-coherent state. This is most likely the result of the alien prosthetic that she has received. Whereas Nic and Jonah get prosthetic legs and hands respectively, we see an implant in Haley’s neck, which means her alien prosthetic could either be in her spine or her brain.

In either case, it is a much more complex merging of alien technology with humans. This would explain her long coma and slower brain function as it takes her longer to recover from the procedure. However, after seeing the immense power that the alien prosthetics give Jonah and Nic, one can expect Haley to be capable of some incredible feats once she has recovered. It is rumored that director William Eubank actually wanted to explore Haley’s character more for exactly this reason but later decided against it for this movie. Suffice it to say, we’d be very excited to see a sequel.

Read Next: Most Underrated Sci-Fi Movies of the 21st Century