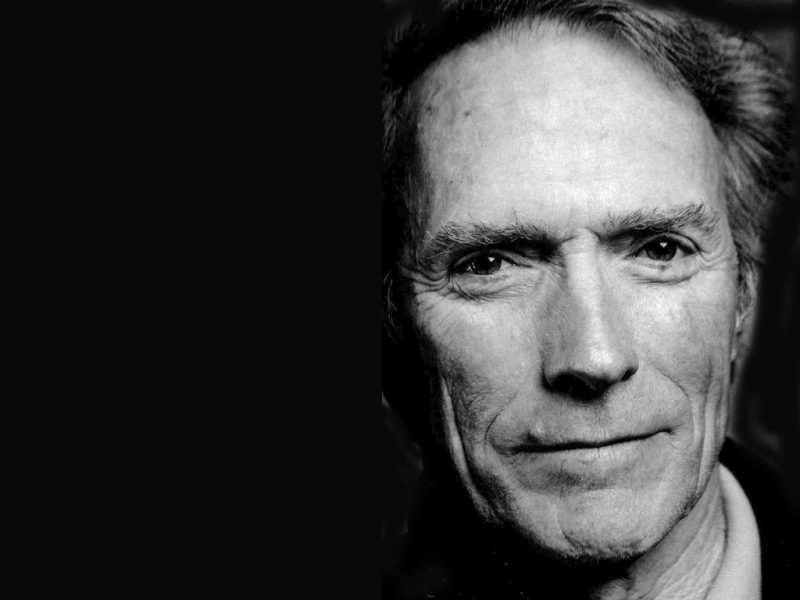 Had anyone said to me in the seventies that Clint Eastwood would one day be among the greatest directors in cinema I would have laughed in their face. At that time (1970-79), Eastwood was best known as an actor with limited skill, best known for his strong silent types such as Dirty Harry (1971) and though he had started to direct, with some success, Play Misty for Me (1971) being an excellent thriller, there was nothing to suggest he would become one of the finest at work. And yet he has.

Eastwood spent his career cutting deals with the studio, making one for them and one for him. He would do Dirty Harry 5 or 6 against his better judgement because then it allowed him to make something he wanted to make, Bronco Billy (1980) or the haunting Honky Tonk Man (1982). Warner Brothers understood his value as a major star and kept him in the fold and happy by letting him make films that were very personal. The budgets were small, Eastwood shot fast and came in on schedule (and still does) and on budget every time so they had no worries. He made them enough money in other films to appease the top brass. While he was making the films that matter to him, something extraordinary was happening to him as an actor…he was growing. As he evolved as a filmmaker he expanded as an actor as well, becoming a sublime artist, with greater range than anyone had imagined.

He gave some very fine performances under his own direction in films such as The Outlaw Josey Wales (1976), Bronco Billy (1980), Honky Tonk Man (1982) as well as excellent work for Don Siegel in Escape from Alcatraz (1979). When he directed Bird (1988) it altered the course of his career because suddenly everyone was talking about the Eastwood the director, not the actor…not anymore. When Steven Spielberg announced the nominees for the Directors Guild of America (DGA) in 1988 he announced with some disappointment that he had been hoping Eastwood would be nominated for Bird (1988), for though he should have been he was not. His bleak, dark biography of jazz great Charlie Parker was hailed at Cannes as a masterpîece and won Forest Whitaker the Best Actor prize. When released in America, the reviews were strong but not strong enough to catapult the film into the Oscar race where it belonged. 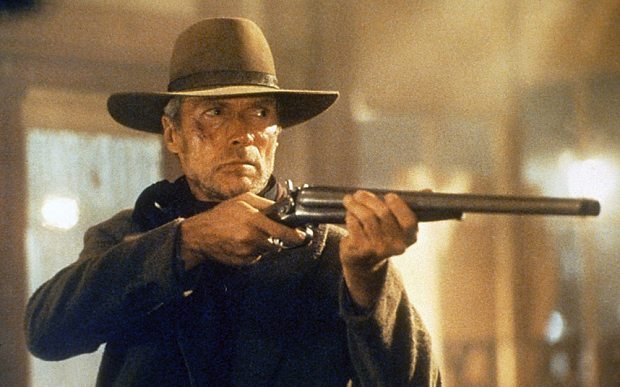 Four years later Eastwood dominated the Oscar race and end of the years critics awards with his western masterpiece Unforgiven (1992) a dark tale of how killing impacts your soul, forever altering you and changing you for the rest pf your life. As William Munney, a former gunfighter, killer, hated across the west for his acts, Eastwood gave the finest ^performance of his career, and surrounded by greats Gene Hackman, Richard Harris and Morgan Freeman, the film was a case study in ensemble work. Released in the summer of 1992, at the end of the year the Los Angeles Film Critics honored the film with Best Film, Actor (Eastwood), Director (Eastwood), and Supporting Actor (Hackman) prizes. Hackman won the New York Film Critics Award as Best Supporting Actor, while Eastwood finished runner up for Director, and the picture received nine Academy Award nominations including Best Film, Actor, Director, Supporting Actor and Screenplay. Eastwood won the DGA Award for Best Director as the Oscars came closer, and by the time the big night rolled around there was no stopping the western.

On Oscar night Eastwood won Best Director, at last, and his film won Best Picture, with Gene Hackman taking Best Supporting Actor and it won the Award for Film Editing. Unforgiven (1992) is now considered one of the greatest westerns ever made, and easily among the best films of the decade. It remains his masterpiece. He would make some very good films between 1992-2003, the great ones include A Perfect World (1993), which features a searing performance from Kevin Costner as a criminal escaped from jail and on the run, the magnificent and highly under appreciate The Bridges of Madison County (1995) with superb performances from Meryl Streep and Eastwood in an adult love story, Space Cowboys (1999) a terrific adventure seeing senior citizens in space out of necessity. And through that time there would be some lesser films too as Eastwood made his way to Mystic River (2003) a brilliant film about loss, lost childhood and living with your actions. It was a sensation when it premiered at Cannes, and received rave reviews when it opened in the summer off 2003. Nominated for six Academy Awards including Best Picture, Actor, Director and Supporting Actor it would take two Oscars for Sean Penn as Best Actor and Tim Robbins for Best Supporting Actor. 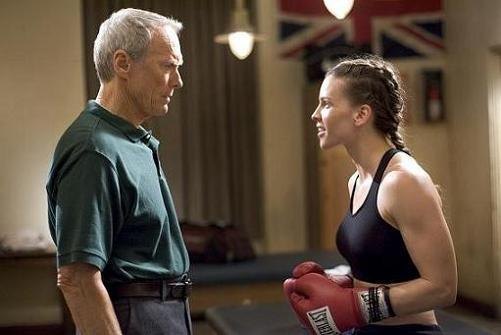 One year later he stood on the stage and accepted his second Academy Award for Best Director for his superb film Million Dollar Baby (2004) which came out of nowhere to win the Oscar race. The film also took Best Picture, Actress, and Supporting Actor, and stunned critics and audiences. Thought initially to be a woman’s boxing film it becomes about so much more through its narrative, and becomes instead about life and death and living the lifer you wish to live.

Eastwood was again nominated for Best Actor for his fine performance and watched as his co-stars won the Oscars, while he took Best Director. He won several critics awards for the film including the New York Film Critics Award and the DGA Award, as well as countless awards from across North America. There was little doubt now of his status as major American filmmaker.

He next teamed with Steven Spielberg and Dreamworks for the massive WWII epic Flags of Our Fathers (2006) based on the best selling book about the three men who raised the flag at Iwo Jima, caught in a photograph that became one of the most iconic in the history of the art form. While shooting the epic, he became fascinated with the other side of the story, the Japanese soldiers dug in deep on the island fighting the Americans and commissioned a screenplay about it. As soon as he finished Flags of Our Fathers (2006) budgeted at close to ninety million dollars he went off and shot the relatively low budget Letters from Iwo Jima (2006) for less than eight million dollars. The film, entirely in subtitles was an interesting companion piece to Flags of Our Fathers (2006) and would prove the greater success. Flags of Our Fathers (2006) opened to mixed reviews, forcing the company to rush Letters from Iwo Jima (2006) into theaters. They did and the critics went wild for the film, giving it rave reviews. It was eventually nominated for Best Picture and Best Director from the Academy, though Eastwood had no chance of winning Best Director over Martin Scorsese and The Departed (2006). 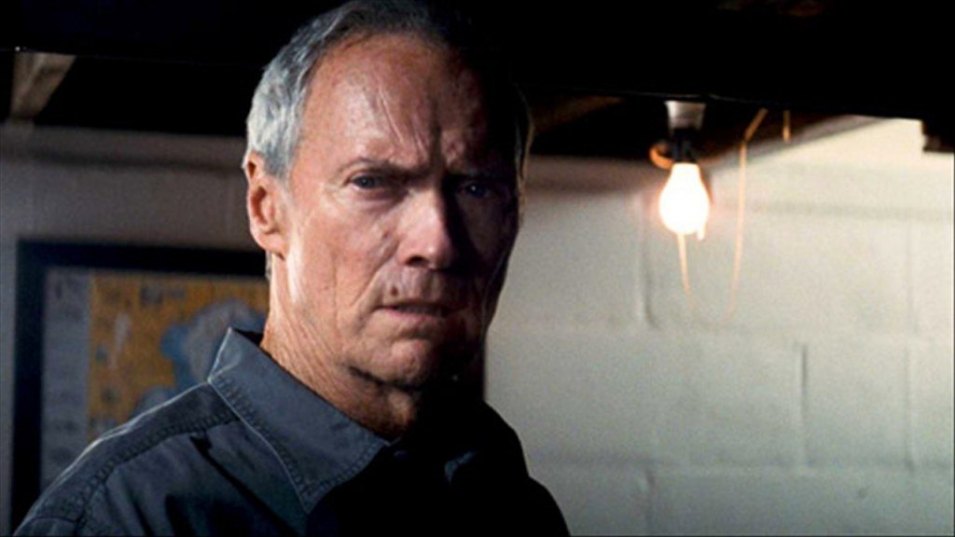 In 2008 he gave a wildly popular performance in a little film entitled Gran Torino (2008) in which he portrayed Walt Kowalksi, a bigoted widower living next to a family of Asians, whom he hates with a passion and makes no bones about it. However when one of them becomes his friend, or as close to him as another person can be, he will come to their defense when gangs move in and attempt to hurt them. Many felt, myself included that Eastwood should have been nominated for an Oscar for his performance, but for whatever reason the Academy missed him. Shame on them.

In the years since he has directed some wildly diverse films, including fulfilling his dream of directing a musical. He guided Angelina Jolie to a nomination for Best Actress for her performance in Changeling (2008), and then saw Morgan Freeman and co-star Matt Damon nominated for their work in the Nelson Mendala soccer film Invictus (2009). His eerie film Hereafter (2010) was radically different for Eastwood, but I personally loved it. An interesting study of after life experiences and communication with souls gone on was well acted by its cast, and haunting by the conclusion. It featured a stunning tsunami sequence that was nominated for an Oscar as Best Visual Effects, but sadly audiences nor critics liked it very much. The same was true for J. Edgar (2011) his bold film about young J. Edgar Hoover, which spans more than fifty years, and offered Leonardo Di Caprio one of his most challenging roles. Di Caprio delivers, he is terrific, but the film around him never quite comes together or takes off. The actor is better than the film as a whole, which is curiously muted and does not dig into Hoover like I hoped it might.

In 2014, Eastwood had two very different films that caused a stir, and placed him once again in the Oscar race. Jersey Boys (2014) was the adaptation of the stage play that told the story of Franki Valli and the Four Seasons, a band from New Jersey who rose to the top of the recording charts in the sixties, buoyed by the falsetto voice of its lead singer, whose life was filled with tragedy. Though hardly a perfect film, he did a great job with it, capturing the era, the music and best of all the life of Valli.
At the end of the year American Sniper (2014) caused more than a stir, knocking it out of the park at the box office with more than two hundred million within eight weeks. Bolstered by an Oscar nominated performance from Bradley Cooper, the film was a huge success, and found its way into the Oscar race, nominated for Best Picture. Though Eastwood was again nominated by the DGA as Best Director he was snubbed for the Oscars. Now in his eighties, his step might be slower, but he continues to make movies, good movies, and is among the most respected directors in the business.