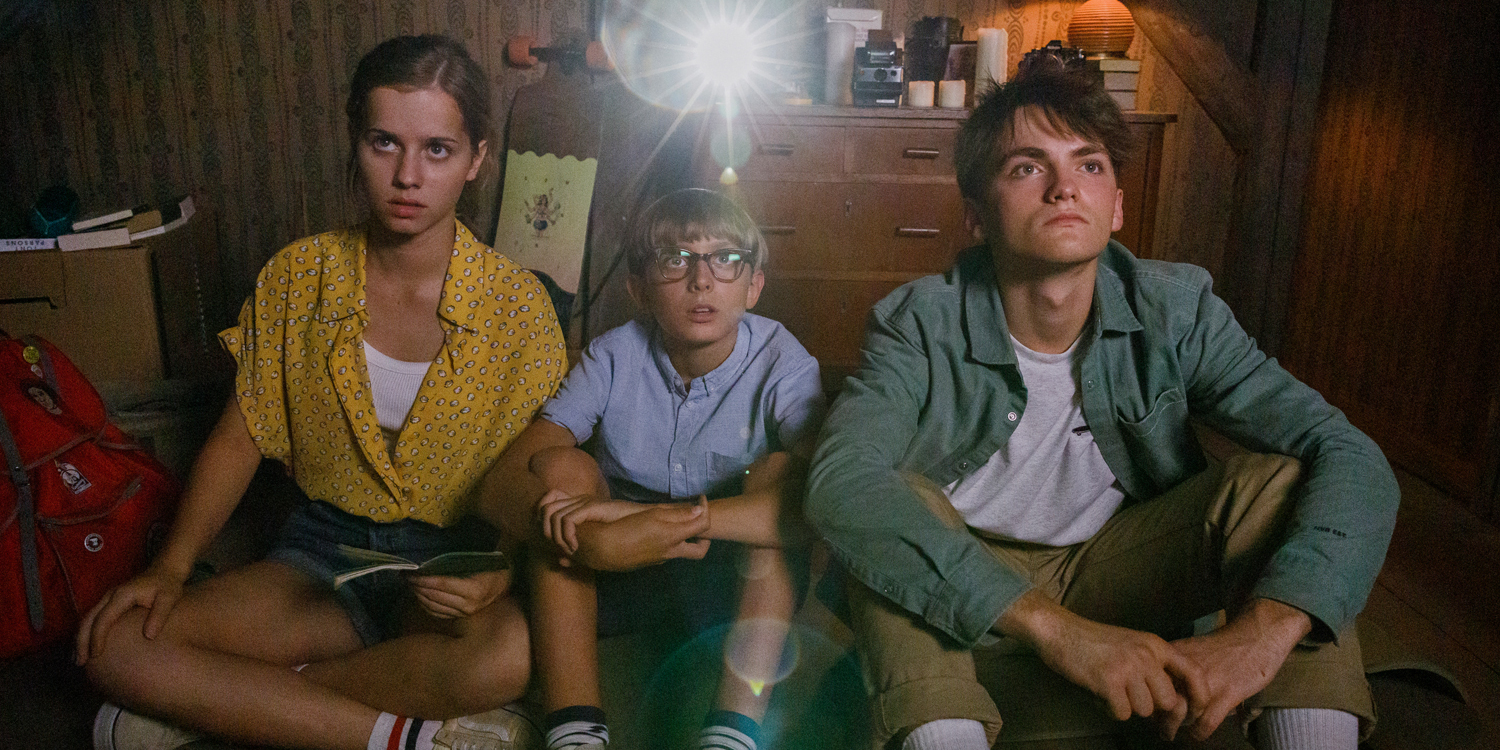 Some films do not try to be serious, and the lucidity makes them embrace cinema’s imaginative side more wholeheartedly. ‘The Strange House’ (German: ‘Das Schaurige Haus’), from the nascent oeuvre of Austrian filmmaker Daniel Prochaska, is a strange, quirky, and heartfelt horror comedy film that makes you smile more than it tries to scare you. In a happy marriage of distinct cinematic ideals of Dario Argento and Wes Anderson, the film tells the story of a big-city family who relocates to a small town. Unbeknownst to the family, the rundown house is haunted.

After being summoned by the poltergeists of the family that previously lived and died in the house, our adolescent protagonists embark upon a quest to find the killer, but the journey is fraught with perils. However, the evil forces are not strong enough to stop them, and they emerge victorious in the end. With the resolution of the mystery, a wronged family is delivered justice, and they now may rest in peace. The taut suspense of the story is gradually developed into a tense climax, and as the end credits roll, the tale leaves a lingering effect on the minds of the audience. If you are having a hard time comprehending the finality of the events, fret not. We have you covered! SPOILERS AHEAD.

The film begins with a family of three moving from a big German city to the small township of Eisenkappel. Single mother Sabine and her children Eddie and Hendrik are taken to their new house by the local caretaker Gerald Röckl. While on the tour of the house, Hendrik discovers a line of salt barring the entrance to the attic. Mr. Röckl says that there may be ghosts lurking in the house, but they don’t pay much heed to it. 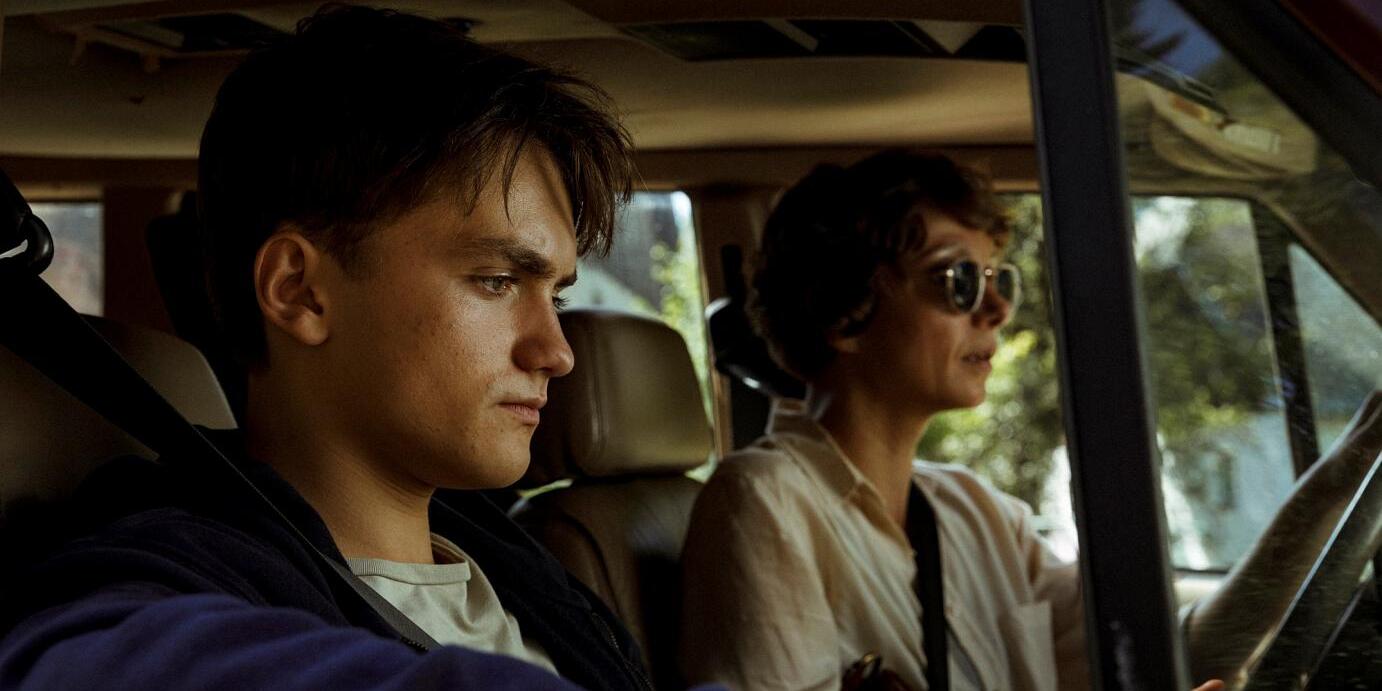 The house seems to have the classic haunted house look, and after messing with the line of salt, Eddie makes friends with an unearthly being called Nadja. And the next thing we know, Eddie is sleepwalking and writing stuff on the wall with hollow, possessed eyes. Later, Hendrik and Eddie take a tour of the sleepy town to find out that the place is more happening than he thinks it is. Although, Hendrik meets with intimidating stares from the local people. He meets a gangly and nerdy kid named Fritz, who introduces him to another local girl named Ida.

The house is indeed haunted by ghosts, as Fritz divulges. The property was once inhabited by Amalia Polzmann and her children Ralf and Roland Polzmann, and according to local news, Amalia was a psychopath who poisoned her children with mushrooms. Eddie writes the word “Gobe” on the wall, which means mushroom in Slovanian. (Maybe the Polzmanns were killed by the mushrooms, then). The four of them arrange a séance, which is visited by the ghost of Roland Polzmann in the body of Eddie.

A possessed Eddie leads them to the attic, where the team finds a book on mushrooms. The book conceals a tape and a diary, and the tape leads them to the revelation that Mr. Polzmann was in love with their devoted Christian neighbor Ms. Seelos, who once worked as a housekeeper for the Polzmann family. Maybe the deceased Polzmann kids are indicating the team to the actual killer. With deceptive evil lurking around the corner, will the three musketeers, Hendrik, Ida, and Fritz, be able to unearth the mystery and put the resentful souls at rest?

The Strange House Ending: Who Killed The Polzmann Family?

The story revolves around the death of the original owners of the titular house of the film, the Polzmann family. The apparitions of the Polzmann siblings present a mirror to Hendrik and Eddie. Past mirrors the present, albeit only in retrospect. When the present revisits the past and fills the blank spaces with meaning, it also severs its ties with the past. To find justice for the deceased family, the four lead characters seek to revisit the past.

While it is rumored that Amalia Polzmann poisoned her children, Ida has a hunch that maybe the story is fabricated. A possessed Eddie (by the ghost of Roland) writes “Gobe” on the wall, meaning “mushroom” in the Slovanian mother tongue of the Polzmann family, which gives us the sense that the ghosts are trying to communicate with the protagonists. After following the poltergeist of Roland, Hendrik discovers a book on mushrooms, and from the book, a videotape and a small diary. They see the film on the projector of Fritz while Ida recites from the diary.

Mr. Polzmann had a fling with the housekeeper Mrs. Seelos, whom Hendrik and the team know to be a senile, old woman who lives close to the house. They sense the involvement of Mrs. Seelos in the murder of the mother and the siblings and visit the old woman. But as Mrs. Seelos recounts, she left the job before the murders happened. Later in the story, Hendrik sees a mysterious woman in a mourning dress offering flowers to the graves of Ralf and Roland Polzmann.

Certain that this woman is the killer, Hendrik follows her in her car. Hendrik sneaks into the house of the woman to find love letters written by Mr. Polzmann to her. In the moment of revelation, the woman turns out to be Ms. Röckl, the second housekeeper of the Polzmann family who also had an affair with Mr. Polzmann. From the letters, Hendrik discovers that Ms. Röckl was pregnant with Mr. Polzmann’s child, and the son is none other than Gerald, the present caretaker of the house.

Is Hendrik Dead or Alive?

After the exposition, Hendrik and Ida are chased by Gerald in the bleak wilderness of the night into the Obir Cave. Ironically, the cave is also the subject of Sabine’s study, and it is the reason why the family has to move to the haunted house in the first place. In the end, then, everything comes full circle. But Hendrik and Ida venture deep into the cave, and they reach a tight corner. Gerald is just behind them. Ida’s feet slip at this juncture, and she falls into a lake at the bottom of the cave, taking Hendrik along with her. However, Hendrik’s feet get stuck between rocks, and sensing that nobody would come to rescue the pair from the depth of the cave, Gerald leaves.

Hendrik panics and gets emotional, while Ida assures him that there are ways to get out of the cave. With some support from Hendrik, Ida leaves the cave, promising Hendrik that she would bring help. Ida rushes to the police while Hendrik is almost submerged in water. The ghost of Ralf keeps him company, and thinking that he has failed in his endeavor, Hendrik apologizes. The scene cuts to outside the cave, where the police have arrested the Röckl mother and son. The situation is still tense as Hendrik’s mother and friends are praying for Hendrik, but the camera comes into focus, and Hendrik seems to be walking out of the cave. He is alive.

Do The Snails Mean Something?

The titular house of the film is situated in the middle of a jungle infested by slimy snails. Eddie picks up a snail from the side of the road at the beginning of the film, but Gerald Röckl is seemingly disgusted by the creature. Later, Gerald brings poison to kill the snails, but Sabine gets rid of that. While the presence of snails does not directly relate to the story, it gives the film an eerie appearance at the outset. However, if we probe deeper, the recurrent image of the snails holds a deeper meaning.

According to Ida, “Polz” also means snail in Slovanian, and therefore “Polzmann” would mean “Snail Man” (referring to Mr. Polzmann), which is perhaps a bit too far-fetched, according to the other members of the team. But as the story progresses, our protagonists find out about the illicit affairs of Mr. Polzmann. Snails, little sloth creatures living in the safety of their hard outer shell, often symbolize home and stability, which is what the story is all about. The infection of the region with snails also suggests a pervasive corruption of the symbolic structure of the house. With the series of revelations, we sense that the Polzmann family was not really a happy one, owing to Mr. Polzmann’s illicit affairs with the housekeepers. Therefore, the snails provide a premonition to the bitter, slimy truth that lies in the heart of the mystery of Polzmann murders.