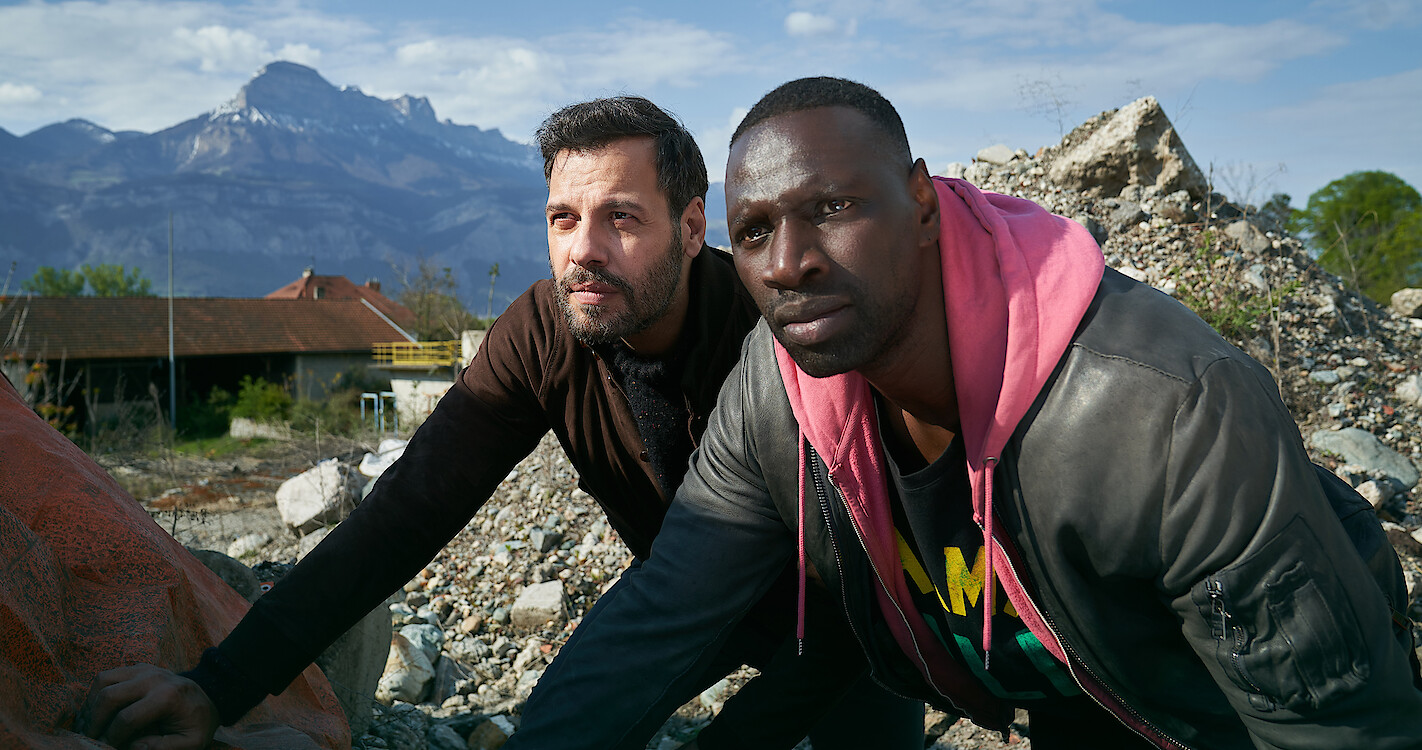 ‘The Takedown’ (French: ‘Loin du périph’) follows Paris crime division chief Ousmane Diakité (Omar Sy) and his longtime friend and former police partner, François Monge (Laurent Lafitte), on the trail of a grisly murder. The sequel to ‘On the Other Side of the Tracks’ (French: ‘De l’autre côté du périph’) once again sees Ousmane and François on a convoluted mission and this time, it takes them to the French countryside. An ominous town, a mysterious drug, and the gruesome murder of a young man all add up to make an entertaining caper. Things get pretty hairy near the end, so let’s take a closer look at ‘The Takedown’ climax and see what goes down. SPOILERS AHEAD.

The film opens with crime division chief Ousmane apprehending a brutish criminal after wrestling him into submission. His boss isn’t impressed by Ousman’s tactics, which result in viral videos of him fighting the criminal. However, the Paris police division needs some good PR, so the bulky, good-natured police chief is asked to be the new face of the police force. Ousmane declines and is soon called to the train station, where a gruesomely mutilated body has been discovered.

At the crime scene, Ousmane runs into his old partner, François. Despite the two having a falling out years ago, François insists on coming along with Ousmane, and the two head to French provinces near Saint-Julien-en-Genevois. Arriving in the small town, the two Paris police officials are picked up by Alice of the local police force. Ousmane takes an instant liking to Alice and flirts with her even as their investigation into the death of Kevin Marchal continues.

It is soon discovered that Kevin manufactured and sold drugs. A tough brawl with a former customer of Kevin’s also leads Ousmane to realize that Kevin’s drugs numb its consumer to pain. As the two police officers dig further, a connection to the town’s extremist right-wing mayor, Antoine Brunner, begins to emerge. Ousmane and François ultimately follow the politician to a secret meeting where the latter is planning a coordinated attack on mosques, shelter homes, and other locations that host minorities. François distracts the roaring crowd while Ousmane collects their guns and gets into a brief tussle with Alice, who turns out to be on the Mayor’s side.

The Takedown Ending: How Did Kevin Marchal Die? Who Killed Him?

An epic and chaotic battle ensues between the two police officers from Paris and the Mayor’s right-wing militia. Antoine tries to get away and makes it to an immigrant shelter prewired with explosives. He detonates the bomb but there are no casualties. Ultimately, Ousmane and François arrest the Mayor and reveal the conspiracy. Predictably, it is their boss that gets the credit. The film then closes with François as the new face of the Paris police PR campaign, which Ousmane quickly begins making fun of. The film ends with the two called to the top of the Eiffel Tower for their next case, where they promptly begin chasing after a suspect.

The death of 28-year-old Kevin Marchal sets off the mystery but is never completely solved. The top half of the young man’s body is found wedged on a train while the bottom half is found in the countryside. Ousmane subsequently figures out that Kevin was shot and then fell off a bridge wherein he got mutilated by the electric wires.

However, the identity of the shooter remains a mystery. Later, an incriminating gun is found in the locker of a recently killed nightclub bouncer named Carl Muller. For a time, it looks like the case is solved. However, Ousmane remains suspicious of the broader group, the Sons of Clovis, of which Carl was a member. The police chief reasons that the gun could have easily been placed in Carl’s locker. Ultimately, the person that shot Kevin is never found.

However, the shooter is most likely a member of the Sons of Clovis. Considering most of the group’s members — including its leader Antoine Brunner — are arrested, it is likely that Kevin’s killer is in custody. However, we cannot know for certain. Since Ousmane never bothers to make his alternate theory known to his superiors, Kevin’s killer is still Carl Muller according to official records.

What Happens to Alice? Is She Dead or Alive?

One of the big reveals at the end is that Ousmane’s love interest, Alice, is actually a sympathizer of the Mayor and is helping the Sons of Clovis. After a tussle with Ousmane, she is briefly handcuffed but manages to escape. She then helps Antoine escape but is severely injured in a subsequent car crash. In the end, Alice survives but is last seen in a neck brace, being taken to the hospital. It remains unspecified whether she is arrested or not. Considering she is caught trying to help the disgraced Mayor who is taken into custody, it is likely that Alice is also arrested after she recovers from her injuries.

Why Does François Have an Acting Job in the End?

François gets a fitting — if rather unexpected — gift at the end of the movie. As he watches his superior being interviewed on television about the events involving the Sons of Clovis, the police officer grumbles that the real people who do the work never get interviewed. In response, Ousmane seemingly puts forward François as the new face of the Paris police department’s PR campaign.

This is a gig initially offered to Ousmane himself, who turns it down because he thinks the police department basically wants a “friendly Black face” for their campaign. However, he is more than happy to pass on the spotlight to François. As a result, François becomes the (over) enthusiastic central actor of a largescale police recruitment campaign. He finally finds himself in front of the camera and, even though they are enacted, energetically takes part in multiple criminal apprehension scenarios.

Read More: What Happens to the Sons of Clovis in The Takedown? Is It a Real French Right-Wing Group?