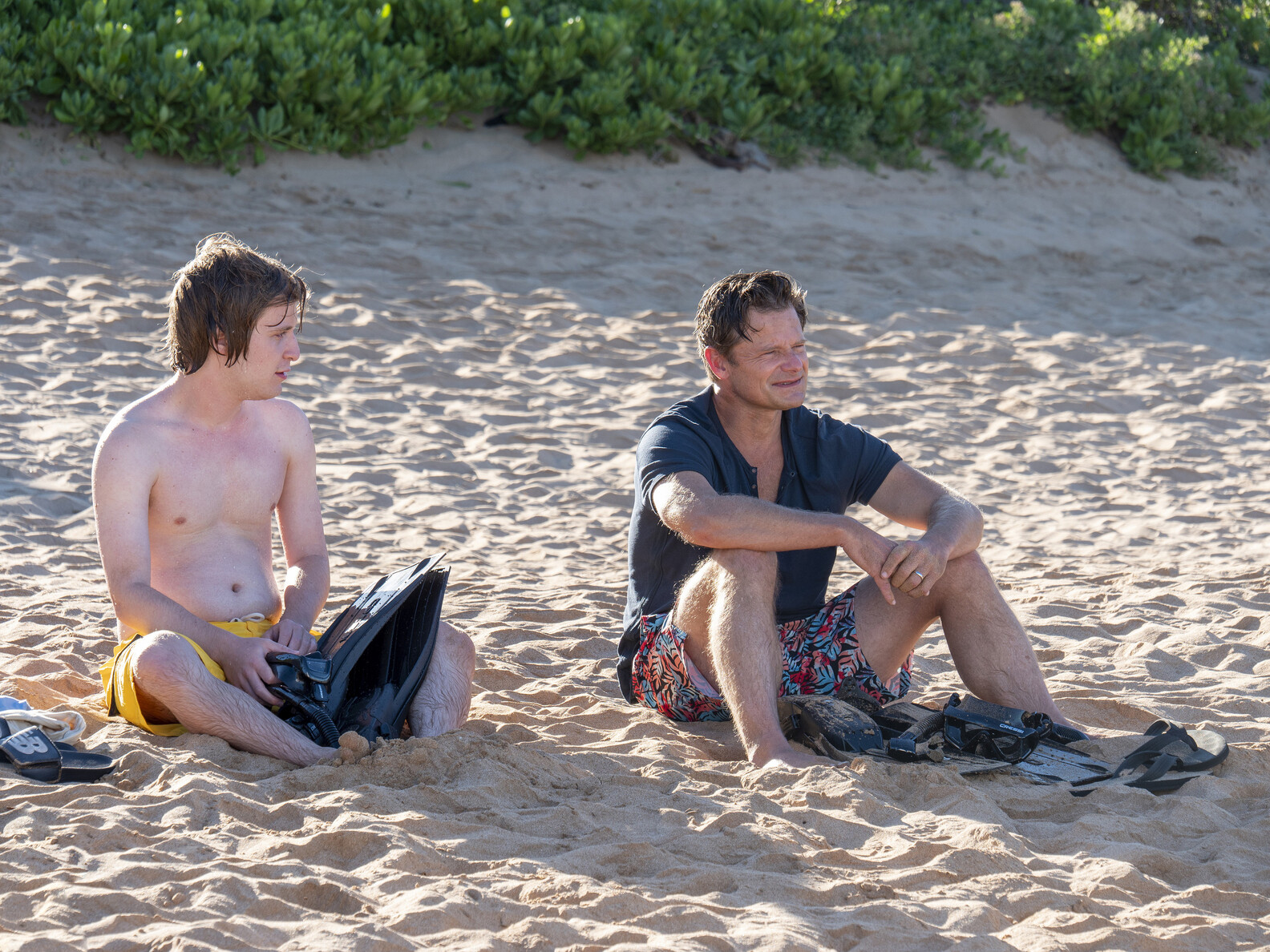 Mike White’s (‘Enlightened’) black comedy series ‘The White Lotus’ is a reservoir of comprehensive and biting satire. While it doesn’t pull its punches for any of its characters, it especially targets the affluent ones, enunciating the ridiculousness of what they prioritize and what they fear. The story is set in a tropical resort somewhere in Hawaii and revolves around newly-arrived vacationers and the staffers at the eponymous hotel. Here is everything you need to know about ‘The White Lotus’ episode 1 ending. SPOILERS AHEAD.

‘The White Lotus’ episode 1, titled ‘Arrivals,’ begins with a flashforward scene. One of the main characters of the limited series, Shane Patton (Jake Lacy), waits alone at the airport for a flight back to Honolulu. The audience learns from his brief conversation with an inquisitive older couple that he was staying at the White Lotus, where someone was killed, and the body will be traveling to Honolulu with the three of them. It is revealed that he came there for his honeymoon, but as the older couple observes, his wife isn’t there with him. Shane abruptly ends the conversation and watches as the body of the yet-to-be-revealed victim is loaded into the plane.

The plot then shifts back to one week earlier as the vacationers arrive at the island on a boat. Shane and Rachel (Alexandra Daddario) are newlyweds. Nicole (Connie Britton) and Mark Mossbacher (Steve Zahn) are there with their daughter Olivia (Sydney Sweeney), son Quinn (Fred Hechinger), and Olivia’s friend Paula (Brittany O’Grady). Tanya McQuoid (Jennifer Coolidge) has come to the island to immerse the ashes of her deceased mother into the ocean. The staff is led by the charming manager of the resort, Armond (Murray Bartlett), and includes Lani (Jolene Purdy), a recruit who goes into labor on the first day at her job, and spa manager Belinda (Natasha Rothwell).

Only 5 minutes into the pilot episode and you start to understand White’s intent behind this series. Each scene makes you incredibly uncomfortable, as they are supposed to. While many of these characters represent the upper tier of society, they soon become terrifyingly relatable with all their shortcomings, pettiness, and hypocrisies.

The White Lotus Episode 1 Ending: Who Is Dead? Why Are Shane and Armond Fighting?

‘The White Lotus’ starts by introducing the idea that one of the characters that the audience will soon meet was killed during their week-long stay at the White Lotus. Predictably, the show doesn’t reveal who this person is in its pilot episode and will likely use it as one of the main plot devices, along with the identity of the murderer and their reasons. But considering that the scene involves Shane and not any other character, the audience can probably make some guesses. It has to be one of the vacationers, as the deceased’s body is being flown to Honolulu. If the deceased were one of the staffers, then there wouldn’t have been any need for that.

Shane seems quite shell-shocked as he waits for the plane. The audience can glean that something happened on that island that led to Rachel not traveling back to New York with him. The two of them got married only after a few months of dating, and Rachel seems to be having some doubts about it. The episode builds up an antagonistic relationship between Shane and Armond, which will likely be further explored in the upcoming episodes. His parents paid for the vacation, and he discovers that the hotel has given them the wrong room.

He spends the entire day mulling over it, even confronting Armond several times, and overlooks his wife’s doubts and insecurities. While this spousal dispute might play a prominent role in the series, especially after the arrival of Shane’s mother Kitty (Molly Shannon), it just might not be why Rachel is absent. Instead, she might be the person who is dead, and the dispute between her and Shane has largely been used as a smokescreen to hide the real reasons for Shane’s demeanor and behavior in the flash-forward scene.

What is in Tanya’s Box? What Does Belinda Chant in Sanskrit?

Tanya is an odd combination of nonconformism and utter pessimism. It is clear that she had a troubling relationship with her mother. However, she is still at the White Lotus, taking that expensive vacation to immerse her mother’s ashes into the ocean. That’s what the box contains — her mother’s ashes — or at least, she claims it does. She knows that she can be extremely clingy, which apparently has driven off all the men from her life, but she still repeats that behavior after a session with Belinda, who chants the Gayatri Mantra and basically urges her to be happy with herself. In her mind, Tanya immediately develops a sense of dependency towards the other woman. She becomes deflated as Belinda ignores her while rushing to help Lani, who is having a baby.

What Is Bothering Mark?

Mark and Nicole have been married for several years, and their relationship seems to have reached that stage where there is less love and more exasperation at each other’s actions. Following a scene that involves Zahn’s full-frontal nudity, the audience is told that Mark is afraid that he has testicular cancer. He has undergone the necessary tests, but the results are yet to arrive. On his wife’s suggestion, he spends the first day of their vacation attempting to connect with his son. However, all he ends up doing is making Quinn uncomfortable with always thinking about the disease he believes he has.