TIFF Review: ‘Black Mass’ is a Johny Depp Show From Start to Finish 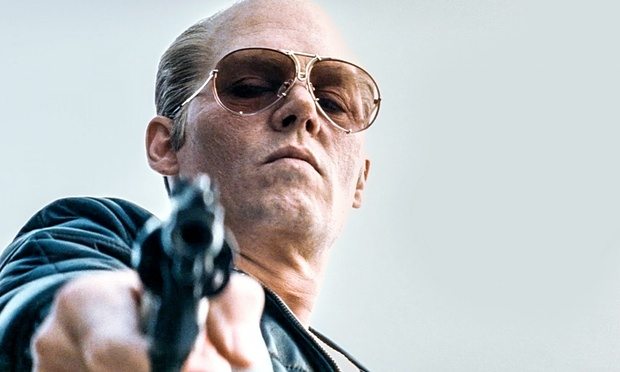 Many were anticipating ‘Black Mass’ with baited breath because the trailers showed a nearly unrecognizable Johnny Depp looking terrifyingly fierce. They hoped that Depp finally is trying something different than the “paycheck” roles he has been doing for the past few years. ‘Black Mass’ may not be a comeback film for Depp, but then, in a certain way it nearly is. When was the last time you saw Depp in a role where he is not the Johnny Depp, the movie star, but Johnny Depp, the actor ? And lest people forget, ‘Black Mass’ is a timely reminder that Depp is an equally brilliant actor as big he is a movie star.

Depp has been exceptional before, but in ‘Black Mass’, he goes beyond anything he has ever done, creating a character who is the personification of absolute evil, a deadly sociopath who manipulates anyone and everyone to climb to the top of his crime empire in Boston. You look into those eyes, pale blue and see no life, only death, and the constant threat of violence, or worse. Looking at him you actually believe death would be better than having to deal with him. It is a subtle performance done with alarmingly intensity that reeks fear and fierceness.

‘Black Mass’ is based in 1970s South Boston, when FBI Agent John Connolly (Joel Edgerton) persuades Irish mobster James “Whitey” Bulger (Johnny Depp) to collaborate with the FBI and eliminate a common enemy: the Italian mob. The drama tells the story of this unholy alliance, which spiraled out of control, allowing Whitey to evade law enforcement, consolidate power, and become one of the most ruthless and powerful gangsters in Boston history. Basically, FBI did not realize was that he was using them to consolidate his own power.

While watching the film one becomes aware that Depp resembles a younger Jack Nicholson, which is ironic because Nicholson used Bulger as the model for his Costello in The Departed (2006). And while he is made up as he has often been through his career, masking those movie star good looks, we never really notice the make up because the character feels so authentic and the actor pulls us on so quickly.

Director Scott Cooper does a good job considering the film covers ground we have been before in such films as Goodfellas (1990), Casino (1995) and The Departed (2006). It feels like a quieter film, in comparison, perhaps because he places the film on Depp’s shoulders and the actor never steps over the line with his brilliant performance. The supporting cast is excellent, particularly Joel Edgerton as the man who brings Bulger into the circle, and Benedict Cumberbatch as Bulger’s good guy brother.

Overall, ‘Black Mass’ may not be the best crime drama that you will ever see, but it deserves a watch simply to witness the terrific performance of Johny Depp, who in all likelihood is looking at a well-deserved Oscar nomination.