10 Tips on How to Watch Movies in Theaters 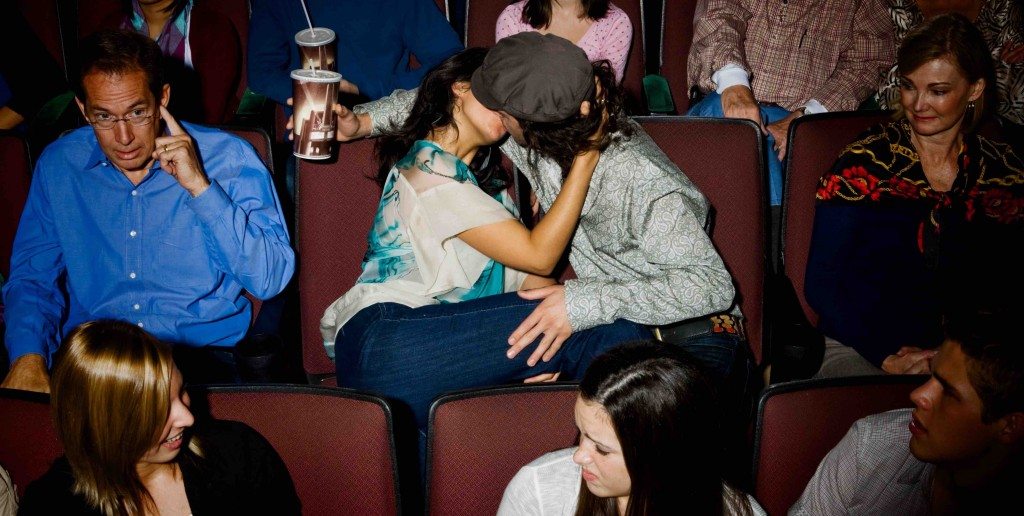 Going to the movies is one of the most popular activities around the world. The ever rising chains of multiplexes are constantly striving to give us the best state of the art facilities to improve our viewing experience. The ticket prices are surging but hardly anyone is complaining. Watching a beautiful movie with our friends or family is enough to make all our worries go away for a definite period of time. However this supposedly fun activity can turn into a nightmare if certain things are not kept in check. Here is a list of 10 things to remember whenever you watch movies in a theater.

1. Keep your Phone off 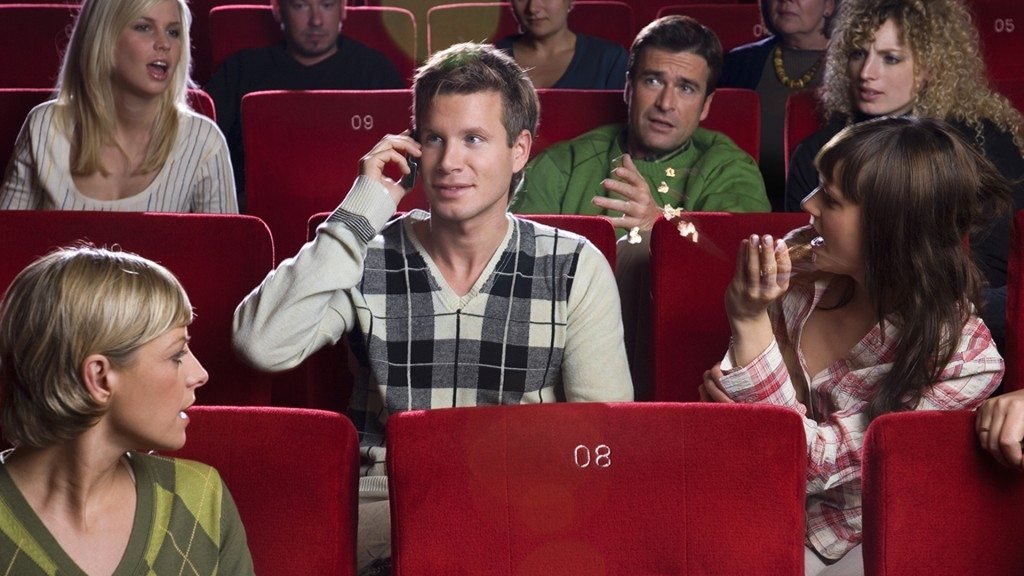 It is a prerequisite to keep your phone off or in a silent mode as per your convenience. There is nothing more annoying than a phone going off in the middle of a movie and if it is accompanied by a ridiculous ring tone then only the lord can save us. Don’t keep checking your messages regularly on your phone as its beam is pretty distracting to the person sitting next to you. Some of us are busy beings but we can all afford to give a neat two to three hours to ourselves. What’s the purpose of living otherwise? If it’s an emergency call one can always go out of the theatre and talk as the rest of the world don’t need to get involved in your personal issues.

2. Stretch Your Legs According to the Size of Your Seat 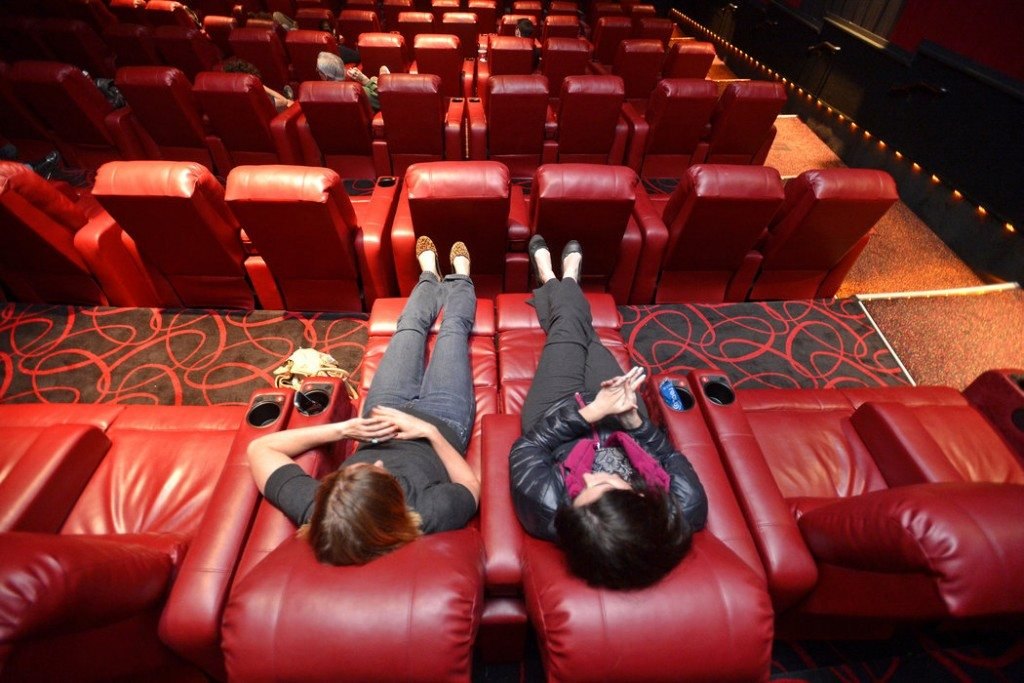 I know sometimes it can be tiresome to sit in one particular position for a long duration of time but that doesn’t give you the license to experiment with your sitting positions while you are watching a movie with hundreds of other people. Movie going is a social activity so you need to follow some rules and maintain decorum. Sit in a way which works for you as well as for those sitting near you. Make sure that your leg doesn’t touch the head of the sit ahead of you. 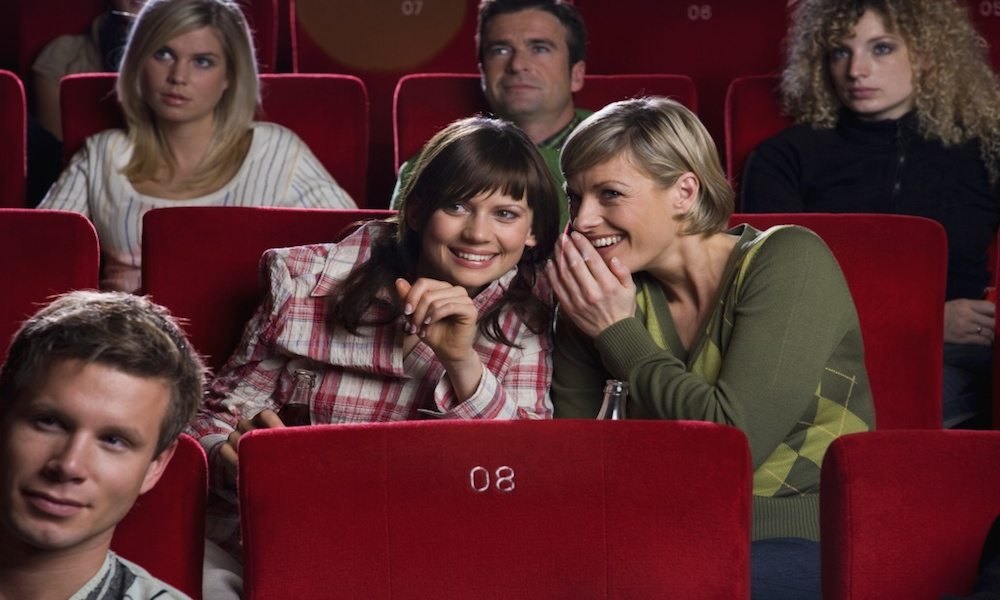 It is like an unsaid rule that you have to maintain silence once the movie is on. People don’t appreciate small talks inside a theatre whether it is related to the film you are watching or not. Watching movies with your group of friends can be a fun experience but you don’t have to make it an unpleasant experience for others with your constant comments, trivia and anecdotes. Also a movie house is not the ideal place for a get together or a reunion of some sorts with your old buddies. 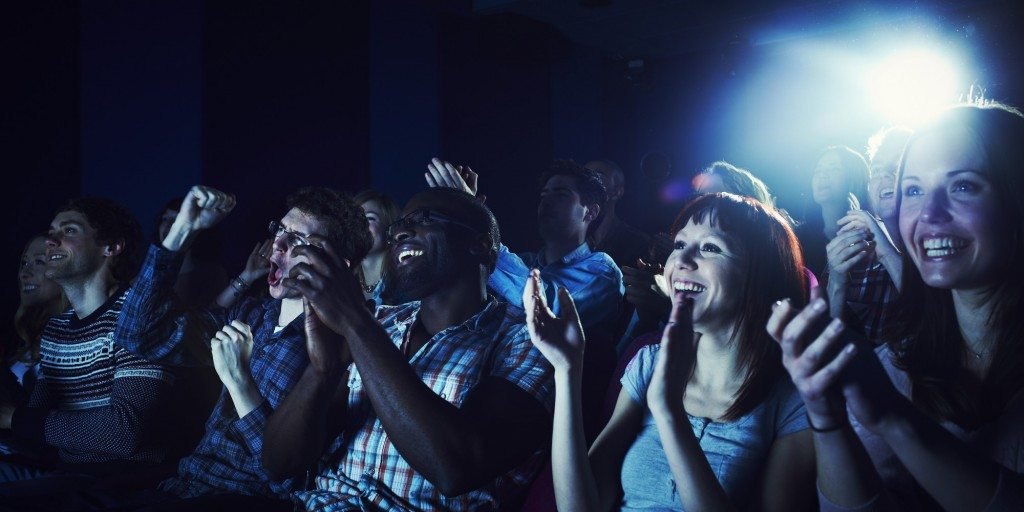 We all go the movies to get entertained and forget our worries but it doesn’t mean we have to let go of our restraints and go overboard in expressing our emotions. It’s completely ok to laugh when the situation calls for it or even weep a little at the tragedy befalling upon your favourite stars, as long as it is done in a subtle manner. Don’t start clapping, hooting or whistling if a particular scene impresses you or disgusts you. Making vulgar noises when a love-making scene comes on or dancing along to the tunes of an item number/songs should be avoided at any cost if you don’t want to be booked for public display of indecent behavior.

5. Leave Your Kids at Home 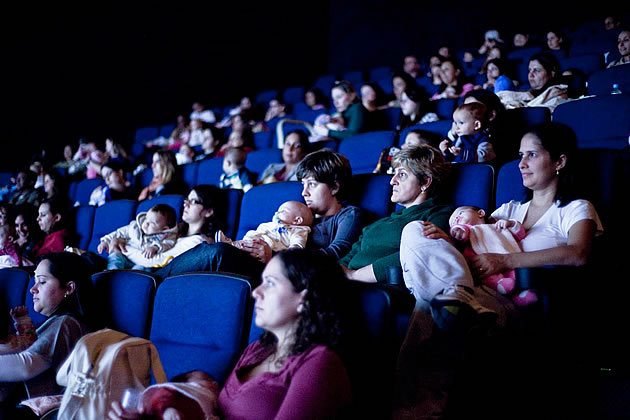 I know this sounds a bit rude, especially to young parents but truth be said a cinema theatre is no place for a toddler simply because a child has no desire of watching a film to begin with. With their constant crying due to feeling uneasy in a new environment breaks the concentration of the audience in a big way. The worst part is you cannot even ask them to leave or advice otherwise on account of politeness and also because theatre owners have no such rule that prohibits toddlers from watching a movie. So my advice would be to all the parents out there would be to take one for the team and leave their kids at home voluntarily. 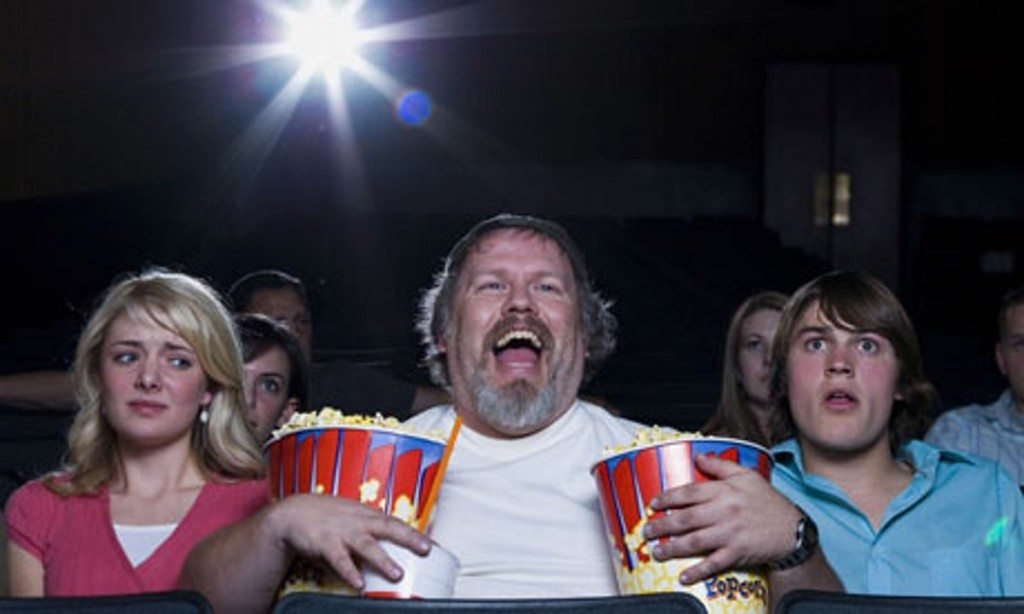 We encounter varieties of bullies on our regular trip to the movies; both passive and active ones. There are a few who are always in a hurry to go in before everyone else. They find it difficult to even scoot so that others can move around freely in a largely congested theatre. Some constantly keep hitting/kicking on the back of your seats knowingly or unknowingly. If you ever had the glorious experience of watching a film in a single screen theatres in shady towns then you my friend have seen a lot in your life. There you will meet chaps who are ever ready to pick up a fight with you at the drop of a hat. You will find smokers, drunks and others of their ilk who will make sure that your movie experience is nothing short of hell. There are exceptions though.

7. Don’t Ruin It For Others 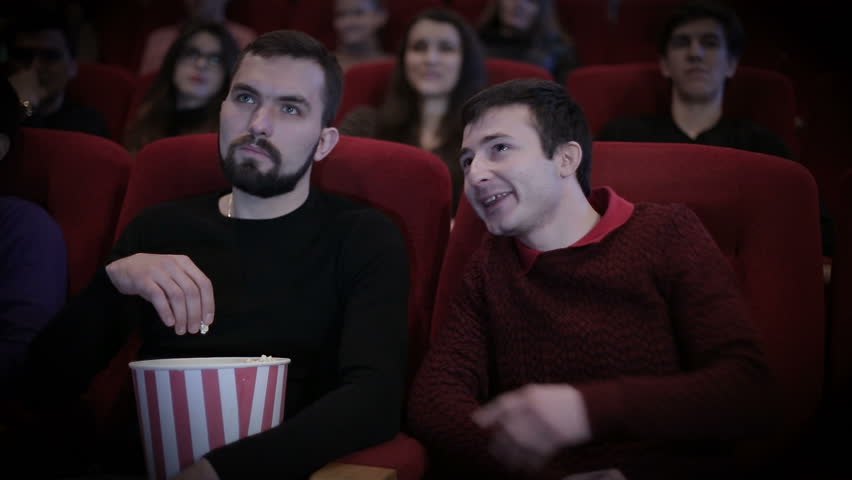 Some of you go for a movie multiple times if you like to happen it very much or you tag along with a friend for a repeat viewing who offers to pay for your ticket. Most of us have this habit of passing live commentary during a movie as to what will happen in the next scene. This act should be regarded as a criminal offense. I mean seriously just because you know what will happen next you don’t have to kill the suspense for others who are watching it for the first time. There’s no point in watching a movie if you already know the outcome. In the internet age a new trend has come up which is reading the review of a movie beforehand and spoiling the fun for the rest by revealing the verdict. It is advisable to avoid reading reviews or checking the IMDB rating when you have already booked the tickets. Watch it for yourself and judge by your own taste because the critics don’t always get it right.

8. Avoid PDA Inside a Theatre 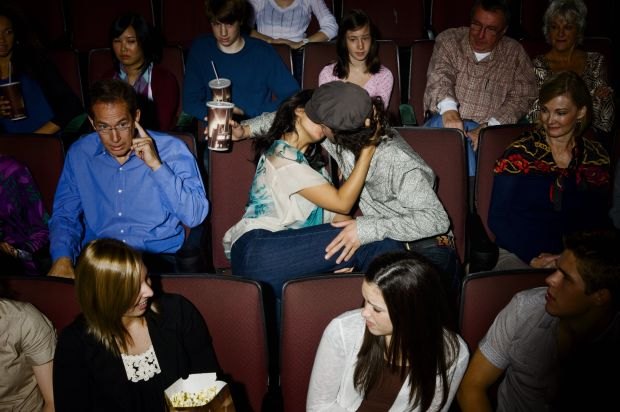 Why aren’t there any laws yet to stop PDA inside a theatre? There is nothing more annoying than a lovey-dovey couple who books the corner seats and start making out whenever they get a chance, much to the embarrassment of those seating nearby. If you are one of those high on love couples then please get a room and FYI a dark theatre doesn’t qualify as a room. 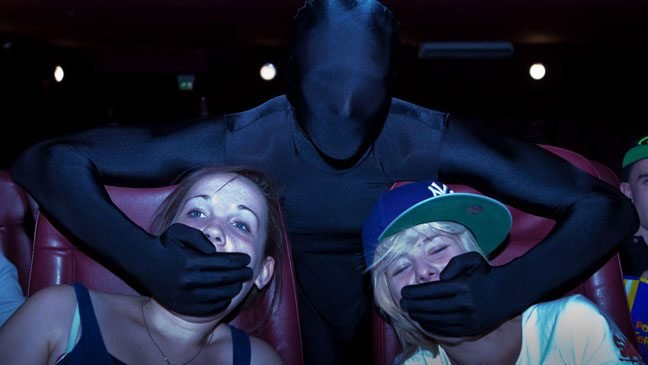 Have you ever encountered fellow viewers in a theatre who have expert opinions on everything? Midway through a film such people mostly to show off will start commenting on the lack of a good story-line or the poor performances of the actors much to the dismay of everyone around them. It is one thing to be able to watch a movie in an intelligent manner but another to express your opinions at the wrong place. To make things worse some people starts yawning and shouting to show their displeasure towards a movie. People should avoid doing such things ASAP because someone else might be actually enjoying the movie.

If you have seen the cult spoof/slasher flick ‘Scary Movie’ then you are definitely aware of a loudmouth character called ‘Brenda Meeks’. In the first installment of the series she goes to watch a movie – ‘Shakespeare in Love’ – with her boyfriend. Her behavior inside the theatre can inspire an enthusiastic journalist to write a book on ‘What Not to do inside a Movie Theatre?’ Her character is a downright bully asking everyone one to keep it down while she is the one blabbering on and on. She brings in food from outside, talks on her phone and reveal what happens in the end. So if my words are not going to make a better person of you then the tragic death of her character in the film might. Have a great time at the movies!