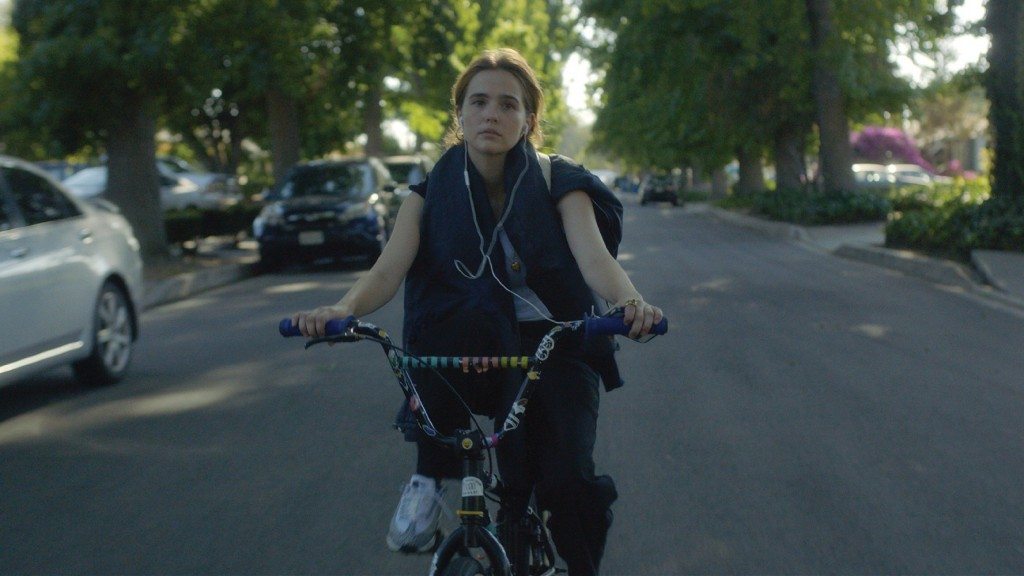 Zoey Deutch has been on the rise for the past few years, shining in movies like Richard Linklater’s “Everybody Wants Some!!” and elevating forgettable comedies like “Why Him?” or “Dirty Grandpa.” Her latest, director Max Winkler’s “Flower,” is a movie that makes another play to catapult Deutch into full-fledge movie stardom. Seeing movie after movie, writing about some of the same old things done slightly different, it’s always exciting to see a star hatch before our very eyes.

Here, Deutch is no longer the cute, bubbly, bright-eyed romantic conquest. She is the star, front and center, commanding and unapologetic. She stars as Erica, a free-spirited young women with a strong sexual appetite. The movie opens with her performing oral sex on a cop. “How did you learn to give a hummer like that?” he asks her. “Middle school,” she snaps back. Erica’s acidic wit is beyond her years.

Erica isn’t just promiscuous for promiscuity sake; everything she does is in service of her personal agenda. She blackmails those she entertains, collecting money to bail her father out of jail, who is serving time for “being awesome in a casino,” as she puts it. Others happened to see it as robbery. She currently lives her mother (Kathryn Hahn), who is more often like a best friend than a mother, and her boyfriend, Bob (Tim Heidecker), someone Erica doesn’t approve of because he’s just a little too lame.

Bob’s presence doesn’t fit into Erica’s world. She isn’t used to having to share her space with anyone but her mother, so when Bob’s son Luke (Joey Morgan), moves in after leaving rehab, Erica isn’t pleased. Luke is shy and uncomfortable, trying to readjust to a world where he was never truly comfortable. Despite an initial pushback to the idea of another body in the house, Erica forms a bond with Luke, along with her two friends Kala (Dylan Gelula) and Claudine (Maya Eshet). They are brought together by Will (Adam Scott), who the trio have been ogling at a local bowling alley, referring to him as “Hot Old Guy.”

Winkler, along with writers Alex McAulay and Matt Spicer, keep the 90-minute film moving at snappy pace, weaving together the comedy, drama and thrills evenly, never shifting tones abruptly. “Flower” isn’t afraid to go dark – and sometimes uncomfortably so – but it’s all done so delicately and effectively.

‘Flower’ often plays like ‘Juno’ with venom running through its veins but for all its treasures, the movie’s gold medal lies with Deutch. There is vulnerability within Erica that’s more obvious than she suspects, as she parades around with her why the hell not? attitude and Deutch is believable at every step.

If the right people see “Flower,” Deutch’s days as the romantic lead should be behind her. Erica is a challenging role and Deutch’s performance is one of the best things to come out this year’s Tribeca Film Festival.