Trigger Point Ending, Explained: Who Is the Bomber? 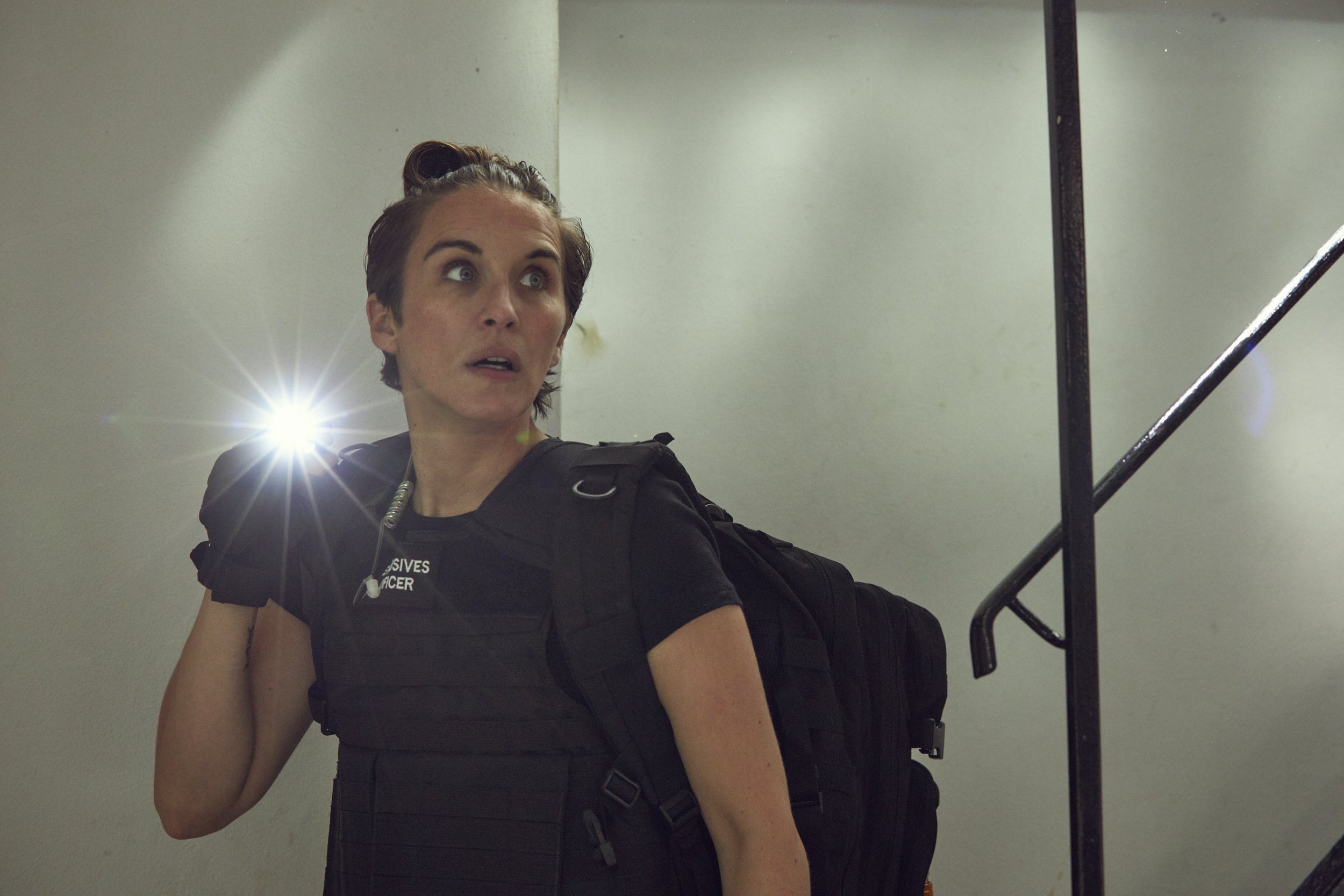 Developed by debutant creator Daniel Brierley, ‘Trigger Point’ is a roller coaster ride of action and suspense. It follows Metropolitan Police bomb squad officer Lana “Wash” Washington (Vicky McClure) while a series of explosions sends London into turmoil. Lana loses her boss and friend Joel Nutkins in the first explosion, making her determined to find the perpetrators. As the investigation reveals the possible involvement of a far-right group, it sets the residents of one of the world’s most culturally and racially diverse cities on edge. Complicating the matter further is an upcoming election where a far-right candidate is set to take on her Progressive Alliance opponent hailing from a religious minority background. Here is everything you need to know about the ending of ‘Trigger Point’ season 1. SPOILERS AHEAD.

‘Trigger Point’ episode 1 begins as a situation unfolds in the Westhaven Estate, a housing area in London. Lana and Nutkins arrive at the scene. They have been called after the police have received intel that there is a bomb factory in one of the Westhaven apartments. The apartment in question belongs to a man named Andy Phelan. Lana, Nutkins, and Counter Terrorist Specialist Firearms Officer Lee Robins find Phelan’s wife and daughter. The wife tells the officers that a group of people broke into her home and held her daughter at gunpoint to force her to make a call to the authorities and tell them that there was a bomb factory in the apartment.

While inspecting the apartment, Lana finds the number 1912 written on the wall. Although the bomb squad finds an explosive device in the apartment, as it is later revealed, it only had black powder as the charge. Andy Phelan is located in the trunk of his car wearing an explosive vest, but Lana and Nutkins successfully get it off him. Just as it seems everything will be alright, a van explodes, killing Nutkins and several others.

In episode 2, the investigation begins with Lana’s boyfriend, DI Thom Youngblood (Mark Stanley), serving as a key component of it. Initially, the authorities suspect that this was done by a radical Islamic outfit as Phelan’s wife claimed that she heard Arabic during the break-in. However, the police later start suspecting that a far-right group might be involved. Their suspicion is all but confirmed after an attack on a mosque, which kills one individual.

A group calling themselves the Crusaders claims responsibility for the attack on the mosque in response to what happened at Westhaven. After an explosive device is found inside a black van parked outside a venue hosting an LGBT event in episode 3, the police deduce that the Crusaders are behind all three incidents. Moreover, the police get attacked during the most recent one, and a CTSFO is killed, but his colleagues manage to bring down Nick Roberts, the suspected bomber of the mosque. When the body of the slain CTSFO is discovered, Thom and the others realize the mastermind behind all these attacks has managed to escape. And as Lana points out, Robert wasn’t an explosive expert, so more similar incidents will likely continue to happen,

She is proven right as the series progresses. In one such incident, Lana’s own brother, Billy, is killed after becoming involved with far-right ideologues. After realizing that the bomber must be a professional or has a military background, Lana begins suspecting her colleague John Hudson, who harbors far-right, Islamophobic beliefs and thinks that he should have been made senior Expo after Nutkins’ death instead of Lana.

While all this is happening, Lana grows close to a man named Karl Maguire (Warren Brown), whom she encounters after Nutkins’ funeral. In the season finale, the by-election to choose the next MP for the Deptford South Constituency heats up. Meanwhile, the authorities search for Hudson after he goes on the run when a call from his phone detonates an explosive device inside the University of South London. After Thom discovers that Lana has cheated on him, he ends their relationship. Later, Lana breaks up with Karl, telling him that she isn’t in the right frame of mind to date anyone since her brother’s death.

Trigger Point Season 1 Ending: Who Is the Bomber?

As the season finale reveals, Karl Maguire is the real bomber. He orchestrated the entire thing. The far-right group known as the Crusaders doesn’t really exist. This was never really about far-right ideology, though  Ayesha Campbell-Khan, the Labour candidate representing the Progressive Alliance in the MP by-election for the Deptford South Constituency, was always the main target. The revelation comes in stages both for Lana and the audience.

With the help of Sonya Reeves (Kerry Godliman), Lana figures out the mystery behind the two numbers previously mentioned in the series — 1912 and 661142. Lana discovers the former in the apartment belonging to the Phelans, the latter is first found on a classified file on the explosive used in all the bombings, HMX-319. Later, Hudson apparently messages that number to Lana. Both numbers are codes made out of positions of various elements on the Periodic Table. 66 11 42 indicates Dysprosium (Dy), Sodium (Na), and Molybdenum (Mo), spelling out Dynamo, the name of a secret operation that the British Army undertook in 2009 in Afghanistan. 19 12 indicates Potassium (K) and Magnesium (Mg), which refers to the initials of Karl Maguire.

Karl is former military and was part of Operation Dynamo, where seven of his fellow soldiers lost their lives. Karl subsequently devoted his life to getting them justice, but all his attempts to do so through legal means failed. This ultimately led him to choose the violent path. His primary target, Ayesha Campbell-Khan, shut down the inquiry into Operation Dynamo as the heading of the Defence select committee to maintain public faith in England’s mission overseas.

Although Karl believes that far-right ideology is vile, he used Robert and another racist ideologue, Frank Welsh, to divert the attention of the police. He also used Hudson for the same reason and to keep Lana away from the Deptford Assembly Halls, where he takes Ayesha hostage and is eventually killed.

What Is Operation Dynamo?

In July 2009, Karl and seven other soldiers were tasked to deliver HMX-319 to a special forces forward operating base in Afghanistan. This was the Operation Dynamo. Their convoy hit a roadside IED outside a village. An RPG took out the truck carrying the explosives, and the blast destroyed the village school. The soldiers were already under fire. After the explosion, the villagers came at them as well. Karl fled from the scene, but his comrades were not so lucky. They all perished in the conflict. When Karl eventually turned up at the forward operating base, the Ministry of Defense stuck him in a hospital wing for three months as they tried to figure out what to do with him. When Karl threatened to go public, they court-martialled him.

Is John Hudson Involved in the Bombings?

Although Hudson is as big a racist as Robert and Welsh, he isn’t involved in the bombings. Toward the end of the season, it is revealed that Karl manipulated John into calling a number that triggered the explosive device in the university auditorium. Karl was also the one who sent Lana the messages regarding 661142. Earlier in the series, he carefully turned Lana’s attention to Hudson when he told her that he saw Hudson with Billy. For a long time, Lana thought Hudson was grooming Billy when it was actually Robert.

Read More: Is Trigger Point Based on a True Story?