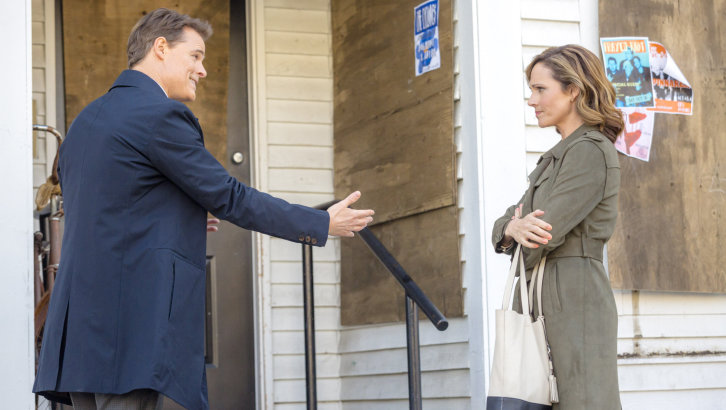 Professional partnerships can often become more than that. After all, a person spends most of their time at work. One is bound to make long-lasting connections. That is exactly the kind of dynamic that Hallmark’s ‘Truly, Madly, Sweetly’ is all about. The movie is one that is sure to bring out a smile on viewers’ faces. The film carries with it the characteristic Hallmark charm, making it even more appealing.

Speaking of the Hallmark charm, the network is known for being the king of romance on TV. That crown is not going anywhere with movies like ‘Truly, Madly, Sweetly.’ Hallmark is known for cheering up viewers with a constant stream of uplifting titles that can be enjoyed from the comfort of one’s couch.

‘Truly, Madly, Sweetly’ revolves around a food truck owner named Natalie and an opportunity that she gets. She runs her business in San Francisco and one of her regular customers passes away. The late customer’s nephew is a divorced man named Eric who is a finance manager. Natalie’s and Eric’s lives get intertwined after the death. Eric’s aunt leaves him and Natalie possession of a building that used to house a famous bakery in the past. However, the building cannot be sold since its a historical site. Thus, they decide to renovate the old bakery and start a business! In the process, the two end up getting close to each other. Will sparks fly between the two? Or will their closeness be temporary? There is only one way to find out.

‘Truly, Madly, Sweetly’ is a story that is set in San Francisco. The San Francisco setting is quite integral to the plot. Hence, it is natural for viewers to wonder whether the movie was actually filmed in the Californian city. Or was some other city used to double up as San Francisco?

Well, filming for ‘Truly, Madly, Sweetly’ was not actually carried out in the city of San Francisco. Instead, the movie was filmed in Canada. In fact, most Hallmark movies are filmed in Canada. This is mostly done for financial reasons as Canada offers lucrative tax credits for productions that opt to film in the country. This helps reduce filming costs as well as diversify the nation’s local economy. Here is a post that proves the fact that the movie was filmed in Abbotsford, which is a suburban city close to Vancouver. Have a look at the hashtags:

Here is another behind-the-scenes photo:

Some other filming locations used in the movie include Bella Vita Restaurant on Lougheed Highway, Clayburn Village in Abbotsford, and  Champagne & Lace on South Fraser Way (Abbotsford),

Truly, Madly, Sweetly Cast: Who is in it?

Several viewers would have wondered who the cast members of ‘Truly, Madly, Sweetly’ are. Well, the cast is led by Nikki Deloach. She plays the character of Natalie. Some of the other projects that she has been a part of include ‘Love & Other Drugs,’ ‘The House Bunny,’ and ‘Longshot.’ The actor who plays Eric, on the other hand, is Dylan Neal. Other cast members include Karen Holness, Matt Hamilton, Bailey Skodje, and Justine Warrington.