‘Truth Be Told’ is a mystery drama series on Apple TV+ that centers around a decades-old murder. Originally thought to be the doing of a 16-year old neighbor’s kid, the revelation of new evidence prompts journalist and podcaster Poppy Parnell to once again dig into the case when she begins to suspect that the man who has been in prison for 19 years might just be innocent.

Her search for the truth takes her on a long and complicated journey laden with secrets and moral dilemmas, so much so that the journalist’s own life begins to fall apart. The revelations at the end are startling, and the path to get to them, even more so. Let’s take another look at what happens in ‘Truth Be Told’ season 1 and how the mystery concludes. SPOILERS AHEAD.

Season 1 opens with the murder of accomplished author and professor Chuck Buhrman, whose wife Erin and two daughters Lanie and Josie find him stabbed to death in their home after a Halloween party. 16-year old Warren Cave, the son of a neighbor couple, is seen jumping over their hedge by Lanie, and once his fingerprints are found in the Buhrman house, his fate is sealed.

Portrayed to be a heartless murderer in the press (predominantly through articles by Poppy, who is just starting out as a journalist,) young Warren is tried as an adult and finds himself locked in prison for life by the time he is 17. However, 19 years on, Poppy watches Lanie’s testimony on tape and begins to suspect that the young girl was lying. The fact that the murder weapon was never recovered further pushes her to reexamine the case. 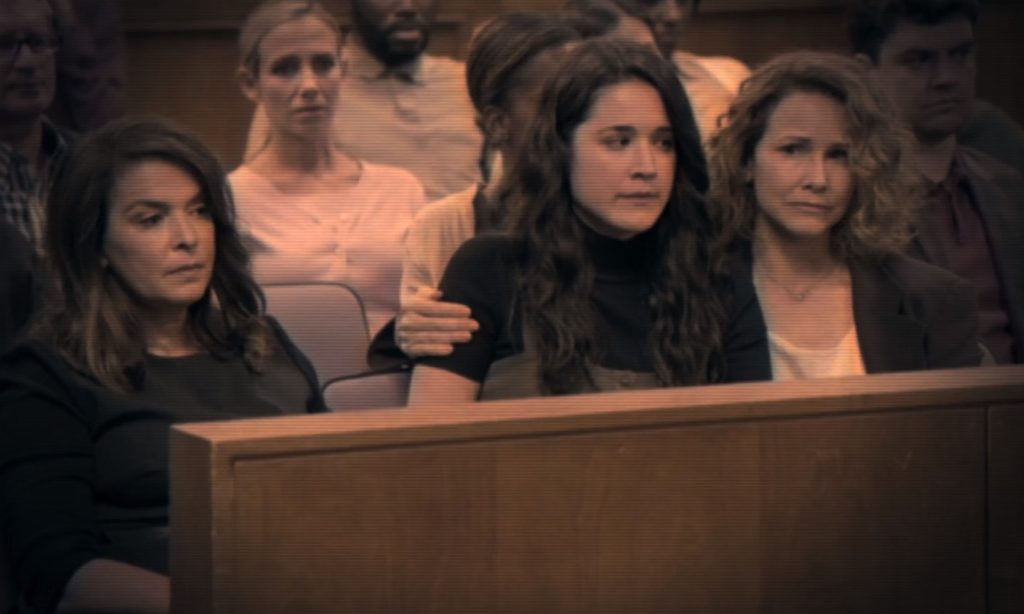 After approaching Warren and his mother Melanie, who is in the late stages of terminal cancer, Poppy initiates a podcast series to share her investigation. We also find that she is largely driven by her guilt of portraying Warren as a monster in her articles all those years ago, a feeling which is complicated further when she learns that he is now a Nazi. However, she decides to continue her investigation and is then approached by Warren’s father, Owen, who asks her not to re-open old wounds.

As she digs further, Poppy realizes that Owen’s own alibi is weak and that his wife was having an affair with the victim. She announces as such on her podcast, resulting in Owen getting suspended from his post as the Chief of Police and his wife leaving him. It is finally revealed that it was not Owen who was behind Chuck’s murder, but by then, it is too late, and the grieving man breaks into Poppy’s home and commits suicide in front of her.

Poppy’s suspicions briefly fall back on Warren. However, when it is discovered through Lanie’s childhood diary that she was regularly molested by her father, the suspicion then falls on her mother, Chuck’s wife — Erin, who is thought to have killed her husband to protect her daughter. The widow’s alibi is also found to be weak, and Poppy finally convinces her to appear on the podcast and reveal the truth to all the listeners.

However, before she can, Erin is killed by her daughter Lanie who doses her with Fentanyl. Soon after, Lanie is fired from her job as an end-of-life caregiver for inappropriate behavior and stealing her client’s drugs, making it all the more clear that she gave her mother the fatal dose. Her psychiatric records from the time, apart from diagnosing her with psychosis and an unhealthy obsession with her sister, also show that her counselor suspected Lanie of lying about being molested to cause a rift between her sister Josie and their father.

Truth Be Told Season 1 Ending: Who Killed Chuck Buhrman? What Happens to Lanie and Josie?

Poppy approaches Josie and warns her of her twin sister, who is suspected of killing both their parents. Being the timid one of the two, Josie agrees to help Poppy look for the elusive murder weapon and takes her to a spot she remembers seeing Lanie bury a dead bird as a child. There, they discover a silver sculpture of a bird covered in blood. As she looks at it, memories come flooding back into Josie’s mind, and she realizes that it was her (Josie) that killed her father to save her sister from being molested. She tells Poppy as such, and we then see Lanie and Josie go to the authorities and pin the blame on their mother. Lanie admits to lying in her testimony all those years ago, and Warren is finally released.

Season 1 closes with Josie and Lanie meeting at a cafe where they reminisce about their childhood and how Lanie has always been exceedingly attached to Josie. The former seems overjoyed at being reunited with her sister but is shocked when the police show up and arrest her for her mother’s murder. We then see Poppy recording the final episode of her podcast, which she closes on a thoughtful note, remarking on what a life-changing journey it has been for all those involved.

We, therefore, get closure on the serpentine mystery of Chuck’s murder and are made privy to a host of dark secrets along the way. The show masterfully paints multiple suspects one after the other, who each have compelling motives to commit the crime, and like most great murder mysteries, ends with an unlikely character being the actual killer. Josie, the timid one of the two twins, is finally revealed to be the murderer of her father, Chuck Buhrman. From how she reacts when she digs up the murder weapon (the silver bird sculpture), it seems like Josie herself had blocked out the memory all these years, which came rushing back when she held the bloodstained sculpture in her hands again.

Despite Josie confessing, Poppy cannot bring herself to reveal the same to the public. This is because Josie is also a victim of her circumstances and killed her father, thinking he was molesting Lanie. It is, of course, revealed that Lanie lied about this to cause a rift between Josie and their father. Her obsession with her sister Josie, coupled with a host of mental disorders (as described by her counselor) that Lanie suffered from, is the real cause of Chuck Buhrman’s death.

Though the two sisters pin the murder on their mother Erin, Lanie is then arrested for Erin’s subsequent murder, which she made to look like a suicide. The fate of Josie, who helps get her sister arrested, remains unknown. Left with no family except for her incarcerated sister and abandoned by her husband Caleb (who is scared away by Lanie’s lies), it is likely Josie will once again make a new identity for herself and try to move on from the traumatic experiences.

What Happens to Warren Cave?

After spending 19 years — more than half his life — in prison, Warren is finally released after Lanie and Josie tell the authorities that it was their mother that killed Chuck. It is not known whether he receives any compensation for the years he has lost in prison, but he does get to meet his mother before she passes away from cancer. Shortly before being let out of prison, when he fears that he will be killed, Warren also blacks out all the Nazi tattoos he has on his arms, essentially discarding any association he has with the Aryan Brotherhood. While removing the tattoos, he says that he’s doing it so that he may save his soul.

Read More: Best Shows Like Truth Be Told You Must See