12 Best Tsunami Movies of All Time 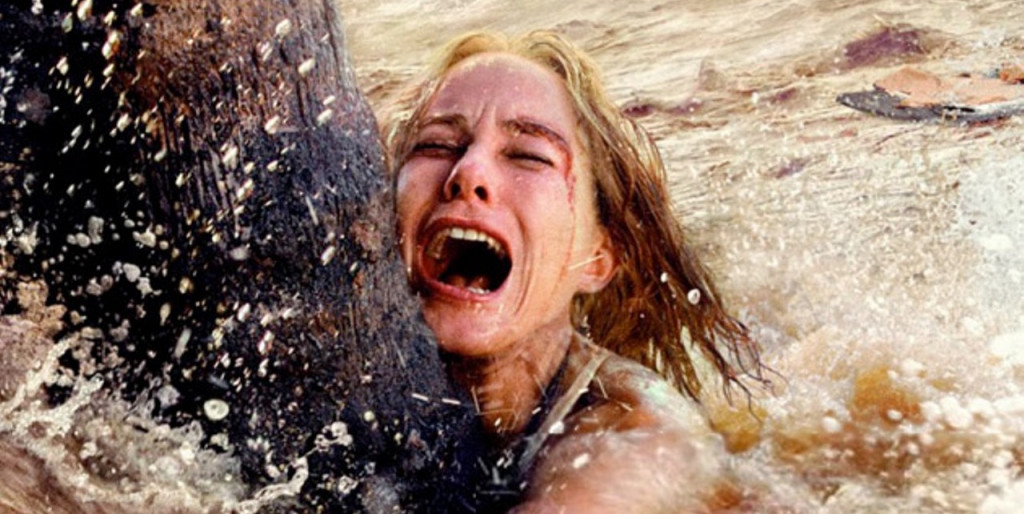 A 50-foot wave, tons of water, and a massive storm covering entire cities to the brim. Tsunamis leave nothing but death and destruction in their wake decimating not only real estate but also countless lives. The human spirit, however, has always been resilient and will continue to be. After the Indian Ocean catastrophe the Indian community built themselves up and as did the victims of Katrina.

Movies made on natural disasters and consequently tsunamis are always full of thrill, action, and an odd adrenaline rush. We have brought a list of films full of all these things and more. These movies based on Tsunamis go all the way from your run-of-the-mill disaster movies where people are trying to run away from a giant wave, all the way to ones like The Impossible which describes the aftermath of such a calamity. With that said, here’s the list of top Tsunami movies ever. You can watch many of these tsunami movies on Netflix, Hulu or Amazon Prime. 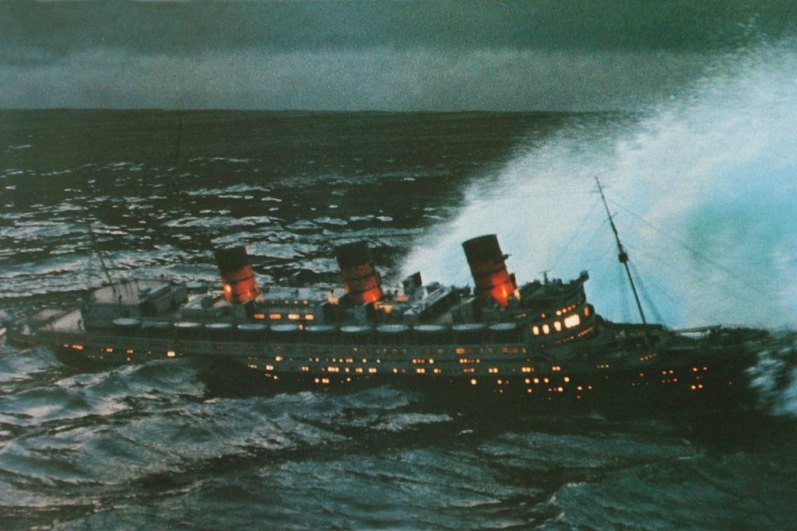 On New Year’s eve the cruise ship Poseidon is attacked by terrorists which leads to the vessel capsizing in the middle of the ocean and the travellers getting stuck inside it. Headed by a priest and a homeland agent, a group of survivors determined to survive are moving through to the bottom which is the new top. What they don’t know is that they don’t only have the water to fear. There is a mysterious and sinister force waiting to snuff them out. 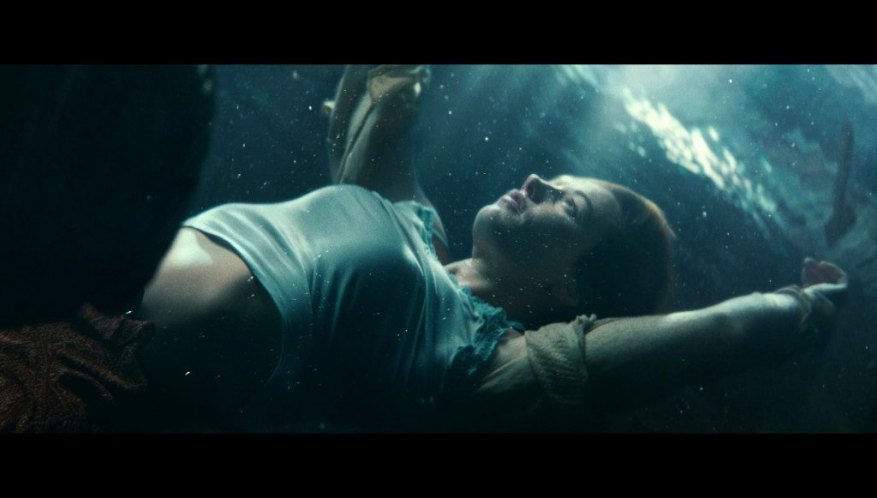 From Clint Eastwood we bring to you a different and eccentric take on mortality and how lives collide unknowingly in this strange world. On assignment in Thailand, French television journalist Marie Lelay has a near death experience during the 2004 Indian Ocean tsunami. Having drowned for a long time she is clinically dead before she is revived by rescuers. On the other side of the world Geroge a genuine psychic medium who can talk to spirits from the afterworld is trying to get rid of his legacy as a medium and lead a normal life. In yet another place Marcus a 12-year-old is trying to contact his dead twin brother for answers. Destiny sets these three strangers on a path which leads them up towards each other. What will happen when three people each dealing with near death experience in their own way cross paths? 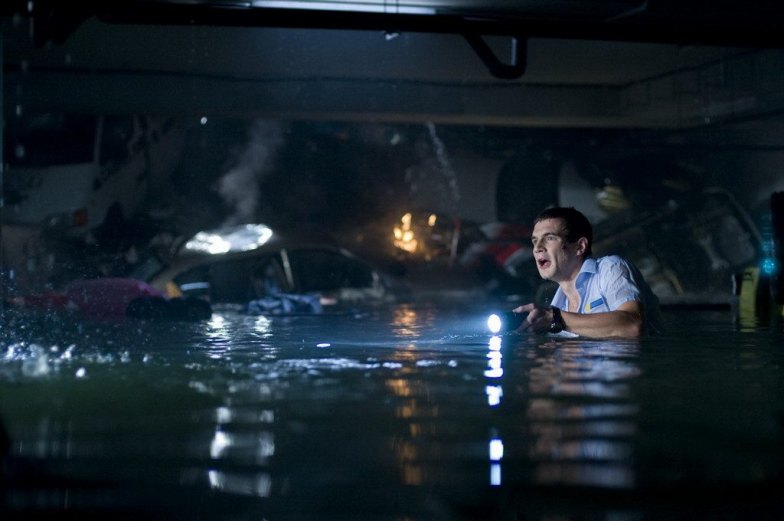 Well, if a tsunami wasn’t enough, we’ve got great white sharks also in this one. After a horrific tsunami hits the coast of Queensland, Australia a group of people get trapped inside a supermarket with no way to contact the outside world. If a flooded supermarket and an impending death wasn’t enough, now they also have another thing to worry about. A great white shark has entered the supermarket along with the flood water and now is thirsty for their blood. The only question which remains now is how would these unfortunate group of people like to die: drowned, electrocuted, or devoured by the hungry shark. 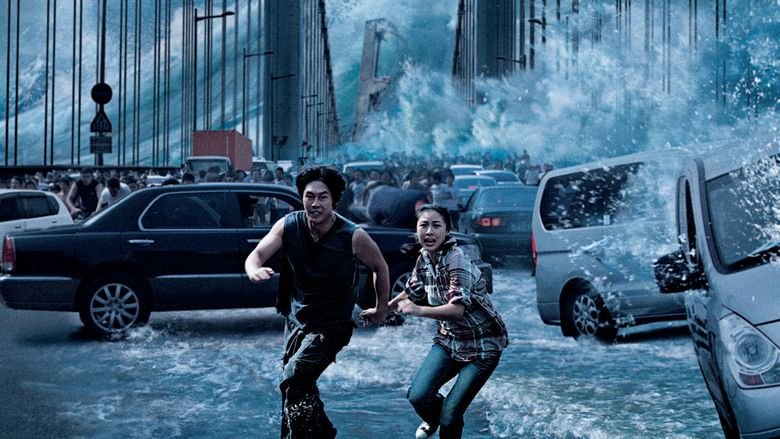 Professor Kim is a marine geologist who has just made a startling discovery. The Haeundae district of Busan located on the southern tip of Korea and a popular tourist destination with hundreds of beaches is about to be hit with a gargantuan tsunami. He tries to warn the authorities but is ignored and ridiculed. In between the mess, two couples of varied origins are stuck on a place about to be flooded by the impending storm. To save themselves and their loved ones, the group must follow their instincts and do what nobody has successfully done before: outrun a 50-foot wave.

The end of the world is here as predicted by the Mayan calendar. The human race is about to be wiped off the face of the earth by a massive earthquake and a humongous deluge that follows. In between everything a struggling writer Curtis and his family are trying to survive, and find out if they deserve to live in comparison to the wealthiest few of the planet. Watch as this unrelenting group attempts to race against time and rise unscathed from the disasters following in their wake. 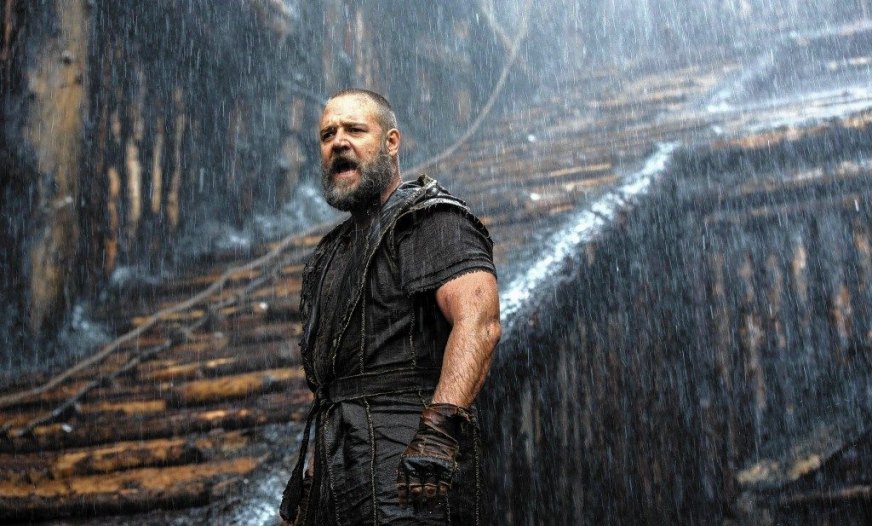 I thought a lot about including this movie in this list. Technically it’s not a tsunami movie, but if you don’t consider the great deluge in this list what will you consider? So here I am, winging it. Based on the biblical story of Noah and the great flood that swept across the entire world and drowned many civilizations, this movie is one of the better ones made on this story. The plot is based on the legendary tale where God came in the dream of Noah and told him that he is going to destroy humanity through a great flood and he should save ‘two of every animal kind’ to save the planet’s legacy. However, the task is not as easy as it seems on the surface. From dealing with naysayers and people who deny any existence of God, to managing his own family’s doubts, Noah has to jest towards his goal. His own suspicions and biases don’t help either, leading to an interesting climax. 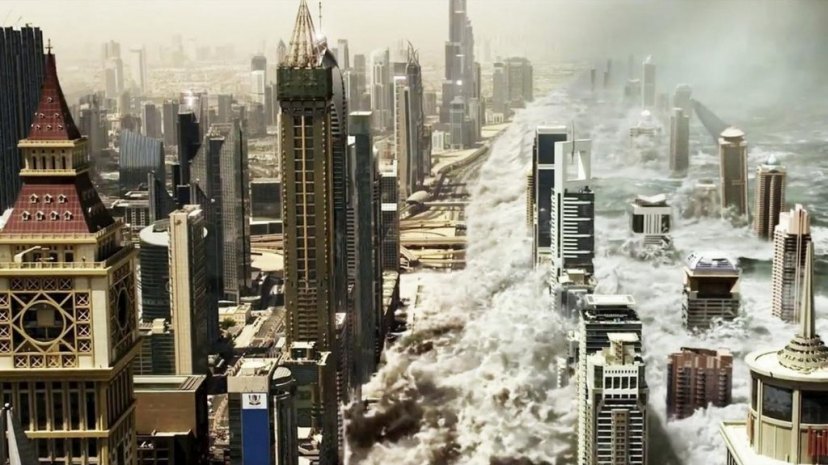 To neutralise the disastrous human impacts on the environment, the scientists came up with a brilliant plan. They put up in Earth’s orbit a group of satellites which have the capability to predict and avoid natural disasters. However, when the guardians become the destroyers, two brothers will have to rise to the occasion and repair the satellites before they themselves destroy the planet. 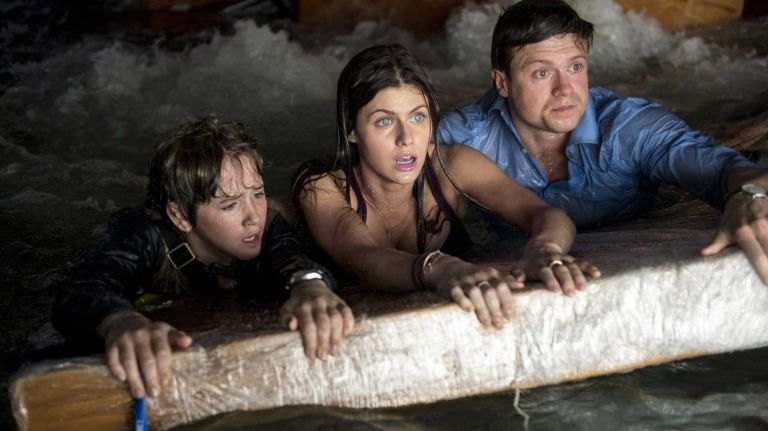 San Andreas, California is experiencing the biggest natural calamity earth has ever seen. Amidst the worst earthquake of humanity and 50-foot giant tidal waves, rescue pilot Ray is searching for his daughter Blake. Teamed up with him is his ex-wife and Blake’s mother, Emma. Despite their differences they have bonded to save their baby girl from a sure death, whatever it takes. On the other side of the drowned city, Blake and her two friends lie in wait for their saviours. Will they endure?

On New Year’s Eve around 2000 passengers are aboard the massive cruise liner Poseidon enjoying the revels of their life. Their joy doesn’t last long however as the ship capsizes in the middle of the North Atlantic Ocean. Now where everyone is struggling to survive, a group of people have decided not to wait for the rescue which might never come. As they try to get out to save themselves and their families from the cruel strike of death’s blade, death is tracing their steps. 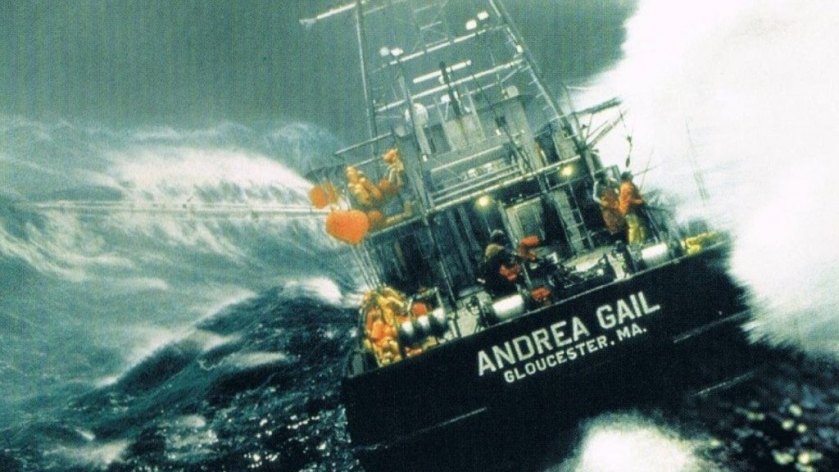 It’s October 1991, and a killer storm has risen in the North Atlantic. Unaware a fishing boat captain and his crew have waged into the harsh conditions for some fresh catch. However soon they realize that this rebellion against nature might cost them their lives. As they jest with nature which is bent on killing them, their loved ones wait for them at home with fear and longing. Fighting the relentless waves the captain and his lost crew must survive before they are drowned or starved. 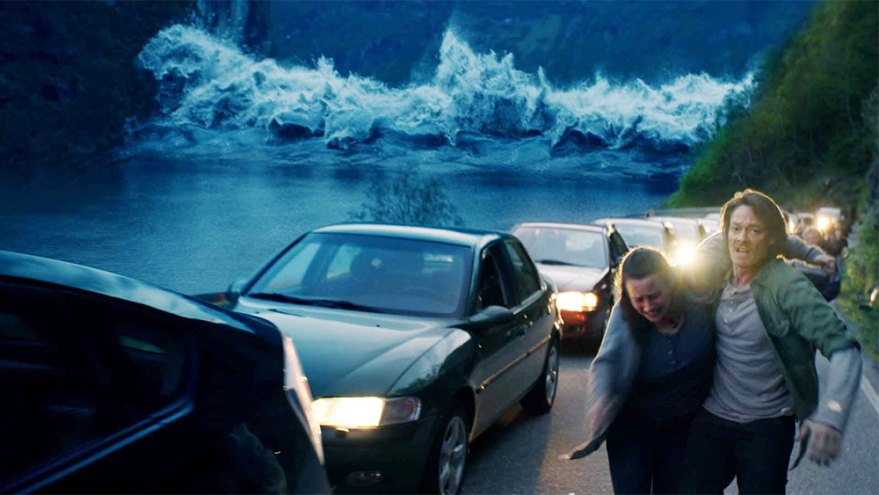 Located in the Geiranger fjord in Norway, Åkneset is a huge mountain pass which can any day become the cause of a big mountain disaster. Kristian Eikjord is a geologist who is moving away from Geiranger to Stavanger with his family. On the night of his farewell, his notices some strange events surrounding the pass but ignores them to be normal and inconsequential. However, while leaving the town, Kristian finally has an epiphany which leads him to believe that there will be an avalanche in the mountain pass. Just after he warns his colleagues, the avalanche strikes and an 80-foot tsunami engulfs the small hilly town. With only 10 minutes left to impact, Kristian and his family are trying to get to higher ground so that they can survive the oncoming deluge. Based on a true prediction that the Geiranger mountain pass can any time fail, this movie is a run for survival. 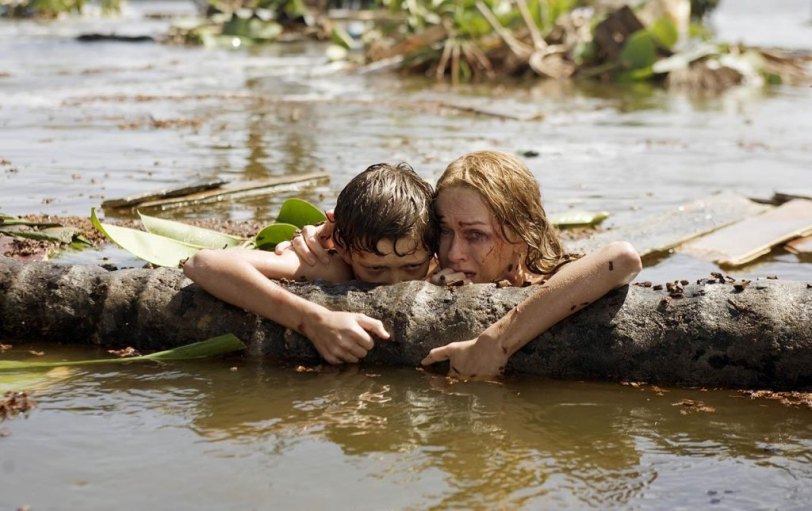 An average American couple and their two children are on holiday to Thailand on Christmas. A twist of fate lands them up in the middle of the Indian Ocean tsunami of 2004 which destroyed lives and countries alike. Separated from each other Maria and her elder son are searching for her husband and younger son hoping they are alive in the prevailing mayhem. Separately they are living their own hell and trying to come to terms with the destruction that has happened. Will the family be united again?