Update on SneakERASERS From Shark Tank 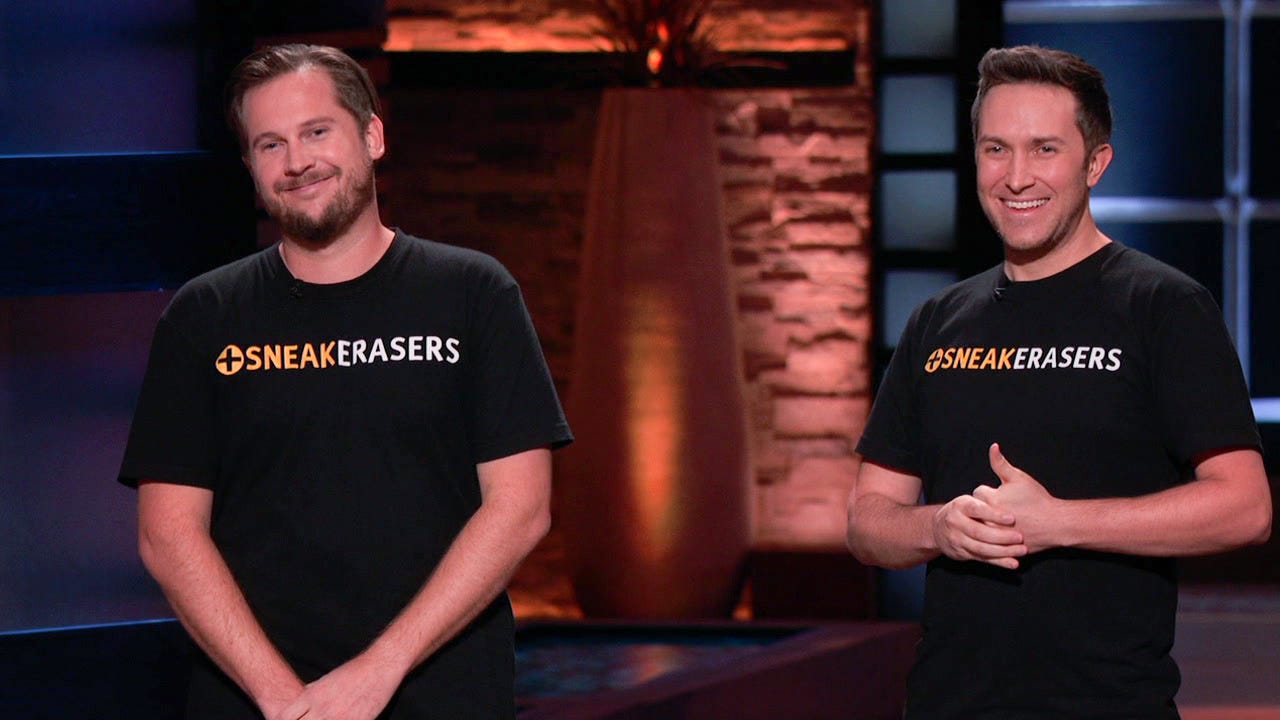 Inventors Chris and Kevin have a simple and effective solution to an everyday problem. On ‘Shark Tank’ season 12, they introduced the “Sharks” to SneakERASERS— convenient, reusable sponges pre-moistened with a cleaning solution to get your sneakers sparkling quickly and without any cumbersome equipment. Hoping to expand their already popular product even further, their pitch in episode 23 of the season was a compelling one and made us curious to get to know more about the growth of their product’s popularity. Here’s what’s been happening with SneakERASERS since the show!

SneakERASERS: Who Are They and What Do They Do?

SneakERASERS is the brainchild of Ohio natives Chris Pavlica and Kevin Consolo, who first met as students at Ohio University. Living just two doors apart in Tiffin Hall freshman year, they became acquainted through their mutual interest in golf. Sharing the dream of being business owners, Chris and Kevin moved in together on the ninth floor of Bromley Hall sophomore year. Despite spending many hours at the university trying to come up with a viable business idea, they ended up going their separate ways after graduation.

Chris went to Hollywood and began working in the film industry, while Kevin built a career in the beverage industry and gained experience in product retail strategies. The idea for SneakERASERS came about years later when Chris was late for an important meeting. Running out of time and finding his sneakers scuffed up, he struggled to find a quick and effective solution to making his shoes look new again. Right after his meeting, Chris called Kevin with his idea for their business.

The two, along with a friend Nick Wax, spent the next few months in Chris’ garage in Los Angeles perfecting their product and came up with what would eventually become SneakERASERS. Originally called Sole Rubbers, their product is a pre-moistened dual-sided cleaner that’s versatile and convenient. Right from the get-go, they started getting encouraging feedback from shoe stores that tried out their product.

According to Kevin, like the range of products available for the care of leather shoes, their product is one for sneaker-care. It uses a simple solution with a small amount of alcohol and water and basically performs the function of a much more cumbersome brush kit. The dual-sided sponge offers a scrubber to remove scuff marks and stains on one side and a soft surface on the other to wipe away any residue and leave the shoe looking new. The sponges come in a pre-moistened as well as a dry “just-add-water” variety.

SneakERASERS: Where Are They Now?

Since debuting the SneakERASER at a trade show in Los Angeles years ago, Chris and Kevin have come a long way. Two years after its launch, they bagged their first deal with a retail chain in 2018, significantly boosting their visibility. The Harris Teeter chain of upscale supermarkets agreed to stock their product in over 200 of their outlets. The two used this opportunity to refresh their branding and also renamed their product from Sole Rubbers to SneakERASERS.

From brick and mortar, their online success wasn’t far behind, and after being featured on The Zoe Report, an online fashion platform, their Amazon sales began to shoot up as well. SneakERASERS then got its next big boost in 2019, when Chris and Kevin won a nationwide Walmart competition to become only a handful out of the 10,000 applicants to have their products stocked at 1,000 Walmart stores. They were also featured on the retail giant’s social media pages. With the massive momentum they got from Walmart, Kevin was soon able to secure a meeting with Costco.

A few months later, SneakERASERS were available in club packs at Costco outlets. Just within 2019, the innovative cleaning accessory had expanded from 200 stores to over 30000! The next year saw Chris and Kevin’s company FTI (Free To Innovate) release two more cleaning accessories, one for cars called AutoERASERS and another for golf equipment called GolfERASERS. These products were released in January 2020 at the ECRM Trade Show and a few months later were featured on ABC’s ‘Good Morning America.’

Soon after, AutoERASERS was picked up by Camping World, one of the country’s top RV dealerships, to be stocked at their outlets. SneakERASERS are now available in over 35,000 outlets, including retail chains like Walmart, CVS, Kroger, and Golf Town, as well as online on Amazon, Walmart, and Kroger Ship. They were also featured on a limited-time event on the e-commerce platform Zulily. The innovative cleaning scrubbers are available at different prices at different outlets and cost approximately $10 for a pack of 3 sponges, $14.49 for a pack of 5, and $34.49 for a pack of 14.