What Does the JTP Mean in The Goldbergs? Are They Based on Real People?

Created by Adam F. Goldberg, ABC’s ‘The Goldbergs’ is a period sitcom series. It is inspired by Goldberg’s youth in the 1980s in Jenkintown, a suburb near Philadelphia, Pennsylvania. The plot encompasses Goldberg’s friends and family, his budding love for cinema, and his journey to adulthood. Among various characters in the series, the group known as the JTP has become a prominent part of the plot. Here is everything you need to know about them. SPOILERS AHEAD.

What Does JTP Mean in The Goldbergs?

JTP is an acronym for the Jenkintown Posse. At present, the group comprises Geoff Schwartz or Madman Schwartz (Sam Lerner), Rob Smith or Naked Rob (Noah Munck), Andy Cogan or the Ladies’ Man (Matt Bush), and Matt Bradley or Matty Ice (Shayne Topp), with Barry Goldberg or Big Tasty (Troy Gentile) serving as its leader. In season 2 episode 15, ‘Happy Mom, Happy Life,’ Erica Goldberg or Big E (Hayley Orrantia) becomes a temporary member of the group, leading their effort to draw Barry and Lainey’s attention. In season 4 episode 17, titled Deadheads,’ Matthew Bradley joins the JTP. Adam was also briefly part of the JTP under the nickname Ad-Rock. In the season 1 finale of ‘Schooled,’ the spin-off series about Lainey Lewis set in the 1990s, Charlie Brown, or C.B. becomes a member of the JTP when he helps Barry with his on-again, off-again relationship with Lainey. 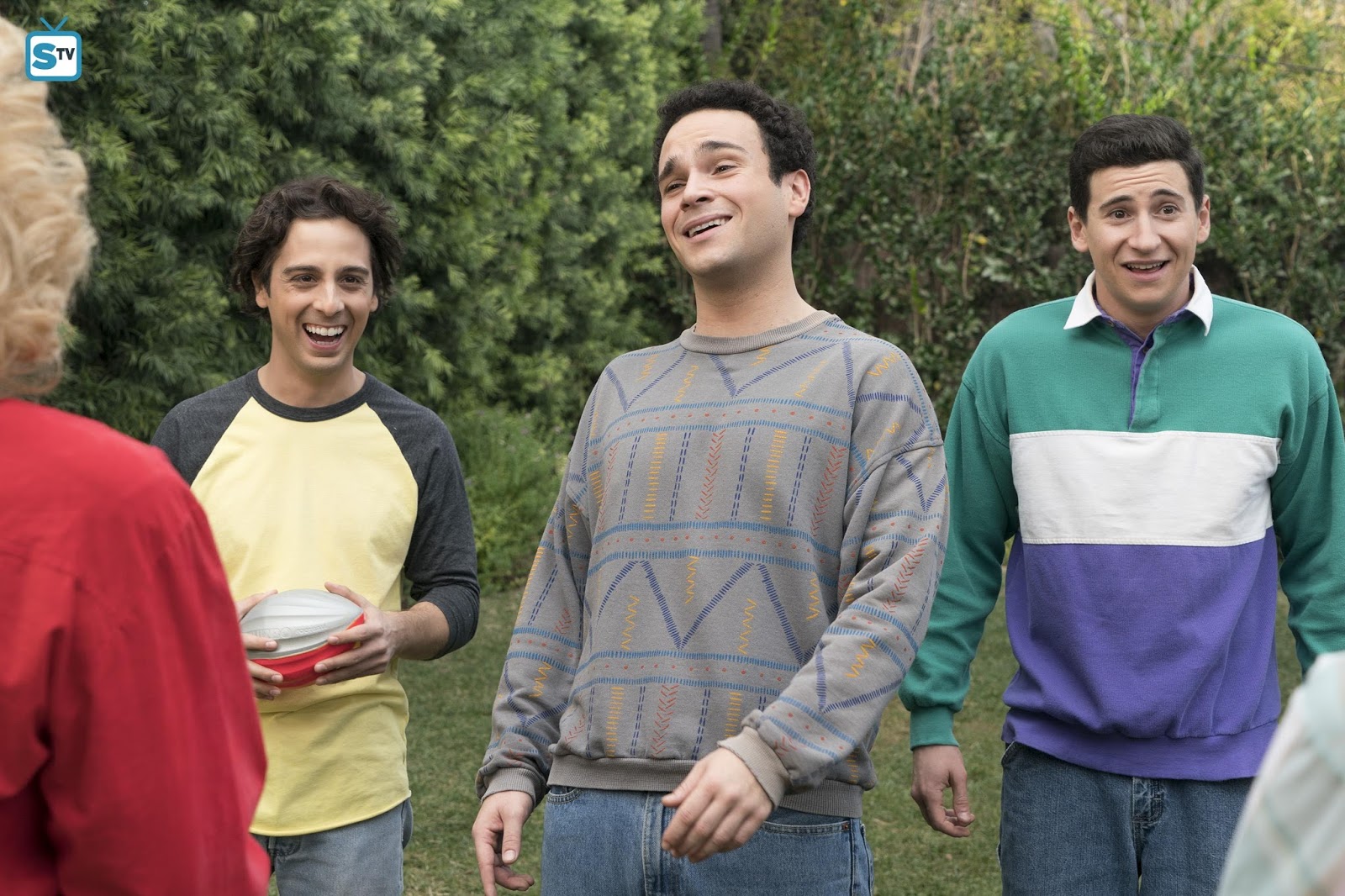 The JTP continues to be a prominent component of the narrative in ‘The Goldbergs’ 10th season. They are still the executors of Barry’s various eccentric plans, often serving as the voices of reason in the dynamic. Over the seasons, a relationship has developed between Geoff and Erica. In season 10, they are married and have a daughter together. The more Geoff has become involved with Erica and their stories have merged, the less he has been part of the JTP storyline.

Are the JTP Based on Real People?

As mentioned above, ‘The Goldbergs’ is based on Adam F. Goldberg’s childhood, so the characters we see in the show are almost all based on real people, including the JTP. In Season 5 episode 14, titled ‘Hail Barry,’ the real-life members of the Jenkintown Posse — Barry Goldberg, Geoff Schwartz, Andy Cogan, Matt Bradley, and Rob Smith — make a camo appearance, playing football against their on-screen counterparts in a competition called the JTP Bowl and even winning the game. The real JTP members again appear later in the season, where they speak about their show counterparts and the actors that portray them. 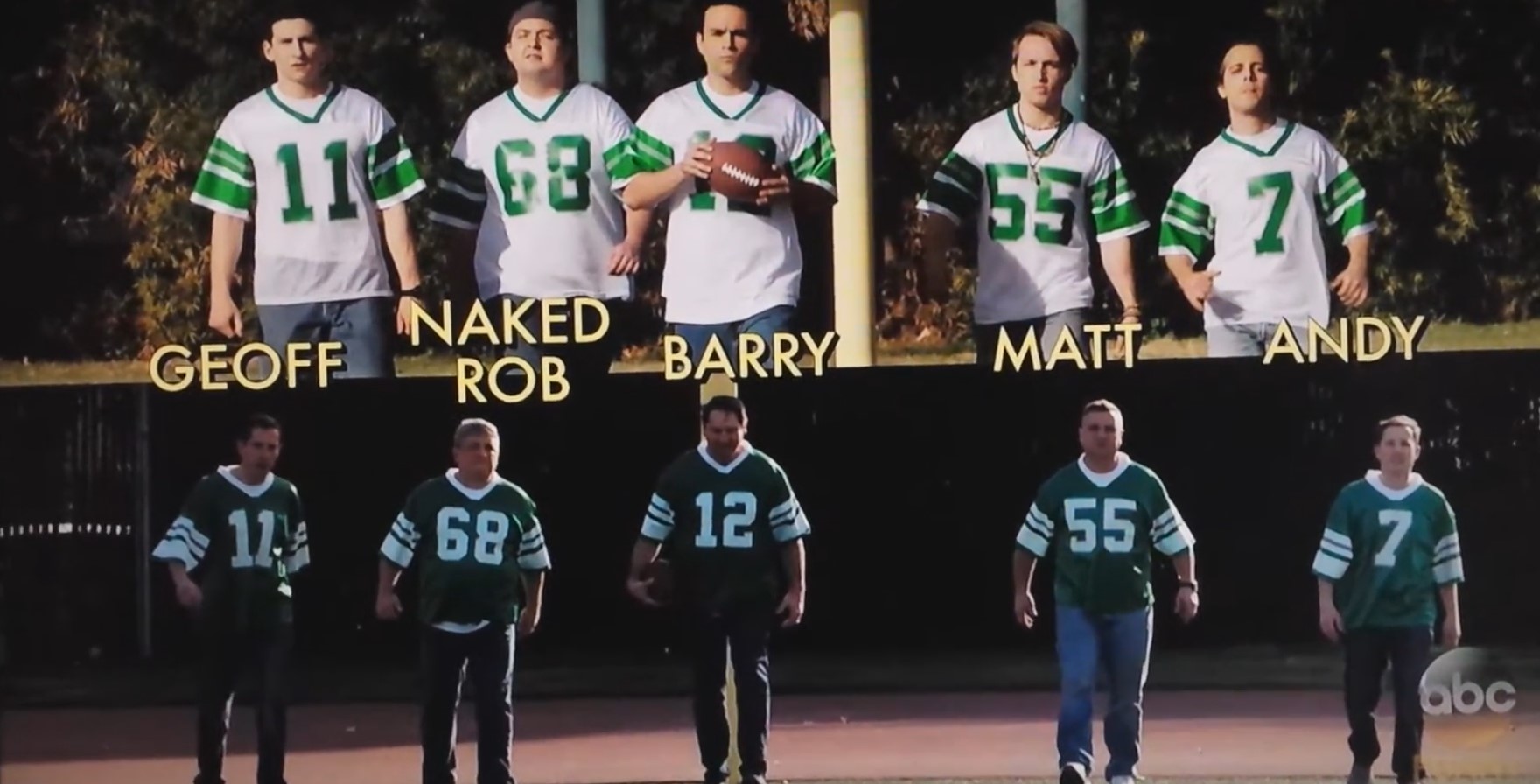 Lerner revealed in an interview with TV Insider that he is Facebook friends with the real Geoff Schwartz, who is an ophthalmologist, and his wife. He told The Nerds of Color how it was to play the JTP for him and his co-stars behind the scenes. “Oh, it’s awesome. I mean, like I said, we started the show so long ago, so we’ve become really good friends over the years and just getting to be like complete idiots is really fun. When we get to kind of like answer back right on top of each other, I feel like we have pretty natural chemistry because we’re such good friends now and I don’t know, the JTP are just hilarious. They’re boneheads, they’re always having a good time with something. It’s super fun to play around with Matt, Noah, Shayne, and Troy,” Lerner said.

Read More: Is Flo from Progressive on The Goldbergs?