What Happened to Brookelyn Farthing? Is She Dead or Alive? 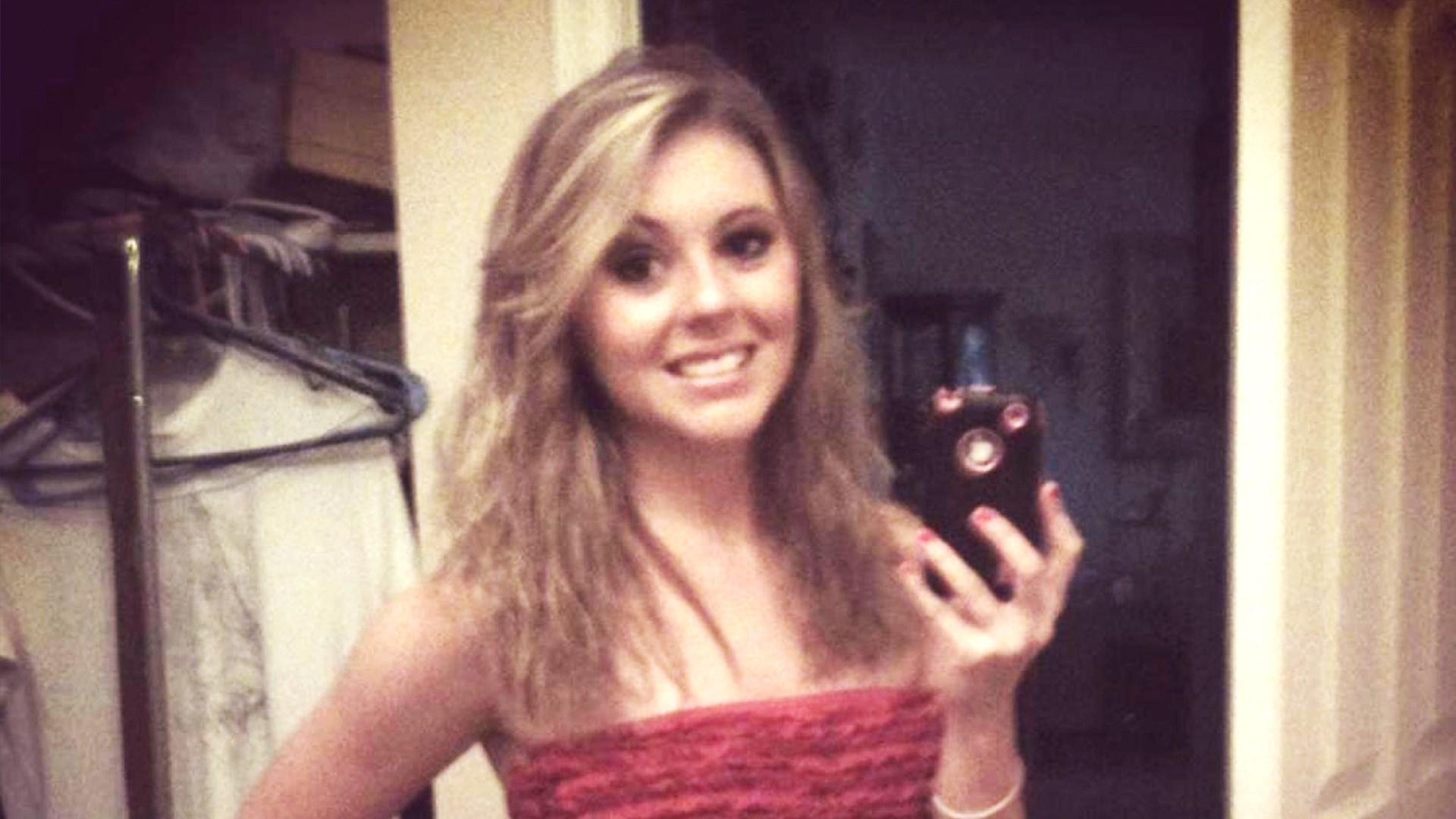 Brookelyn Farthing vanished into thin air in a mysterious turn of events after spending the night with a man she met at a party. She was never seen or heard from again after sending a series of texts in which she said she was scared. The house Brookelyn was in was found to be set on fire, and there was no sign of the girl or her cell phone. Investigation Discovery’s ‘Still a Mystery: The Dangerous Houses’ details this curious case and chronicles the ensuing police investigation in search of the missing girl. If this case piques your interest and you want to know if Brookelyn was ever found, we have got you covered.

What Happened to Brookelyn Farthing?

At the time of her disappearance, Brookelyn was just 18 years old and lived in Berea, Kentucky, with her mother Shelby Tillery, her step-father Randall Walker, and her two sisters, Tasha Thomas and Paige Farthing. A graduate of Madison Southern High School, she was last seen in the early morning of June 22, 2013, at a friend’s house in the 100 block of Dillion Court in Berea, Kentucky. Fondly remembered by her mother as someone who loved sweets and baking, she was also a girl scout and made kits for those affected by Hurricane Katrina.

On June 21, the previous night, Brookelyn attended a party at the same house with her sister, a cousin, and some friends. After partying for some time, the girls she was with decided to leave. They did not find it suspicious when Brookelyn chose to stay back as she had another friend at the party. This friend was supposed to give Brookelyn a ride home later that night.

However, that changed when they got into a small fight that seemed to be about a boy. The friend then left without Brookelyn. Towards the end of the party, another of her friends needed a ride home. Brookelyn was spotted by witnesses entering a car with this friend and Joshua Hensley, a man she met at the party (Joshua was later revealed to be her ex-fiancé’s friend).

Shortly after, they dropped her friend off and returned to Joshua’s house. At around 4:00 am the next morning, Brookelyn called her sister Paige and asked her to come to pick her up, but Paige, being drunk, could not do so. Brookelyn then started texting other people to pick her up. Her friends received several texts, as did her ex-fiancé, who was still on good terms with her. She texted her ex to pick her up after he finished working, and at around 4:26 am, she texted him again to hurry as she was scared.

The last text that her ex received was at 5:30 am, saying,”Never mind, I’m okay. I’m going to a party in Rockcastle County.” Her ex asked her who she was going with, but she never responded. Joshua affirmed that Brookelyn stayed at his house. He said that he had last seen her that morning, sitting on the couch and smoking, before he went out to tend to a horse. When Joshua returned home at 7:00 am that morning, he found his house on fire and Brookelyn missing.

The blaze was extinguished before the house was destroyed, and authorities found Brookelyn’s belongings inside, including her cowboy boots and some clothing items. There was no sign of Brookelyn or her cell phone. Investigators determined that the fire had originated from the couch and had burned a hole in the floor. The police also found out that Joshua was in the process of moving out, and his house was in foreclosure. As a result, electricity and other utilities were cut off for a while before the disappearance.

To this date, there has been no news about Brookelyn’s whereabouts. She is still missing, and the police have reportedly changed her status to an endangered missing person. The fire in Joshua’s house was ruled to be suspicious, and the police conducted large-scale searches in the Red Lick area. Cadaver dogs were used to comb through the nearby area, and divers searched the nearby bodies of water. 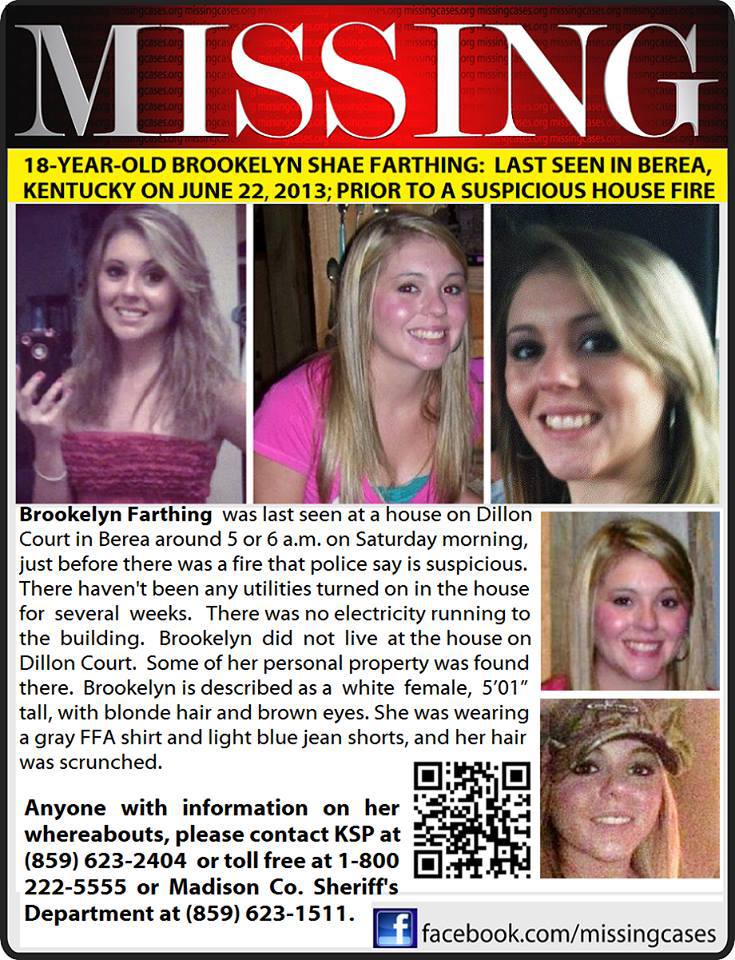 Huge groups of people also navigated through the woods surrounding the house, searching for Brookelyn, but there was no news of her. By July, searches for Brookelyn were called off. Along with the police, her family appealed to the community for any information regarding the missing teen. They are even offering a $14,000 reward for any information that would lead to Brookelyn’s safe return.

Is Brookelyn Farthing Dead or Alive?

As Brookelyn was never found, her current status is presently unknown to the public. Even though the police have not named any persons of interest or suspects in the case, they say that it remains an open and active investigation. According to police and arson investigators, the fire should not have started as it did and is suspicious because it’s uncommon for a fire to start without electricity.

Her family fears that she might be the victim of foul play. They claim that the fire was set off to distract people and that it was implausible for Brookelyn to leave her clothes and belongings behind in the house. Brookelyn’s mother suspects that Joshua Hensley knows more about her daughter’s disappearance than he let on and wanted to question him when the police arrested him on an unrelated charge. Even though the case is still unsolved, her family keeps hoping and praying for Brookelyn’s safe return.

Read More: What Happened to Lauren Dumolo and Sophie Reeder?