What is Dimitri and Ashley Snowden’s Net Worth?

Dimitri and Ashley Snowden rose to prominence through TLC hit reality series ‘Seeking Sister Wife’ that follows different polygamous families who are practically exploring the idea of a plural household. The couple has been together for more than a decade, and it is interesting that their polygamous lifestyle is not influenced by religious or cultural beliefs but by their desire to have a bigger family. The couple has so far featured on all the seasons of ‘Seeking Sister Wife’ and earned a huge social media following by impressing the viewers.

Their beliefs may sound interesting to some, while others may find them to be bizarre, but despite that, they have managed to intrigue a significant American population who might want to know how much they have earned so far through the show and in their entire career. But before we get to that, let’s have an overview of their career so far.

How Did Dimitri and Ashley Snowden Make Their Money?

Born in Buffalo, New York, Dimitri Snowden is an ontological architect and is an expert in the fusion of human behavior with technology. Using his unique approach to design by incorporating ethnographic studies along with ontology, he has managed to help corporations, advertising agencies, small businesses, and television networks. In short, he designs bespoke experiences.

Dimitri’s mother was a humanitarian, while his father a Vietnamese veteran. His early life was plagued with emotional adversity, but he managed to get through it all with his never-give-up attitude. It was his insatiable desire to learn more that helped him become a self-taught computer programmer. Due to financial troubles, he had to drop out of college, but that was never a hindrance in his education.

He studied noetic sciences, quantum mechanics, robotics, and other fields. As an autodidact, Dimitri has not only taught himself all he needs to know but also invented several services and products. The long-list includes AWSM robot, Hypervolt, Kofax Analytics for capture, and Kofax Analytics for mobile. He is also the man behind the lithium-ion AA micro USB rechargeable battery. He now lives in Los Angeles with his children and partner, Ashley Snowden. 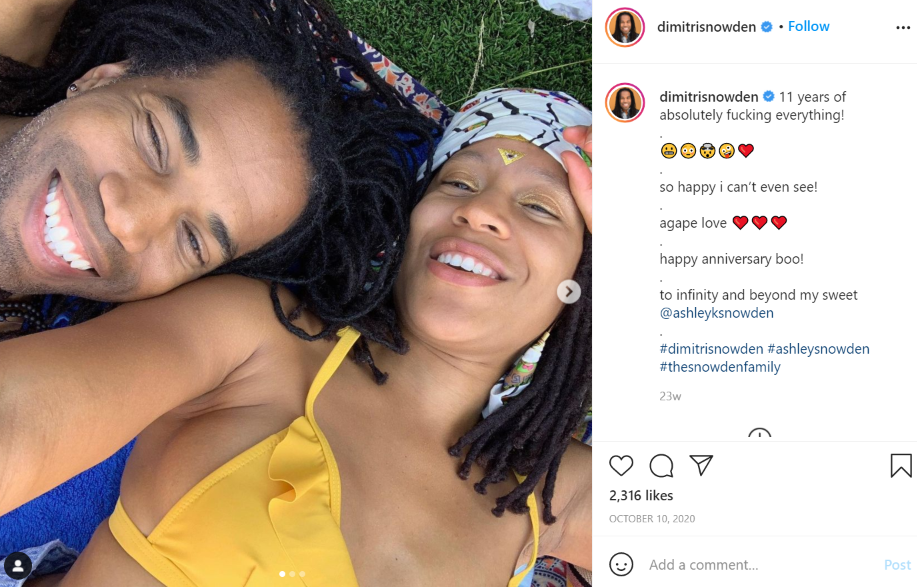 Ashley Snowden is a reality television celebrity, dancer, and singer. She is an environmentalist who is very vocal about the need to protect our oceans and the planet. She rose to prominence with her partner Dimitri in 2017 when they were offered an opportunity to star in the hit series ‘Seeking Sister Wife.’ The couple grabbed the opportunity with both hands and went on to make an appearance in every season.

On the show, Ashley has shown support for Dimitri’s desire to have relationships with multiple partners, as the couple wants to have a big family. Together, they have earned a significant sum of money over the years. Now that we have an overview of their career, let’s look at their net worth.

Dimitri and Ashley Snowden’s Net Worth

Dimitri and Ashley Snowden have an estimated combined net worth of around $1 million. The couple continues to be active in the television industry, with a reasonable possibility of future offers for more shows. So, we can presume that their net worth is likely to inflate in the coming years.

Read More: What is Waka and Tammy’s Net Worth?